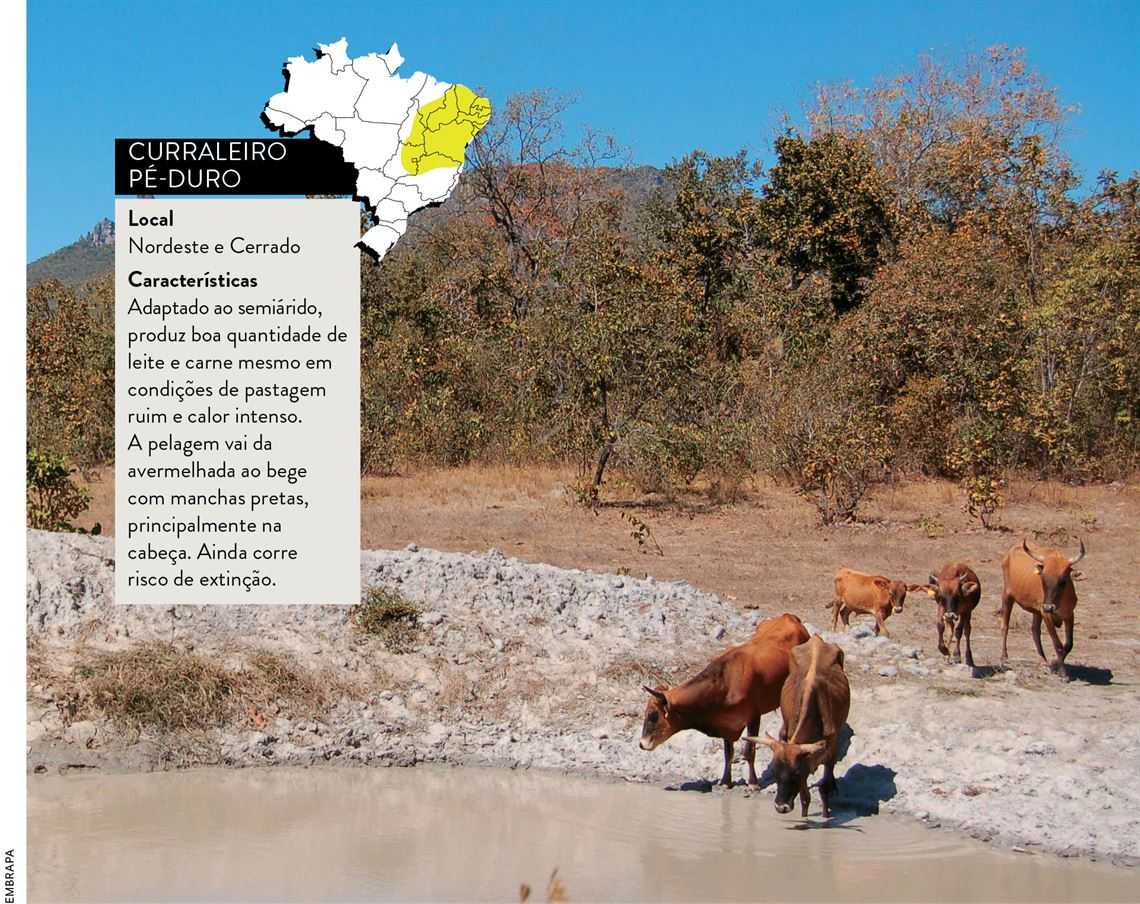 The Curraleiro Pé-duro withstands the rough ground of the sertão (badlands) of the Northeast, a breed developed in a region where water and pasture are scarce and the soil is rocky. It does not descend from Zebu cattle like the Nelore, the breed which is most numerous in Brazil’s herds and is native to India, a country with climate and environmental conditions similar to those of Brazil. The Curraleiro was developed from Portuguese and Spanish breeds that began to arrive in the country when colonization started in 1534. Over time, these animals have lived out in the fields and undergone the same selective pressures of this environment, resulting in a type of cattle which is better adapted to the diseases and warm climate of the Northeast and also the Cerrado region where settlers introduced it.

The genetics of the Curraleiro and three other Brazilian breeds of European origin that have gone through the same process (the Caracu, Pantaneiro, and Crioula Lageana) are the object of study for several groups of researchers. In addition to conserving the genetic heritage of these breeds, the scientists want to understand the biological mechanisms that allowed these animals to survive in Brazil’s climate and pastures.

The Brazilian herd contains 218 million heads of cattle, according to data for 2016 from the Brazilian Institute of Geography and Statistics (IBGE). About 80% of the total are Zebu-type, which include the Nelore, Gyr, and Guzerat breeds, as well as other types originating in Asia. The remaining 20% are taurine cattle of European origin, which include breeds such as Angus, Holstein, Simmental, Charolais, and a number of others. The Brazilian breeds fit within this group.

The European-derived breeds which were developed in the country have adaptive traits similar to Zebu-type cattle. The Zebus gained ground because of their greater resistance to heat, diseases, and the pastures in relation to European varieties. However, Zebu meat is less tender and juicy than beef from the European breeds. The problem is that taurine cattle suffer heat stress and do not produce good yields on low-quality pastures.

Since 2005, the four Brazilian breeds have been genetically identified using microsatellite markers, which are short sequences of genome repetitions found within a species that allow the genetic variation of a population to be studied. The breeds are characterized by physical aspects, although the Brazilian varieties are similar. It was possible to genetically trace the distance between each breed and their relationship with other European and Zebu breeds. These studies were conducted by researchers from EMBRAPA and the University of Brasília (UNB), the Federal University of Goiás (UFG), and the University of Cordoba in Spain. They demonstrated the uniqueness of the populations as well as the great genetic variability within them, which favors expansion and crosses between individuals. Now, besides moving Brazilian breeds away from the brink of extinction, the research groups are identifying the genes linked to certain characteristics in order to make this genetic wealth available for domestic ranching.

“There are several studies that are looking for scientific evidence of resistance to diseases and parasites, as well as the heat tolerance of these taurine cattle breeds adapted to the tropical climate,” says veterinarian Andréa Alves do Egito, a researcher from EMBRAPA Beef in Campo Grande, Mato Grosso do Sul, who participated in the genetic identification of the four breeds. Taurine cattle belong to the variety Bos taurus taurus, while Zebu-type cattle are Bos taurus indicus, distinguished by the hump on their back.

“We are looking for genetic sequences related to the adaptability of these populations to our environment that can be incorporated into other commercial breeds.” For Egito, if a region in the DNA related to heat resistance is found, for example, this allele (alternative forms of the same gene) can be introduced into other populations. “Assisted reproduction and reproductive biotechnology can incorporate these alleles into other herds or breeds,” she says.

Another potential application of knowledge about the Brazilian breeds is their use for breeding and supply of semen. A common practice in animal husbandry is forming groups of animals with what is known as heterosis, or hybrid vigor. Crossing two genetically distant breeds generates offspring with better performance than the average of the parents; the greater the genetic difference, the better the result. Crossing a Nelore bull with a cow from a Brazilian breed can produce offspring that is hardier in terms of disease resistance and climate adaptation than the two parent breeds.

The relationship between genes and inherited characteristics, as well as the identification and conservation of potential herds in the sertão, Cerrado, and Pantanal regions of Brazil has been ongoing for more than four years in a study by the Pró-Centro-Oeste Network maintained by the Brazilian National Council for Scientific and Technological Development (CNPq) and coordinated by the veterinarian Maria Clorinda Soares Fioravanti, a professor at UFG. The network brings together researchers from EMBRAPA and the Federal Universities of Mato Grosso (UFMT), Mato Grosso do Sul (UFMS), Brasília (UNB), the State University of Mato Grosso do Sul (UEMS), and the Catholic University of Goiás (PUC).

One of the studies addresses the Curraleiro’s immunity to poisoning from the most common toxic plant found in Brazilian pastures, Palicoureia marcgravii. Animals that eat it die within a few hours. The study showed that Curraleiro Pé-duro cattle are more resistant to this plant. In 2015, six Curraleiros, six Nelores, and six Pantaneiros were fed the toxic plant. The Nelores died within three days and the Pantaneiros in 24 hours (this plant does not exist in the Pantanal region, but originates in the Atlantic Forest and Cerrado). Three of the Curraleiros died and three survived. “The fact that three survived leads us to look for answers in the genetic or physiological characteristics of these animals to learn what allowed them to survive this plant,” says Fioravanti.

Registration and geographical identification
Fioravanti was among those responsible for registering the Curraleiro Pé-duro breed with the Brazilian Ministry of Agriculture, Livestock and Food Supply (MAPA) in 2012. “They did not want to register [the breed], they said there was no commercial interest. But we visited the Northeast and Cerrado and counted nearly 10,000 animals.” The Curraleiro has also proven suitable for producing both beef and milk. “When Curraleiro cows are milked, they produce an average of 10 liters [l] of milk per day, while the Nelore, which is specialized for beef, reaches to 3 to 4 l,” says animal technician Geraldo Magela Pereira, curator of the Curraleiro Breed Center at EMBRAPA Mid-North in Teresina, Piauí.

Among the four Brazilian cattle breeds, the only one which has not been registered with MAPA is the Pantaneiro. The Crioula Lageana was registered in 2008, and the Caracu in the 1980s. “Registration lends value to the breed and transforms it into a product, permitting the sale of semen and embryos,” says veterinarian Raquel Soares Juliano of EMBRAPA Pantanal in Corumbá, Mato Grosso do Sul, curator of the Pantaneiro breed preservation unit. “This is the breed that faces the greatest risk of extinction. We have approximately 150 animals on our experimental farm, and the entire herd, including those belonging to breeders, is between 500 and 600 animals,” says Juliano, who is also secretary-general of the Association of Pantaneiro Breeders. “We monitor the herds, confirming if there is genetic variability, and also help form a germplasm [semen and embryo] bank.”

The Caracu is the only breed that does not face the risk of extinction today, with more than 20,000 individuals in the country. Since 1976, the Zootechnical Institute (IZ) in the state of São Paulo, in Sertãozinho, has had a preservation and improvement program that looked for individuals in Paraná and Minas Gerais to increase the population and prevent the disappearance of the breed. Caracu cattle were widely used at the beginning of the last century, but like all local breeds, began to disappear with the entrance of Zebu cattle, especially in the 1940s. “When we compare them with Nelores, we see that the Caracu has a larger loin area and softer meat, as well as greater body weight,” explains animal technician Maria Eugenia Mercadante, a researcher at IZ.

“We have a herd of 250 animals, mostly the polled variety [without horns], which are preferred by ranchers because they are easier to handle than the animals with horns,” says agronomist Roberto Torres of EMBRAPA Beef, who cares for the EMBRAPA Caracu herd. Bulls of this breed are used often to breed with Nelore cows and transfer characteristics like better weight gain and softer meat to the offspring.

Good adaptation to the environment and soft beef are also characteristics of the Crioula Lageana breed, which developed in the south of the country and withstood periods of heat and cold. It was initially recovered by EMBRAPA Genetic Resources and Biotechnology of Brasília, which began surveying Brazilian breeds in 1984. “The Lageana survived thanks to two breeders in Lages, Santa Catarina. There were about 500 animals; today we already have 3,000,” states veterinarian Edison Martins, executive secretary of the Brazilian Association of Crioula Lageana Breeders (ABCCL). “These animals adapted to pastures in southern Brazil, resist parasites, and have very short fur, as well as soft and succulent meat,” says Martins.

The quality of the meat is the greatest asset of the Brazilian breeds. A survey conducted by Pró-Centro-Oeste Network evaluated purchasing preferences for Curraleiro and Pantaneiro beef in 347 consumers in Campo Grande. Most people were not familiar with the breeds, but when they were explained, 75% of consumers said they would buy this meat, and 62% would be willing to pay more for it. “Sales of the meat from these animals is a good strategy to help preserve local breeds like the Pantaneiro and Curraleiro,” concludes economist André Steffens Moraes, coordinator of the research conducted at EMBRAPA Pantanal.