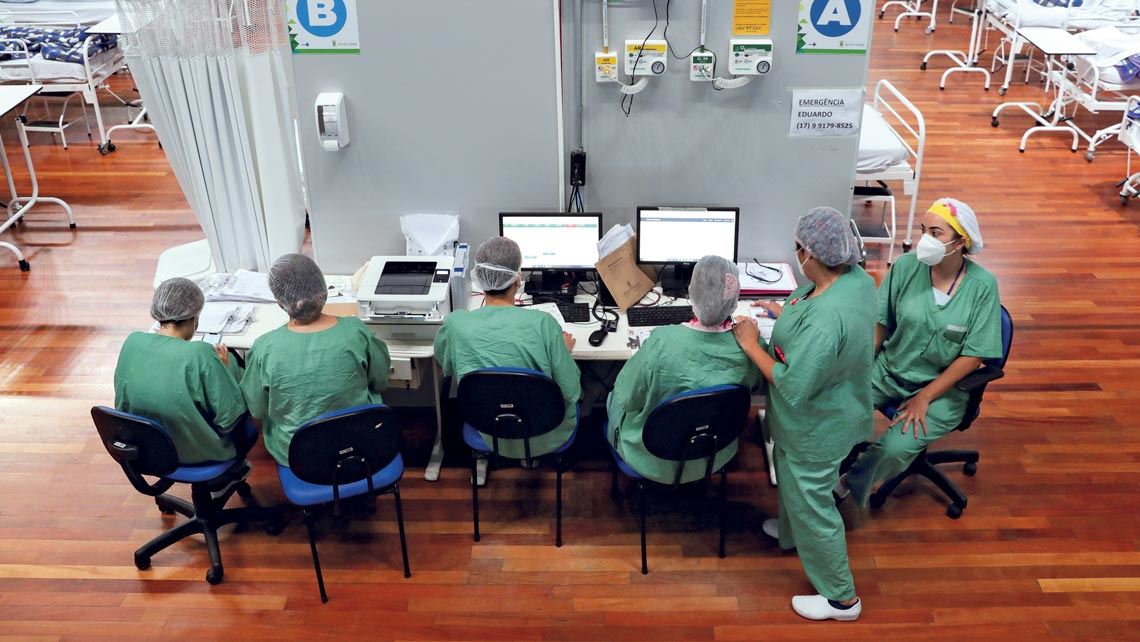 Most workers on the front line during the current pandemic are women. They are the majority among nurses and supermarket cashiers. Among the economically disadvantaged in particular, they are almost always the ones dealing with the impact of school closures on their children, taking care of sick relatives, losing jobs, and suffering from the increase in domestic violence. This is the conclusion of a group of scientists who formed the Brazilian Network of Women Scientists at the end of April with the aim of looking beyond academia. The group has already started to produce technical documents, available online, to inform and challenge the public authorities.

Political scientists Vanessa Elias de Oliveira, from the Federal University of ABC (UFABC), and Luciana Tatagiba, from the University of Campinas (UNICAMP), are among the network’s founders. “It started with a conversation between colleagues about our discomfort with the current lack of action,” says Oliveira, who specializes in the judicialization of public policies. Tatagiba studies public participation and social movements. Neither, however, focus on women’s issues, despite having coedited the book Mulheres, poder e ciência política: Debates e trajetórias (Women, power and political science: debates and trajectories), published by UNICAMP in 2020. But when they organized a telephone conference call with 10 more researchers on a Friday night in mid-April to discuss how they could utilize their academic knowledge to inform public policy and defend the most vulnerable, it became clear that the entire group had one thing in common: they were all female scientists.

After the first meeting, the group spent the weekend working on a charter defining the movement, which was released on Monday, April 19. The movement started in May with more than 3,800 signatories, bringing together researchers from a variety of fields and locations—all hoping to contribute in some way. Graphic designer Rafaella Peres, a professor at the Federal University of Mato Grosso do Sul, voluntarily created a logo for the network, emphasizing the unison, diversity, and integration of major fields of knowledge. “It almost seemed like the network already existed, it just needed somebody to make it happen,” says Tatagiba, referring to the enthusiasm of the participants and the amount of help offered.

“It’s a brilliant idea, perfect for this moment in time, due to its multidisciplinary character,” says UNICAMP philosopher Yara Frateschi, who is a member of the network. Since 2019, she has been working with the Brazilian Network of Women Philosophers, which seeks to tackle the gender imbalance in the discipline. “Women represent just 24% of the philosophy community.” She believes the networks are useful for raising awareness of projects and stimulating debate. They offer scientific benefits by allowing research results to be more widely shared, and political and institutional advantages because they “help us find better solutions to gender issues by taking different perspectives into account.”

One challenge facing the executive committee of the new network is to find ways of managing the enthusiastic array of scientists flooding the WhatsApp group with ideas. “We are going to have weekly proposals, creating working subgroups along the six axes that we outlined in the letter: health, violence, education, social assistance and food security, work and employment, and housing and mobility,” says Oliveira. “The network members are already generating knowledge; our challenge is to utilize it.” One current objective is to gather knowledge produced by the network and assemble a report to support debates by the ongoing COVID-19 Parliamentary Inquiry (CPI) in Brazilian congress. The group’s website includes a form that can be filled in by anyone who believes their work can contribute.

In the future, the unification of human, natural, and exact sciences could give rise to new research ideas. “The confluence of these three major fields is historical,” says Tatagiba. “Reality is interdisciplinary,” adds Oliveira. “We created separate disciplines to facilitate research, but they do not reflect the real world.” The researcher from UFABC, a university that was founded as an interdisciplinary institution, has her own experiences in this regard. “I have published an article on public policy with colleagues from geology.”

Joining forces is necessary for such an ambitious goal. “It is possible, here and now and with existing public resources, to implement public policies that ensure safety and good living and working conditions for Brazilian women,” says the network’s manifesto. According to Oliveira, some politicians have already realized the potential of this scientific knowledge to public policymaking and have contacted the group. The São Paulo state government’s website also announced the formation of the network. Nothing concrete has yet occurred, but the early signs are promising.

As the initiative grows and becomes more organized, Oliveira hopes that even more female scientists will recognize the problems faced by women and include the perspective of gender in their research, generating greater dialogue. They are also looking for ways to inspire young women in science to engage with these issues.

Female representation in academia is still unsatisfactory in most fields: some are dominated by men, and in most, women are rarely seen in the most senior career stages. There is also a consensus that female scientists are suffering more than their male counterparts during the pandemic, with a significant drop in productivity due to childcare, caring for elderly parents, and housework, all of which are not shared equally in many households. According to Frateschi, some fields are seen as more suitable for women. “At UNICAMP, areas related to numbers, calculations, and strategy are dominated by men.” Women, on the other hand, are the majority in disciplines such as nursing and education, which are associated with care. “It is crucial to show society that women are capable of producing quality science in all fields, that knowledge has no gender: the Brazilian Network of Women Scientists has the potential to do that,” says the philosopher.

Frateschi also emphasizes the importance of gender equality to the evolution of the fields themselves. “When women are involved in science, they look at women.” One good example, says the philosopher, is how it took the formation of a significant body of historians for “the hidden issue that women are historical subjects,” to come to light. She has dedicated her studies to identifying female philosophers who despite having produced important philosophical ideas throughout history, have not entered the canon (the authors renowned as classics, primarily responsible for producing the field’s body of knowledge). “The canon remains almost exclusively male, until women decide to rewrite it,” she says. In her opinion, female protagonism in science is especially important at this time, when both women and science itself are in a vulnerable situation due to the dismantling of a series of public policies, as well as a wave of denialism and misogyny. “Female scientists are saying: we were here and we are not going anywhere.”

“It is possible to create a transversal organization, which becomes more creative as it grows,” says Tatagiba. One of their concerns is that the group should be representative in terms of ethnicity, socioeconomic status, sexuality, and geographic diversity—there are already members from all 26 Brazilian states and the Federal District. More than being simply symbolic, the idea is to confront the historical domination of university courses in the South and Southeast of Brazil, and to stimulate the production and contribution of other regions.

It is not clear whether there is a uniquely female way of approaching science, but this collaborative model could help us to find out. “Our academic history follows a productivist method, we don’t even know how to do things differently,” ponders Tatagiba. The members of the network also take steps to be mindful of others during their work. “We try to respect downtime and not schedule meetings late at night, and we avoid working on the weekend—although this often does end up happening,” says Oliveira (the interview for this article took place on May 1st, a Saturday and a public holiday). “These are steps that should be taken to make academia a kinder and more cooperative environment.”