The museum compound at Quinta da Boa Vista: money to start renovation work was to be available after the elections

On the afternoon of Friday, August 31, around 30 members of the National Museum Congregation, including researchers and representatives of staff and students, met in a room adjoining the former bedchamber of Dom Pedro II, on the 3rd floor of the São Cristóvão Palace, at Quinta da Boa Vista, Rio de Janeiro. The Congregation—the institution’s highest governance body—discussed matters ranging from the postelection disbursement of R$21.7 million in funding from the Brazilian Development Bank (BNDES) for the renovation and revitalization of the palace building, to an invitation that had been received for the museum to showcase items from its collection at other institutions. “These meetings are held monthly and can often get quite tense, but that meeting in particular was a pleasant one as there were many exciting developments on the horizon and the year had been particularly memorable, with the museum celebrating its 200th anniversary and even being featured in a samba school parade,” says one of the meeting participants, botanist Vera Lúcia Huszar, recalling the theme selected by samba school Imperatriz Leopoldinense for its Carnival parade this year in Rio de Janeiro.

The fire two days later destroyed a significant part of the institution’s collection and reduced the nineteenth-century building that had once served as the official residence of the royal family in Brazil—including the room where the Congregation had met—to ruins. “In a matter of hours, the year of the museum’s bicentennial became the year of its destruction. Our task now is to maintain our education and research programs and make 2019 the year of reconstruction,” says Huszar, who joined the institution as a researcher in 1979 and serves as chairwoman of the Association of Friends of the National Museum.

The museum, run by the Federal University of Rio de Janeiro (UFRJ), had been in dire financial straits for several decades. But matters became still worse when the UFRJ’s budget fell from R$450 million in 2016 to R$388 million this year, according to museum officials. Ten of its 30 halls were closed to visitors. Last year, one of the halls, containing a dinosaur exhibit, was closed due to termite damage. A crowdfunding campaign raised R$50,000 to repair the damage, and the hall was reopened in July.

Museologist Wagner William Martins, deputy director of administration at the museum, says the maintenance budget allotted by UFRJ for expenses on consumables—from lamps to toilet paper—and small repairs amounted to little more than R$520,000 in the last three years. “These funds, paid out of the university budget, were disbursed in three installments throughout the year. But in the last two years the Federal Government implemented budget cuts and only the first two installments were paid, coming to just over R$300,000.” Museum officials tried to channel the little money they had to the most pressing, priority expenses. “Two months before the fire, we were able to do routine maintenance work on the substation at the palace, which UFRJ had neglected for lack of funds,” says Martins. But lack of money was not the only challenge. “We only did minor repairs because we lacked the autonomy to conclude contracts creating new expenses. We would not, for example, have been able to hire a fire team because this was not an expense included in the budget. But we had, with the support of the Civil Defense Department, been able to provide fire training to five groups—a total of 94 staff—and we were planning to train two other groups.” Money from the maintenance budget had also been used to recharge the fire extinguishers, says Martins.

Exhibitions and educational programs were funded from a different source: about R$400,000 came from admission fees. These were collected by Fundação José Bonifácio, a foundation linked to UFRJ, and funneled directly to the museum without the budget rules imposed on federal universities, which require all collected revenues to be placed in a single account that is subject to budget restrictions even if earmarked for a specific purpose. The museum’s admission fee was R$8. Slightly over a third of the 192,000 visitors in 2017 were given free admission, including students from public schools. Admission was also free for people arriving one hour before closing time—the museum was open 7 days a week and closed for the day at 5:00 p.m.—and for visitors on the second Sunday of the month. The museum, Martins explains, would ideally need R$8 million a year to comfortably cover all its maintenance costs and function properly. “But even at a stretch we never came close to R$1 million,” he says.

Museum managers, however, believe the growing budget woes were not alone to blame for the tragedy. “The palace was built to be a residence and not to house a natural history museum,” says paleontologist Alexander Kellner, who became director of the institution six months before the fire, after receiving 63.7% of votes in a consultation with professors, staff, and students in September 2017—he won the election on a platform led by geologist Marcelo de Araújo Carvalho and, as is the tradition at UFRJ, his appointment was endorsed by Dean Roberto Leher. 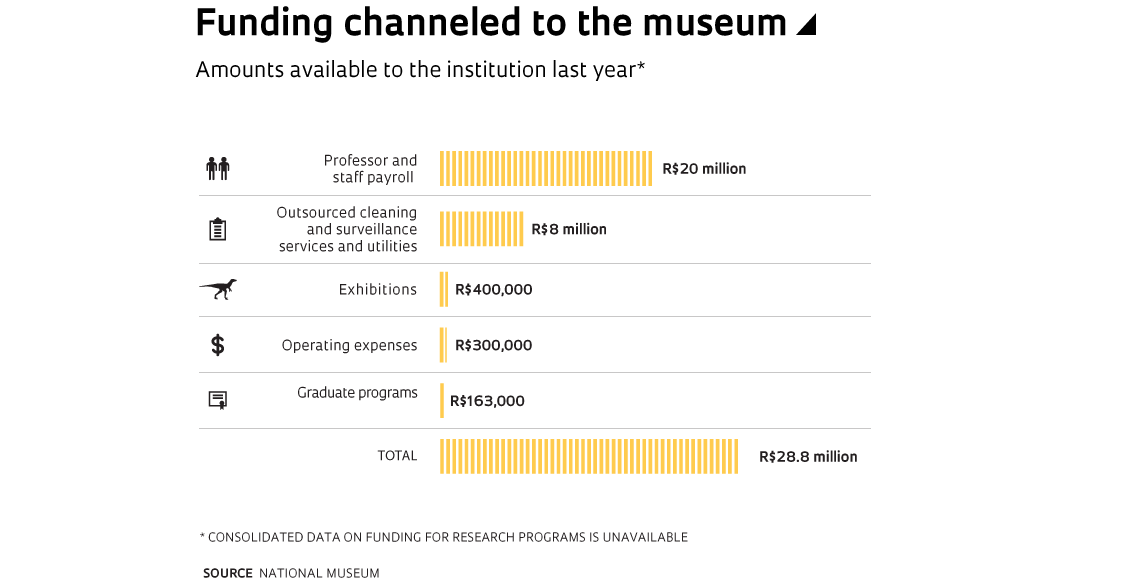 The risk of a fire occurring was always there, Kellner says. “We had just created a safety engineering department and were training employees on mitigating risks and using fire extinguishers.” Kellner was pursuing an ambitious program to invest R$300 million over the next 10 years under a Master Plan that included renovating the building, implementing a modern safety and fire protection system, and transferring the collection to a newly built building, leaving the São Cristóvão Palace for exhibitions only. “What is most painful is that we came very, very close to starting the program,” he says, referring to the funding agreement concluded with BNDES on June 5 for a program that included a fire protection project and the creation of an endowment fund as a source of perpetual funding for the museum.

He bemoans the difficulty he encountered in sensitizing authorities in Brasília and Rio de Janeiro to the needs of the museum. In 2013, the institution was benefited by a parliamentary order allocating R$20 million. “That money never made it to the museum because there were budget restrictions imposed by the government at the time.”

After the fire, part of the educational collection was opened to the public at Quinta da Boa VistaTânia Rêgo/Agência Brasil

The Federal Government played a vital role in defraying the National Museum’s operating expenses. The total cost of running the institution—estimated at almost R$30 million per year—was well beyond what the UFRJ upkeep budget and admission revenues alone could cover. The Federal Government, through UFRJ, funded the payroll of the museum’s 89 professors and researchers and 215 staff, some R$20 million per year. Similarly, outsourced surveillance and cleaning services and utilities were paid under contracts in common with UFRJ—the portion attributable to the National Museum under these contracts was estimated to be R$8 million per year.

Graduate programs
Around 500 master’s and doctoral students receive training at the museum, with the Brazilian Federal Agency for Support and Evaluation of Graduate Education (CAPES) and the Brazilian National Council for Scientific and Technological Development (CNPq) providing funding for six graduate programs in social anthropology, archaeology, botany, linguistics, Quaternary geology, and zoology. In 2017, the funding from these development agencies was a total of R$163,000 and was used for grants and operating expenses. “These funds had been substantially more abundant up until 2015, when they were slashed by more than 50%,” says Administrative Director Wagner Martins. Consolidated data on the amount of funding allocated by development agencies for professor-led research programs is unavailable.

A Master Plan was developed for a renovation of the palace building, a modern safety system, and a new building to house the collection

Being part of a federal university placed constraints on the museum’s ability to discretionally raise and use private funds. These difficulties were circumvented through the Association of Friends of the National Museum, a private nonprofit association created 80 years ago. “Our mission is to support the museum’s programs and initiatives,” explains Vera Huszar. The R$21.7 million BNDES loan signed in June to renovate the museum would have been managed by the association. Bank officials have already indicated that the loan can now be used to rebuild the palace.

The association also managed projects linked to the National Program of Support to Culture (PRONAC), as well as funding from crowdsourcing and parliamentary orders. Shortly before the fire, the association had received R$1 million from Vale under the Rouanet Act for a large mineralogy exhibition. Another project managed by the association is Coral Vivo, a Petrobras-sponsored coral reef research and conservation effort run by researchers from the National Museum in Arraial d’Ajuda, Bahia, since 2003. Botanist Vera Huszar paraded with the samba school Imperatriz Leopoldinense wearing a coral costume in tribute to the project. The costume she wore was on display at the museum and was consumed by the fire.