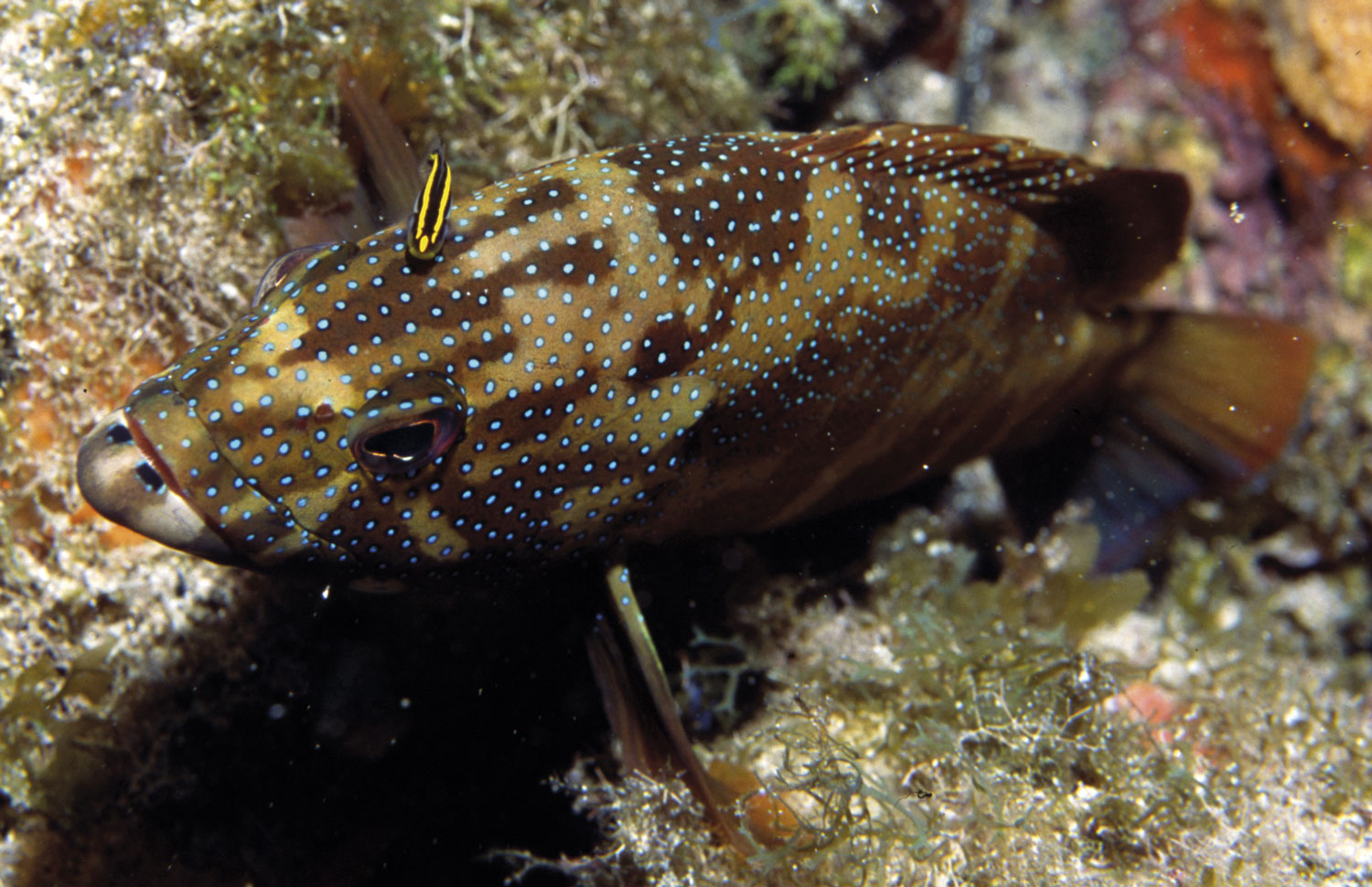 The waters of the Rocas Atoll, 267 km from Natal, Rio Grande do Norte State in Brazil, are home to one of the most striking phenomena seen in coral reefs: when predatory fish give themselves moments of respite and receive cleaning services from other fish and shrimp. In one of the most extensive surveys ever performed on the atoll, biologists from the Federal University of Santa Catarina (UFSC) identified eight cleaners—six fish and two species of shrimp—within the biological conservation area. The region is closed to the public and covers an area of 5.5 square kilometers (km2).

Cleaner fish specialize in eating parasites, diseased tissues, or mucus from larger fish and turtles, species that experts refer to as the clients of cleaner fish. “As a result of these interactions, clients maintain their health and the cleaner gets food, but both sides have had to evolve to recognize each other and to not attack each other during the cleaning process,” summarizes Colombian biologist Juan Pablo Quimbayo Agreda, a researcher from UFSC. He is part of the Brazilian Marine Biodiversity Research Network (SISBIOTA-MAR), which has brought together 30 researchers from nine institutions in order to study the biodiversity of Brazil’s four oceanic islands: the Rocas Atoll, the Fernando de Noronha Archipelago, the São Pedro and São Paulo Archipelago, and the Trindade and Martim Vaz Archipelago.

“Cleaner fish evolved from other fish that ate small crustaceans and other invertebrates,” says biologist Carlos Ferreira, a professor at Fluminense Federal University (UFF) and one of the coordinators of SISBIOTA-MAR. He explains that by specializing in eating parasites, a relatively scarce food source, fish that spend most of their lives in reefs “avoid competition for other foods.”

In the atoll, the wrasse prefers herbivorous clients and avoids predators, who may eat it if its cleaning services are not well rendered

In May 2016, under the guidance of Ferreira and biologists Sérgio Floeter of UFSC and Ivan Sazima of the University of Campinas (UNICAMP), Quimbayo and biologists Lucas Nunes and Renan Ozekoski, also from SISBIOTA-MAR, observed 318 interactions between fish at depths ranging from 1 meter (m) to 5 m for 44 hours over 22 days.

Two species endemic to the region were the most active: the Noronha wrasse (Thalassoma noronhanum), which reaches 12 cm in adulthood, and the Noronha cleaner goby (Elacatinus phthirophagus), which can reach up to 4 cm. The wrasse participated in 75% of the cleanings and served the largest variety of client species: 18 of the 22 total fish species and one turtle species that sought the cleaners’ services. In an article published this July in the journal Environmental Biology of Fishes, the biologists attribute the high number of cleaning sessions to the fact that most of the clients (82%) are herbivores; it is important to note that the wrasse was also found to be the most abundant species in the area.

The three biologists observed peculiar behaviors among the cleaner fish in the atoll. Around Fernando de Noronha, only juvenile wrasses feed on the parasites of other fish, but in the atoll, this habit is also maintained by adults. In the atoll, the wrasses avoid getting too close to species that could eat them. “We assume that this species can somehow identify which species are dangerous—probably through an evolutionary process that eliminated more reckless individuals,” says Quimbayo.

The goby was found to have a flexible diet, abandoning the herbivorous habits it maintains in other places; in the atoll, it feeds on worms, even risking its life by approaching carnivorous clients such as nurse sharks (Ginglymostoma cirratum), which can grow to as much as 4 m in length and 100 kg in weight. In a study from August 2010 to April 2015 around Malpelo Island, located 400 km west of the Colombian coast, Quimbayo identified five species of fish acting as cleaners, none of which specialized in this activity as much as those in the atoll. In just over half (56%) of the 120 interactions, the clients were predatory species such as groupers, stingrays, and sharks.

Cleaning Services
More clients frequent cleaners early and late in the day; the cleanings can last from a few seconds to several minutes. Cleaning sessions usually take place in specific spaces, known as “cleaning stations,” which are located near rocks or coral, and the fish follow their own rituals (see Pesquisa FAPESP, issue No. 79). Clients enter the cleaning stations and exhibit more vivid colors or swim face down to indicate that they will allow for a cleaning and will not attack. “They are in a buffer zone; nobody is going to eat anybody,” reports Quimbayo. Through his observations, he has determined that cleaner fish should be careful so as not to risk being eaten during the cleaning service. “If the cleaner fish chews off a piece of skin or mucus, the client may not like it and may react with a sharp bite.”

There are 208 cleaner fish species circulating in and around the bays and islands of the world. They make up approximately 3% of the 6,500 species of reef fish and less than 1% of the world’s 30,000 fish species, according to a survey organized by David Brendan Vaughan of James Cook University in Australia, published in 2016 in the journal Fish and Fisheries. Cleaner shrimp are even less common. Of the 51 known species, two live in the atoll: Lysmata grabhami, with white antennae up to 6 cm in length, and Stenopus hispidus, with a red-and-white-striped body and white antennae that grows up to 10 cm in length. They accounted for only 3.7% and 2.7% of all recorded cleaning episodes, respectively, and offered services mainly when cleaner fish were not around. These observations were similar to Quimbayo’s previous findings in a 2012 study on the islands of Cape Verde and São Tomé and Príncipe off the coast of Africa.

Islands at Risk
The SISBIOTA-MAR surveys indicate that the Rocas Atoll is the most well preserved of the four Brazilian oceanic islands since it is a biological reserve with access granted only to researchers. “Even in Fernando de Noronha, which has the status of a national park, the protected area sustains a growing human population, and there is an area outside the park where activities such as fishing are allowed,” Ferreira notes. He also explains that the fish in the protected area can swim to the unprotected area where they are caught.

Ferreira notes that in the São Pedro and São Paulo Archipelago, located 1,000 km from Natal, there are no longer any sharks, and schools of tuna have been greatly reduced due to overfishing. In recent years, the island of Trindade, located 1,200 km east of Vitória, Espírito Santo State, has suffered from underwater fishing “because it has no protection status,” he explains. In August of this year, on the fifth expedition for the project, the SISBIOTA-MAR team intends to return to Trindade for their annual monitoring of marine organism communities.