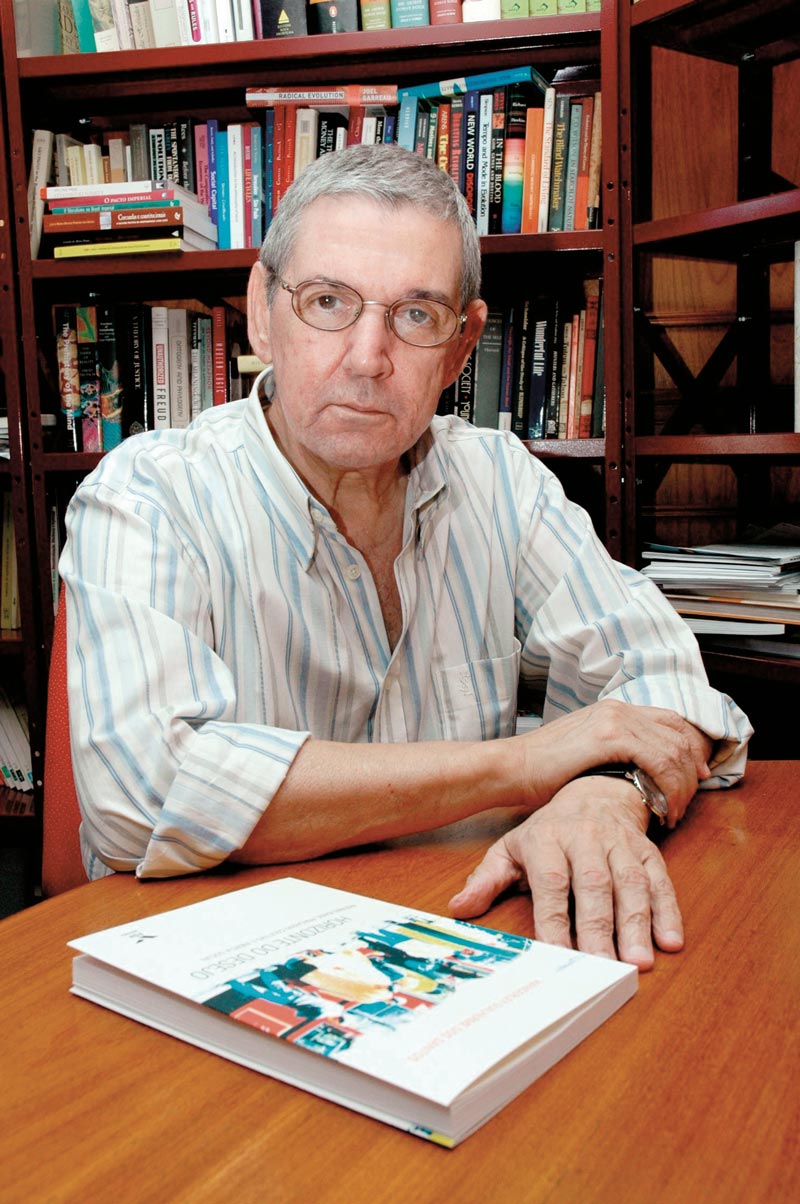 Wanderley Guilherme dos Santos in Rio de Janeiro during the launch of his book, Horizonte do desejo, in 2006Alexandre Durão / Folhapress

Wanderley Guilherme dos Santos, one of the pioneers of political science as an academic discipline in Brazil, died on October 26 at age 84. A retired professor at the Federal University of Rio de Janeiro (UFRJ), he held a position as an associate researcher at the Institute of Social and Political Studies of the State University of Rio de Janeiro (IESP/UERJ), where he continued to lecture until his death.

Wanderley, as he was affectionately called, dedicated his career to exploring diverse lines of inquiry within political science—from electoral studies to philosophy—as noted by IESP/UERJ Director João Feres Júnior. Democracy was a core thread in dos Santos’s work, Feres Júnior recalls. “One of his concerns was the challenge of establishing a stable and inclusive democracy in countries like Brazil, where antidemocratic factors are abundant,” says Feres Júnior.

His former colleague at IESP, sociologist Adalberto Moreira Cardoso, also recalls Wanderley’s efforts to understand and explain Brazil’s democratic system. “He used to say that democracy is a work in progress, a continuous struggle against authoritarianism and barbarism,” Cardoso recounts. “Despite his despondency later in life, he continued to undertake studies that helped to tackle the country’s problems, and especially its many forms of inequality, in the face of contradictions and difficulties.”

Examples of these efforts include his research in the 1970s and early 1980s on the reconstruction of democracy following the end of the military dictatorship (1964–1985). “He was one of the first to realize that Brazil’s societal transformation during the dictatorship—the expansion of its working class and the mass movement of people to cities—had unleashed forces that the dictatorship, as history would show, would be unable to contain. Wanderley correctly predicted that democracy would be reinstated one way or the other,” says Cardoso.

Born in Rio de Janeiro, Wanderley first gained public notice in Brazil when in 1962, at age 27, he published Quem dará o golpe no Brasil? (Who will stage the coup in Brazil?), a book in a series titled Cadernos do Povo Brasileiro, published by Editora Civilização Brasileira. “In his book, he effectively foretold the coup of 1964, predicting that the impasse that Brazil’s democratic system had reached would ultimately lead to a rupture,” says Cardoso. “He described the forces acting in the unstable balance of power at the time—political parties, the middle class, the working class and, most importantly, the military—and showed that the political system had become incapable of managing and restraining these conflicts.” Of the more than 30 books he wrote, Cardoso highlights Crise e castigo: Partidos e generais na política brasileira (Crisis and punishment: Parties and generals in Brazilian politics; Vértice/IUPERJ, 1987) and Horizonte do desejo: Instabilidade, fracasso coletivo e inércia social (Horizon of desire: Instability, collective failure and social inertia; FGV Editora, 2006) as the most influential. “He developed a political science framework that was multifaceted and connected to global trends in political thought,” says Cardoso. Wanderley graduated in philosophy from UFRJ in 1958, and in 1979 defended his doctoral thesis, titled “The calculus of conflict: impasse in Brazilian politics and the crisis of 1964,” at Stanford University, USA.

A public intellectual
Alongside sociologist and political scientist Bolívar Lamounier and jurist César Augusto Coelho Guimarães, in 1969 Wanderley founded the University Research Institute of Rio de Janeiro (IUPERJ), one of the first institutions to offer a graduate program in political science in Brazil. “Breaking away from the essayist tradition that was then prevalent in the social sciences in Brazil, IUPERJ researchers instead engaged in research based on empirical data, albeit without neglecting theory,” says Feres Júnior, noting that Wanderley was the very epitome of this new intellectual mindset. In 2010, the institute migrated to UERJ, and was renamed IESP.

One of the first doctoral students to be supervised by Wanderley, historian Angela de Castro Gomes, now a visiting professor at the Federal University of the State of Rio de Janeiro (UNIRIO), recalls how Wanderley endeavored to give his students well-rounded textbook assignments, and to encourage intellectual independence. Gomes says she benefited, in writing her thesis, from their mutual interest in developing a concept of citizenship revolving around social rights, rather than political rights. “He didn’t want his students to be “yes-women” or “yes-men,” but instead encouraged us to defend our own ideas,” she recalls. Gomes says she now looks to Wanderley as a role model in her own supervision of theses and dissertations. “In addition to his exemplary career, I would highlight the humane aspect of our relationship. I had my two daughters during my doctoral studies and Wanderley was very generous on both occasions,” she recounts.

Besides Gomes’s doctoral thesis (1987), dos Santos also supervised, among others, the theses of anthropologist and political scientist Luiz Eduardo Soares (1991) and sociologists Renato Lessa (1992) and Luis Carlos Fridman (1997). “None of the students he supervised were uninfluenced by his intellectual rigor,” says Cardoso of IESP.

Sociologist Luiz Augusto Campos, also of IESP, recalls how in a lecture in celebration of the institution’s 50th anniversary, in late September, rather than dwelling on the institution’s past, Wanderley instead spoke about the future of graduate education. He also recalls how Wanderley lectured in a course titled “Introduction to the 21st century” until just a few days before his death, from pneumonia. “In the course, he used current textbooks dealing with contemporary issues, such as the relationship between algorithms and democratic crises. The oldest textbook was from 2007.”

IESP Director Feres Júnior says Wanderley left two books unpublished: one, which should be published shortly, analyzes the results of the 2018 presidential elections; the other, which he left unfinished, deals with the Brazilian electoral system. “Democracy was not only an object of study for him; it was integral to the way he related with others. Students and peers alike were engaged by his questioning mind, in good Socratic fashion,” says Feres Júnior.