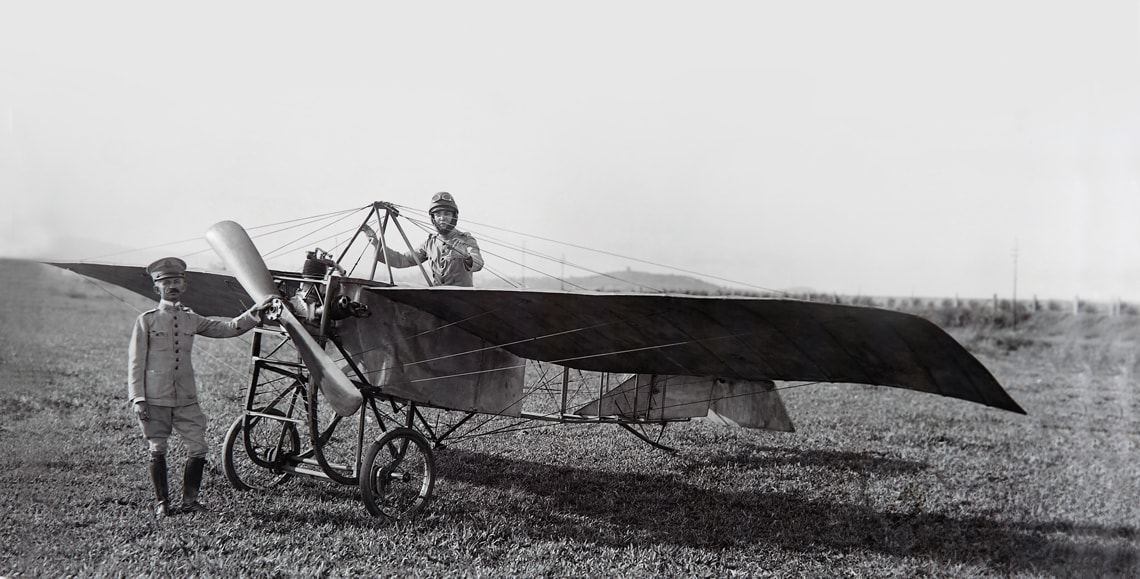 The Aribu before take-off. On the left, Marcos Villela Júnior; seated in the plane, Raul Vieira de Mello

Physicist Thyrso Villela Neto, a researcher at the Brazilian National Institute for Space Research (INPE), was presented last July 19 with a Santos-Dumont Medal of Merit for outstanding services to the Brazilian Air Force, in a ceremony at the Department of Aerospace Science and Technology (DCTA), in São José dos Campos, southeastern Brazil. The medal was a posthumous tribute to his great-grandfather, Marcos Evangelista da Costa Villela Júnior (1875–1965), the first senior aviator in the Brazilian Army and the first military officer to rise to the rank of brigadier general in the Air Force. Villela Júnior built two airplanes—the Aribu, which flew in 1917, and the Alagoas, in 1918—initially with money out of his own pocket and later with support from the Army.

“They were the first military aircraft ever built in Brazil,” says reserve lieutenant Mauro Vicente Sales, who is also a historian and works as a public-school teacher in Rio de Janeiro. The two aircraft demonstrated the feasibility of developing and building aircraft locally in Brazil, and gave momentum to the idea of creating an Air Force, which would be formally established in 1941.

Born on a quiet street in the municipality of Pão de Açucar, northeastern Brazil, with a present-day population of around 25,000 people, then lieutenant Villela enjoyed assembling French airplanes at the Army’s cartridge and war materials manufacturing facility in the district of Realengo, Rio de Janeiro. He was not alone in his enthusiasm over the recent feats of Brazilian aviation pioneer Alberto Santos-Dumont (1873–1932), who had built his own planes in Paris.

In Osasco, then a district of São Paulo, an airplane named after the city, designed and built by the Spanish-born Brazilian industrialist Dimitri Sensaud de Lavaud (1882–1947) and Italian mechanic Lourenço de Pellegatti (1891–1976), similar in design to the French Blériot monoplane, and fitted with a French engine, had successfully taken flight in 1910. 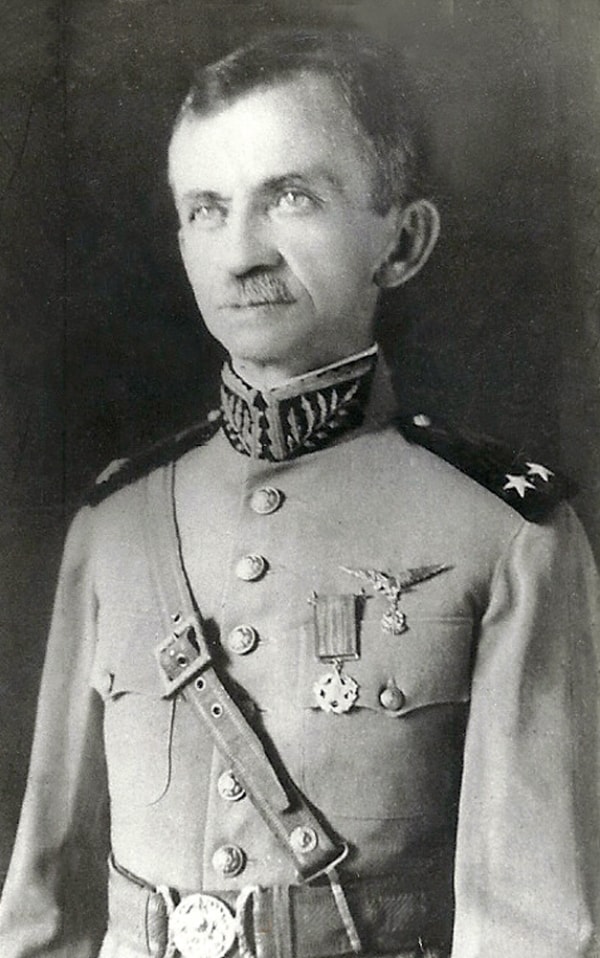 In 1914, Brazilian Eduardo Pacheco Chaves (1887–1975) completed the first nonstop flight between São Paulo and Rio in six and a half hours, aboard a Blériot. But these, unlike Villela Júnior’s project, were isolated and independent initiatives.

In 1912, he presented his design to the war minister, Vespasiano Gonçalves de Albuquerque e Silva (1852–1924), hoping to secure funding. He was unsuccessful, but not defeated. He mortgaged his house and began testing locally available timber to make propellers, on a property in Realengo. At a factory in Sapopemba, the present-day district of Deodoro, he developed a high-strength cotton fabric to cover the fuselage; he also formulated the varnish used to coat the plane. “He made everything himself,” says his great-grandson, Villela Neto. In his earlier work in aviation, he rebuilt a Blériot and installed a propeller that he had made on a navy airplane used for aerial recognizance.

An article published in the newspaper A Noite on July 24, 1914, under the headline “Brazilian officer introduces extensive aircraft modifications, creates entirely new aircraft,” described a number of his innovations, which included shortening and vertically enlarging the fuselage—the airplane’s body—to reduce roll and improve stability, and positioning the pilot seat below the wings for increased visibility. The wing spar was curved and a third of the wing was flapped to facilitate maneuvering and prevent skidding. His design seated three crew members (the pilot, an observer, and a mechanic or gunner) and featured side pockets for ammunitions.

The first prototype, made of Ingarana wood (Abarema jupunba), was christened Aribu, a name resembling the Portuguese word for buzzard (urubu)—the aircraft’s builder said he enjoyed watching buzzards fly as a child. Measuring 4.8 meters (m) in length, 8.4 m in wingspan, and 2.4 m in height, the Aribu was powered by a French 5-cylinder, 50-horsepower rotary engine. It made its maiden flight on April 16, 1917 in a field in Santa Cruz, flown by Lieutenant Raul Vieira de Mello (1884–1936), who also drafted the plans for the plane. The successful flight won Villela Júnior support from the new war minister, General José Caetano de Faria (1855–1936). He was given access to Army facilities and equipment, and soon built the Alagoas, which Villela Neto estimates was larger than the Aribu.

On the morning of November 11, 1918, as Europe was celebrating the end of World War I, the Alagoas completed three trouble-free flights—two with Mello and one with Villela Júnior himself as pilot—reaching a height of 800 m over Campo dos Afonsos. After the first flight, the war minister hugged Mello enthusiastically and congratulated Villela, saying he was “glad to have found the solution to the aviation problem among our own,” as reported by the daily Correio da Manhã the following day. In an internal memorandum, the minister celebrated “the thorough success” of the plane, “the development of which was accomplished with national capabilities, with the exception only of the engine.” But even today, major aircraft manufacturers such as Boeing, Airbus, and Embraer prefer to source their engines from suppliers such as GE Aviation, an operating unit of General Electric, and Pratt & Whitney.

Villela Júnior (left, in uniform) with his back to a Blériot, and opposite him the Aribu (right), just before takeoffGerson Pinto da Silva Souto. Personal archive of Denizar Villela /Thyrso Villela Neto

“The Alagoas was the first biplane [with two wings stacked one above the other] built in Brazil,” Villela Neto wrote in an article in the July–December 2017 issue of the magazine Parcerias Estratégicas. The flight of the Alagoas lent credibility to ambitions to build aircraft locally in Brazil and create an independent military branch for aerial warfare, which would later become the Air Force, as Villela Júnior had advocated since 1916 in articles published in the magazine A Defesa Nacional.

“The Army deployed the two planes as trainers at the Military Aviation School, which was founded in 1919,” says Sales, who explored Villela Júnior’s work in a 2011 article in the magazine Revista UNIFA, of the University of the Air Force. “But despite the Army’s support, the project was ultimately abandoned. Brazil missed a golden opportunity to develop a thriving aerospace industry in those early years, with Brigadier Villela at the helm.” The government chose instead to buy French and English aircraft used in World War I, rather than investing in a home-grown program.

Based on historical documents and research, Sales discovered that the Aribu was lost to an accidental fire. In 1921, Villela Júnior had just received praise from the officials of a French mission that was assisting the Brazilian Army, when the next morning the Alagoas was found burned to a hulk in a closed hangar where it had been left overnight, without fuel. Around that time, according to his biography in the book Canudos, memórias de um combatente (Canudos, memoirs of a soldier), he built a scale model airplane for take-off and landing only, with a small engine, flexible wings, and a prototype spiral propeller.

Villela Júnior was later transferred to the Reserve as a general. Following his advocacy for the incorporation of aviation by the Brazilian Army, in 1927 aviation was recognized as a fifth combat arm alongside infantry, artillery, engineering, and cavalry. In 1941, with the creation of the Air Force, he was promoted to brigadier general, though still remaining in the Reserve.

Drawings of the Alagoas, a biplane that flew successfully in 1918Marcos Villela Júnior

Mass production
In 1951, at age 76, Villela Júnior wrote Canudos, memórias de um combatente, describing his participation in the War of Canudos in Bahia (1896–1897). Then a sergeant, he took part in two expeditions to the community of Canudos, which had revolted under the leadership of the religious zealot Antônio Conselheiro (1830–1897). He was one of the operators of the matadeira (“The Killer”), a cannon that was used to bombard the village, and was seriously wounded during one of the expeditions. In 1951, he received a medal for bravery in Canudos and, in 1958, was awarded the Order of Aeronautical Merit, as Grand Officer.

After other isolated initiatives, serial aircraft production would only be established in Brazil in 1934, enabled by support from the Getúlio Vargas administration (1882–1954) and the efforts of Army Lieutenant Colonel Antônio Guedes Muniz (1900–1985) and industrialist Henrique Lage (1881–1941). One year later, the first mass-produced model, the M7, made its maiden flight at Campo dos Afonsos, in Rio. Lage’s Companhia Nacional de Navegação Aérea (CNNA) produced 26 units of the M7 and 40 of the M9, both designed and supervised by Guedes Muniz.

After World War II, imports of low-priced aircraft, this time from the US, again deferred development of Brazil’s aerospace industry. It was only with the creation of aircraft manufacturer Embraer in 1969, with a team of engineers trained at the Brazilian Air Force Institute of Technology (ITA), which had been founded in 1950 in São José dos Campos, that a domestic aircraft manufacturing industry finally began to take shape.