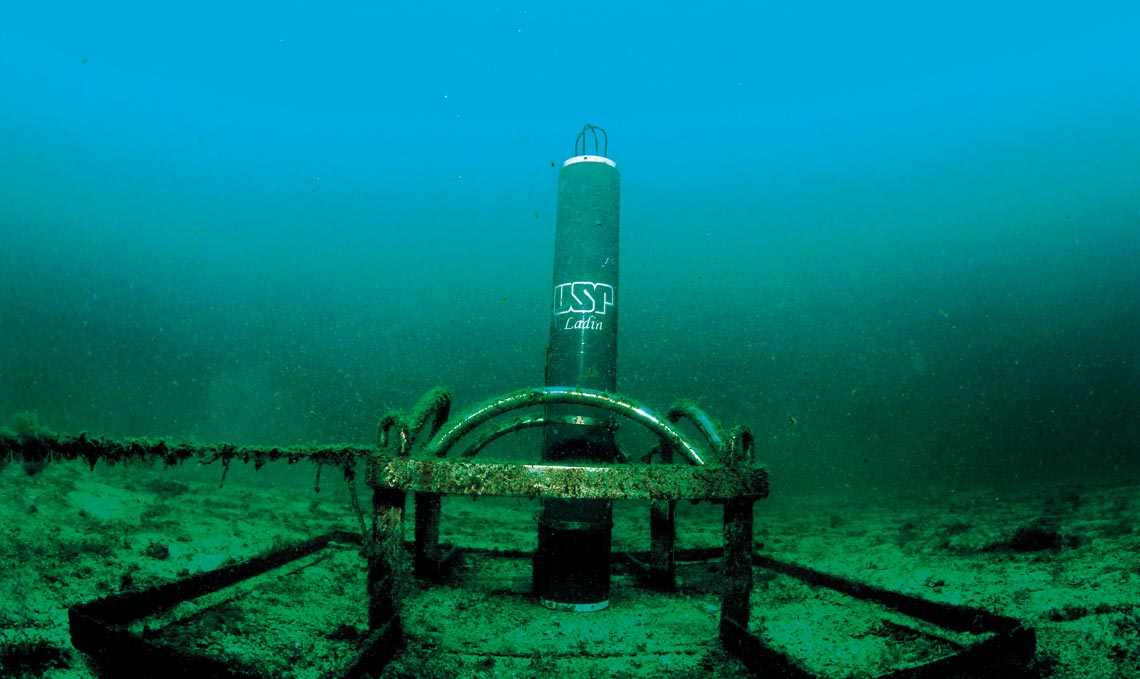 A hydrophone built at USP

Low, medium, or high in frequency, sounds generated by humans or by nature inundate the planet and can provide information on the health of ecosystems. The myriad crackles, hisses, chirps, roars, squeals, and crunching sounds produced by living beings broadens our knowledge of how different species interact with each other and the environment, as well as exposing the effects of human interference. In Brazil, research groups dedicated to studying the ecology of the sonic landscape, or soundscape, have begun to form. This new branch of ecology integrates concepts from physics, music, architecture, psychology, and of course, biology. It’s an alternative, complementary way of doing environmental research, which predominantly depends on visual observations or capturing specimens.

Researchers work on profiling the sound of marine and terrestrial environments, then analyze the utility of algorithms that attempt to synthesize the richness of the physical characteristics of sound into a single index, thus facilitating the analysis of huge quantities of data. They also develop computational strategies for identifying specific sound events. “In many cases, the sound recording of an environment makes it easier to identify the presence of an endangered species,” says engineer Linilson Padovese, who develops equipment for recording both underground and underwater at the Acoustics and Environment Laboratory (LACMAM) at the Polytechnic School of the University of São Paulo (Poli-USP).

At LACMAM, Padovese, engineer Elder Santos, his doctoral student, and statistician Paulo Hubert Junior, a postdoctoral fellow, created methodologies involving statistical and machine learning algorithms to characterize a landscape more completely. These include sounds made by animals and visual records of the growth of vegetation. They are testing this strategy using data collected from a stretch of Atlantic Forest that incorporates areas at different stages of recovery, in the municipalities of Itatiaia and Resende in Rio de Janeiro. 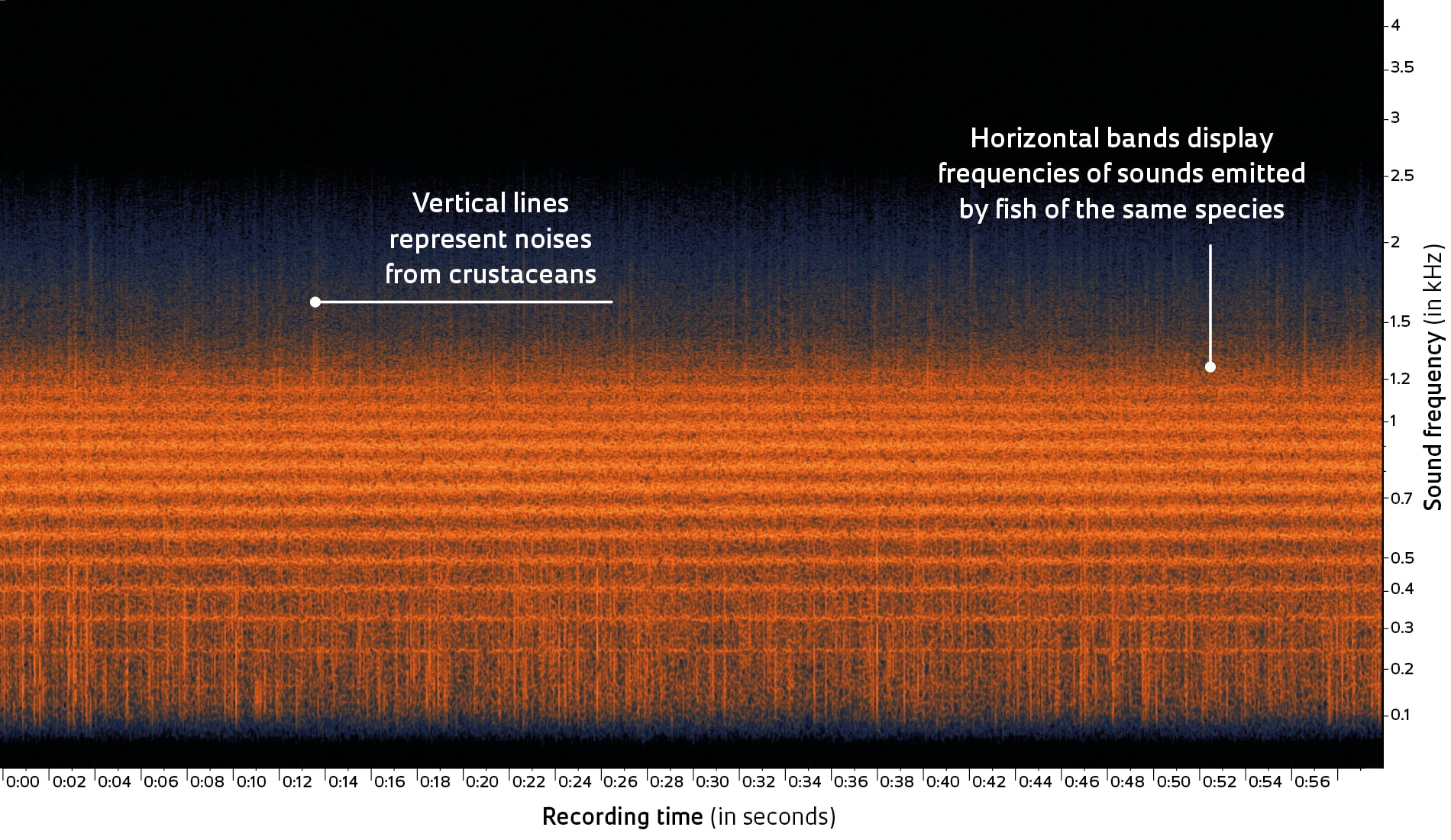 At the request of environmental conservation organizations, the group developed a computational strategy based on machine learning to automatically identify the singing of specific birds in recordings, such as the red-browed amazon (Amazona rhodocorytha), the vinaceous-breasted amazon (Amazona vinacea), and the red-tailed parrot (Amazona brasiliensis), all endangered. According to Padovese, analysis of the recordings from Itatiaia and Resende made it possible to distinguish at least two instances of vocalization of the red-browed amazon, which was believed to be extinct in the region.

Linilson Padovese began his work in soundscape ecology in the ocean. Using hydrophones and underwater recorders developed in the USP laboratory, he and Cuban computer engineer Ignácio Sánchez Gendriz, now a researcher at the Federal University of Rio Grande do Norte (UFRN), profiled the sound environment at Laje de Santos State Park and Xixová-Japuí State Park, both on the São Paulo coast. There they identified the presence of humpback whales and different types of fish choirs, which usually produce more intense sounds at sunrise and sunset. Late afternoon choirs almost always start around 6 p.m. and, in unison, progressively gain in intensity. “Some go on for hours and only subside in the middle of the night,” says Padovese, who also identified noises in the recordings produced by boats in locations where they are prohibited. 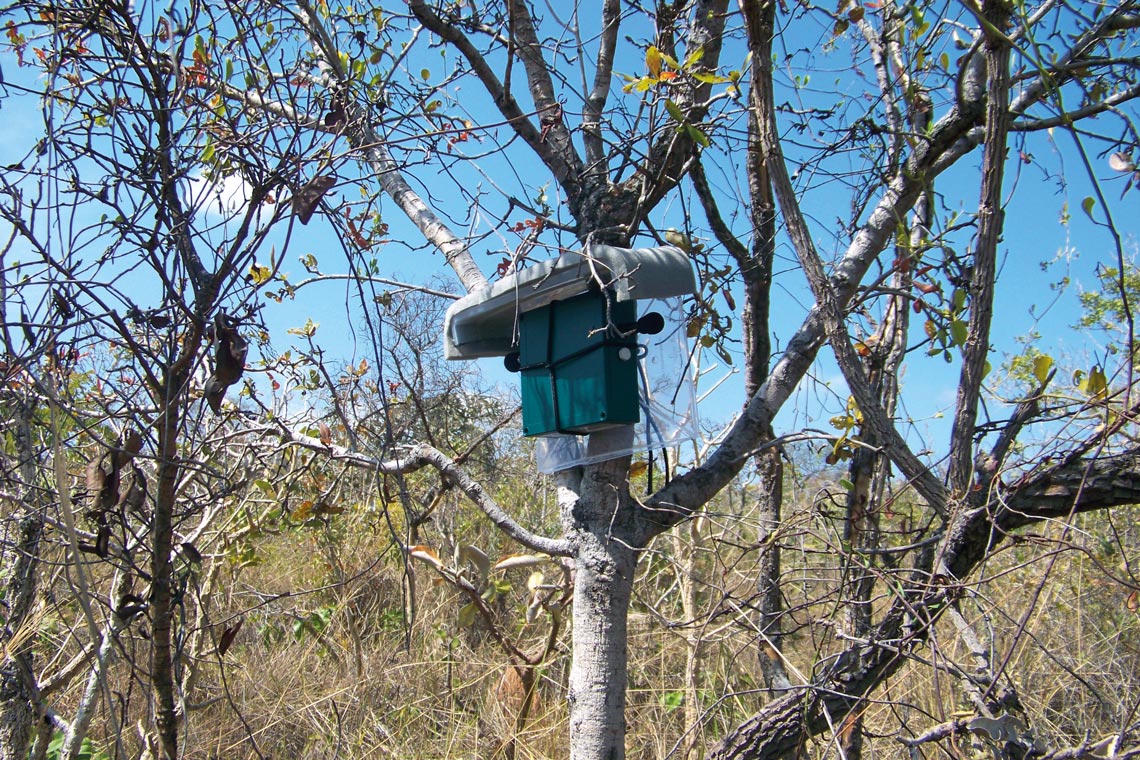 The work of biologists, engineers, and computer scientists studying Brazilian soundscapes goes beyond recording the diversity of nature’s sounds. They use this data to profile biomes and compare them during different times and conditions. In 2015, biologists Marina Duarte of the Pontifical Catholic University of Minas Gerais (PUC-Minas) and Renata Sousa-Lima of UFRN, together with Italian ecologists Nadia Pieretti and Almo Farina from the University of Urbino, began to establish guidelines for monitoring Brazilian ecosystems.

In 2012 and 2013, Duarte installed an audio recorder in an area of Cerrado (wooded savanna), another in the Atlantic Rainforest, and a third in rocky, highland meadows, all located in Minas Gerais State. She then recorded the sounds of each of these environments for six days during both dry and rainy seasons. “There was no internationally accepted standard for analyzing soundscape recordings, and the different groups decided subjectively how frequently and for how long to analyze the data,” says Duarte. “We decided to set a standard for certain Brazilian ecosystems.”

Almost 800 hours of recordings were done in each ecosystem, then the data were analyzed using samples taken at increasing intervals. Researchers began by examining one minute of sound for every five minutes of recording and increased the interval to one minute every hour, according to a 2015 article in Tropical Conservation Science. As expected, as the interval between samples increases, data is lost. In trying to establish the interval that would best balance collection feasibility and data quality, they noted that the frequency of analysis that provided the most data varies from one ecosystem to another. “In the Atlantic Forest, it’s possible to examine one minute out of every half hour,” explains Duarte. “In the Cerrado it’s necessary to analyze 1 minute of every 15 and in the highland meadows 1 out of 5.” 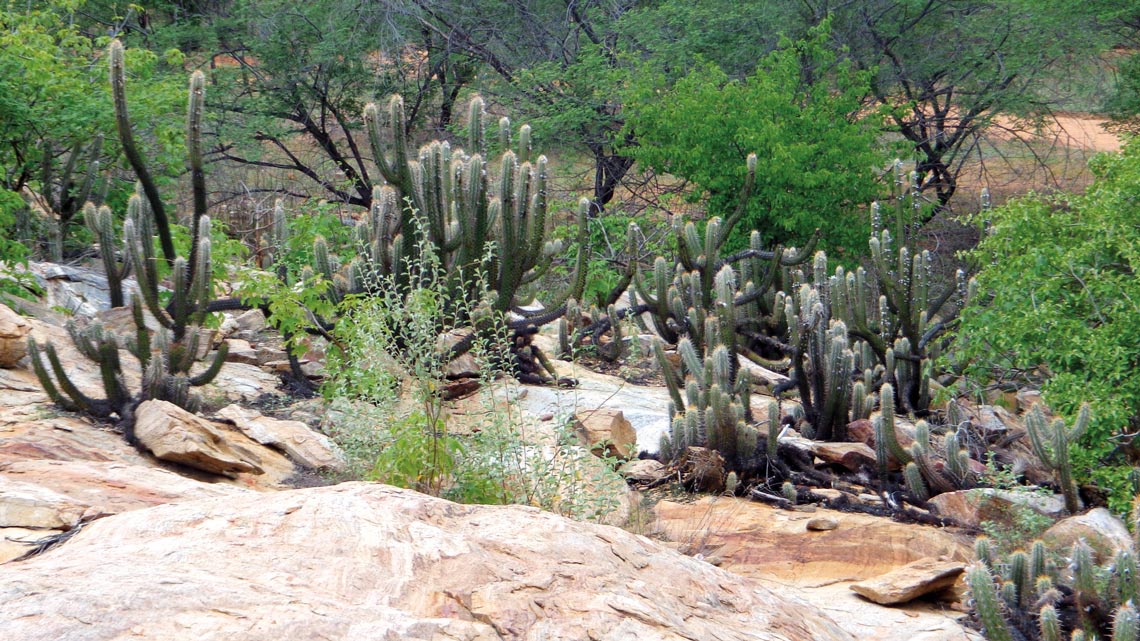 Marina Duarte became interested in soundscape ecology while pursuing her master’s degree and studying the behavior of black-tufted marmosets (Callithrix penicillata) in a park in Belo Horizonte, where she noted the impact of urban noise on the animal’s behavior. For her doctorate (supervised at the Federal University of Minas Gerais [UFMG] by Marcos Rodrigues and Robert Young, from PUC-Minas, both ethologists, and UFRN’s Sousa-Lima), Duarte investigated the effect of noise pollution from mining on a stretch of Atlantic Rainforest in the municipalities of São Gonçalo do Rio Baixo and Santa Bárbara, about 100 kilometers east of Belo Horizonte.

She installed microphones both inside a well-preserved section of forest and along its edge, 500 meters from the Brucutu mine, one of the largest iron ore extraction sites in the world. From October 2012 to August 2013, the sounds were recorded for seven-day stretches, with an interval of two months. Explosions, sirens, machine noises, and especially the traffic of heavy trucks, which can number 700 per day at certain times of the year, affected most of the study area.

The effects were most intense at the edge of the forest, 25 meters from the road the ore was transported on. There, the complexity of sounds was significantly lower than in the section’s interior, indicative of less species diversity. The sonic richness on the edge of the forest near the mine was also lower than in another much less noisy border area, near a dirt road used by cars. 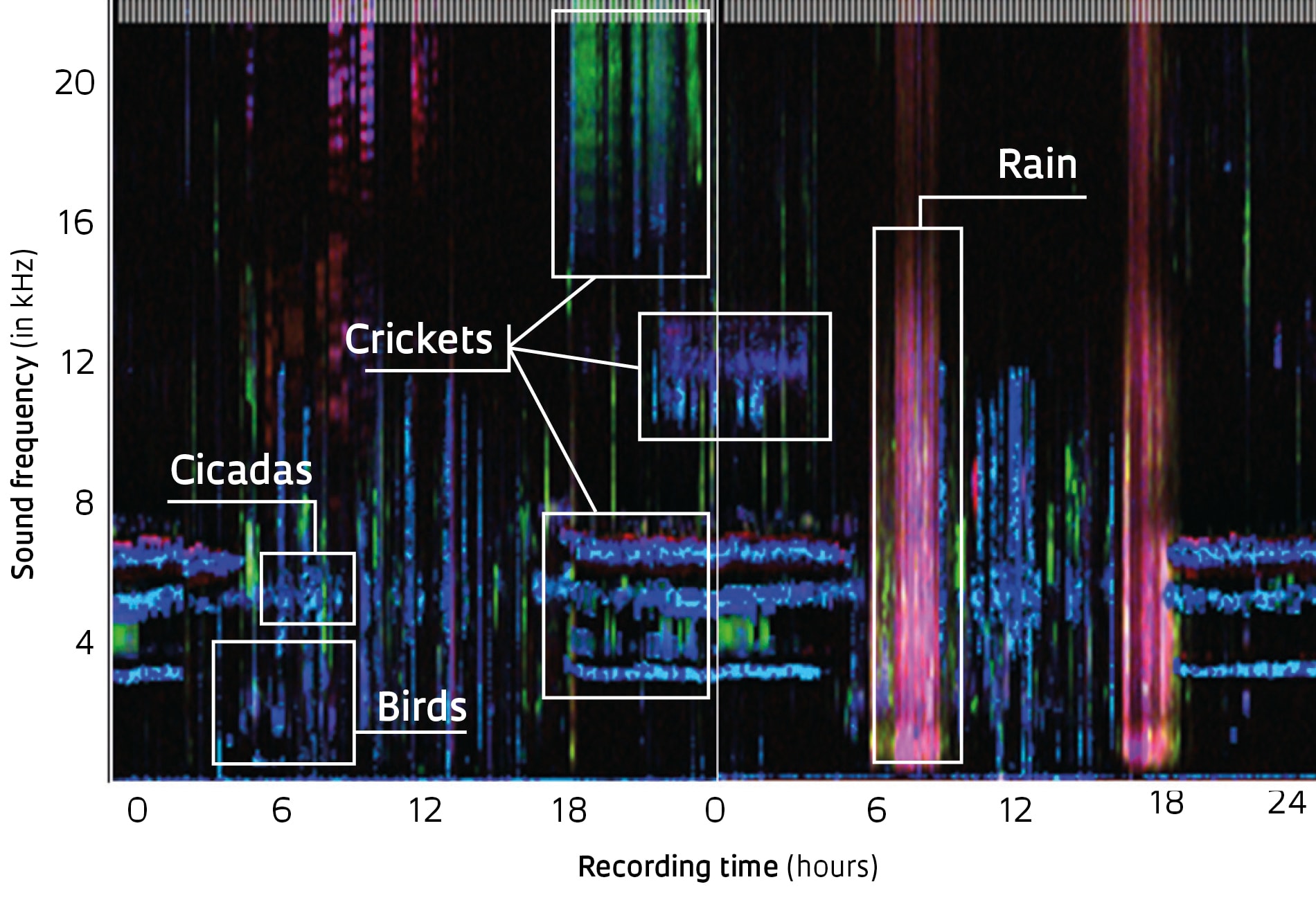 Insect sounds
Vocalizations and other sounds made by the animals were more frequent during the day than at night in the forest nearest the mining area, while the opposite was true for the more distant area. The frequency range in which insects produced their sounds also differed between the first and second locations. Most likely as an adaptation to the noisy environment, they chirped in a narrower frequency range (lower or shriller than the machine noise) at the forest’s edge near the Brucutu mine, while insects in the deeper forest area employed a wider sonic range. With birds, the opposite occurred, the researchers report in an article published in 2015 in the journal Biological Conservation. The calls of some, such as the toco toucan (Ramphastos toco) and the plumbeous pigeon (Patagioenas plumbea), were only heard in deep forest areas far from the mine.

In Natal, Sousa-Lima and his team at the UFRN Bioacoustics Laboratory are working on creating sound profiles of other ecosystems. Last year, biologist Eliziane Garcia de Oliveira made recordings during both the dry and rainy seasons in an area of the Caatinga (semiarid scrublands). She is investigating the impact of wind power generators on this soundscape and, before finding out if anything will change, needed to know the natural behavior of the ecosystem. The initial recordings were surprising. The dry, bleached vegetation is silent for most of the year. There is the distant chirping of cicadas, as well as tweets and warbles of one or another bird. The rain only needs to fall, however, and the Caatinga is transformed: the stridulation of insects intensifies, other birds begin to sing and the chatter of toads, marsh frogs, and tree frogs fills the scrub. “The sonic environment becomes complex,” Oliveira summarizes. It’s breeding time.

In another study supervised by Sousa-Lima, biologist Luane Ferreira compared six acoustic indices with the aural identifications resulting from manually counted sound logs, from three areas of Cerrado in Serra da Canastra National Park in Minas Gerais State. Graphic representations of the soundscape indices and the logs are then correlated to the recordings. As reported in the study, published in 2018 in the Journal of Eco-acoustics, none of the indices fully captured the species diversity of this tropical environment.

Music and environment
The origin of this new area of ecology, formalized in a series of articles presented in 2011 in a special issue of the journal Landscape Ecology, is closely linked to music, in particular the work of American musician Bernie Krause, one of the creators of soundscape ecology. Krause began his career in the 1960s as a studio guitarist and worked with rock bands such as The Doors and The Rolling Stones. With Paul Beaver, he formed the duo Beaver & Krause, which introduced synthesizers in pop music and film. His career began to change in 1968 when he and Beaver were hired by a record label to make a series of unusual albums. The initial work, titled In A Wild Sanctuary, would be the first to include long stretches of nature sounds.

In half a century, Krause has accumulated about 5,000 hours of recordings, with sounds from nearly 15,000 species. They serve for both research and music, including works such as The Great Animal Orchestra Symphony, Symphony for Orchestra and Wild Soundscapes, written by British composer Richard Blackford in collaboration with Krause. Sounds of cicadas, frogs, owls, wolves, gibbons, and humpback whales mix with those of violins, flutes, and other orchestral instruments in the work, which was first performed in 2014.

In a commentary published in July 2018 in the journal Biotropica, a group of biologists and ecologists from the United States, Australia, Germany, and Brazil reaffirmed the need to increase the acoustic monitoring of tropical ecosystems. The text proposes creating a global repository of the recordings, which would be available to everyone. “Soundscape recordings provide a permanent record of a particular location at a given time and contain a wealth of invaluable and irreplaceable data,” the group stated. Recorders have become cheaper and data storage systems have improved. For this reason, they stress, a failure to collect sonic data on tropical ecosystems could present a serious problem for future generations who could benefit from ecology research.