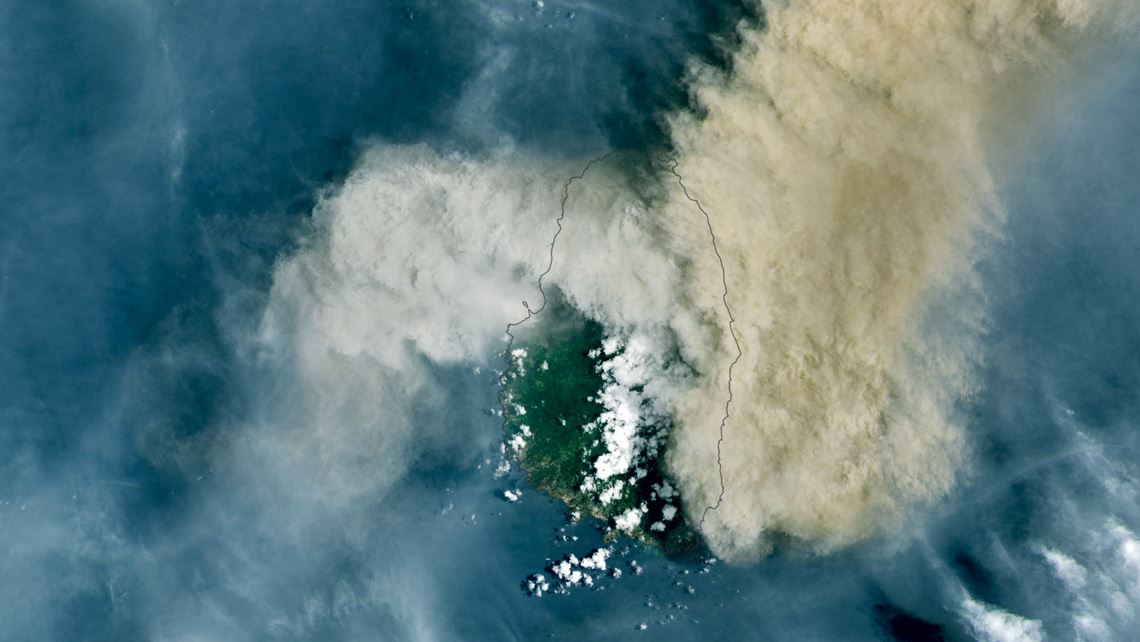 Satellite image of the La Sofrière volcano on the Caribbean islands of Saint Vincent and the Grenadines erupting in April this year: the ash creates aerosols and reduces temperatures

Solar geoengineering is an umbrella expression for various controversial climate interventions that could be deliberately taken to try to cool the planet, but which may have both intentional and collateral effects that have not yet been fully understood by science. The concept encompasses a range of techniques that in theory, could help to counter global warming. In late March, the US National Academies of Sciences, Engineering, and Medicine released a joint report in favor of creating a national solar geoengineering research program to study the impacts of three measures: injecting aerosols (solid or liquid particles) into the stratosphere, above 11 kilometers (km) in altitude; stimulating the formation of marine clouds up to 3 km above the oceans; and thinning the cirrus clouds found between 6 and 13 km in altitude.

Injecting aerosols into the stratosphere and stimulating the formation of clouds over the sea could increase the Earth’s ability to reflect solar rays, which could encourage temporary cooling, locally or even globally. The third method would utilize a different mechanism. Formed of ice crystals, cirrus clouds act as a blanket over the Earth. They make it difficult for heat to escape from the planet’s surface and regulate the temperature. Making them less dense would allow more thermal radiation to escape, making the planet cooler. According to the report, these lines of research would benefit from investments of US$100–200 million over the next five years.

The authors emphasize that a policy of encouraging more research into solar geoengineering does not necessarily mean supporting the implementation of any procedures that intentionally alter the climate. Nor should it serve as a pretext for abandoning or lowering greenhouse gas emission targets established to reduce global warming. Since the end of the nineteenth century, the average global temperature has risen by 1.1 degrees Celsius (°C), which is changing the climate worldwide. If greenhouse gas emissions do not fall quickly, the Earth could warm up by up to 4 °C over the course of this century, with potentially catastrophic consequences for humanity (see article), according to projections by the Intergovernmental Panel on Climate Change (IPCC). 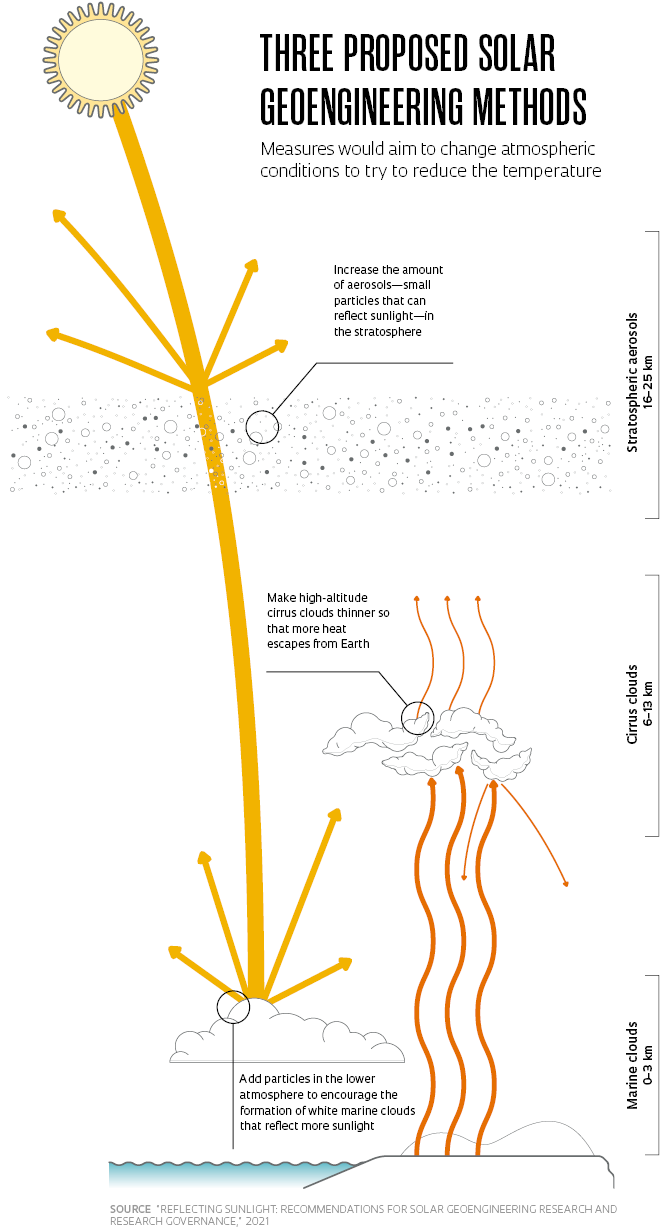 “The research program should be all about helping society make more informed decisions,” environmental biologist Chris Field, director of the Stanford Woods Institute for the Environment and chair of the committee that wrote the report, said in a press release. “As we continue to make slow progress in addressing climate change, we urgently need to understand the full range of options for alleviating its harms. Based on all of the evidence from social science, natural science, and technology—this research program could either indicate that solar geoengineering should not be considered further, or conclude that it warrants additional effort.” There is another aspect of climate geoengineering that the report does not address: the idea of removing greenhouse gases from the atmosphere, especially carbon dioxide, and storing them in different parts of the planet (in the ground, the oceans, or plants).

The first two interventions described in the document are inspired by natural phenomena. Ash from major volcanic eruptions, such as the eruption of Mount Pinatubo in the Philippines in 1991, functions as aerosols in the upper atmosphere, reflecting sunlight  and stopping some of the radiation reaching the Earth, which temporarily becomes cooler. The Mount Pinatubo eruption lowered global temperature by 0.5 ºC for a year. The second technique, to stimulate the formation of low-altitude marine clouds, is also based on a real phenomenon. Particles of air pollution produced by large ships crossing the oceans act as condensation cloud nuclei. In the wake of the ships, white clouds form that make the air immediately above the sea’s surface more white than blue. This increases sunlight reflection in the area and helps cool the planet.

“Our level of scientific knowledge about these three solar geoengineering techniques is quite limited and distinct,” explains physicist Sarah Doherty, from the Department of Atmospheric Sciences at the University of Washington, USA, in an interview with Pesquisa FAPESP. “We know the effects of aerosol injection reasonably well, creating marine clouds less so, and we understand very little about how to make cirrus clouds thinner.” Doherty heads an international initiative called the Marine Cloud Brightening Project, which plans to carry out an experiment increasing the amount of aerosols over an area of ocean to stimulate the formation of marine clouds. Instead of pollution from ships, the aerosols will be composed of sea salt particles. A date for the experiment is yet to be established. “We are working on the climate modeling phase,” she says. Similar tests have already been conducted in Australia and California, with inconclusive results. 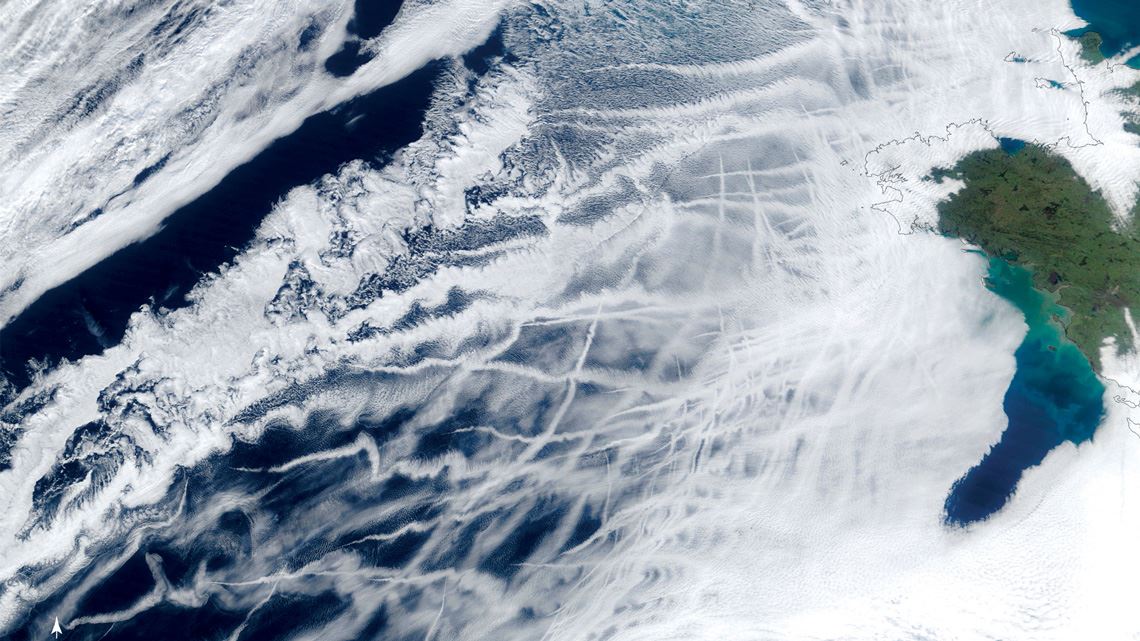 In addition to the risk of unwanted climatic side effects, human interference with the atmosphere is not yet regulated by international and multilateral organizations. “There is no global governance in this area. There is nothing preventing a national government or a billionaire from deciding to fund an initiative without any scientific basis. If an intervention goes wrong, who is responsible for the consequences?” asks Paulo Artaxo, from the Physics Institute (IF) at the University of São Paulo (USP), a specialist in aerosol studies and a member of the managing committee for the FAPESP Research Program on Global Climate Change (PFPMCG). “We need serious and comprehensive studies involving researchers from across the globe, not just from rich countries.” The US Academies report estimates that 90% of papers on solar geoengineering were produced in the USA and Europe. In April 2018, Artaxo and 11 other researchers from developing countries published a commentary in the journal Nature warning that the poorest nations could be the most affected by climate change and by any solar geoengineering measures.

Climate modeling studies that simulate the injection of aerosols into the upper atmosphere indicate that this method could temporarily generate some level of global cooling, but there is a lot of uncertainty about potential side effects. One of the fears is that extra aerosols could damage the ozone layer, which is located in the stratosphere and protects life on Earth from ultraviolet solar radiation. “Solar geoengineering is very controversial and could even be used as an excuse to maintain high greenhouse gas emissions,” points out climatologist Carlos Nobre, from USP’s Institute for Advanced Studies. “Not only could it modify the climate of the stratosphere, but it could alter air circulation on a global scale. Even if it reduces the amount of solar radiation reaching the planet’s surface, these changes to air circulation could also semi-permanently affect rainfall patterns, for example.”

Some research institutions and universities in the USA and Europe have recently created initiatives to research solar geoengineering, involving a series of studies with distinct characteristics. Some are investigating natural phenomena that change the climate. Others are attempting to model climate interventions using computers. And then there are field experiments, which are more controversial. They involve small-scale, temporary changes in a localized region to study possible local and global effects of a geoengineering technique. 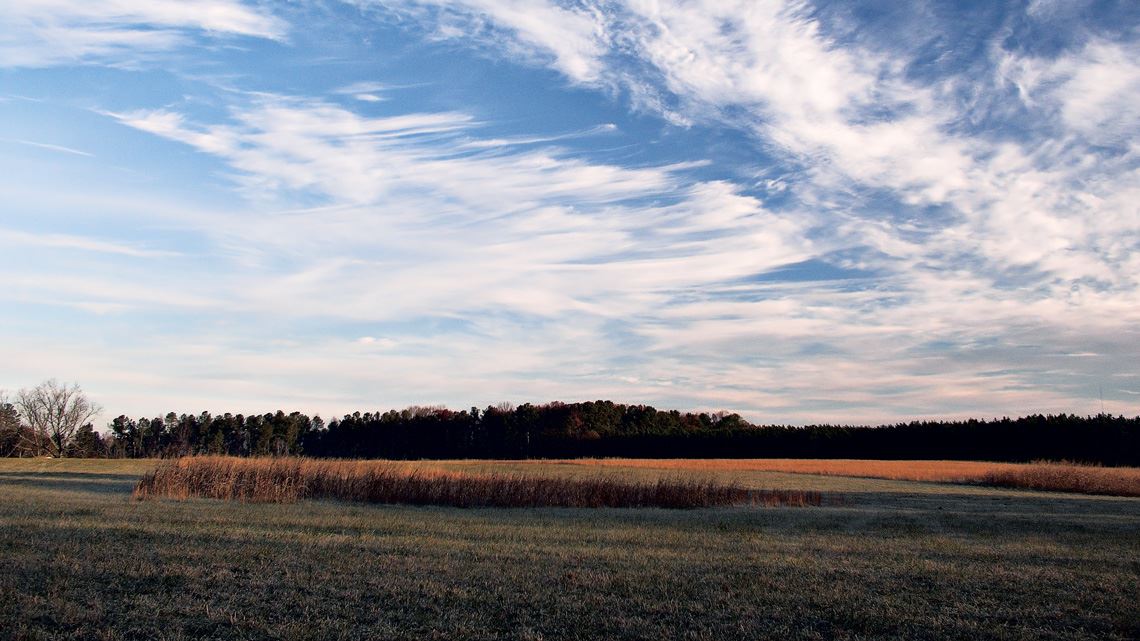 The field experiment currently sparking the most interest is the Stratospheric Controlled Perturbation Experiment (SCoPEx), led by German physicist and chemist Frank Keutsch of Harvard University, USA. The project was designed to be the first test to inject aerosols into the stratosphere, a layer of the atmosphere between 7 and 50 km in altitude. A high-altitude balloon will be used to carry aerosol injection equipment to a height of 20 km, which will then release 2 kg of calcium carbonate particles over an area of 1 km. “This is a very small amount of particles. It is equivalent to the pollution expelled by a commercial jet in just one minute of flight,” says Keutsch in an interview with Pesquisa FAPESP. SCoPEx’s maiden flight was scheduled to take place in northern Sweden in the middle of this year, but was canceled due to protests by environmental and indigenous groups in the Nordic country. No particles would be released on the first flight. The purpose is only to test whether the instruments are working properly. “This episode taught us that we need to better inform people about the objectives of our research,” says the German researcher, who now has to find a new location for the experiment.

For Keutsch, climate geoengineering should only be considered if more research shows it to be effective and safe, and even then, it should be used alongside other measures. He likes to use a medical analogy to highlight the limits and dangers of humanity relying solely on this type of action to combat climate change. He says there is a moral risk that people will likely relax their efforts to mitigate the effects of climate change, instead putting all their trust into the temporary relief of palliative measures. Like analgesics that stop the pain but do nothing to treat the cause, these actions alleviate the problem without actually tackling the source. “The world needs invasive surgery, a drastic reduction in greenhouse gas emissions, not just morphine,” says Keutsch. In the best-case scenario, climate geoengineering could be helpful in reducing the pain while the surgery takes place.