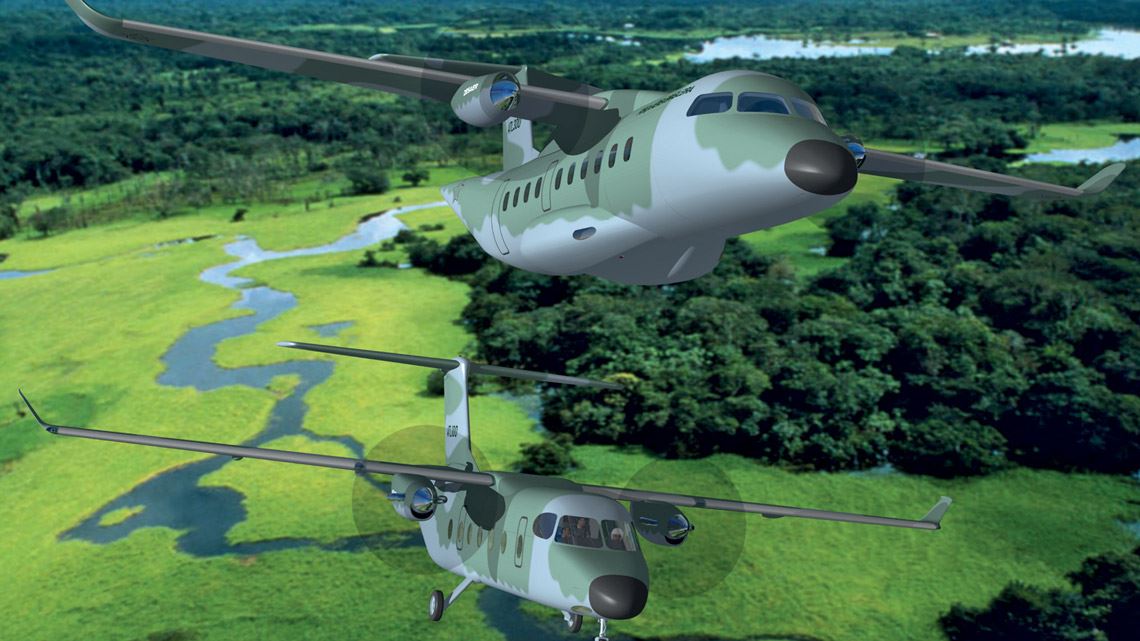 A fleet of 5,700 small aircraft with an approximate 20-seat capacity and 2.5 metric-ton (t) takeoff weight are currently plying the skies around the world. Many of the 14 different models operating in this category were manufactured in the 1970s and 1980s and have now been discontinued. One example is the Bandeirantes, a turboprop developed and built by Embraer between 1973 and 1981. Experts estimate that around 2,000 of these planes will need to be decommissioned and replaced within the next 15 years.

It is this emerging gap that Desaer—an aerospace startup at Incubaero, an incubator sponsored by the Casimiro Montenegro Filho Foundation at the Aeronautics Institute of Technology (FCMF-ITA), in São José dos Campos, southeastern Brazil—hopes to fill. Founded in 2017, Desaer is offering potential customers two aircraft models currently under development.

“We created the company to serve regional airlines, a segment neglected by large aircraft manufacturers,” says founder and CEO Evandro Fileno. “This sector has a demand for small-sized aircraft to connect minor cities.” Brazil, he continues, has more than 1,000 airports but only 60 of them have a constant flow of cargo and passengers. “There’s a huge market to be tapped,” he says.

The ATL-100, the first model to be developed at Desaer (a Portuguese acronym for “desenvolvimento aeronáutico”, or aerospace development), is a simple yet sturdy airplane—a twin-turboprop, high-wing aircraft with a fixed tricycle landing gear. It has a capacity for 19 passengers or three LD3 containers—the standard container size used for air cargo. The plane’s flight range of 1,600 kilometers (km) is equivalent to the distance from São Paulo to Cuiabá.

“The ATL-100 [ATL being Portuguese for “light transport aircraft”] will compete with other modern aircraft such as US manufacturer Cessna’s SkyCourier,” says Jorge Eduardo Leal Medeiros, an engineer in the Department of Transport Engineering at the Polytechnic School of the University of São Paulo (POLI-USP). The Cessna model, also still under development, is slated to enter commercial service within the year. Franco-Italian aircraft manufacturer ATR currently dominates the global market for turboprops, with a current offering of four different models, all of them larger than the ATL-100, with a seating capacity starting at 30 passengers. Embraer also manufactures aircraft for regional airlines, although all of them are jet-powered, larger models seating 70 or more passengers.

Fileno, who previously worked for 20 years at Embraer, agrees that the SkyCourier is similar to the ATL-100 in design and capacity, but says the Brazilian model has a differentiator from its competitor. “Our plane has a rear loading ramp that allows it to be loaded without the need for container lifts. The Cessna SkyCourier is loaded and unloaded via a side cargo door that is not accessible from the ground,” he explains. Another benefit of the ramp is greater accessibility for people with disabilities. “We’ve also been approached by customers in the medevac segment—being able to easily bring patients aboard on stretchers offers an advantage over regular aircraft with above-ground doors.”

From his early talks with prospective buyers of the ATL-100, Fileno realized there could be demand for a larger aircraft model. Desaer has since decided to develop a second, 40-seat model—the ATL-300—with a 4 t takeoff weight. This model similarly has a rear cargo ramp but is more sophisticated, with a pressurized cabin and retractable landing gear, allowing it to fly at higher altitudes—the ATL-100 is non-pressurized.

The estimated price tag on the ATL-100 is US$5.5 million—in the same range as the Cessna SkyCourier—while the ATL-300 version will cost US$20 million. Desaer is currently preparing the reports needed to certify the two models with Brazil’s National Civil Aviation Agency (ANAC). “The ATL-100 project is at 58% progress. We estimate that another year and a half of engineering will be needed before we build the first prototype,” says Fileno. “Because we only started on the ATL-300 last December, development progress is currently at just 6%. It will take another two years and a half to build our first prototype.”

With a technical staff of 36 engineers, Fileno has invested R$ 700,000 out of his own funds across the two projects. He is now looking to raise funding from investors and potential partners. The COVID-19 pandemic could not have come at a worse time. Talks with prospective buyers were stalled due to the economic uncertainties stemming from the health crisis. On the upside, growth in e-commerce during the pandemic created added demand for airfreight to non-major cities.

FCMF-ITA Chairman Luiz Sérgio Heinzelmann believes there are other factors working in favor of Desaer’s two aircraft models. “Both are ideally suited to fly Amazon routes. They can take off and land on short, unpaved runways, connecting villages unreachable by larger aircraft,” he says. As another favorable development, he expects Brazilian aviation regulations will soon require flights in the country’s North to be operated exclusively by twin-engine aircraft in replacement of the current fleet of single-engine airplanes—twin aircraft are in theory safer because if one engine malfunctions, they can use the other to stay airborne. The new legislation, if enacted, would create demand for aircraft like Desaer’s ATL models.

Turbulence zone
As it develops the two aircraft, Desaer plans to build a manufacturing site to produce them in Araxá, Minas Gerais State, where it will benefit from tax incentives offered by the municipal government. The plant will operate as an assembly line using off-the-shelf components—any customized components will be developed with partners. Construction of the manufacturing site is expected to begin this year, with the plant having an estimated capacity to produce four airplanes of each model per month.

Fileno is undaunted by the many challenges and uncertainties that a project of this complexity entails—including a strengthening US dollar, rising prices on imports, and their effects on an aerospace value chain that is highly dependent on imported materials and components. “Developing a new product from the ground up, especially something as complex as an airplane, will always involve risks,” he says. “We already half prospective orders for five ATL-100s from a Brazilian company and another seven from a Uruguayan company. This gives us assurance that we will be able to attract investors and accelerate development of our aircraft and the plant.”

Desaer is relying on innovation to navigate the turbulence. The ATL-100 has already secured four patents, including one for a container loading and unloading system. Solutions like these are helping to attract partners and funding. In February, the company closed a deal with electric propulsion company magniX to develop a hybrid-electric model—the ATL-100H—with two conventional engines and two electric propulsion units.

“Desaer is targeting a segment with real operational demand. And the aircraft they’re developing are simple yet robustly designed,” says Fernando Teixeira Mendes Abrahão, a professor at ITA’s Logistics Engineering Lab. “But their product is still in development. There’s still a long way to go before their aircraft are operational and a viable option for the market.”