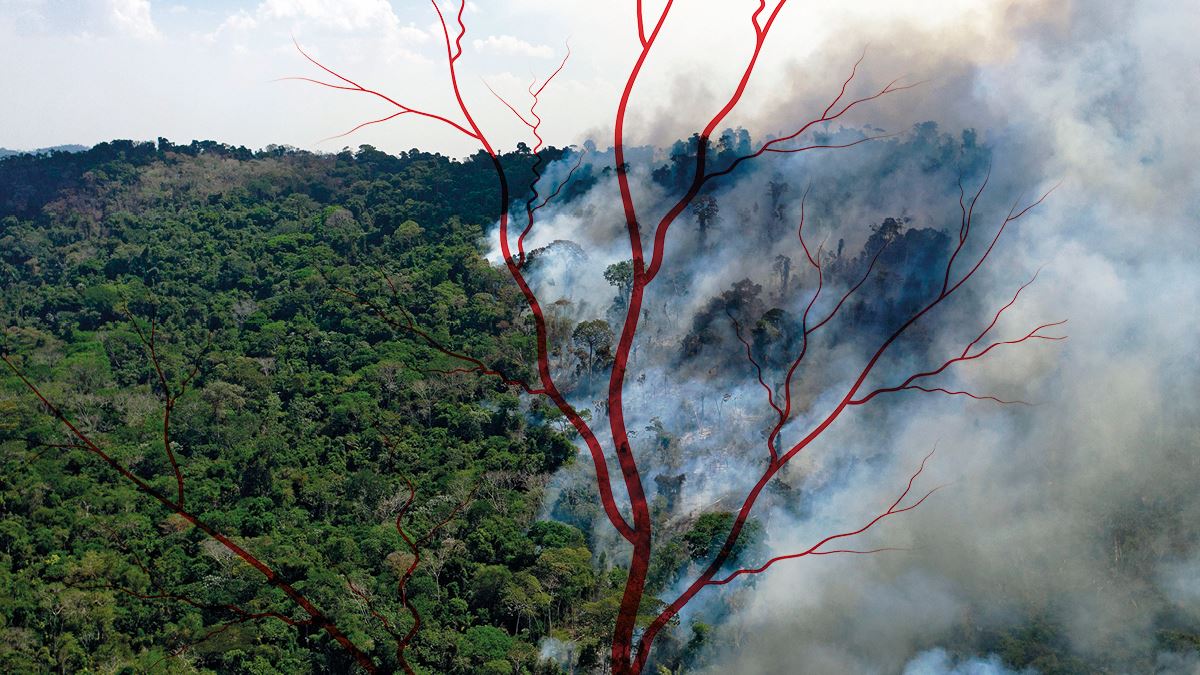 Arteries of destruction: montage over an aerial image of a fire in the Amazon rainforest, Pará

Technological platforms capable of forecasting the risks of deforestation and the impact of forest fires could serve as important aids in protecting Brazilian biomes, especially the Amazon. The PrevisIA platform, created in collaboration by the Institute for Humans and the Environment in the Amazon (IMAZON), Microsoft, and the Vale Fund (run by the mining company of the same name), uses geostatistics and artificial intelligence (AI) to map forest areas under threat. “The aim is to provide information to allow public officials to act preventively and prevent deforestation,” says geographer Carlos Souza Jr., an associate researcher at IMAZON.

The developers of PrevisIA used AI to supplement this historical deforestation data with information about new roads created in the Amazon, identified using satellite images. Other variables used to estimate deforestation risks include land use, socioeconomic activities in the region, topography, and rivers. The images used to detect roads are collected by the European Space Agency’s Sentinel-2 satellite and processed on Microsoft’s Azure cloud platform.

“This set of information makes it possible to understand the dynamics of deforestation and identify the active frontiers—the forest areas most at risk in the short term, something like the next 12 months,” explains Souza Jr. One example is the mapping of unauthorized roads created in the rainforest—what the geographer calls “arteries of destruction.”

Studies show that 95% of deforestation and 85% of fires in the Amazon occur within 5.5 kilometers (km) of these roads. Geostatistics give scientists an insight into the land occupation and land use over time in the vicinity of each road. The AI algorithm developed by IMAZON can detect roads in satellite images that do not appear on official maps and estimate the area of rainforest under their influence. These roads are generally associated with illegal logging and mining and unauthorized occupation of public land.

In 2021, PrevisIA has detected 9,635 square kilometers (km²) at risk of deforestation, which covers 18 conservation units that contain high or very high-risk areas, 192 municipalities, 48 indigenous reserves, two quilombola territories, and 789 rural settlements. Over the course of the year, the team behind the platform has compared the projection against indicators issued by IMAZON’s Deforestation Alert System (SAD), which identified 2,095 km² of deforestation in the Legal Amazon in its July 2021 bulletin. “Our accuracy level has been very high. Around 80% of deforestion has occurred in areas we indicated as medium, high, or very high risk,” states Souza Jr.

The PrevisIA platform is open to the public and can be accessed at https://previsia.org. The creators of the tool are committed to establishing partnerships with users who can take full advantage of the available data, such as municipal, state, and federal authorities. The idea is also for it to be used by banks whose credit policies include sustainability criteria, insurance companies attempting to reduce risk, and companies striving to establish production chains based on by legally sourced inputs. One project is already underway with Pará’s state prosecution service, which wants to provide municipal prosecutors with the information needed to prevent and control deforestation on a local scale.

Another initiative planned by the PrevisIA team is to design a map of actions that could be implemented by public and private agencies to prevent deforestation. One suggestion is to encourage the generation of financial income by Reducing Emissions from Deforestation and Forest Degradation (REDD+), an economic mechanism created by the United Nations Framework Convention on Climate Change (UNFCCC) with the objective of remunerating people and organisations who implement preventive actions designed to preserve forests.

Every increase to the devastation of the Amazon has major repercussions on the planet as a whole, affecting the amount of carbon dioxide (CO2) in the atmosphere due to lower absorption by vegetation through photosynthesis. Emissions from fires associated with deforestation can also impact rainfall across South America, impacting agricultural production and supplies for food production chains worldwide (see Pesquisa FAPESP issue nº 285).

The situation led researchers from the School of Geographical Sciences at the Nanjing University of Information Science and Technology, China, to search for technological approaches that could improve the information available on fires in the Amazon and provide real-time access. In June, they published an article in the scientific journal Remote Sensing, arguing that Vegetation Optical Depth (VOD), which uses data from satellites equipped with microwave radar technology, is the most efficient tool.

According to Ricardo Dal’Agnol, an environmental engineer and researcher at INPE’s Earth Observation and Geoinformatics Division who worked with the Chinese scientists and is one of the authors of the article, VOD is capable of detecting the water content of vegetation and determining the moisture level of an area of forest. “With these data, it is possible to differentiate between vegetation in a normal state and plants affected by fire,” says Dal’Agnol, who is carrying out a postdoctoral research project with funding from FAPESP.

Forest fire monitoring systems traditionally use optical data obtained by satellites such as Landsat, which INPE uses to survey the Amazon region. Optical instruments use visible or infrared radiation to identify hot spots. “They’re good for detecting what’s happening in the forest canopy, but not for what’s happening on the ground. And most forest fires start on the ground, often not even reaching the top of the canopy,” says Dal’Agnol.  The canopy is the highest part of the forest, comprised of the tree tops.

Microwave radar has another advantage over optical readings, according to the researcher. “The equipment is less affected by atmospheric interference during data collection. Clouds and smoke do not impact the reading, as occurs with optical systems,” he says.

Dal’Agnol reports that the researchers from Nanjing University have discussed the idea of developing a real-time monitoring system based on VOD technology for fires in the Amazon rainforest, but the Brazilian government has yet to show any interest in investing in the project. According to INPE, 39,427 fires were recorded in the Amazon rainforest between January and August of this year—fires would be a rare occurrence in such a wet biome if it were not for human activities.

The Annual Mapping Project for Land Use and Cover in Brazil (MapBiomas) found that between 1985 and 2020, an average of 150,957 km² was burned in Brazil every year—an area larger than the size of England. The cumulative total for the period was 1,672,142 km², about 20% of the area of Brazil. Eighty-three percent of fires occur during the dry season between July and October, and of Brazil’s five biomes, the Pantanal was proportionally the worst affected, with 57% of its territory burned at least once in the study period.

A team of civil engineering students studying environmental sciences at the Federal University of Paraná (UFPR) developed a method that uses AI resources to predict forest fire risks based on weather conditions. The computational model used data on fires monitored by satellites under INPE’s Queimadas Program and meteorological data, such as temperature, solar radiation, wind speed, humidity, and rainfall, from the Brazilian National Meteorology Institute (INMET).

A first test of the system was carried out in the Chapada das Mesas National Park in the state of Maranhão. “We forecasted fire outbreaks up to 12 hours in advance, with a success rate of 83%,” says the project coordinator Fábio Teodoro de Souza, a civil engineer and professor from the graduate course in urban management at the Pontifical Catholic University of Paraná (PUC-PR). The result was achieved by reading data three times a day from a meteorological station 34 km away from the national park. “With more frequent readings at meteorological stations closer to the location under analysis, the success rate could reach close to 100%,” estimates the PUC-PR professor.