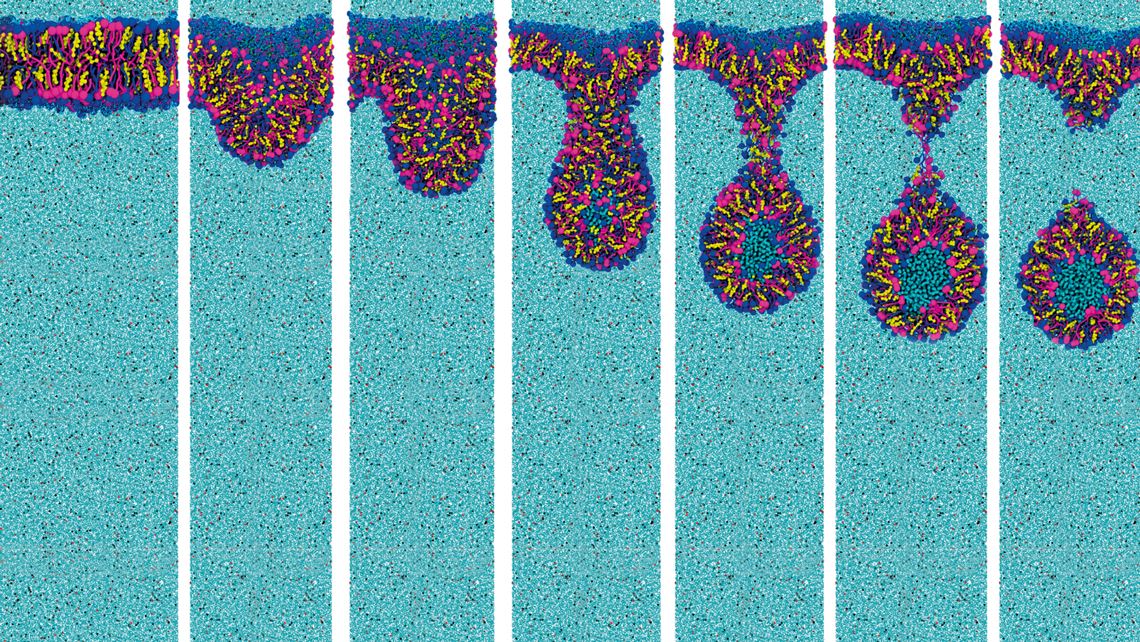 Computer testing shows the formation process of vesicles, "blisters" that can transport water when an electric field is applied to a skin model

Researchers at the Federal University of ABC (UFABC) performed computer simulations of a little-known biological mechanism that if properly controlled, could allow soluble substances, including drugs, to pass through the skin directly into the bloodstream. In digital tests, a group led by physicist Herculano Martinho, from the institution’s Nanosciences and Advanced Materials Graduate Program, found that applying a small and constant external electric field to the skin—with an electricity level similar to the amount created by the friction of a comb running through hair—facilitates the entry of water into the body, including any substances dissolved in the water.

The researchers created a computer model of human skin that contains more than 300,000 atoms, with the aim of studying its behavior under different conditions. By applying an electric field, they observed the formation of vesicles (membranes similar to small blisters) filled with water that were able to cross the barrier of the epithelium, a tissue that covers and protects the skin and mucous membranes. “Water-soluble drugs can ‘hitch a ride’ in these vesicles and be directed to specific organs. Experimental research has identified this means of transport in the past, but there is no evidence about its direct mechanism,” explains Martinho. “Until now, the only hypothesis for how it works was the possible formation of pores. Our work suggest it would be possible to achieve through the production of vesicles.”

The study is part of biologist Neila Cristina Fonseca Machado’s postdoctoral research at UFABC, and was the basis for a scientific article published in the journal Physical Chemistry Chemical Physics in April this year. Also participating in the study were biologist Marcelo Christoffolete of UFABC and physician Clarissa Callegaro, a colleague who works at a private dermatology clinic. The research group’s next step is to validate the digital model in laboratory tests with artificial skin, real electrical currents, and transdermal diffusion membranes, which will play the role of the vesicles.

A more detailed understanding of how skin permeability functions would increase the potential development of medications and therapies to minimize the side effects of oral drug administration. From this new perspective, the skin is no longer considered merely a natural barrier that prevents foreign compounds from entering the organism—it is instead seen as a possible means of entry for personalized pharmacological treatment in the field of precision medicine.

Machado, who was responsible for modeling the molecules of the virtual skin, explains that the study went beyond simply observing the passage of water from the outside of the skin to the inside. “We also showed that by changing the level of the electric current, it is possible to control the tissue permeability, which is of major significance to the pharmaceutical and cosmetics industry,” says the biologist.

Martinho says that his team came across induced skin permeability by chance while investigating another topic. The initial aim of their research was to study the aging process and its effects. To this end, the team simulated a virtual skin exposed to solar radiation and different wavelengths of light. “We tested countless variations until we decided to apply a constant electric field. That’s when something we weren’t expecting happened,” recalls the physicist.

The simulation generated structures capable of transporting water from the surface of the skin to the interior—the unexpected vesicles. The skin has always been considered an impermeable tissue, but the digital tests described in the article suggest that under certain conditions, this property can be altered. “We started to look at whether there was any information in the scientific literature about this cutaneous property, and we found some experimental research in the field of electrophoresis [a technique used to separate molecules based on their size and electrical charge], but the mechanism involved in transporting substances through the skin topically was unknown,” says Martinho.

The application of electric fields to the skin is not a total novelty in fields such as physiotherapy and dermatology, explains Callegaro. “There is a technique called iontophoresis, which uses electric fields to increase drug absorption by the skin. It is used to treat hyperhidrosis, for example, meaning excessive sweating in the armpits, feet, and hands,” says the dermatologist. “We know that iontophoresis works, but prior to our research, we didn’t know how it worked at the molecular level.” Machado recalls that after seeing a strange structure on the virtual skin during their simulations, they contacted Callegaro to ask whether it was a modeling defect. It was not. It was the vesicles.