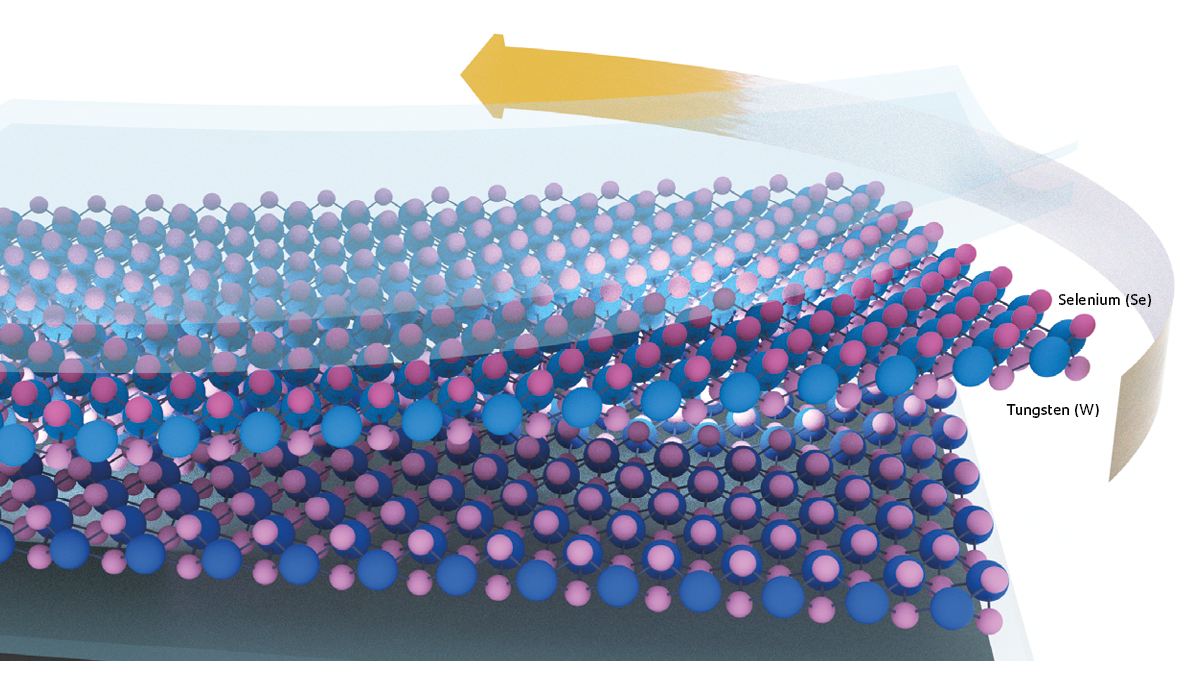 By slightly misaligning two overlapping layers of tungsten diselenide (WSe2) nanofilm, a material with a hexagonal structure similar to graphene, and controlling the number of electrons within them, a group of physicists at Columbia University in New York observed a distinct manifestation of an expected quantum phenomenon. As the variables were manipulated, the system gradually and smoothly, with no sudden changes, transformed from a metal capable of conducting an electrical current into an insulator. The fact that tungsten diselenide can transition from a metal to an insulator is not a surprise, since it is known to be a semiconductor material, like the silicon used in computer chips. This quantum property is the defining characteristic of a semiconductor. The surprise was in the slow and gradual way the change of state took place.

“This transition usually occurs abruptly,” explains Brazilian physicist Augusto Ghiotto, lead author of an article published in the scientific journal Nature on September 15 describing an experiment involving twisted WSe2 films at extremely low temperatures of around -260 degrees Celsius (°C). “Our results indicate that twisted WSe2 could provide a new platform for studying quantum phase transitions.” Born in Bauru in the state of São Paulo, Ghiotto has been living in the US for nine years. He graduated from Columbia University, where he is now studying a doctorate in the physics of condensed matter and is part of a research group led by physicist Abhay Narayan Pasupathy.

Tungsten diselenide is known as a two-dimensional (2D) crystalline material, a type of solid comprising a single layer of atoms arranged in a certain pattern. This particular geometry is key to explaining the special properties of these 2D materials under certain conditions, such as superconductivity. Interest in the field of study has been growing since the 2004 discovery of graphene films, considered the first known 2D material. More recently, a series of experiments indicated that overlaying two or more films of 2D material and slightly rotating one of these films can generate special effects. This rotation of overlapping layers led to the emergence of a new subfield in materials science called twistronics.

In some cases, misaligning one of the films by just 1.1 degrees is enough to have an effect on the electronic properties of the material (see Pesquisa FAPESP issue no. 302). With WSe2, the angle of the twist that causes the system to completely change its characteristics from a metal to an insulator varies between 4 and 5.1 degrees. Tungsten diselenide is classified as a transition-metal dichalcogenide, a class of materials formed of the atoms of a transition metal (in this case, tungsten) and a chalcogen (selenium). The electrons in transition metals can participate in the formation of certain types of chemical bonds. The elements in group 16 of the periodic table are called chalcogens (the most commonly used in scientific experiments are oxygen, sulfur, selenium, and tellurium). “Experiments with transition-metal dichalcogenides are fascinating because they provide access to a region of the quantum phase diagram that reveals the physical effects of strongly correlated systems,” says Brazilian physicist Gabriel Schleder, who is doing a postdoctoral fellowship at the School of Engineering and Applied Physics at Harvard University, USA. “These effects are general, not only applicable to a specific system, and can help us understand the fundamental physical theory behind them.”

According to Ghiotto, the results of the twisted WSe2 experiment could be useful in studies of a mysterious phase (state) of condensed matter called quantum spin liquid. The theory of this phase, which despite its name is actually a solid, was proposed in the early 1970s and has not yet been irrefutably observed in any material. It is characterized by the direction of its spin—an intrinsic property of subatomic particles, such as electrons, associated with their interaction with magnetic fields—being unstable or irregular. They usually follow a pattern: either all pointing up, all down, or alternating between up and down. Some research suggests that the quantum spin liquid phase, which would manifest at temperatures close to absolute zero, may be behind phenomena such as superconductivity and could be useful in quantum computing. Since changing the quantum phases of WSe2 films seems dependent on fine modulations, this 2D material could be an interesting platform for research on quantum spin liquid.