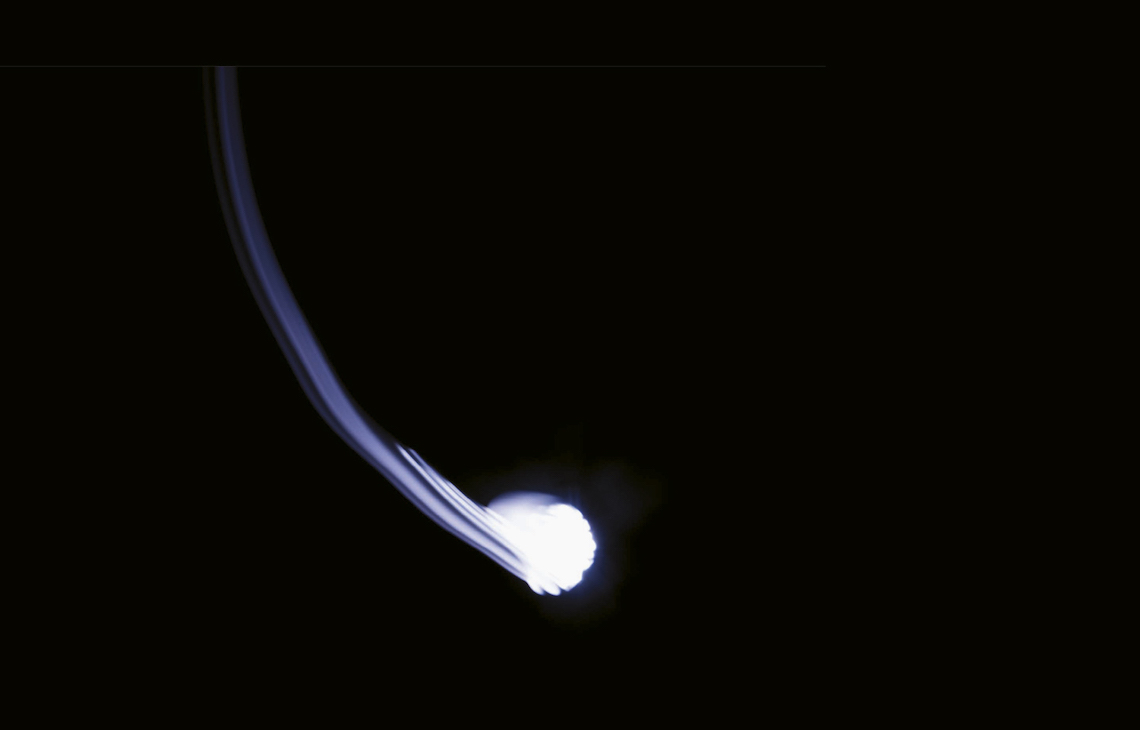 Light moves faster than anything else in the universe, but it can be brought to a complete stop as it travels through space, according to a theoretical method proposed by three researchers, one of whom is based in Brazil. Based on numerical simulations, the three scientists demonstrated that it is possible to stop pulses of light as long as their trajectory is confined by waveguides—physical structures that direct light (such as optical fibers or channels)—arranged in such a way as to create singularities. The mathematical concept relies on what is known as the exceptional points of a system (in this case, light passing through waveguides), at which unusual or undefined properties arise. When passing through these points, the speed of a light pulse is reduced to zero, according to mathematician Alexei Mailybaev, from the Institute of Pure and Applied Mathematics (IMPA), Rio de Janeiro, and physicists Nimrod Moiseyev, from the Israel Institute of Technology (Technion), and Tamar Goldzak, a postdoctoral fellow at the Massachusetts Institute of Technology (MIT), USA.

The new method differs from other approaches pursuing the same objective, because the light decelerates completely without losing its original intensity, according to the article published in the scientific journal Physical Review Letters on January 3. In other theoretical techniques, the light intensity weakens before it comes to a stop. At exceptional points, the various waves that make up a pulse of light behave as one, which is essential to maintaining its intensity when it stops. However, Mailybaev points out that there are technical limitations to putting the idea into practice. “It would be difficult to record whether the light actually stopped,” explains the Russian mathematician, who now lives in Brazil. He has been working with Nimrod Moiseyev’s research group for eight years. “Recording where the signal is in the waveguide at any given time, which is necessary to calculate any changes of speed, is a complex process. But these technical difficulties can be overcome.”

Light is created by the vibrations of electric and magnetic fields. Physicists use mathematical equations to represent the properties of these waves, such as their frequency, amplitude, energy, and speed. Mailybaev says that the idea of studying how to stop light resulted from a discussion between the three researchers regarding physical phenomena that emerge from singularities in mathematical calculations. “Out of curiosity, we wondered what would happen to light in these unusual situations,” recalls the IMPA researcher. They did the math and realized that when passing through these exceptional points, the speed of light would be zero. They then began to investigate ways of creating exceptional points in structures that direct light—waveguides—and formulated a proposal. By placing two waveguides adjacent to each other and adjusting their parameters so that the intensity of a light beam increases in one waveguide while decreasing in the other, an exceptional point is created where the beam of light stops moving. This is because one waveguide gains energy at exactly the same rate as the other one loses it. “The advantage of our proposal is that it covers a large number of parameters in a modifiable structure,” says Tamar Goldzak.

Slower light
In a vacuum, light travels at a constant speed of approximately 300,000 kilometers per second (km/s), but when light moves through other media, such as air or water, it naturally decelerates. The formation of a a rainbow, for example, would not occur if light traveled at the same speed in water (where it moves at approximately 225,000 km/s) and air (where it is just slightly slower than in a vacuum). Over the last two decades, physicists have been trying to control light and have obtained surprising results. In 1999, a group led by Danish mathematician and physicist Lene Hau at Harvard University, USA, experimentally reduced the speed of light to 17 meters per second by firing a laser beam through an ultracold atomic gas known as a Bose-Einstein condensate. In 2001, the team took a step further and stopped light for 1 second within a similar system.

Hau’s method has since enabled scientists to turn light upside down, decelerate it, accelerate it, and store it. However, before it can reach a speed of zero with this method, the light dies out and almost its entire form is imprinted on the structure of the atoms, like a kind of digital light. “Reducing the speed of light in ultracold gases is great for basic research, but it is unlikely to result in any real-world applications,” says physicist Thomas Krauss, from York University, UK. Mailybaev, Moiseyev, and Goldzak believe their proposal has greater potential for applications because the exceptional points could be used to control waves of any type (including light, sound, and others) regardless of the medium through which they are travelling. Even waves moving through water could be controlled by this method, according to the researchers. “Slower light interacts more with matter,” says Emiliano Martins, an expert in guided waves from the São Carlos School of Engineering at the University of São Paulo (EESC-USP). “This characteristic is essential to the development of telecommunications and optical data processing.”