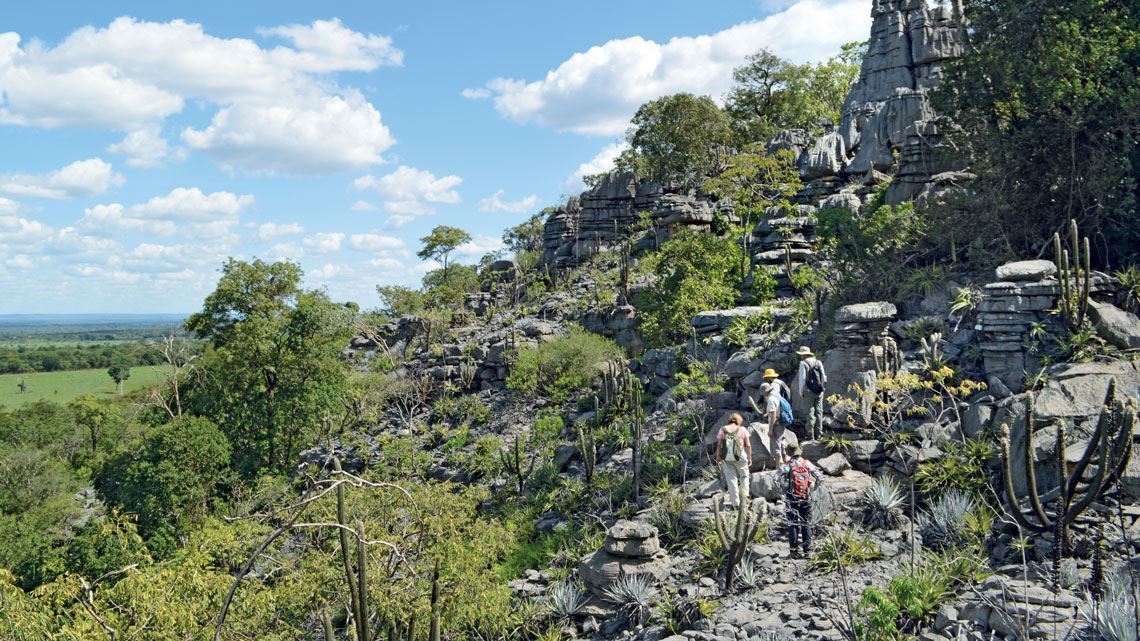 Fifty-meter-high rock walls surround a vast plain in the states of Minas Gerais, Bahia and Goiás in Brazil’s interior. About 550 million years ago, when South America, Africa, and Antarctica were still a single continent, there was an inland sea at this location, unconnected with any ocean. With an area of about 350,000 square kilometers (see Pesquisa FAPESP issue no. 220) it was similar in size to the Caspian Sea, a similar closed basin between Russia, Azerbaijan, and Iran.

The São Francisco sedimentary basin, where this “Bambuí Sea” was once located, had one peculiarity: the salt water released methane gas, one of the gasses responsible for raising global temperatures, according to studies by geologists from the University of São Paulo (USP) and Federal University of Minas Gerais (UFMG). The researchers think that once it entered the atmosphere, the methane may have contributed to mitigating the planet’s climate, reducing the intensity of glaciations and stimulating the diversification of life forms between 540 million and 520 million years ago, when mollusks, sponges, echinoderms, and arthropods appeared. However, they haven’t yet estimated the volume of gas the sea released, or how much of it would have been required to modify the terrestrial climate, important data necessary to strengthen their hypothesis.

Geologist Sergio Caetano-Filho, from the Geosciences Institute (IGC) at USP, arrived at his hypothesis after examining 520 samples of limestone rocks and 198 organic material samples extracted in October 2017 from quarries in Januária, in northern Minas Gerais, and Santa Maria da Vitória, in southern Bahia State. These were added to data from similar materials extracted from an oil well and a borehole in the region of Arcos municipality in Minas Gerais. The study is part of his doctorate, which he defended at the beginning of November this year. Completed in 2019, the analyses showed a predominance of the heaviest form of carbon, isotope 13 (13C), compared to isotope 12(12C), in proportions up to 15 times greater than was found in rocks such as those of the Corumbá group, in the Pantanal region.

According to Caetano-Filho, the excess of 13C could be due to the activity of a group of primitive microorganisms, Archaea, which transform organic matter into carbon dioxide (CO2) and methane (CH4). As a result, an environment hostile for other organisms may have formed, one poor in oxygen and rich in sulfur in the form of hydrogen sulfide, which is very toxic to living things. The geologist notes that the rocks at the edges of the ancient Bambuí Sea still exude a rotten egg odor, characteristic of hydrogen sulfide. This composition would explain the scarcity of marine fossils embedded in the rocks of the Bambuí Sea; in similar rocks of the Corumbá group, by contrast, marine fossils are common. He and other colleagues at USP and universities in Minas Gerais and Paris detailed their results in an article published in April in the journal Geoscience Frontiers.

“The fact that the Bambuí Sea was probably a toxic environment for living organisms explains the extreme scarcity of fossils in the region”, says Marly Babinski, from IGC-USP and Caetano-Filho’s doctoral advisor. She identified the predominance of the heaviest forms of carbon in her own doctoral research 30 years ago, initially attributing it to an accumulation of organic matter, a hypothesis that was not supported. 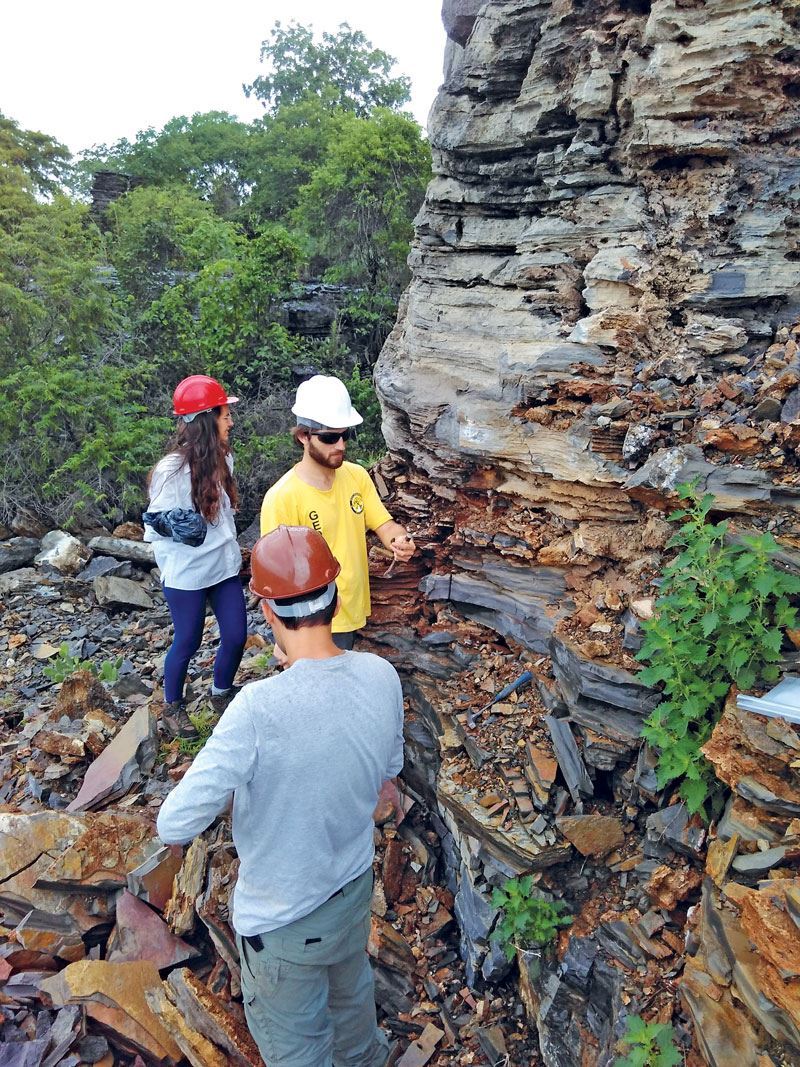 “The Bambuí sea probably wasn’t an isolated case,” suggests Caetano-Filho, “because there are other closed seas with the same geological age and very similar geochemical signs.” Such would be the case, he says, of the Irecê basin in Bahia, which is part of the same geological unit—the São Francisco craton—and the Hüttenberg formation, in Namibia, southern Africa, which might have reinforced the release of methane into the atmosphere.

If the hypothesis turns out to be correct, it’s possible these closed seas were the source of methane that helped to raise the temperature and reduce the impact of glaciations. In addition to the greater supply of oxygen and nutrients, higher average temperatures than in the cold epochs of previous geological periods may have contributed to the gradual diversification of life forms.

“There are no modern analogues to the Bambuí Sea, which makes analysis very difficult,” says geologist Gabriel Uhlein, at UFMG. In a study published in September in the journal Precambrian Research, Uhlein argues that the erosion of elevated land on the banks of the Bambuí Sea may have contributed to the excess of 13C in the waters; in addition, sediments from now extinct rivers may have supplied the sea with carbonate, which can form methane upon decomposition. In his view, the release of methane would clearly have had a local effect.

“But since Bambuí is a small basin compared to the size of Earth, it’s still uncertain whether it could have released enough methane to interfere with the global climate,” he says. Caetano-Filho counter-argues: “The Bambuí Sea was probably larger, before being pushed in by mountains and isolated. And if other basins also went through an intense methane production phase, the impact on the atmosphere may have been considerable.”

Since 2019, Uhlein and his team have been collecting organic rocks, limestone formed by cyanobacteria, salt crystals, and other signs of tidal variation in the rock walls of Januária and Ubaí, in northern Minas Gerais. Their findings raise other doubts: “Either there were connections between the Bambuí Sea and the ocean that we haven’t yet discovered, or the gravitational relationship between Earth and the Moon, which causes the tides, was different 550 million years ago, and resulted in higher tides than those currently found in the great continental seas like the Caspian.”

“The distance between the Moon and Earth varies constantly and it was different half a billion years ago,” comments geophysicist Eder Molina, from USP’s Institute of Astronomy, Geophysics, and Atmospheric Sciences (IAG). “Currently, the moon moves approximately 3.8 centimeters away from Earth per year,” he adds. Furthermore, 400 million years ago, the Moon spun faster and would have been 40% closer to Earth than it is today. Under these conditions, the tide would have risen higher than it does now, and a month—defined as the time needed for the Moon to make one complete turn around Earth—would only have been nine days long.