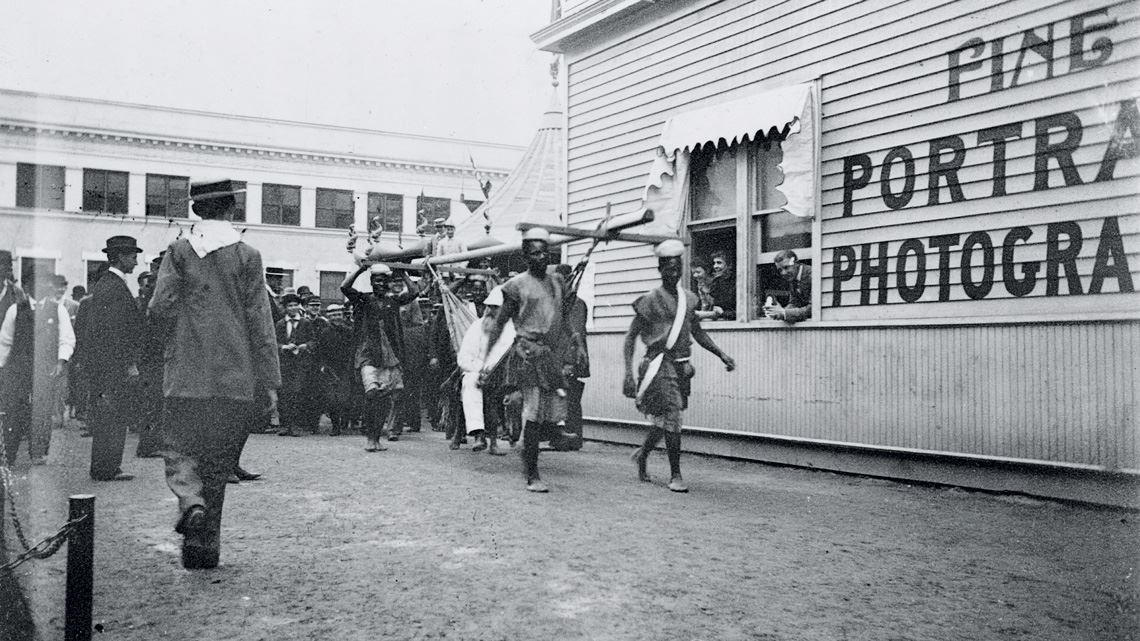 An image from 1893, entitled Cannibals carrying their master, photographer unknown, archived at the Library of Congress in Washington, DC

Courtesy of the Library of Congress, Washington

The exhibition of other human beings as attractions is recognized as a historical episode that reflects the depth of racism during the colonial empires of the nineteenth and early twentieth centuries. The study of this phenomenon, as examined through the concept of “human zoos,” has gained momentum around the world over the last two decades and brought to the surface a gamut of practices of domination, classification, and stigmatization of the other. At the same time, such studies have revealed that the machinery of these practices also mobilized the scientific discourse, the taste for spectacle, and the implementation of new technologies, particularly photography.

Based on images produced at the height of the human zoo era, the recently published Zoológicos humanos: Gente em exibição no tempo do imperialismo [Human zoos: People on display in the time of imperialism] [UNICAMP], by photography historian Sandra Koutsoukos, systematizes the lives and relationships of individuals exhibited as curiosities and viewed as objects of study. Her research, the result of a postdoctoral internship funded by FAPESP, examines not only the phenomena that were most clearly inspired by zoos, but also the “variety spectacles” and hospital patients indiscreetly presented for public entertainment.

In the second half of the nineteenth century, photography became a common tool used by many professionals to record their own work, such as a scientist who measured people’s skulls to classify them according to his conception of race, or an impresario who sought to attract audiences through sensational postcards, and physicians who cataloged their most unusual cases. By examining such documentation or advertising material, historical research can reconstruct much of the context and subtext out of which the visual record arose.

“A photograph, by itself, doesn’t tell a story, but it does give the researcher the opportunity to pursue it,” says Koutsouko. “One must look at what’s in the portrait, notice the expression and pose of the model, their clothing style, and at the objects and their arrangement within the scene, and yet also notice what wasn’t recorded, thinking outside the frame,” she explains. The formal analysis of choices such as composition, setting, and pose, is added to the study of the historical context, scientific principles, and social ideas of the period. “Working with images is always a multidisciplinary path, encompassing history, anthropology, and, of course, the history of photography, since this medium served as an instrument to record a variety of studies that were considered scientific at the time, for recording the colonial world, and the exhibitions of people, and for producing photo-souvenirs,” says Koutsoukos.

The starting point for her book was a set of photos she found in 2007 at the Chicago Public Library, in the United States, while doing research on the 1893 world’s fair. “That was when I noticed groups of people put on display, in particular the 67 Dahomeans [from present-day Benin] installed in a ‘native’ village and being exhibited as the most ‘primitive’ people at the expo,” she recalls. There was one photo, in the collection at the Library of Congress in Washington, that depicted four Dahomeans carrying a hammock with one of the exhibition organizers sitting in it. “The white man was being carried in the same way that we see in our iconography from the times of slavery, when the enslaved carried the masters. The title given was: Cannibals carrying their master.” 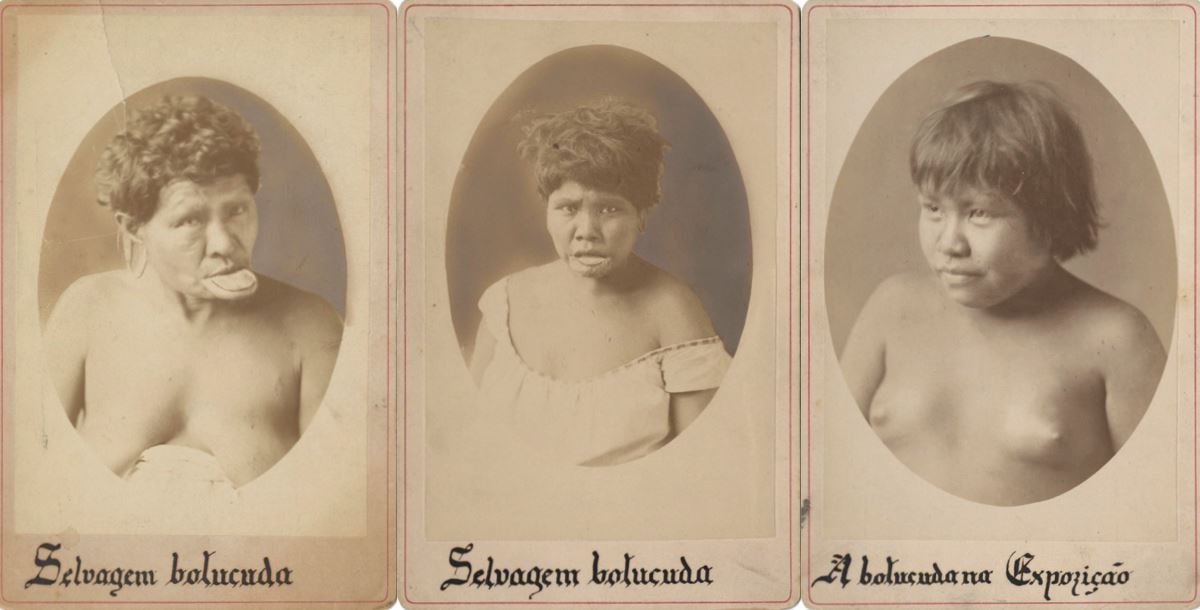 Image of a group of indigenous people who were part of the Brazilian anthropological exhibition, in Rio de Janeiro, in 1882Joaquim Ayres / Berlin Ethnographic Museum

The human zoo and similar practices often examined under the same designation make up a long tradition of “trophying human otherness,” according to Italian historian Guido Abbattista, from the University of Trieste in Italy. European explorers who arrived in the Americas from the end of the fifteenth century onwards habitually took individuals and entire families home with them to be displayed in their native countries.

One of the best-known cases is that of Sarah Baartman (1789–1815). A member of the Khoikhoi ethnic group from South Africa [once referred to as Hottentots], Baartman was seized upon as an object both by the worlds of entertainment and science. Exhibited in London and Paris, she aroused the interest of naturalists in France and was subjected to dissection after her death.

The “human zoo” in its most literal sense, that is, with exhibitions of individuals, families, and larger groups in spaces designed to simulate their original living environments, harks back above all to Carl Hagenbeck (1844–1913), of Germany. A merchant of wild animals to zoos and circuses, Hagenbeck is known as the creator of the “modern” space, where exhibits are displayed in simulated environments rather than cages. In 1874, however, Hagenbeck went one step further by exhibiting groups from Samoa and Lapland (Sámi people), in Hamburg.

Two years later, naturalist Albert Geoffroy Saint-Hilaire (1835-1919) organized “ethnological shows” at the Jardin d’Acclimatation in Paris, displaying “Eskimos,” and Nubians taken from Sudan. Their success with the general public incentivized the promotion of 30 more such events in the city by the year 1912. In Abbattista’s view, this mode of exhibition introduced new aesthetic forms and an aspect of racism typical of the time, however “All the principal elements originate from the beginning of the colonial period: the reification of human beings, their use to satisfy curiosity—but also as evidence for ideological, religious, or secular discourses—and as trophies to be displayed in processions,” he said, in an interview with Pesquisa FAPESP.

Brazil was not immune to the phenomenon. In 1882, the Brazilian Anthropological Exhibition, in Rio de Janeiro, featured an exhibition of a group of indigenous people known at the time as Botocudos. Seven individuals were taken from the Mutum village, in the Rio Doce region, to the then capital of the Empire and placed on display, attracting a large viewing public. They were submitted to anthropometric tests and, according to reports at the time, visibly lost weight. 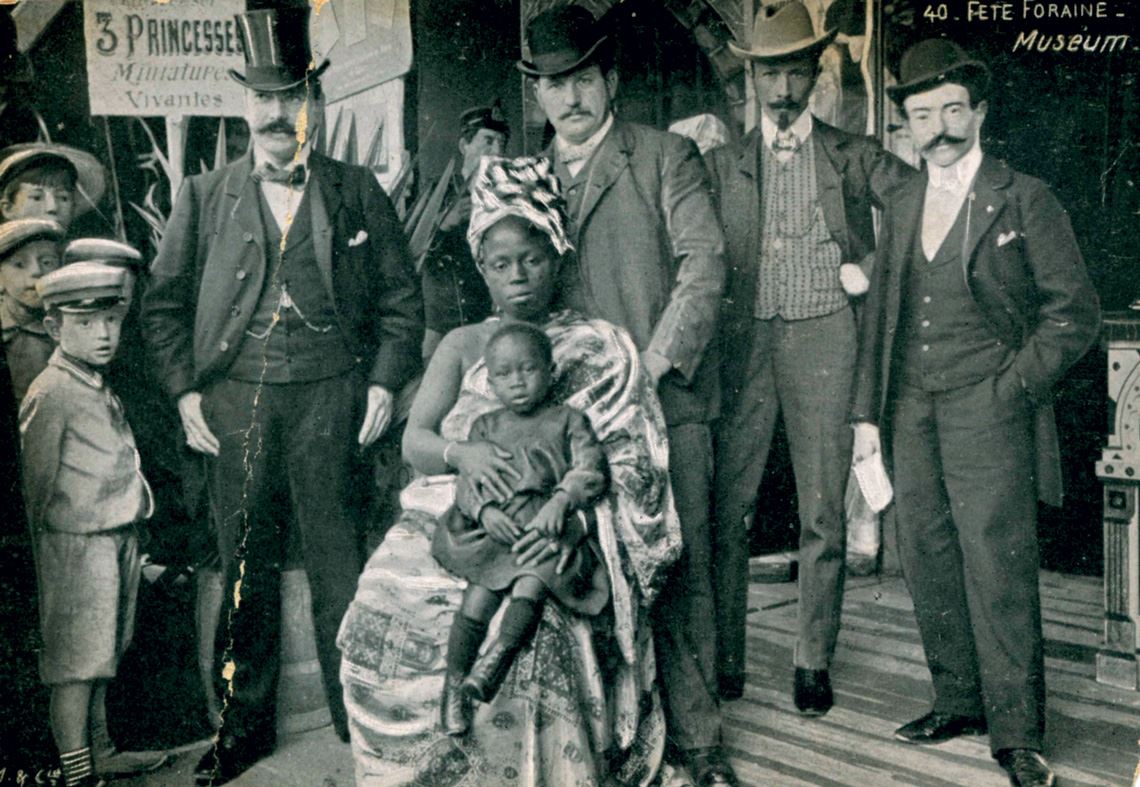 Unlike the exhibitions in Europe, in Brazil such displays were not about representing a colonial empire as it was being built on distant continents. Brazil, independent for a mere 60 years, was exhibiting residents of its own territory. “This is where the contradictions of displaying an internal ‘other’ arise,” says social scientist and anthropologist Marina Cavalcante Vieira, from the State University of Rio de Janeiro (UERJ). In Europe, the spectacles were working with the contrast between the “civilized” and the “primitive.” In Brazil, the Anthropological Exhibition in Rio “seeked to construct the image of a modern country in direct contrast to the Botocudos, who were considered wild, atavistic, and averse to civilization.”

The anthropologist points out that when the same exhibition was presented in London the following year it had a negative impact on public opinion in Brazil, where people were bothered by the fact that the country was being represented by indigenous people. “The image is double-sided. If the exhibition, when held in Rio de Janeiro, creates a mirror in which Brazil begins to see itself in direct contrast to the Botocudos, then the London exhibition presents a second mirror that upsets that self-image: ‘What ever will they think of us abroad?’” Vieira observes.

The justification given for exhibiting human beings as an attraction was, in general, the diffusion of knowledge. European audiences were invited to come and see how these exotic peoples and individuals lived and what they looked like. “Human zoos were set in theaters, circuses, museums, international exhibitions, and zoos, but they were advertised as being more than just a form of entertainment. They also claimed to be sources of knowledge,” she notes.

The anthropologist believes that this blurring of science and spectacle isn’t simply an assessment made with the benefit of hindsight, or an abstraction, but rather, an element the event organizers themselves exploited. In the German exhibition archives there are records of school visits to Hagenbeck’s human exhibitions.

Despite not having similar colonial and racial components, the “freak shows” and pathology exhibits play a similar role. Koutsoukos cites the story of Joseph Merrick (1862–1890), who suffered from neurofibromatosis, and who would later be portrayed in the film Elephant Man (1980), by David Lynch. Merrick was exhibited at freak shows in England, but his presentations were considered to be in excessively bad taste and the police stopped them. Admitted to London Hospital, Merrick was exhibited to doctors and visited by personages from high society, curious about his deformities. “On the way out, just like at the freak shows, the visitor could buy a photo-souvenir,” comments Koutsoukos. 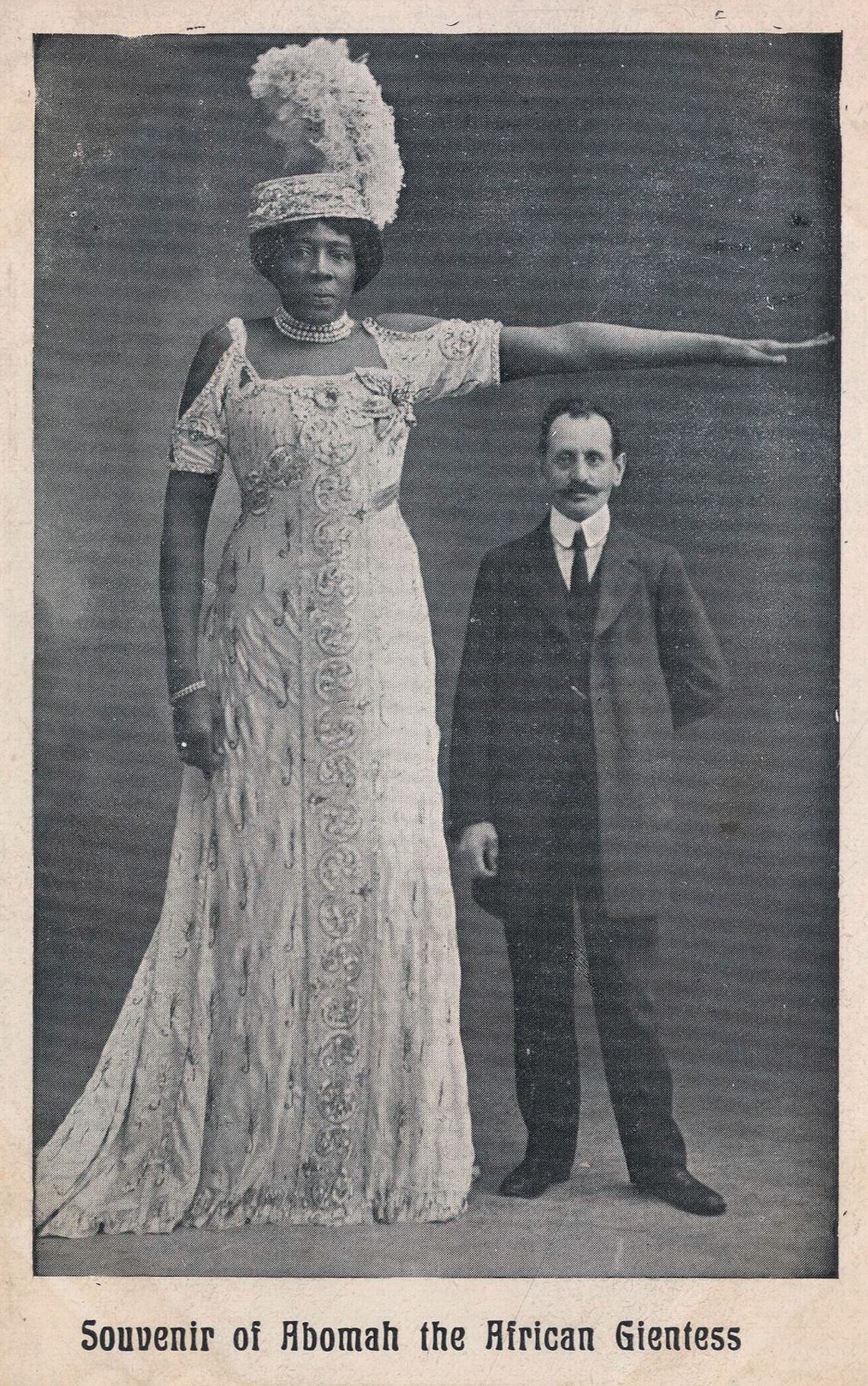 Souvenir of Abomah: the tallest woman in the worldAuthor Unknown / Wikimedia Commons

In her doctoral thesis, “Primitivist Figurations: Transits of the Exotic between Museums, Cinema, and Human Zoos,” defended in 2019 at UERJ, Vieira also approaches human zoos from the perspective of images. The anthropologist demonstrates the existence of strong links between these exhibitions and a nascent art form in the late nineteenth century that was focused on the technology of images: cinema. “Human zoos were unified collections of mass spectacles.  So, what the pioneers of cinema do is point their cameras at subjects that were already attracting the public’s attention,” she observes.

“Since the beginning, there has been a symbiosis with human zoos, which anticipated the narratives, scripts, and scenographies later explored by cinema. Touring exhibitions presented by foreign troupes allowed the public to travel without leaving their homes. The invention of cinema magnified this possibility,” Vieira says, adding that the economic crisis in Germany after the First World War reduced the audience for exhibitions and led impresarios and their troupes to migrate to film production, “incorporating the knowledge from their former metier.”

The phenomenon of human zoos is associated with the period before World War I, during the height of colonialism, in an era that featured huge international exhibitions. However, as late as 1958 one European capital, Brussels, Belgium, was the scene of yet another episode. After protests by Congolese students, the exhibition was quickly dismantled.

Strictly speaking, this was not the last case. In recent decades, a series of incidents that bear some resemblance to the old-style exhibitions have been recorded. In 2005, in Augsburg, Germany, several ethnic groups were presented in an “African village.” In 2007, in Seattle, in the United States, the section of the zoo that re-created an African savannah also presented an artificial village with members of the Massai ethnic group. Similar cases have occurred in Congo and Thailand.

For Koutsoukos, these episodes show that “the story told in Human Zoos is not part of a distant past.” The researcher considers that her investigation is an invitation to reflect on “the relationship between the racism of today and that of the past era.” This reflection is also a fundamental element of the interest that the human sciences have shown in the subject over the last 20 years, Abbattista believes. The main focus has been the debate about the legacy of colonialism. Two important, landmark works come from French authors. In 2004, La Découverte published the book Zoos humains: Au temps des exhibitions humaines [Human zoos: In the era of human exhibitions], edited by a group of historians from various universities across France. In 2011, the exhibition The invention of the savage: Exhibitions was shown at the Quai Branly Museum in Paris.