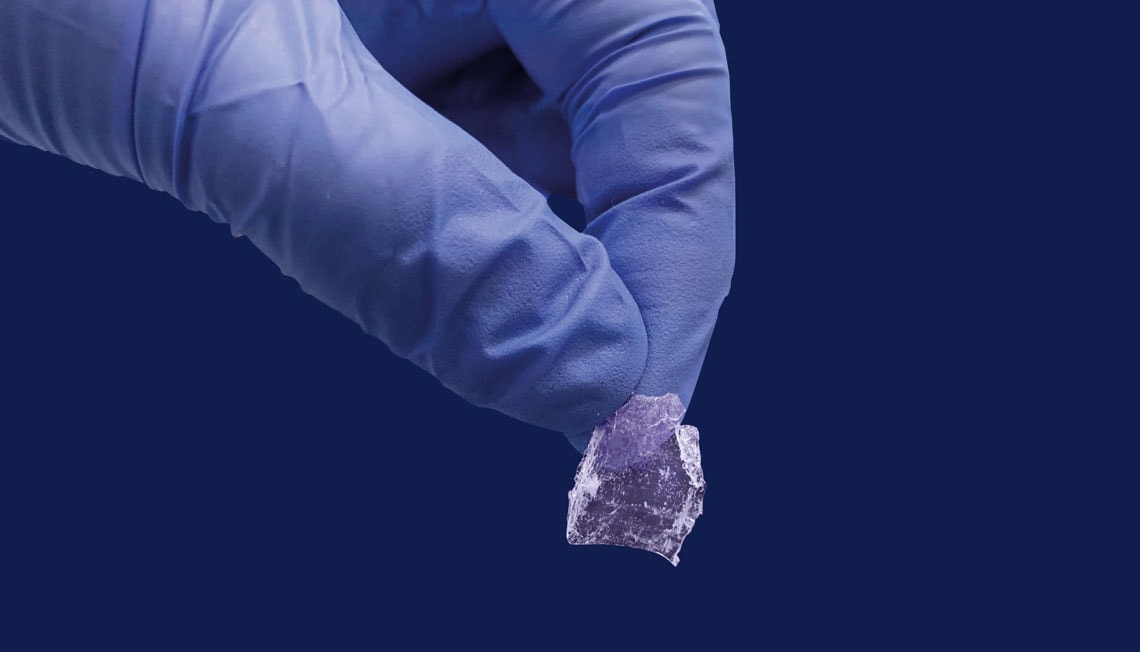 Flexible, thin, and transparent, like the plastic wrapping on a piece of fruit, a new film made of citric acid and germanium, developed by researchers in São Paulo, could be incorporated into the rechargeable lithium-ion batteries used to power cell phones, laptops, and electric cars, improving their performance. The new material could be used to make solid electrolytes to replace the carbon-based polymers currently used inside the batteries, which are responsible for conducting electricity between the positive and negative electrodes (or poles). According to the physicists and engineers who created the new material at the Federal University of ABC (UFABC) in Santo André, Greater São Paulo, and the National Nanotechnology Laboratory in Campinas, germanium-based electrolytes significantly reduce charging time and increase battery life, as well as reducing the risk of explosion and leakage.

The researchers have not yet installed a germanium electrolyte in a rechargeable battery to measure its actual performance, but when comparing its properties with the materials currently used in these devices, they obtained encouraging results. The conductivity of the germanium electrolyte was 10 times greater, suggesting that the lithium ions (electrically charged atoms) move 10 times faster between the poles of the battery. In rechargeable batteries, electric current is generated by lithium ions moving from the negative to the positive pole. During recharging, they move in the opposite direction.

Souza found a first clue about this new material 10 years ago, while studying his PhD at the Federal University of São Carlos (UFSCar) under the guidance of Edson Leite. While preparing metal nanoparticles with silicon to act as chemical catalysts, Souza observed the formation of a transparent material. He replaced one of the metal elements of the catalyst, nickel, with lithium, and realized that the material became conductive. “Chemically, at room temperature, it is a solid material, with a conductive property similar to glass,” he says. Later, under his guidance, energy engineer Victória Castagna Ferrari of UFABC replaced the silicon with germanium and obtained even better results.

Nobel Prize
In 2019, the importance of the lithium battery was recognized by the Nobel Committee, who awarded the prize for chemistry to its inventors—American physicist John Goodenough, from the University of Texas at Austin, USA; English chemist Michael Stanley Whittingham, from Binghamton University, USA; and Japanese chemist Akira Yoshino, from Meijo University, Japan—who have been working on the devices since the 1970s. Used to power cell phones since the 1990s, lithium batteries are still flammable, especially when phones are left in the sun, for example. Research groups around the world are looking for new materials to solve the problem, as well as to increase efficiency. In an article published in the journal Chemical Communications in October 2019, researchers from Johns Hopkins University, USA, described a polymeric material based on acrylic acid derivatives that also takes the form of a transparent film. If the new material improves the electronic and mechanical properties of the batteries, they will need to be charged for less time, reducing the risk of explosion and leakage.

The material created by the Johns Hopkins group has an electrochemical stability window—the voltage range within which the device can function without degrading—of up to 4.1 Volts (V), while the germanium electrolyte’s is up to 5.2 V. Both perform better than current batteries, which can function at up to 3 V. “The larger the window, the more stable the material and the lower the risk of decomposition or explosions,” says chemist Roberto Torresi, from the Institute of Chemistry at the University of São Paulo (IQ-USP), who did not participate in the germanium study. According to him, electrodes up to 5 V are already being developed. “To function without exploding, however, these electrodes need electrolytes with a 5 V stability window,” he adds. American and Chinese research groups have thus incorporated germanium into the electrodes to increase the energy efficiency of batteries. In a study published in Nano Energy in February 2020, a team from Purdue University, USA, described an anode (the negative pole) made of germanium, strontium, and selenium.