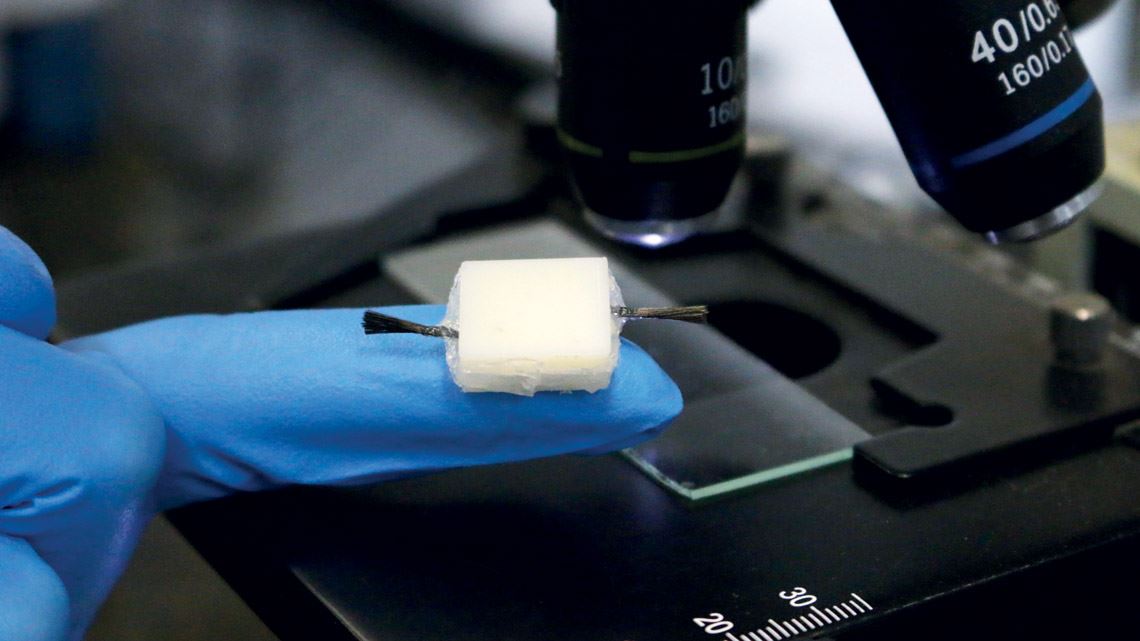 Device could be used in microchips, endoscopy capsules, and smart pills

A team from the São Carlos Institute of Chemistry at the University of São Paulo (IQSC-USP), in partnership with scientists from the School of Engineering and Applied Sciences at Harvard University, USA, have taken a major step forward in the race to create a new generation of sustainable and organic batteries. The group created a microbattery from a vegetable-based gelatin, which could potentially be used in implantable medical devices, such as microchips, or in smart pills and endoscopy capsules for medical exams.

The details of the research were published in the Journal of Materials Chemistry A. “There is no commercial product with the same profile. Our microbattery proved efficient and safer than others currently available on the market, and it is composed of elements found abundantly in nature,” says chemist Graziela Cristina Sedenho, from the USP group.

Sedenho and her PhD supervisor, Frank Nelson Crespilho, won the Kurt Politzer Technology Prize in the Researcher category for their work, awarded by the Brazilian Chemical Industry Association (ABIQUIM). Leader of the Bioelectrochemistry and Interfaces Group at IQSC-USP, Crespilho works on organic and bioinspired energy conversion systems, such as biofuel cells and organic batteries (see Pesquisa FAPESP issue no. 205).

Smaller than the tip of the index finger—it measures 1.5 centimeters (cm) long, 1.5 cm wide, and 4 mm (mm) thick—and weighing only 0.5 grams, the prototype is less toxic than the batteries traditionally used in medicine, which are composed of silver or lithium. Crespilho explains that conventional microbatteries generally contain electrolytes (substances that conduct electricity) that are corrosive or flammable on contact with air or water, which makes them risky for medical use. “There are several microbattery types on the market. They are efficient, but the problem is safety. If a lithium or silver battery breaks and comes into contact with the patient’s body, it can even be fatal,” says the researcher.

In the device developed by the USP and Harvard scientists, the matrix that supports the electrolytes is composed of agarose hydrogel, popularly known as vegetable gelatin (see infographic). A biopolymer made of sugar extracted from seaweed, agarose is cheap and widely available. To generate an electric current, two types of molecules synthesized at Harvard were incorporated into the gel, which enable the microbattery to function with aqueous, noncorrosive electrolytes. 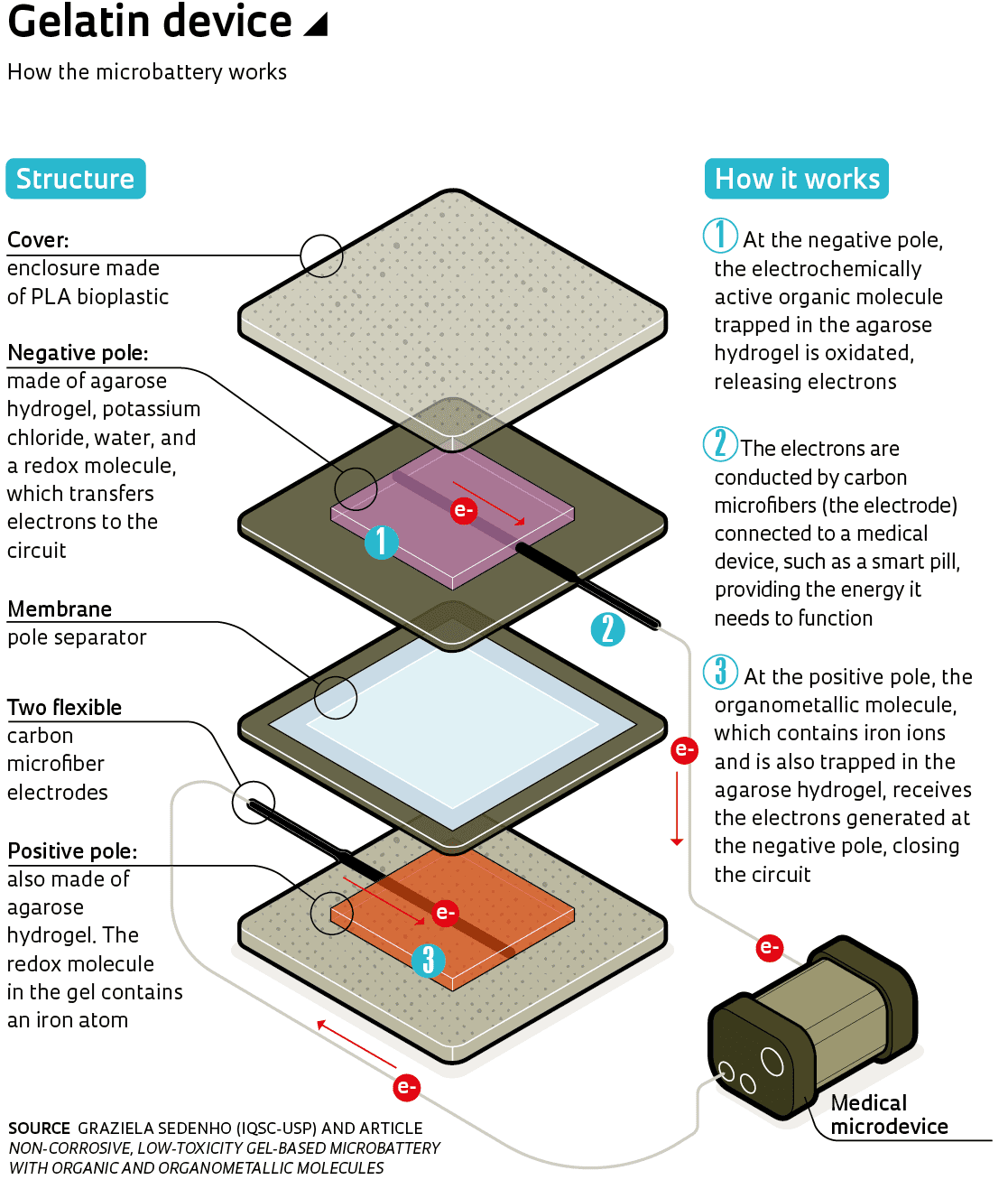 One of these molecules was inspired by quinones, a group of organic substances found in plant roots, leaves, and branches. Michael J. Aziz, a scientist from the Harvard School of Engineering and Applied Sciences who participated in the research, was already working on these molecules for the development of large-scale stationary batteries, designed for wind and solar energy converters.

It was Crespilho’s team that came up with the idea of using organic and organometallic molecules in the microbatteries, with agarose hydrogel as a matrix. The USP group has experience building bioelectrochemical systems for electrical energy conversion using organic and biological molecules, which operate in conditions compatible with the human body.

The battery is classed as a green product because it can be disposed of without causing damage to the environment. Furthermore, its raw material is renewable, unlike lithium, a commodity with finite reserves whose price varies on the international market.

The batteries were developed for use in microdevices that are currently relatively unknown and rarely used in Brazil. “Although endoscopy capsules, used to record images of the digestive system, are commercially available, they are still not widespread in the country,” says Crespilho. Smart pills—a more recent innovation—are equipped with sensors capable of detecting bacteria, blood, and other problems in the gastrointestinal system.

Physicist and chemist Susana Inés Córdoba de Torresi, head of the Electroactive Materials Laboratory at USP’s Chemistry Institute in São Paulo, believes the idea of building a microbattery from agarose gel is original and promising. “The idea is excellent. We need to see how it will work in practice, when clinical trials are carried out,” she says. The microbattery has not yet been tested in any medical devices for human or animal use. According to Torresi, the only concerns are related to stability—not physically, but relating to the functioning of the device—and its biocompatibility.

She points out that microbatteries used in medicine generally do not require a high voltage, since the microdevices in which they are used do not need much energy. She also notes that they are more easily used in devices such as endoscopy capsules, which are used only once and for a short period of time, than in microchips, which are implanted and remain in the body long-term.

The USP researchers believe the microbattery could be used in the near future for a wide range of devices, such as pacemakers, which regulate the heartbeat of patients with heart problems. “For this, we need to improve the technology, since pacemakers require more energy and a longer battery life,” says Sedenho. She emphasizes, however, that the technology is already fit for the purposes currently being studied. “We are ready to provide this knowledge to a company that can produce the device for use among the public.”