In Pyrophorus click beetles, a pair of green lanterns are visible when on the ground, and an orange ventral lantern only during flight

The flashing green lights of fireflies at night are a wonder to behold. But the chemistry that gives them their bioluminescence is yet more fascinating: reactions under varying conditions of pH, temperature, and in the presence of heavy metals can make the color of the light they emit change from green to red. The mechanism by which the change is effected—a decade-old enigma—has been better elucidated in an article published this month in Scientific Reports by a group led by Vadim Viviani, a biochemist from the Sorocaba campus of the Federal University of São Carlos (UFSCAR) and current president of the International Society for Bioluminescence and Chemiluminescence. A firefly enthusiast since childhood, he has a collection of more than 200 species that he started compiling at age 14. For the past two decades he has dedicated himself to investigating the biochemical and molecular aspects of bioluminescence—including in non-bioluminescent insects.

Viviani’s group examined interactions between the molecules responsible for producing light and showed that in fireflies—beetles of the family Lampyridae—conformation of the luciferase enzyme’s active site is responsible for binding luciferin. “During the oxidation reaction that generates light, the positively charged parts of the two molecules are forced against each other, like two magnets with the same poles facing each other,” Viviani analogizes (see infographic on page 60). “The repulsive force that is generated as the two approach each other generates high-energy light in the green region of the spectrum.” However, the positive ions present in more acidic pH or heavy metals, such as zinc, are able to break apart the electrostatic interactions that function as gates keeping the cavity closed. This causes the active site to open, allowing water to enter and attenuate the repulsion among positive charges. At the same time, the luciferin becomes looser within the enzyme and interacts less intensely with the walls of the luciferase cavity. This results in an orange or red glow that is only seen in dying fireflies.

The presence or absence of water (polarity), the presence of basic chemical groups, and the ionic form of the molecules involved—with the electrostatic interactions between them—have previously been posited as potential explanations for observed changes in the behavior of luciferin and luciferase. Current findings indicate, however, that rather than being mutually exclusive, these factors all operate together. 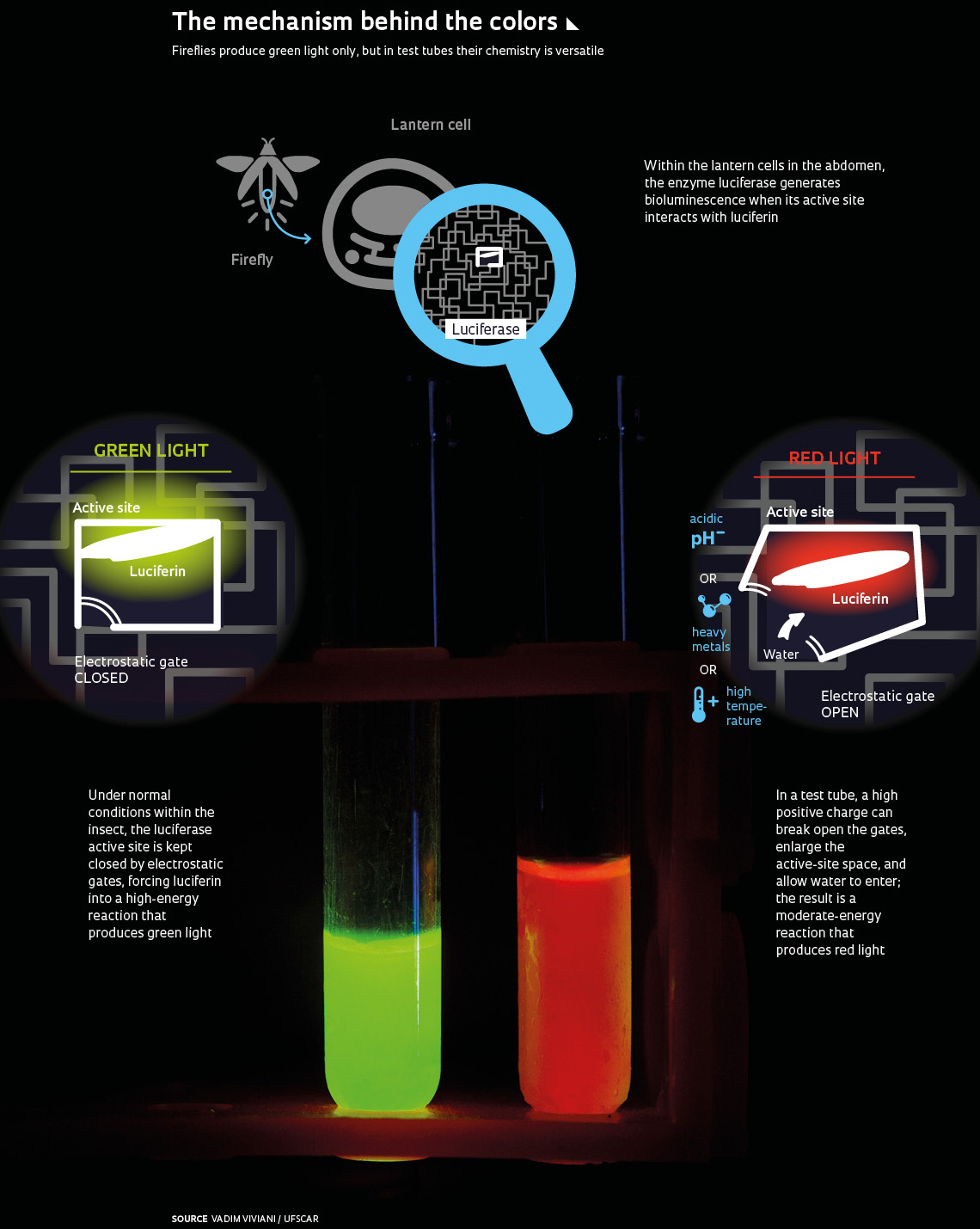 Colored light
Since pursuing his doctorate at the University of São Paulo Institute of Chemistry (IQ-USP) under chemist Etelvino Bechara, who pioneered bioluminescence research in Brazil, Viviani has documented and investigated the colors produced by railroad worms, of the family Phengodidae, and click beetles, in the family Elateridae, which produce a ‘click’ as a form of defense. These insects, which are unique to the tropics in the Americas, exhibit the widest luminous diversity among all bioluminescent insects, with some species glowing blue, others green, yellow, orange, or red. When luciferin and luciferase react outside these insects’ cells in test tubes, each pair of molecules is only capable of producing a single color, with no variation as in fireflies. This diversity of light patterns allows males and females to recognize each other when mating. “Fireflies go on mating flights with a defined pattern for each species; there are no blind dates when it comes to fireflies,” says Bechara.

By investigating the effect of mutations altering the molecular structure of luciferases, and using models to reconstruct the three-dimensional shape of these molecules, the group in Sorocaba has shown that the structure of elaterid and phengodid luciferases appears to be more rigid. The different configurations, some with narrower and others with broader active sites, are now believed to be part of what determines the color of light emitted by organisms that produce these molecules, as has been shown by doctoral student Vanessa Bevilaqua. Biologist Danilo Amaral, a postdoctoral fellow at Viviani’s laboratory, is deepening research on gene activity—the transcriptome in bioluminescent elaterid species—to understand the difference between cells in luminescent and non-luminescent areas. He has also investigated the ancestral relationships among species to explain the evolution of the system. “Beetle luciferases share a common origin, but their lanterns are not homologous,” says Amaral.

In an elaterid beetle found in Mato Grosso, Pyrophorus angustus, the group discovered a curious versatility in the colors it emits. Like all bioluminescent members of this family, these insects have what resemble a pair of headlights behind their head, in the prothorax, which produce a greenish glow. This gives them a rather spooky appearance, like two glowing eyes, when they are on the ground. But when they are airborne, they arch their bodies and expose their abdominal lantern, which is tucked in a fold. In this stance they emit an orange glow, as the researchers describe in a 2016 paper in the journal Photochemical and Photobiological Sciences. They are unique not only in that the same insect can emit different-colored light, but also because across Central America insects within the same species produce varying shades of green from either light organ. “This may be the way they adapted to the orange twilight glow within the Amazon forest,” suggests Amaral. Before P. angustus was discovered in the Amazon, another species of the same genus, P. plagiophthalamus, from Jamaica, was the only firefly known to bioluminesce different light colors: green to yellow from the prothorax lanterns and green to orange from the abdomen.

This is one of the findings that led to a decision, nearly 10 years ago, to expand the researchers’ fieldwork northward. “We had done fairly extensive research within the Atlantic Forest, but the Amazon remained a mystery from a bioluminescence perspective,” says Viviani, who when interviewed by Pesquisa FAPESP was preparing a two-week field trip to Mato Grosso and Rondônia, along a route covering some 3,000 kilometers. Another Amazonian example described in 2016 in the Annals of the Entomological Society of America, elaterid larvae of the genus Pyrearinus live in paleo-burrows dug by giant armadillos in Carajás, Pará. The larvae burrow tunnels in the clay walls of these caves in similar fashion to the better-known light-spangled termite mounds in the Cerrado (wooded savanna). By emitting light in the region near their heads, these larvae attract small insects to prey on for food.

Within caves in an Atlantic Forest reserve in southern São Paulo State, Viviani’s group found mosquito larvae of the genus Neoditomyia which, while not bioluminescent, are similar to the blue-glowing larvae of the genus Orfelia in the US, leading the researchers to conduct a study they reported on this year in Photochemical and Photobiological Sciences. The larvae found in São Paulo have luciferin and an associated storage protein. “The presence of the two molecules indicates that luciferin must play an important biochemical role, although we still don’t know what it is,” says Viviani. Since they do not have luciferase, they are non-bioluminescent. This novel biochemical system, which appears to be evolutionarily recent and involve different molecules, provides an opportunity for Viviani to unlock the mysteries of yet another mechanism as he has done with other insects. “These are new solutions, possibly with new applications.”

From insects to biotechnology
The sensitivity of luciferase creates exciting possibilities in environmental sensing applications. After isolating the enzyme in fireflies and the genes responsible for producing it, the researchers insert these genetic instructions into bacteria, which then produce the molecule of interest, in a process known as cloning. This allows them not only to manufacture the light-producing substance, but also to modulate its conformation and properties through genetic engineering. Cultured in small wells in cell culture plates, these bacteria can be used as luminescent sensors for heavy metals that change color depending on the substance they come in contact with, as reported by Gabriele Gabriel in a 2016 article in Analytical and Bioanalytical Chemistry as part of her doctorate in biotechnology, which she completed in 2017.

Depending on pH and the presence of heavy metals, the color of the light produced by chemical reactions can go from green to red

“We are now trying, with some success, to change the size of the active-site cavity and its electrostatic properties,” says Viviani. These adjustments have allowed the researchers to enhance luciferase sensitivity to toxic heavy metals such as lead, cadmium, and mercury. “We still don’t know if it will have a real-world application, but it likely will,” says the researcher, who has already submitted a patent application for the method. The new technique could be used to detect changes in pH and metal levels within cells. This would support applications such as testing pharmaceutical and cosmetic products for toxicity in cell cultures, monitoring the progression of infections or the proliferation of metastatic cells, and evaluating novel drugs with minimal animal testing. Viviani plans to launch a startup to develop luminescent systems for a range of applications.

From the field to the laboratory, Viviani’s work covers everything from ecology and evolution to genetics and, above all, biochemistry. “Vadim is at the forefront of bioluminescence research,” says Etelvino Bechara. “He can manipulate DNA to produce yellow, orange, or red light, which is important for analytical applications.” Much has changed since he first started doing bioluminescence research in the 1970s. “There was no molecular biology then, and it was more about natural history than chemistry,” recalls Bechara, who is currently working on mushroom bioluminescence research alongside chemist Cassius Stevani of IQ-USP.

Viviani believes outreach is part of any scientist’s mission. Last year he set up a small museum of bioluminescence at a university outreach center, which receives students from local schools. “The knowledge we produce in the laboratory is put on display there.”