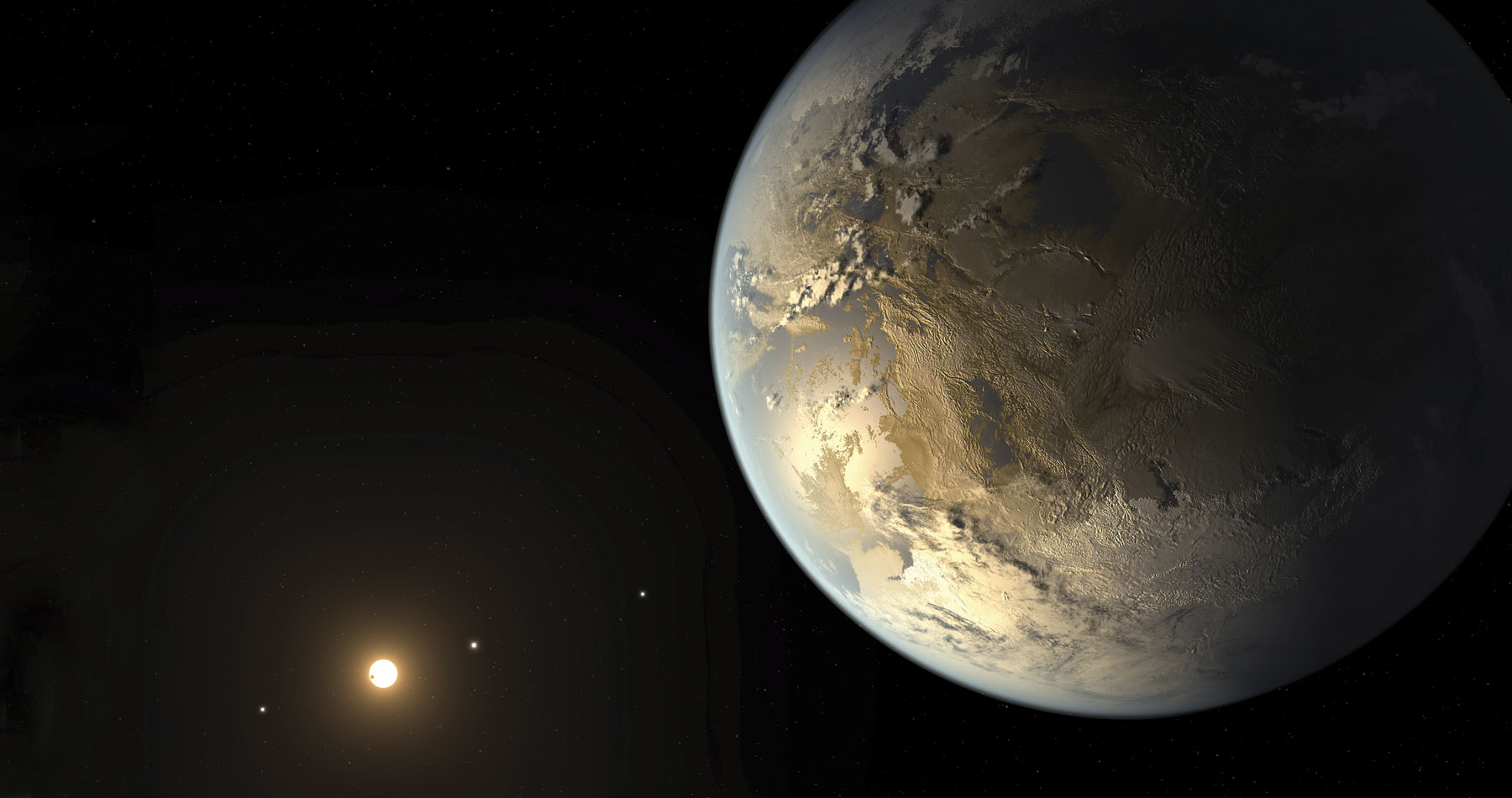 Artist’s conception of the exoplanet Kepler-186f, the first to be discovered of a size similar to Earth

The illustration on these pages shows how one artist imagined the exoplanet Kepler-186f in April 2014. At that time, astronomers confirmed that the mass and size of this planet 500 light years from the solar system was similar to that of Earth. Observations made by the Kepler space telescope also suggested that the distance between this planet and its star, the red dwarf Kepler-186, would allow liquid water to exist. For this reason, researchers announced that Kepler-186f was the first rocky exoplanet discovered in the habitable zone of its star. Inspired by this discovery, the artwork shows the surface on Kepler-186f resembling that of Earth, with continents and oceans, creating a landscape conducive to the development of life forms similar to those of our planet.

However, new observations of its star suggest that the surface of Kepler-186f may be very different to and much less favorable for the existence of life, at least, to life as we know it. Working with an international team of researchers, the astronomer Kátia Cunha from the National Observatory in Rio de Janeiro and her doctoral student Diogo Souto conducted the first detailed analysis of the chemical composition of the star Kepler-186. Their study was published in February of this year in the Astrophysical Journal and presents the chemical analysis of another red dwarf, Kepler-138, which is orbited by the smallest rocky exoplanet discovered so far, with a body the size of Mars. This was the first time that astronomers were able to measure the chemical abundances of red dwarf stars with accuracies resembling those possible when observing stars similar to the Sun.

The analysis of the light emitted by a star, which is known as the star’s spectrum, provides a general understanding of the abundances of the chemical elements that comprise it. However, Souto explains that the temperatures in the atmospheres of red dwarf stars are low enough to allow the formation of water, titanium oxide and vanadium oxide molecules. When these stars are observed in the visible light range, titanium oxide masks the presence of several chemical elements. Even so, Souto showed that, by using infrared, it is possible to identify and measure the abundances of 13 chemical elements in red dwarf stars.

Souto and Cunha used data obtained from APOGEE, a high-precision spectrograph installed on a telescope in New Mexico, to estimate the concentrations of different chemical elements in the two stars and concluded that Kepler-186f contains more silicon than the Sun. This excess silicon would cause the planets around the red dwarf to be made of rocks so hard that they would prevent the formation of tectonic plates in their crusts.

Without tectonic plates, there would be no processes to recycle gases, liquids and rocks, which, on Earth, over billions of years, have determined the chemical compositions of the atmosphere, the continents and the oceans. Without oceans or continents constantly altered by the movement of tectonic plates, Kepler-186f would have a relatively unchanging and possibly desert surface.

The other red dwarf, Kepler-138, showed silicon levels similar to those of the Sun, so its small rocky exoplanet would have a composition that could favor the formation of tectonic plates. Even so, it is too close to the star to have liquid water on its surface.

Artist’s conception of the exoplanet Kepler-186f, the first to be discovered of a size similar to EarthImage Danielle Futselaar / Seti Institute | Illustration Robin Dienel / Carnegie Dtm

“Studies like this are of great importance for the astronomy of exoplanets,” says Souto. “A future NASA mission, TESS, will look especially at low-mass stars, which are the most abundant in the galaxy, and allow detailed study of their chemical composition, which is important for understanding the properties of their exoplanets.”

Iron, oxygen, and oceans
The conclusions made by Souto, Cunha and their collaborators about the surface of Kepler-186f result from the application of a mathematical model developed in 2016 by the American geophysicists Cayman Unterborn of Arizona State University and Wendy Panero of Ohio State University. The model uses astronomical observations of the chemical composition of a star to estimate the mineral compositions of rocky planets formed around it. “The composition of the star serves as a reference for the possible compositions of its planets,” says Unterborn.

Unterborn and Panero based their model on what astronomers and geophysicists know about the composition of the Sun and the formation of the solar system. The planets formed from a disk of gases and dust made of the same primordial material that produced the Sun. A series of collisions that occurred over hundreds of millions of years between the materials in this disk caused the specks of dust to stick together, forming increasingly larger bodies until they formed the rocky planets. It is this process of planetary formation that the American geophysicists’ model simulates in a simplified manner to calculate the mineral compositions of exoplanets from the chemical makeups of their stars.

If part of the crust is denser than the material in the mantle, the planet can develop a dynamic of tectonic plates

One of the model’s main conclusions is that the abundance of the element oxygen in this protoplanetary disk can restrict the sizes of the cores of these planets. A rocky planet like Earth has an iron core, which is surrounded by a thick mantle; this, in turn, is covered by a thin crust that forms the planet’s surface. “In the mantle, oxygen reacts with the iron and creates oxides that are too light to sink to the center of the planet,” explains Unterborn. “Instead, these oxides remain in the mantle and affect the compositions of minerals.” The quantity of oxygen also controls the presence of water in the mantle and the chance that the planet will have oceans.

While the core is made almost entirely of iron, the mantle and the crust are composed of minerals containing a variety of elements but are mostly silicon. “In estimating the chemical composition of the silicon-rich portion of the planet outside the core, we can model the process that heats up the rocks in the mantle and forms the crust,” adds Unterborn. “If part of the crust is composed of a material that is denser than the mantle beneath it, the planet can develop a dynamic of tectonic plates.”

To test this model against astronomical observations, Unterborn and Panero have been working since the middle of last year with Johanna Teske of the Carnegie Institute and other astronomers using the APOGEE spectrograph mounted on the Sloan Foundation telescope at the Apache Point Observatory in New Mexico. APOGEE has already analyzed the spectral lines in the infrared frequency range of approximately 200,000 stars in the Milky Way. The main objective is to use the chemical compositions of these stars to understand the history of the galaxy’s formation (see Pesquisa FAPESP, issue No. 232).

Some of the stars APOGEE has observed were also the target of the Kepler space telescope, which was designed to look for signs of exoplanets in variations of the brightnesses of their stars, and are now being investigated by Teske and her colleagues. They are applying Unterborn and Panero’s model to deduce the properties of the rocky exoplanets identified by the Kepler telescope around these stars.

Silicon and the continents
At the meeting of the American Astronomical Society held in Texas in January of this year, the team presented the first results of its assessment of the chemical compositions of planets orbiting two stars similar to our Sun, which is a yellow dwarf. The researchers used the differences between the chemical compositions of Kepler-102 and Kepler-407 to demonstrate how the abundance of silicon in a star is a strong indicator of the most common minerals found in its orbiting rocky planets.

In the case of Kepler-102, which has a silicon concentration similar to that of the Sun, the researchers predict that its rocky exoplanets have mantles and crusts which are rich in olivines, a group of minerals which are also abundant in the Earth’s crust and mantle. Meanwhile, Kepler-407 has silicon concentrations far exceeding those of our Sun; its planet Kepler-407b has dimensions similar to Earth and is expected to have a crust rich in diopside and a mantle with an abundance of garnets, minerals that are tougher and denser than olivines, which are the most abundant on Earth. This combination, according to Unterborn, would prevent the formation of tectonic plates.

Because of these denser minerals, Kepler-407b may have a greater mass than Earth, although its radius would be similar. Future observations of the planet made with a new generation of more powerful telescopes could confirm or disprove this prediction. “For now, the uncertainties in the measurements are still significant,” says Unterborn.

As the work by Souto, Cunha, and their colleagues has shown, the model by Unterborn and Panero can also be used to estimate the compositions of exoplanets orbiting other types of stars, not just yellow dwarfs like the Sun. Most important of all are the red dwarfs, which represent 70% of the stars in the Milky Way; yellow dwarfs make up 7% to 8% of the stars in the galaxy. Because they are small, less than half the size of our Sun, red dwarfs facilitate the detection of exoplanets passing in front of them. Since these stars are smaller, when their planets cross in front of the stars, the planets cause greater and more easily detectable reductions in the light that arrives at Earth.

This year, astronomers working with the NASA Spitzer and Hubble space
telescopes and the TRAPPIST terrestrial telescope at the European Southern Observatory found a record seven planets around a red dwarf, Trappist-1. These planets have similar sizes and masses as Earth, and three are in the star’s habitable zone. “Trappist-1 is in the southern hemisphere, and we will only be able to observe it when APOGEE-2 is installed in the Las Campanas Observatory in Chile,” says Souto. “We put in a request to observe it before November and hope to have some results about its chemical composition by the end of the year.”