CiaCamp, an abbreviation of the Portuguese words Ciência ao Campo, meaning “from Science to Agriculture,” is the name aptly given to a startup created to market a new product against citrus disease. “Our mission is to bring knowledge produced by scientific research to farmers,” says the company’s founder, biologist Simone Cristina Picchi. The researcher is working to improve product formulations with an antioxidant molecule called N-acetylcysteine ​​(NAC) as the active ingredient. NAC is an analog of the amino acid cysteine that is used in humans as a mucolytic (mucus-breaking) agent, but has also been proven effective in controlling the three most prevalent bacterial citrus diseases in Brazil: citrus variegated chlorosis (CVC), known in Brazil as “citrus yellowing,” citrus canker, and citrus greening or Huanglongbing (HLB). The product is set to be launched early in the year.

Developed at laboratories at the Campinas Institute of Agriculture’s (IAC) Sylvio Moreira Citrus Center, in Cordeirópolis, São Paulo State, NAC was tested in 2014 against CVC in citrus groves owned by Citrosuco, a globally leading producer of orange juice concentrate, in Matão (SP). The results were encouraging. “The first experiments were done at advanced stages of the disease. After two harvests we found that diseased plants had partially recovered,” says Picchi.

Crop productivity improved, with both the number and diameter of fruits increasing—including on healthy citrus trees. The reason, Picchi explains, is that NAC not only prevents the proliferation of bacteria, but also helps to reduce oxidative stress, improving plant resistance to disease and environmental stressors such as heat, ultraviolet radiation, and too much or too little water and nutrients.

Experiments have also been done on citrus canker. In a screen house, the use of the product alone or in combination with copper (the substance conventionally used against citrus canker) reduced disease incidence by 30% and disease severity by 23%, while the application of copper alone reduced incidence and severity by 20% and 15%, respectively. In curative field tests (performed when the plant already has disease symptoms), NAC reduced citrus canker in orange groves by 10% more than with copper.

The company has created two different formulations of the product—NACsolution, for spraying on leaves, and NACagri, for application on the soil as fertilizer. Because both products are still in late-stage development, the startup has partnered with fertilizer manufacturer Amazon Agro-Sciences, in São Carlos (SP), to accelerate product launch. Amazon will market a liquid fertilizer containing the NAC molecule, called Gran Black, under CiaCamp’s supervision. 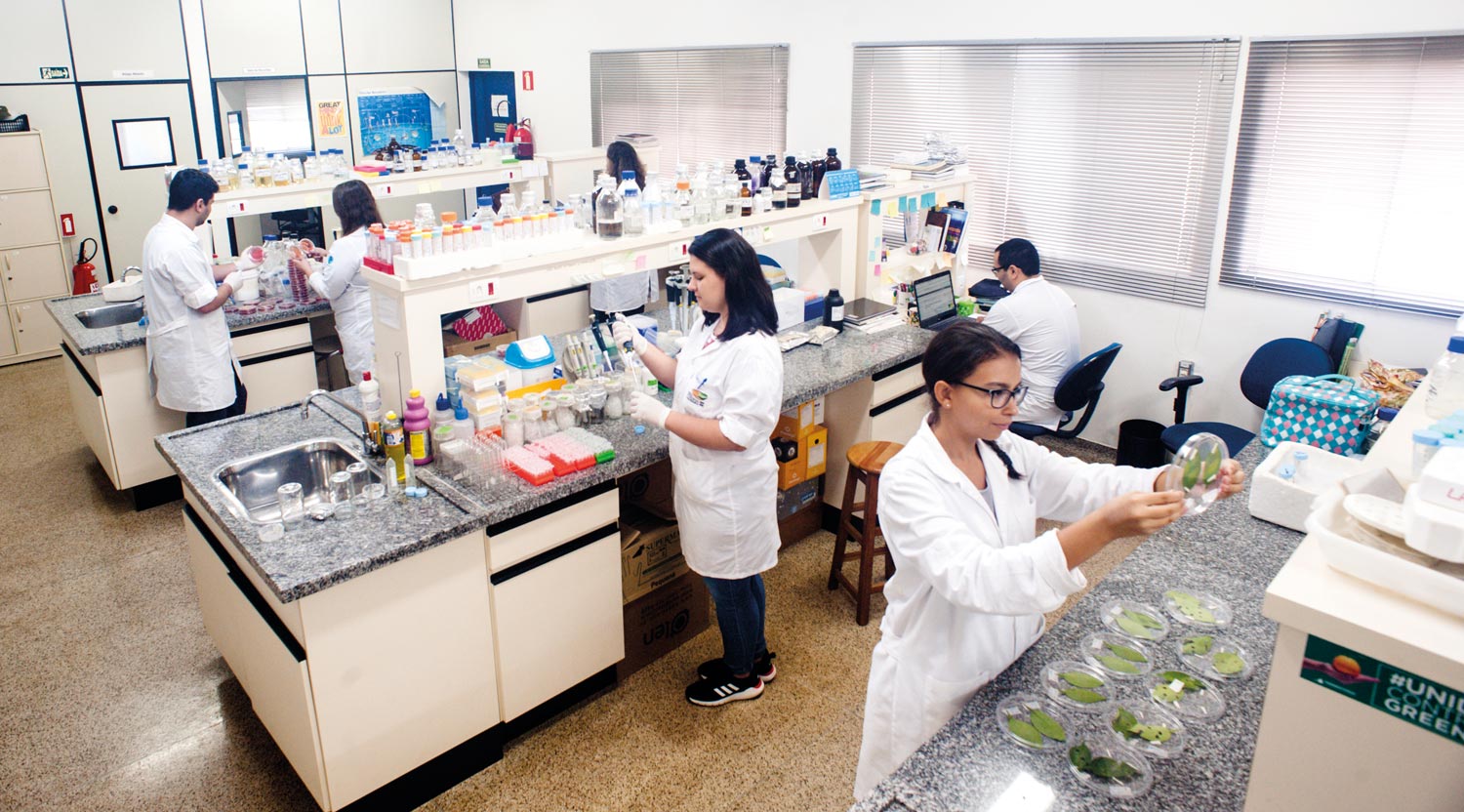 Drawing on genome project data
The discovery that the antioxidant molecule N-acetylcysteine ​​could fight plant pathogens resulted from a combination of inspiration and years of research effort, with FAPESP support. It all started in 2007 when biologist Alessandra Alves de Souza, a researcher at IAC, was treating her child’s cough with an acetylcysteine-based expectorant. It occurred to her to test whether the substance, which is used to loosen mucus in airways, could also be used to break up bacterial biofilms on citrus trees. Biofilm bacteria cling together and behave as a single organism. On plants infected with CVC, these bacterial biofilms adhere to the xylem—a vascular tissue that transports water and nutrients from a plant’s roots to its crown—clogging its vessels.

“I was reading the package insert and learned that the expectorant worked by breaking up bacterial aggregates just like the ones formed on citrus trees infected with Xylella fastidiosa,” de Souza recalls. She was then investigating the biological characteristics of Xylella and the resistance of biofilms to antimicrobial compounds. Prior to this project, she had previously studied the pathogenicity of this bacterium and the formation of biofilms during her doctoral research, which she completed in 2004.

Because treating plant disease with acetylcysteine ​​had never been done before, de Souza decided her research effort would initially be modest. She invited Lígia Segatto Muranaka, a biological sciences student at São Paulo State University (UNESP), to join her in a scientific initiation program. The first laboratory tests, in which the molecule was applied directly on the bacterium, showed promising results. The substance was then tested on plants at the laboratory’s greenhouse during Muranaka’s master’s program between 2008 and 2010.

Their early studies drew on robust data from the X. fastidiosa genome project that FAPESP had launched in the late 1990s. “Sequencing the Xylella bacterium allowed us to identify its genes and potential targets that could be used to control the pathogen,” says de Souza. “This led us to possible targets by which NAC could act on Xylella.”

The journey from research to commercial product began in 2010. That year, Simone Picchi started a postdoctoral fellowship at the IAC’s Citrus Center under de Souza to test NAC on citrus canker. Given the good results, de Souza encouraged her to start a business and apply for funding via FAPESP’s Technological Innovation in Small Businesses (PIPE) program.

“It can be difficult in Brazil to get large companies to market a product developed in academia, so setting up a startup seemed to be the best option,” recalls de Souza. The PIPE project was approved in 2015, and CiaCamp secured an exclusive license to the NAC patent—which was owned by IAC, de Souza, and other members of her team—for use in agriculture. The patent application had been filed at the National Institute of Industrial Property (INPI) in 2011, and the patent was issued in 2018.

CiaCamp used the IAC’s laboratories to develop the project. “The institute is not an incubator per se, but we were for all practical purposes the first startup to be incubated there. The collaboration between the IAC researchers and CiaCamp was very fruitful,” says Picchi. “We would discuss new tests and their results, and ways to improve application methods and reduce costs,” says de Souza, who will receive royalties from product sales as one of the inventors named in the patent.

These discussions led to new research ideas, such as using the product on other plants subject to Xylella infection, including olive trees. When these trees have early symptoms of the disease, NAC can slow the progression of infection, says de Souza.

Global applications
According to citrus experts, the market is eager for solutions to important crop pests. “There are no products available that can kill plant pathogens when already inside the plant,” says José Belasque Junior, a crop scientist in the Luiz de Queiroz College of Agriculture (ESALQ) at the University of São Paulo (USP). Growers use preventive crop management techniques against infection.

To prevent greening, a disease caused by Candidatus Liberibacter americanus and Candidatus Liberibacter asiaticus, farmers apply insecticides to reduce populations of the psyllid Diaphorina citri, the insect vector of these bacteria. A similar approach is used for CVC, which is transmitted by 11 species of leafhopper. Against citrus canker, a disease caused by the bacterium Xanthomonas citri subsp. citri, farmers use a copper-based pesticide. “This is also a preventive measure. The copper remains on the leaves and the bacterium dies on contact with the substance,” says Belasque. Sanitary control of seedlings, pruning affected parts of infected trees, and eliminating diseased plants are other approaches used to control CVC.

Belasque is hoping the product developed by the IAC researchers will prove to be an economical alternative to the use of insecticides and copper, which can cause environmental contamination. He believes if CiaCamp can develop a substance that will not volatilize when exposed to sunlight or be washed off by rainwater, it will have a global market at its feet. “Greening affects citrus groves across the Americas as well as in Asia and South Africa,” he says. “If it is well formulated, CiaCamp’s product has a bright future ahead of it.”

Citrus losses
Greening, citrus canker, and CVC threaten crop yields in an industry worth US$14 billion per year 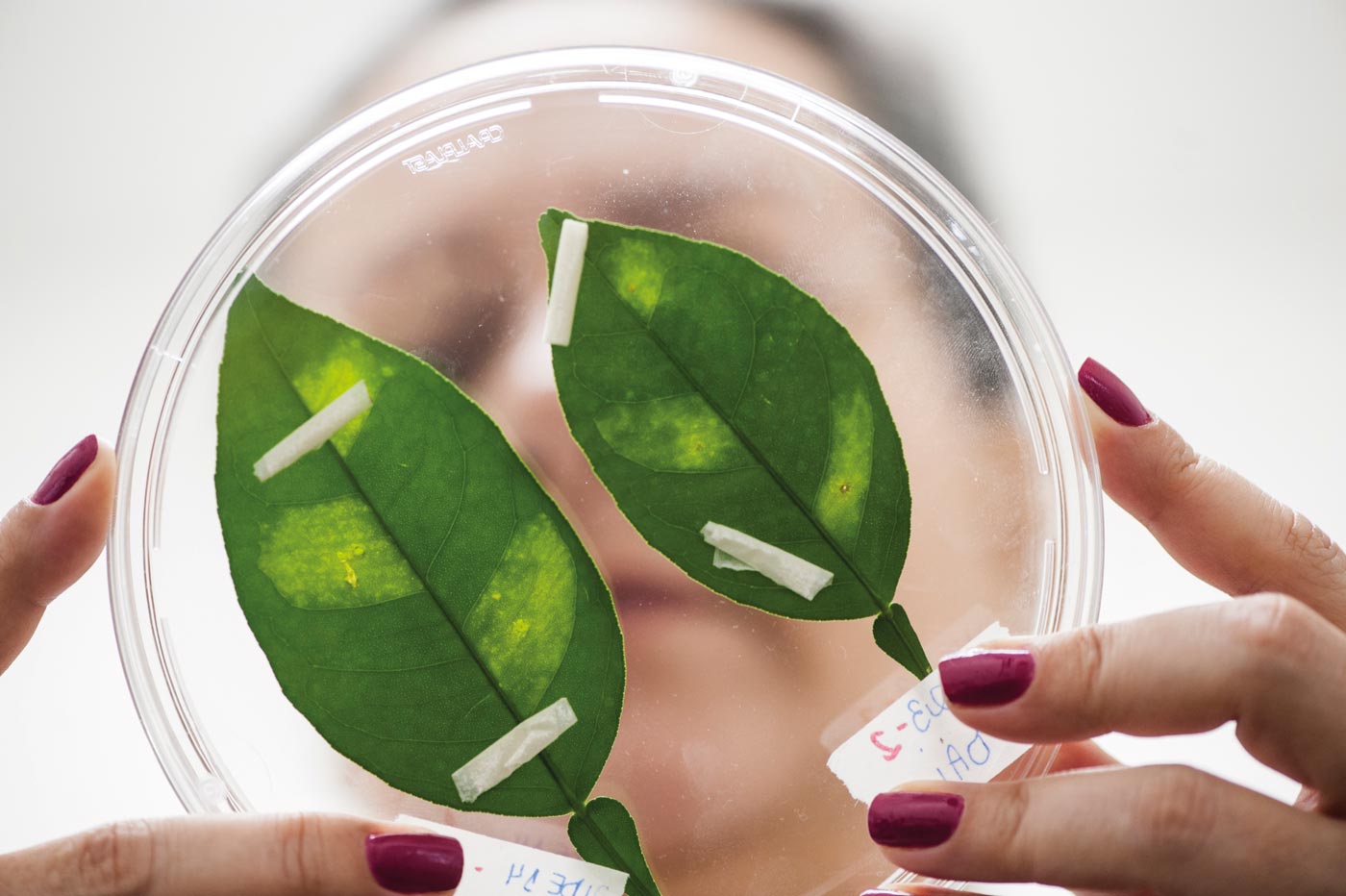 Brazilian orange groves, accounting for 61% of global orange juice production, are affected by three bacterial diseases. The two biggest threats are citrus greening—the world’s most devastating citrus disease, which in Brazil increased by 8.5% between 2017 and 2018 and now affects 18% of citrus groves—and citrus canker, which grew by 35% in the period, infecting almost 12% of citrus trees in the state of São Paulo, the Minas Triangle, and southwestern Minas Gerais. On the positive side, CVC, which in 2009 affected 42% of citrus trees, is now confined to 1.3% of citrus groves thanks to crop management practices such as planting healthy seedlings under protective screens and using insecticides.

According to the Brazilian Fund for Citrus Protection (FUNDECITRUS), an association of citrus growers and juice processors in the state of São Paulo, Brazil’s citrus industry supports 200,000 direct and indirect jobs and is worth US$14 billion per year. The high loss rates in the industry are primarily due to premature fruit drop. Preliminary findings from a FAPESP-supported survey by Franklin Behlau, of FUNDECITRUS, show a 17% drop rate in the 2017–2018 harvest, 60% of which was caused by disease. “That’s a loss of 47.4 million crates. And with a price per crate of around R$20, financial losses amount to R$948 million, or almost 7% of total revenues in the industry,” Behlau says.