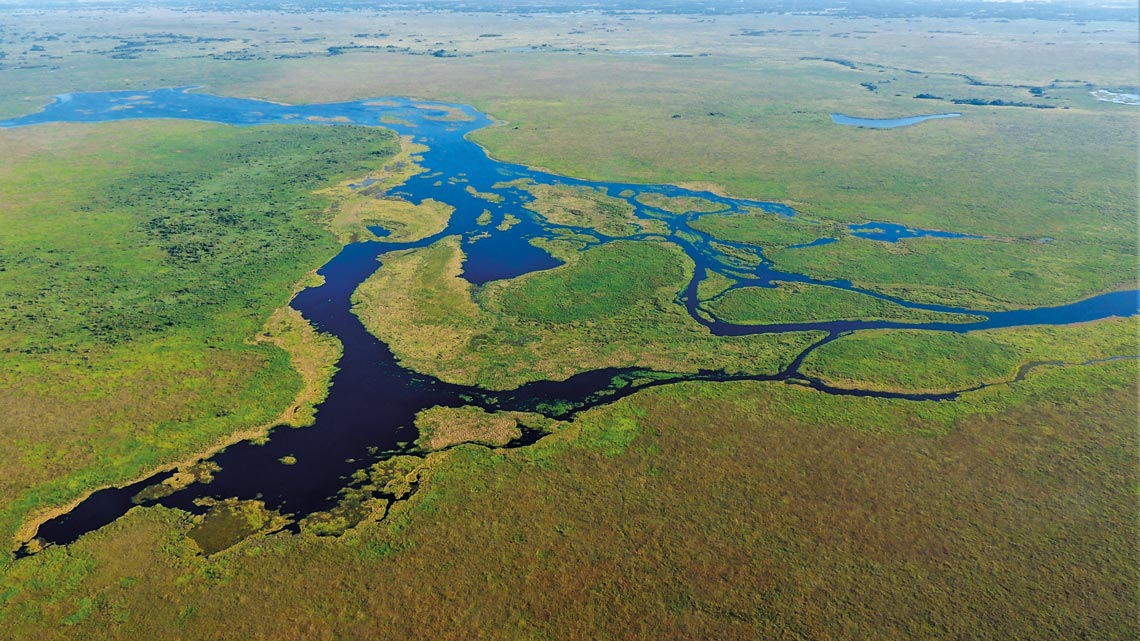 For years, geologists and geographers from Brazil and abroad have studied the landscapes that form the Rio Negro’s plain in the south of the Pantanal, without realizing that it was home to a large lake hidden beneath a huge mat of aquatic flora. In a paper published in the scientific journal Earth Surface Processes and Landforms in October, researchers described the discovery of a lake that is just over two-thirds of the size of the city of São Paulo. “It was almost impossible to identify it at first sight,” says geographer Eder Renato Merino, a postdoctoral fellow at the Institute of Energy and Environment at the University of São Paulo (IEE-USP) and one of the authors of the study. “The accumulation of floating mats and meadows on its surface makes it appear from afar like an area of land covered by grass.”

Merino was one of the researchers who identified the lake, located on the plain of the Rio Negro. The finding was made thanks to satellite image analyses that he conducted during his PhD, which he completed in 2016 under the guidance of geologist Mario Luis Assine, from the Institute of Geosciences and Exact Sciences at São Paulo State University (UNESP), Rio Claro campus. For decades, Assine has been studying the transformations that affect the landscapes of the Pantanal, one of the largest floodplains in the world. In this case, he and Merino were looking at how the plains of the Rio Negro were formed and how water and sediments were captured and distributed in the region during the flood season between October and May.

When analyzing the course of the Rio Negro, from its sources in the plateau to the flat lowlands of the Pantanal, they observed that the water body spread as it advanced over the plain, changing course and creating several winding channels along the way. This is nothing new. The way rivers in the Pantanal change trajectory is well known to researchers. The surprise came when they realized that the channels all seemed to disappear in a certain region of the map, which was apparently composed of solid land. It was as if the channels were suddenly plunging underground, only to resurface at another location. “It was a deserted and completely flat area, with no buildings, roads, or signs of livestock,” says Assine, another of the authors of the article.

To understand the cause of the phenomenon, Assine and Merino looked at a series of digital images of the region taken by the Landsat satellite between 2000 and 2011. “We analyzed the images and then we flew over the site,” says Merino. “We found that the area was actually a lake under a huge blanket of aquatic plants,” he explains. Back in the lab, the researchers analyzed the images in more detail. The objective was to determine the area’s wetness index and how frequently it floods. Using computational models, they found that the almost 1,100-square-kilometer (km2) area was permanently flooded, even in the dry season between May and September. The only conclusion was that it is a large lake, which had never previously been described. 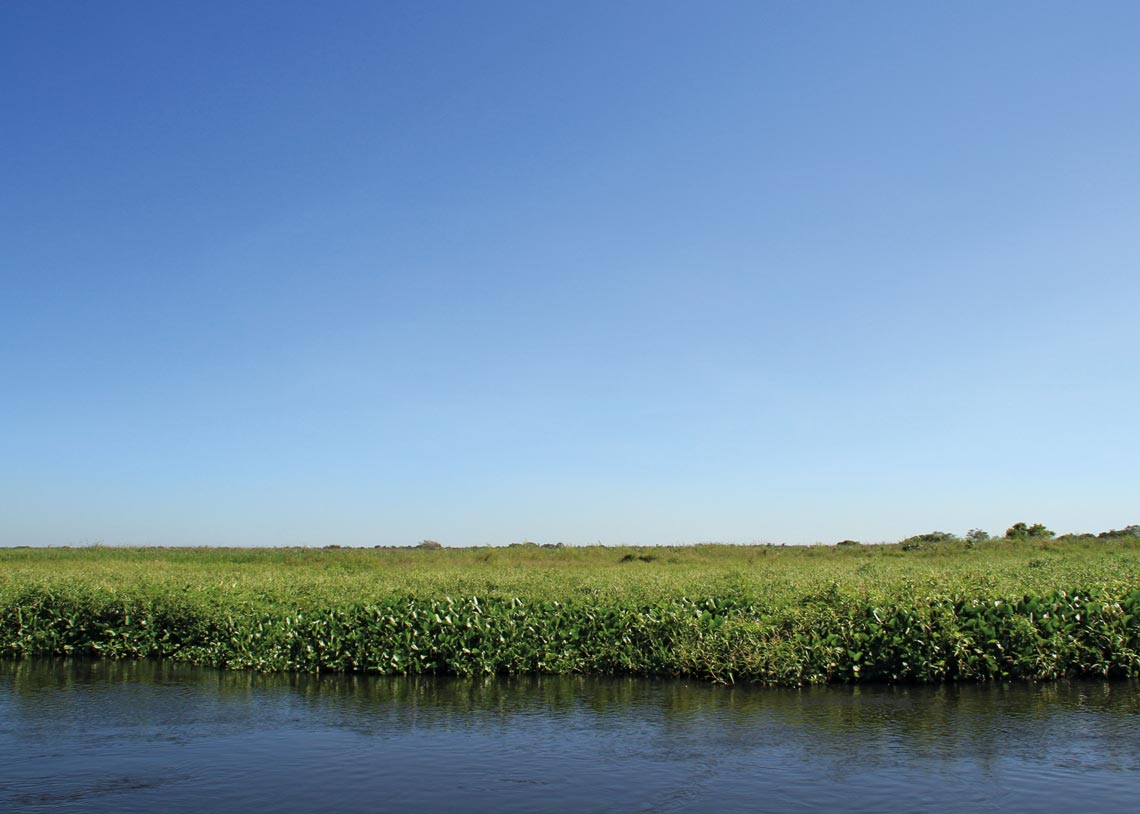 The lake is thought to be 3 to 4 meters deep, with the water level varying across the dry and wet seasons. Its bed is composed of a thick layer of fine sand and mud enriched with organic matter formed of decomposing plants, among other materials. According to Merino, it is supplied by the waters of the Negro and Aquidauana rivers, particularly during flood season. In comparison to the Rio Negro, the Aquidauana is primarily responsible for carrying sediment into the lake. This is because unlike the Aquidauana, much of the Rio Negro’s sediments remain trapped on the higher grounds through which the river passes before it reaches the plain.

The two rivers that feed the lake also behave very differently. The waters of the Rio Negro flow through several channels that form at the bottom of the lake. The waters of the Aquidauana River, meanwhile, cut through the flooded area via a single shallow channel. According to Assine, this channel is formed during the flood season. During this period, he explains, the river’s sediment-rich water overflows into the lake. “The sediment that overflows with the water accumulates on the banks, forming elevated dikes that create a channel through which the river flows when its water level decreases again,” he explains. 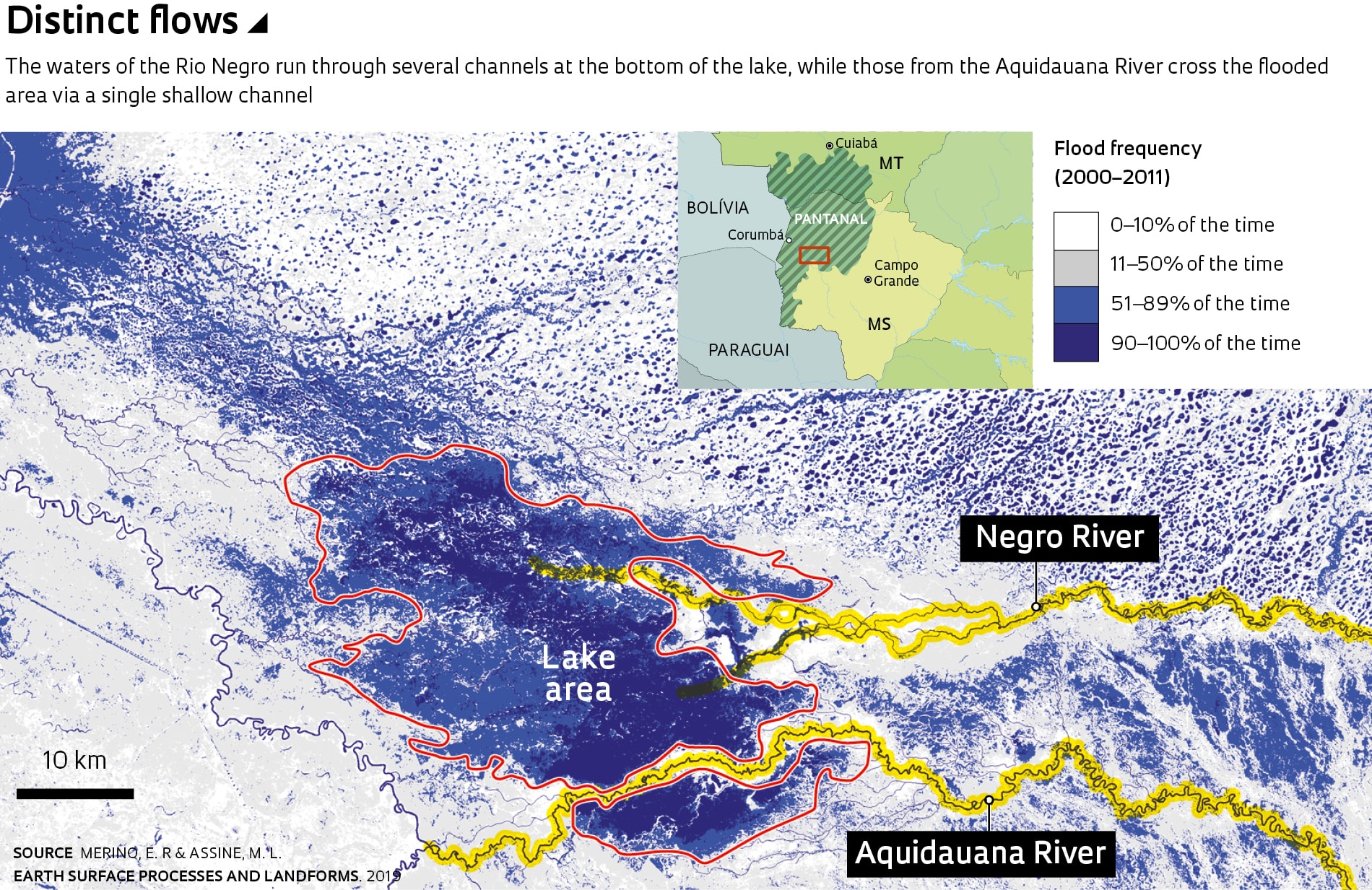 The researchers also examined the plants that cover much of the lake’s surface and found that they have long roots that spread below the waterline. Transported by the rivers, these plants accumulate on the surface and in many cases form islands of vegetation in the flooded area. Some of these islands are being colonized by pioneer plant species, capable of establishing themselves and multiplying rapidly in harsh environments.

“This is the first time that this type of fluvial lake has been discovered in the Pantanal,” notes Merino. It is estimated that the immense water body was formed by the movement of tectonic blocks, something that occurs frequently in the region. The associated geological faults produce earthquakes with a magnitude of about 3.5 on the Richter scale, which are probably responsible for the progressive lowering of the area in the middle of the Rio Negro plain, leading to the accumulation of water and the formation of a large fluvial lake. “The region is really well preserved and can only be accessed by boat,” says Merino. “It’s also very rich in biodiversity, offering favorable conditions for the reproduction of several bird, reptile, and mammal species,” adds Assine.

Geographer Renato Lada Guerreiro, a professor at the Paraná Federal Institute of Education, Science, and Technology, points out that the Pantanal is a complex environment composed of a vast biodiversity of species and a wide variety of ecosystems. “Identifying all these ecosystems in detail, whether using satellite images or field expeditions, is a very complicated task,” notes the researcher, who did not participate in the study. “The work done by Merino and Assine is an example of how we can deepen our knowledge of the landscapes that shape this biome.”

For him, the study also makes it even more evident that the lake systems in the Pantanal are not all formed by the same processes. “This ‘hidden lake’ on the plain of the Rio Negro was created by completely different geological, hydrological, and climatic processes than those that gave rise to the lakes in Nhecolândia, near the municipality of Corumbá in the state of Mato Grosso do Sul, even though these two regions are very close to each other,” says the researcher.

According to Guerreiro, the Nhecolândia lakes are the result of depressions shaped by the accumulation of fine sand carried by the wind in dry periods of the late Pleistocene, between 20,000 and 15,000 years ago. “Those of us studying the Pantanal are constantly surprised by new discoveries,” says Assine.