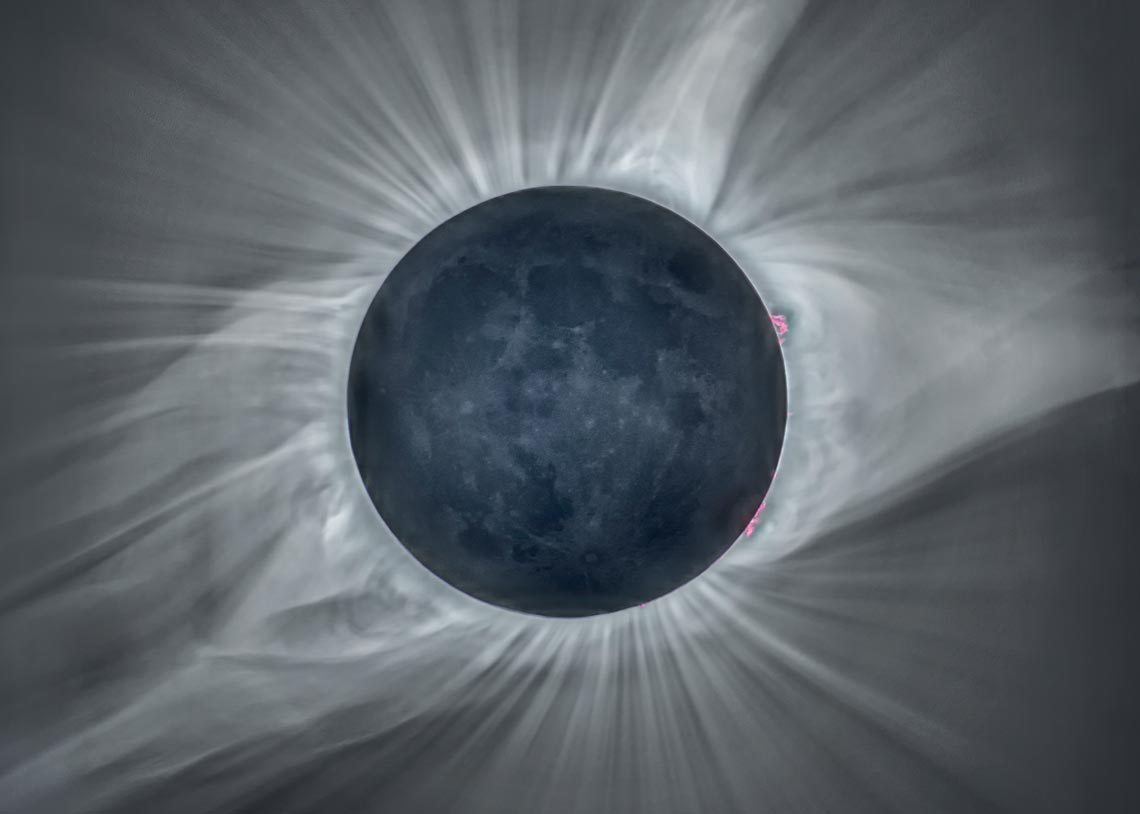 Composition of photographs of the Moon covering the Sun during an eclipse in 2017, taken by a camera attached to a telescope

At roughly 9:00 p.m. on Monday, August 21, 2017, an ultra-sensitive camera installed in the outback of northeastern Brazil detected an unusually bright light in the upper atmosphere. Situated on a farm on the outskirts of São João do Cariri, in the state of Paraíba, the equipment recorded a bright infrared flash in an area of the sky 87 kilometers (km) above ground level. The light, invisible to the human eye, grew steadily brighter for several minutes before decreasing and then increasing again in a narrow arch of the sky that stretched from Ceará to Pernambuco. In an article published in the journal Geophysical Research Letters in August, a group of researchers from Brazil and the USA offered an explanation for what caused the phenomenon. They suggest it may have been generated by disturbances in a lower layer of the atmosphere, triggered by a total eclipse of the Sun that occurred in the northern hemisphere and was partially visible in the southern hemisphere.

Geophysicists and space climate experts see the planet’s atmosphere as a fluid with multiple layers, each with a different density and composition, constantly disturbed by waves similar to those formed when a stone is thrown into a body of water. One type, known as gravity waves, are created when the planet’s gravitational field causes the fluid to return to its state of equilibrium after an initial disturbance. In the atmosphere, the distance between the peaks of these oscillations ranges from 10 to hundreds of kilometers, and they move at speeds of between 10 and 1,000 meters per second. They only propagate, however, through material media (formed by particles), such as water or air. These waves do not exist in space and are different to the similarly named gravitational waves, which propagate in a vacuum at the speed of light and are caused by collisions of high-mass celestial bodies such as stars or black holes.

On Earth, gravity waves travel through the atmosphere frequently, most of the time generated by the movement of storm clouds or tsunamis and earthquakes. The ones that caused the flashing light in 2017, however, had a different origin. They were produced by atmospheric displacements caused by the Moon’s shadow as it passed in front of the Sun, concluded a team led by physicist Igo Paulino, from the Federal University of Campina Grande (UFCG) in Paraíba. “This is the first time that the atmospheric effects of gravity waves created by an eclipse have been observed in Brazil,” says the researcher, who led the observation campaign.

On the day of the eclipse, the Moon came between the Earth and the Sun for a few hours, casting a small cone-shaped shadow—known as the umbra—that moved from one coast of the USA to the other. It began over the Pacific Ocean at 12:46 p.m. Brazilian time, before entering US territory via the state of Oregon and traveling along a narrow corridor through 14 other states.

Paulino and his colleagues from the Brazilian National Institute for Space Research (INPE) were able to calculate the properties of the gravity waves that caused the flashing infrared light detected at 87 km altitude by analyzing its characteristics, such as its position and duration. The waves were repeated every two and a half hours and moved at a speed of 634 kilometers per hour (km/h), with one of the longest wavelengths ever measured for this type of phenomenon: 1,618 km between one peak and the next. Based on this information, as well as the direction of travel, the UFCG physicist traced the path of these waves in reverse to confirm that they originated in the last position of the eclipse umbra, just over 2,200 km north of São João do Cariri and 34 km above the surface of the Atlantic Ocean.

This region of the atmosphere has the planet’s highest concentration of ozone (O3), a gas that absorbs some of the Sun’s ultraviolet radiation. By momentarily blocking the Sun, the eclipse shadow reduced the temperature in a small area of the ozone layer by about 1 degree Celsius. Despite being modest and momentary, this rapid cooldown altered the distribution of the ozone’s molecules, which became closer before moving away from each again when the sunlight returned. The contraction and expansion of the gas generated a disturbance that created gravity waves, which then spread to other layers of the atmosphere. The waves produced at the end of the 2017 eclipse, which reached a height of 87 km, changed the density and temperature of the region, altering the emission of infrared radiation by hydroxyl (OH) molecules and giving rise to the bright flash detected by the equipment in Paraíba.

“Gravity waves are an important mechanism for transferring energy from the lower layers of the atmosphere to the higher ones,” explains Japanese physicist Hisao Takahashi from INPE, one of the authors of the study, which also involved researchers from the universities of Texas and Illinois in the USA. “They change the wind system in the upper atmosphere,” he concludes.

“Few studies have been able to characterize the properties of gravity waves as well as this one,” says physicist Cosme Figueiredo, coauthor of the article and a postdoctoral researcher at INPE. Better understanding the causes and properties of gravity waves could help to improve models for predicting how the atmosphere behaves at different altitudes, something important to many applications, including space flights.