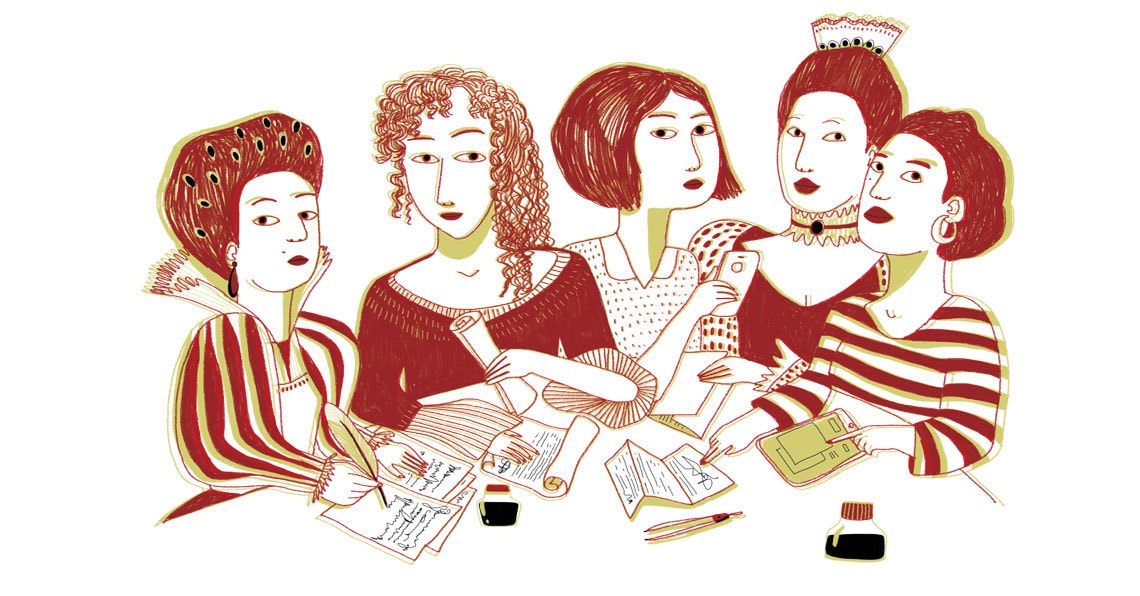 The presence of women in the history of philosophy is as old as the history of philosophy itself—there are records of female thinkers since ancient Greece. “Edith Stein [1891–1942], Hannah Arendt [1906–1975], and Simone de Beauvoir [1908–1986], the celebrated representatives of the twentieth century, did not appear out of nowhere; they stand on the shoulders of the female giants that precede them,” claims Ruth Hagengruber, director of the Center for the History of Women Philosophers and Scientists at the University of Paderborn, in Germany—a worldwide authority on the subject. “Upon establishing the Center in 2006, our goal was to renew the academic discourse on the long tradition of female philosophers.”

In Brazil, the topic has been gaining traction in recent years. Numerous academic conferences have been bearing such fruit as the blog Women in Philosophy and the Brazilian Network of Women in Philosophy, which emerged from the Workshop II Voices: Women in Philosophy, held at the University of Campinas (UNICAMP) in 2018, following the first workshop held at the Federal University of Rio Grande do Sul (UFRGS) in 2017. “The idea is to promote communication between female students, researchers, and professors from all regions of the country, and create spaces for extensive discussion, in order to question the reasons for the silencing of female canon philosophers and for the significant gender inequality in the field of philosophy,” explains one of the project coordinators, Yara Frateschi, a professor at the Institute of Philosophy and Human Sciences at UNICAMP (IFCH-UNICAMP).

Frateschi’s partners in the Network are female professors and researchers from various Brazilian universities. Together they are creating the blog Women in Philosophy, which should be part of the scientific blogs portal at UNICAMP by September. The researcher foresees a cyber network that will allow for the creation of an up-to-date gender map, that is, a map of female participation in the teaching of philosophy. Another blog tab will gather—much like the online encyclopedia maintained by the University of Paderborn—articles about Brazilian and foreign women philosophers and about the various trends of feminism. The blog will also include links to podcasts and YouTube channels.

This exchange of information and experiences reached an important milestone in June, when Frateschi, Hagengruber, and about 30 other researchers gathered at the First International Conference of Women in Modern Philosophy, held at the State University of Rio de Janeiro (UERJ) and organized by Katarina Peixoto, a researcher at the institution, and Pedro Pricladnitzk, from the State University of Maringá (UEM), who studies the work of English scientist and philosopher Margaret Cavendish (1623–1673).

The conference highlighted the many initiatives and trends of research on the subject in Brazil and in various parts of the world. One frequent point of investigation is the origin of the erasure of women in philosophy history books. “There are many women who have contributed to philosophy, either by talking amongst themselves or with male philosophers,” says Frateschi. “Some are mentioned by name in the literature, such as Elizabeth of Bohemia [1596–1662], an important interlocutor of René Descartes [1596–1650], but are not read nor considered philosophers. The first question is: why haven’t they been included in the canon—which we need to rethink?” One of the clues lies in recovering the intellectual production environment of such a restricted field as philosophy, which has contributed to female participation happening outside of the traditionally recognized knowledge spaces.

In part, women’s exclusion from the canon over the centuries has reflected their poor access to formal education and intellectual discussions—not by chance, the best-known names, such as Elizabeth of Bohemia, Sophie Charlotte (1678–1749), Anne Conway (1631–1679), and Émilie du Chatêlet (1706–1749), all belonged to the enlightened European nobility. They had discussions with philosophers and scientists of their time through letters—one of the few writing formats acceptable for women at that time, recalls Tessa Moura Lacerda, professor at the School of Philosophy, Languages and Literature, and Humanities at the University of São Paulo (FFLCH-USP). “It was customary for letters written by queens, princesses, and noble women to be burned after their death so that only men could write history,” says Lacerda, citing one of the obstacles to the proper acknowledgement of these women’s theoretical contribution. Conway and Du Châtelet wrote treatises, but even their contribution was diminished by official history.

The inclusion of material unusual to the philosophical canon, such as letters, draws attention to the need to adopt broader criteria and methods of research than those traditionally used. “Letters are raw and immersed in historical context,” points out Katarina Peixoto—who, while preparing a proposal for a workshop in Paderborn, recognized in the correspondence between Elizabeth of Bohemia and Descartes, and in women’s studies of this dialogue, the queen’s fundamental role in the elaboration of the treatise on The Passions of the Soul, the last work published by Descartes, in 1649.

Frateschi—who teaches about contemporary philosophers, such as Arendt, Seyla Benhabib, and, more recently, Angela Davis and bell hooks—points to the importance of adopting “intersectionality” for a contemporary review of the canon. For example, she cites the inclusion of North American philosopher Angela Davis, a professor at the University of California, whose trajectory is marked by social studies on the situation of women and racism, as well as direct militancy in causes of emancipation. “In Brazil, we do not yet recognize Davis as a philosopher worthy of being studied and read in undergraduate courses, and this is very likely due to the fact that she is not only a woman, but a black woman,” claims Frateschi.

Thus, the women on Brazil’s radar in terms of philosophy are names such as writer Clarice Lispector (1920–1977), art critic Gilda de Mello e Souza (1919–2005), feminist educator Nísia Floresta (1810–1885), and black pioneer novelist Maria Firmina dos Reis (1822–1917). “There is an unavoidable ethnographic element in the search for a women’s philosophy in Brazil, a kind of work that is not strictly analytical,” says Peixoto. “On the other hand, without the specific training of philosophy, that is, without the ability to recognize the contribution of these thinkers to this field of knowledge, the recognition of the legacy of intellectual women in our history becomes irrelevant or folkloric.”

In this task, Frateschi gives weight specifically to gender and race discussions—which she claims to be “a contribution that we can no longer do without.” To Frateschi, the scarce presence of women in philosophy “requires empirical data, but there is a properly philosophical dimension: the way female thinkers approach their social situation.” Peixoto notes that “women did not simply start demanding their space, or introducing the feminist struggle into philosophy. What is happening is that qualified philosophers have decided to recover factual truth, and feminists have decided to have philosophical discussions.” The researcher thus maps out what she calls two contemporary trends in the discussion of women’s philosophy. One of them is more focused on historical recovery; the other contributes to critical theory—the intellectual production that originated from the Frankfurt School, beginning in the 1930s.

Barriers to education
The issue that most urges the study of female presence in philosophy, however, is the set of obstacles that can be summed up by the following question: why are there so few women in philosophy undergraduate programs, and, above all, why do they so rarely pursue graduate studies and become professors? The issue was addressed by researcher Carolina Araújo, from the Institute of Philosophy and Social Sciences of the Federal University of Rio de Janeiro (IFCS-UFRJ), whose studies were partially disclosed in 2016 and use data from the previous year.

For the first time, official figures on the presence of women in all 58 graduate philosophy programs in the country were statistically analyzed, revealing that women made up 27% of students and 21% of teachers in that year. “Because a career in philosophy is eminently academic, these figures portray the standards of professional success in the field, and indicate that women had 2.5 times fewer opportunities to reach higher positions than their male counterparts,” explains Araújo. This phenomenon is evidenced by the fact that the current number of active professors in the Department of Philosophy of FFLCH-USP consists of 33 men and 2 women.

The researcher expanded her study by analyzing the historical data between 2004 and 2017. The results were published this year: they detect an increase in new female undergraduate students, from 34.10% to 39.12%, with an average completion rate of 36.44% over the period. However, in order to consider the full educational cycle, including master’s, PhD, and undergraduate degrees, Araújo compared the imaginary trajectories of two students, one of each sex, and concluded that, for the generation that entered the undergraduate philosophy program in 2005, each man had twice as many opportunities as each woman to reach the top of their professional career. Frateschi notes that “in a male-dominated field and in a culture that is still very sexist”, it is notable in the classroom that female students have a harder time speaking in public and articulating ideas with confidence.

Araújo believes more is needed in order to understand in detail the reasons that lead women to be a minority among philosophy undergraduate students and applicants, and why the path narrows further toward professionalization. She suggests that constant monitoring of data related to the issue be taken on as a “task for the philosophical community as a whole,” and that each institution should look for its own explanations for the imbalance. The current situation “is not good for anyone,” according to Frateschi. “When most people who produce theories are men, referring to mostly male-produced literature and the forging of hypotheses that are also tested by men, there is a tremendous risk of stereotyping and building partial knowledge,” she finishes.