Details of a tool used to build aircraft fuselages

Akaer Group, a conglomerate of five high-tech companies based in São José dos Campos, São Paulo, aims to become a global supplier to the aerospace industry, a market estimated to be worth more than US$100 billion annually. Founded in 1992 by marine engineer Cesar Augusto Teixeira Andrade e Silva, the company took an important step towards this goal in May of this year when it announced the acquisition of a 10% equity interest in Saab Aeronáutica Montagens (SAM), a Swedish aerostructure manufacturer in São Bernardo do Campo, São Paulo, owned by Saab AB. The plant produces assemblies for the Gripen fighters acquired by the Brazilian Air Force (FAB). The first of the 36 fighters in the program are scheduled to be delivered next year.

“We are the only Brazilian company with a stake in SAM. In addition to gaining experience from a program of this scale, Akaer is working and is on track to establish itself as a Tier 1 aerospace supplier,” says Silva, who has previously worked at Embraer for 15 years. Tier 1 suppliers provide complex aeronautical components, systems, and assemblies known as aerostructures, such as wings, fuselages, landing gear, air brakes, and tails. Of Embraer’s approximately 70 local suppliers, many are Tier 2 companies, but none are Tier 1. These companies largely supply components with less added value, such as machined parts that are used to build large assemblies.

Akaer’s cooperation with Saab began in 2009 when it was selected as an international partner to the program that develops the new generation of the Gripen fighter, which took its maiden flight in December 1988. The Brazilian firm was engaged in the structural design of the wings, main landing gear door, central fuselage, and rear fuselage. “It is interesting to note that Akaer became a Saab supplier well before the Brazilian Air Force picked the Gripen for its fleet. This was a testament to the company’s high-caliber staff,” says economist and aerospace expert Marcos José Barbieri Ferreira, a professor at the School of Applied Science at the University of Campinas (FCA-UNICAMP).

The success of the collaboration, which also involved technology transfer to the São Paulo–based firm, led Saab to acquire a 15% interest in Akaer in 2012, which it increased to 25% four years later. This year, its stake further grew to 28% through a stock swap, when Akaer acquired 10% of SAM. “We established a partnership to broaden our aerospace footprint and supply aerostructures on a global scale,” says Akaer Chief Operating Officer Fernando Coelho Ferraz, a materials engineer. “The capital injection has been used to expand the group and to develop a new headquarters facility at the Technology Park in São José dos Campos and in aerospace acquisitions.”

The Swedish Gripen, purchased by the Brazilian Air ForceAkaer

Among Akaer’s acquisitions are Equatorial Sistemas, a firm that develops and integrates aerospace and satellite payload systems; Opto Eletrônica’s Aeropace & Defense division, which was renamed Opto Space & Defense and that designs and builds optoelectronics technologies such as cameras for space applications; and Troya, which manufactures tooling used in aircraft assembly. These acquisitions now form Akaer Group alongside Akros, a manufacturing arm focused on high-tech products, and Akaer Engenharia, the group’s original business, which provides aerospace engineering and design services.

Underpinning Akaer’s internationalization ambitions are significant investments in research and development (R&D). The company allocates R$5 million per year—or approximately 10% of its revenue—to programs in the areas of advanced manufacturing, flexible tooling, and technology transfer in advanced optoelectronics, among other areas. “We have more than 10 active RD&I [research, development & innovation] projects in collaboration with partners such as universities, research centers, and local and global firms,” says Akaer RD&I Director Joselito Rodrigues Henriques, a mechanical engineer.

A schematic drawing showing the parts, components, and assemblies designed or developed by AkaerAkaer

Approximately 10% of the company’s 350 employees are dedicated to R&D. “Approximately 65% of our employees have undergraduate degrees, and 20% have a master’s degree or PhD. Most are engineers in different fields, aerospace designers and draftsmen, as well as physicists, chemists, computer scientists, and mathematicians,” says Henriques.

The firm’s most high-profile R&D investment is in Industry 4.0. With R$40.5 million in funding and 72 researchers (from Akaer and partners), the program works across multiple fronts, one of which is the development of flexible tooling for the aerospace industry. This category includes essential supporting structures used in aircraft assembly lines, such as mobile platforms, robots, and stairs.

“The conventional tooling used to build a wing or fuselage is developed on demand. The tooling used to make one wing cannot be used to build the other. This carries a high cost that accounts for approximately 30% of the total product cost,” explains Henriques. These structures are typically anchored to the floor and subsequently discarded when the production of a given part has been completed. “The advantage of flexible tooling is that it can be used in building multiple aerostructures. Neither Boeing, Airbus nor Embraer use flexible tooling,” says Henriques.

Research by GE has shown that 3D printing can reduce a small turboprop engine from 855 to only 12 parts and make it 5% lighter. “3D printing provides greater geometric flexibility, as well as greater material and cost savings. 3D printing is a game-changing technology that is still in development,” says Fernando Ferraz.

In the last three years, Akaer posted average revenues of just over R$50 million. While its largest customer is Saab, the company has also been a supplier to Embraer since 1993 and has been involved in virtually all major programs of the Brazilian aircraft manufacturer, including its E2 range of new-generation regional jets (see Pesquisa FAPESP issue no. 265) and the KC-390 military transport aircraft, which is the largest ever built in Brazil (see Pesquisa FAPESP issue no. 225). Akaer developed the central fuselage and wing spar for the E2 program as well as the front fuselage, vertical empennage, tail cone, and spoilers for the KC-390 program. Other customers include Boeing, Airbus, and helicopter manufacturer Helibras. 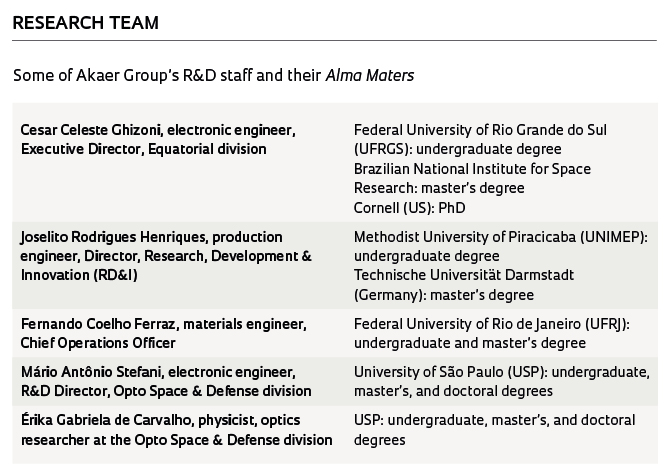 The firm’s main project under development for the space sector is a camera for nanosatellites, a designation given to cube-shaped satellites as small as 10 centimeters in size. With funding from the FAPESP Technological Innovation in Small Businesses (PIPE) program, Opto Space & Defense—an Akaer Group company—has designed a camera capable of capturing high-definition, multispectral, multicolor imagery of the earth’s surface with nearly 1-meter ground resolution. The company has been awarded grants for six PIPE projects to date, two of which are currently in progress.

“These cameras are an improvement on previous technology. Their optical architecture can be scaled to different nanosatellite platforms, which is an advantage,” explains Ferraz. The equipment, he says, is the first of its kind to be developed in Brazil. It will equip a nanosatellite due to be launched next year, which is under development by Brazilian firm Visiona Tecnologia Espacial in partnership with the National Service for Industrial Training (SENAI). “This is another project that is further strengthening our position as a global provider of high-tech solutions,” says CEO Cesar Silva.