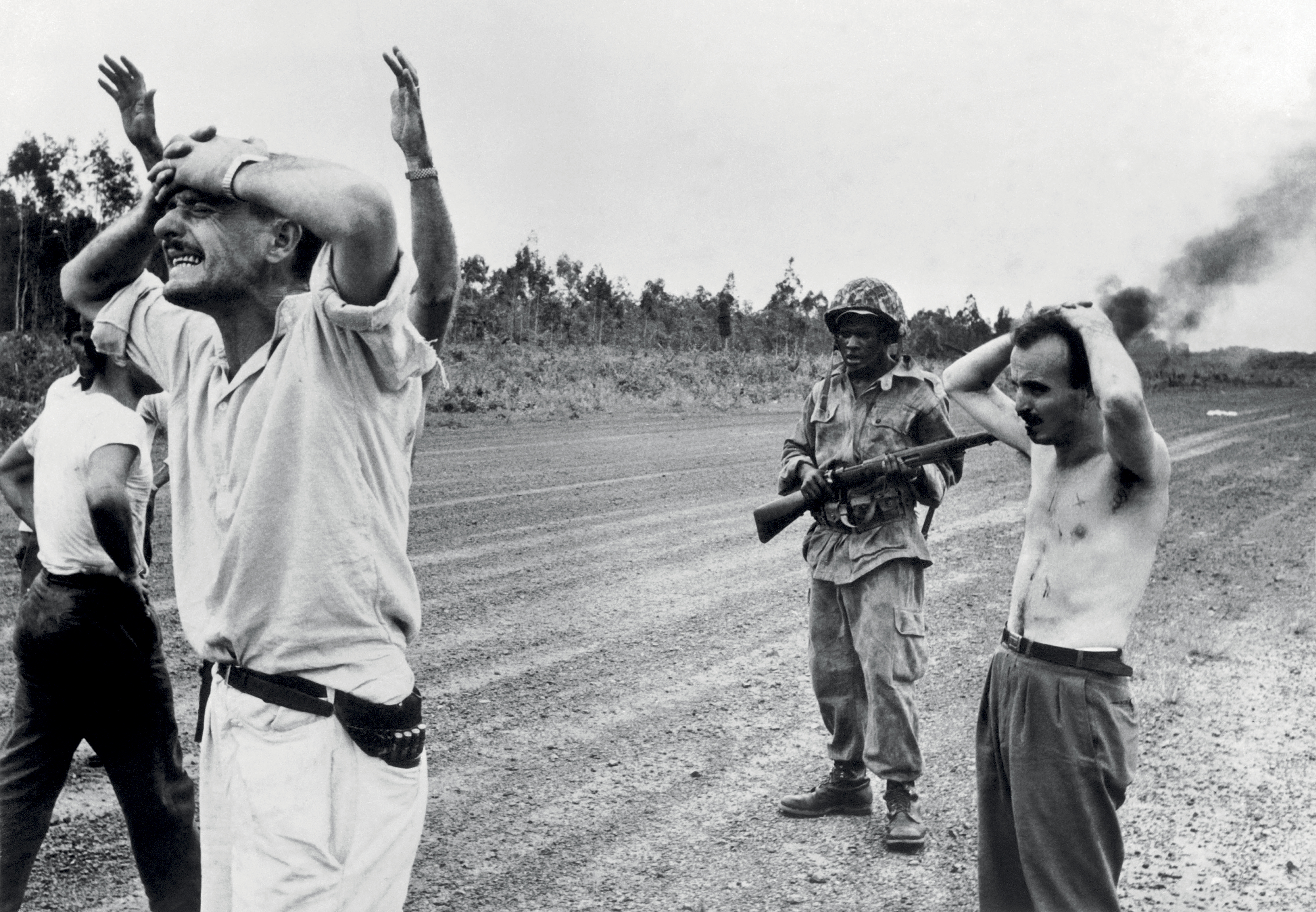 Historic photographs, identified during a two-year multidisciplinary research project financed by Instituto Moreira Salles (IMS), are beginning to shed light on some little-known aspects of Brazilian history. In one of them, produced at a time when portraits were made using heavy cameras and metallic sheet films, a group of men interrupted a battle to pose for the photographer. The portrait would be banal, if it weren’t the scene of the imminent beheading of a prisoner. The image is part of the book Conflitos: Fotografia e violência política no Brasil 1889–1964 (Conflicts: Photography and political violence in Brazil 1889–1964), which brings together the results of the project and demonstrates the widespread use of violence by the Brazilian state, its elites, and population, in resolving disputes. Located by a team of historians, sociologists, and scholars, the nearly 400 images, many of them unpublished or relatively unknown, offer a new perspective on reading the nation, one based on brutal events.

The historical picture of Brazilian photography has been formed through iconic representations of the nation, such as the portraits of Rio de Janeiro by Marc Ferrez (1843–1923), of Bahia by Pierre Verger (1902–1996), and those of São Paulo, made by Alice Brill (1920–2013), observes Heloísa Espada, IMS arts coordinator and one of the project’s organizers, together with Angela Alonso, a professor in the Department of Sociology at the University of São Paulo (USP) and president of the Brazilian Center for Analysis and Planning (CEBRAP). Contrary to what the new book seeks to show, Heloísa Espada points out that the photographic oeuvres of the authors mentioned above were characterized by optimistic visions of the country, hewing to the idea that Brazil is a peaceful nation, where conflicts are solved without the use of violence.

Postcard with image of overturned streetcar in Rio de Janeiro in 1904, during the Vaccine RevoltUnknown Photographer/Collection Mons/Jamil Nassif Abib

In the view of Ana Maria Mauad, a professor of history at Federal Fluminense University (UFF), while Ferrez helped build the history of landscape photography, Verger sought to develop an image of Brazil that was far from merely a record of the exotic and picturesque, common in the nineteenth century. “They responded visually to the specific demands of their photographic experiences. Their output is eclectic and diversified, as is also the case with Alice Brill, who, in her works, shows a vision of São Paulo ordered by social contrasts,” Mauad observes. In her view, modernist authors such as Hans Gunthr Flieg, one of the pioneers of advertising photography, and Jean Manzon (1915–1990), through his sensationalist photojournalism, imprinted in their works the image of a nation in constant progress and without social conflicts. During the 1930s, the propaganda of the Estado Novo (1937–1945) spread the myth of an already modernized nation where there were no racial conflicts. “This notion was disseminated through textbooks and the media and permeated the popular imagination,” says Ângela Castro Gomes, a professor of history at UFF.

The photos in Conflitos capture scenes involving the political elites, the state repression apparatus, and the population, in which “violence operated as a form of action for all of those involved in conflict,” according to Angela Alonso.

Offices of the 1st Battalion of the Light Barracks, in São Paulo, in 1924, after bombardment during the Tenentist RevoltAniceto De Barros Lobo/Collection Of Instituto Moreira Salles

In gathering photographs that contrast with more heroic and mythologizing visual narratives, the goal was, Heloísa Espada says, to give visibility to other images that show lesser-known aspects of national history. An example of this is the photo cited in the first paragraph, which shows a group of military combatants posing before beheading a prisoner during the Federalist Revolution, in Ponta Grossa, Paraná, in 1894. “An inscription on the back of the image indicates that this was not staged and that the subject was decapitated shortly afterwards,” observes Heloísa Espada. The Federalist Revolution was a dispute between two southern Brazilian political groups regarding the government of Julio de Castilho (1860–1903), which ended up spreading throughout the southern region of the country. Despite being a known conflict, certain aspects remained hidden, such as the large number of beheadings. “Of the 10,000 people killed in this clash, at least 1,000 were beheaded. In the 1890s, this practice spread throughout the country,” says Angela Alonso. This happened not only because of the combatants’ need to save ammunition, the sociologist explains, but also because of its symbolic character.

Photos like that of the prisoner about to have his throat cut wish to draw attention to the fact that violence was one of the methods adopted for solving conflicts, when desirable, by the Brazilian elite. “Most of the pictures show the confrontation between factions of the governing elite or their regional, civil, and military dissidents, who at many times disputed the direction of the country,” he says. But the use of violence was not restricted to these groups, he notes. Lower social strata were also defiant. Images from the 1904 Vaccine Revolt in Rio de Janeiro—against obligatory immunization—point to this aspect of history, contradicting the stereotype of the supposed passivity of the Brazilian people. “Violence is a constant feature of Brazilian political life,” says Angela Alonso, who has researched conflicts in Brazil between 1889 and 1916.

Destruction of the PSD [Social Democrat Party] headquarters in Porto Alegre, after the suicide of Getúlio Vargas in 19543 Unknown Photographer / Agência O Globo
An identical finding was made by Ângela Castro Gomes in identifying the widespread and uninterrupted use of force between 1922 and 1938, affecting both rural and urban environments. She cites two examples of these episodes: first, during the Revolution of 1924, when the military rebelled in São Paulo against the government of then-President Artur Bernardes (1875–1955), who had been advantaging the agrarian elite. The city became a battlefield, which included the construction of barricades and the occurrence of bombings. Second, the operation of the band of cangaceiros (northern outlaws), led by Lampião (1898–1938), who challenged the central government by looting properties and villages in the northeast of the country and ended up being beheaded along with his entire gang.

Images of conflicts circulated in Brazil via illustrated magazines and postcards

A squatter rebellion in 1957 in Porecatu, southwest of Paraná, is another little-known episode of national history that the book revives. In analyzing images from the period between the suicide of Getúlio Vargas (1882–1954) and the military coup of 1964, historian Heloisa Starling, a professor at the Federal University of Minas Gerais (UFMG), identified revealing photographs in newspapers at the National Archives. This included images of squatters who rebelled against private colonization companies that claimed to own the lands where 15,000 families of rural workers had been settled since 1943. “We have identified photos of the rebellion that show, for example, the presence of soccer coach and journalist João Saldanha [1917–1990]. As a member of the Communist Party, he was in town to train the rebels,” he observes. Starling believes this rebellion marks the moment that the campesinos entered the national public life, when they created the first road blockade protest ever documented in the country.

The riots that happened in Rio de Janeiro and Porto Alegre after Vargas’s suicide are also recorded in the book. The level of violence during the time can be put in perspective by the images of people setting fire to American-made cars and US bank branches, or protesting against the press for their campaign against the president. The historian explains that some of these discoveries were only possible because the research was not limited to exclusively analyzing iconographic material published in the magazines and newspapers of the time: “For historians, unpublished photos, such as those found in the National Archives, may contain valuable information. The editor’s eye is different from the historian’s.”

Visual technology
In addition to visual information regarding a little-discussed aspect of Brazilian history, the book’s images give us a glimpse at the development of the photographic technique and the modus operandi of those who captured them. In the last decade of the nineteenth century, for example, the conflicts during the beginning of the Republic yielded static scenes, made by professionals contracted in advance to record the settings of destruction. “Heavy cameras and metal film sheets demanded that people remain still, posing for the photos,” Heloísa Espada details. The same professionals and studios that sold these images for illustrated publications such as Careta and Revista da Semana (Weekly journal) also sold them individually. In this way they came to be collected by people all over the country in personal photo albums.

Meanwhile, the postcard industry, created in the nineteenth century, was undergoing a process of expansion. This contributed not only to increasing the circulation of records of violence, but also to their further dissemination. Among other reasons, the use of the postcard spread due to economic motives. It was cheaper to send a card than to mail a photograph in a sealed envelope. “Today, we are accustomed to seeing images circulating through social networks, but at that time they were spread through illustrated magazines and postcards,” says Heloísa Espada. In Brazil, postcards were produced in print runs ranging from 5,000 to 20,000 copies. This was how, until the 1930s, the images of every national conflict and civil war traversed the country.

Angela Gomes notes that there was a proliferation of illustrated magazines during the 1930s, further expanding contact with these photographs. “These publications contained more images than newspapers, so the general population had their visual and emotional experience of the conflicts expanded,” she explains. Photojournalism began to emerge as a profession in the first three decades of the twentieth century, becoming firmly established in the 1940s with the expansion of the printing industry. Before that, the work of photographers was little recognized. Many images were published without credit to the author. “As it developed, photojournalism helped to compose the modern scenario in which images are reproduced almost instantly and in diverse locations,” says Ana Maria Mauad.

Execution of a rebel against the Floriano Peixoto regime in Ponta Grossa, Parana, in 1894. Photographic studios were hired by rival groups to portray camps, troops, and victoriesAffonso de Oliveira Mello/Collection of the Fundação Biblioteca Nacional—Brazil

Designed to show the photographs in their original format, the book’s editors chose not to enlarge many of them. “Reproducing all the images in larger sizes would not serve our purpose. We decided, for example, to display the famous photo of the decapitated heads of the Lampião gang only in the original postcard format. In addition to having a sufficient impact, this way it was also possible to demonstrate its original mode of circulation,” she concludes. The project involved 13 researchers and the investigation of 50 archives, including both the public and private collections of historical museums, newspapers, and news and image agencies. An exhibition with a selection of the photos published in the book will be on display at the IMS in São Paulo until July 29.