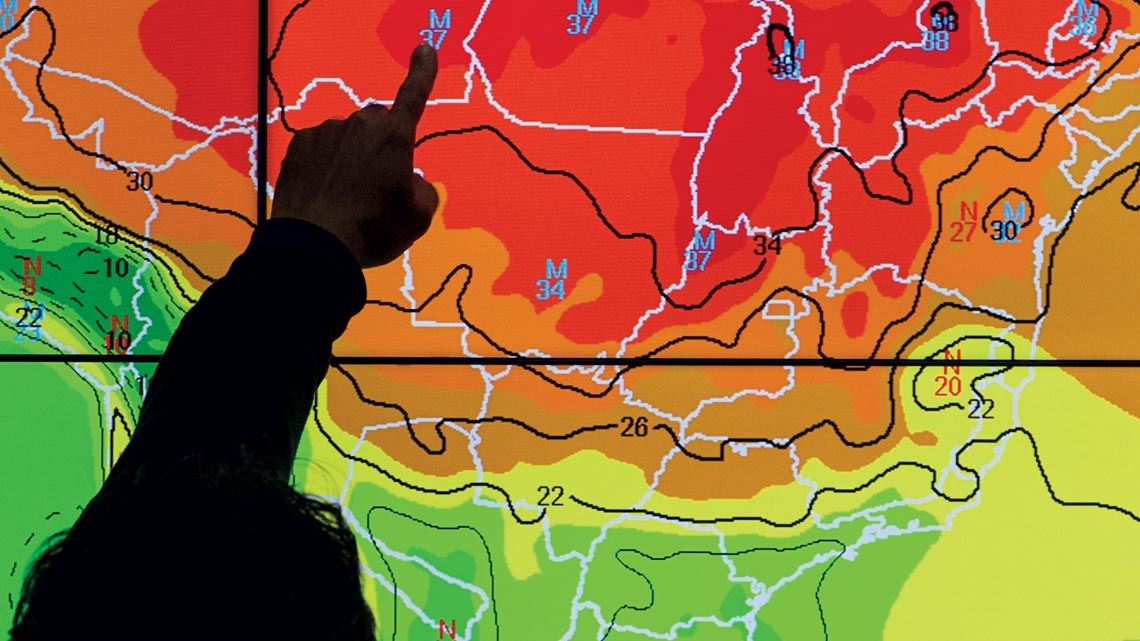 “The earth is blue.” Less than four months after Russian cosmonaut Yuri Gagarin became the first man in space on April 12, 1961, and made this now-famous declaration, then Brazilian president Jânio Quadros (1917–1992) signed a decree establishing the Organizing Group of the National Commission for Space Activities (GOCNAE), which would later become the Brazilian National Space Research Institute (INPE).

The institution, established as a civil agency to formulate Brazilian space policy and manage the country’s space program, initially focused on studying space and atmospheric sciences. Research groups emerged in scientific fields previously not studied in the country, such as space geophysics (1962), satellite meteorology (1966), and remote sensing (1969).

It was during this period that the institute created its graduate program to train professionals in the space sector. “Since there were no specialists in the area in Brazil, Fernando de Mendonça [the institute’s first director] brought in foreign researchers to teach young Brazilians, many from India. He recruited talent from the best Brazilian universities to do master’s degrees at INPE, offering classes with foreign professors, and then sent them to study for their PhDs abroad,” says former INPE director Gilberto Câmara in an article on the agency’s 50-year history.

When the Brazilian Space Commission (COBAE) was created in 1971, linked to the General Staff of the Armed Forces, INPE moved on from its initial purpose and began working under the direction of the commission. “This led to a polarization of military and civil interests that had lasting effects,” remarks Câmara. When the Brazilian Space Mission (MECB) was approved in 1979, INPE was put in charge of creating satellites and the launch vehicle’s aeronautics.

“Despite its emphatically academic origins, INPE evolved into the development of technologies and products. By adopting a challenging and innovative industrial policy in the late 1980s, it established industrial foundations in the satellite sector,” highlights Jadir Gonçalves, vice president of the Brazilian Aerospace Industry Association (AIAB).

Over the following decades, the agency became renowned for its pioneering work in various fields, including weather forecasting, astrophysics, environmental monitoring, and space climate studies. In the pages below, we highlight some of the institute’s biggest achievements, which have made it one of Brazil’s most important research centers.

Satellite factory
Amazonia-1, the first Earth observation satellite designed, built, tested, and operated entirely by Brazil was launched in February this year. It was the culmination of efforts that began last century. As part of the Brazilian Space Mission (MECB), INPE was responsible for developing two data collection satellites and two others for remote sensing. The first two (SCD 1 and 2), which were simpler to build and used less sophisticated technology, were launched in the 1990s. For the remote sensing satellites, designed to observe the planet, Brazil signed an agreement with China that resulted in the construction of six satellites (see topic). Amazonia-1 was the first fully completed in Brazil. “It was one of the greatest feats in the INPE engineering department’s history,” says Adenilson Roberto da Silva, the leader of the project. “It showed that we are able to implement the entire development cycle of satellites of this size and complexity.”

Partnership with China
The CBERS satellites are the outcome of Brazil’s most successful and long-lasting international collaboration within the space program. The agreement with China was signed in 1988 and the first satellite, CBERS-1, was launched 11 years later. At the time, the Chinese were responsible for 70% of the project and Brazil for 30%. For CBERS-3, which was launched in 2013, the work was divided equally, at 50% for each side. “The partnership with China, which had already mastered the technology, was a shortcut that allowed us to quickly gain knowledge and experience,” explains Carlos Moura, president of the Brazilian Space Agency (AEB). Antonio Carlos Pereira Jr., head of the CBERS Program, says that as well as giving Brazil access to its own satellite images, the collaboration had another important impact. “The program was fundamental to establishing a domestic space hardware and components industry,” he emphasizes.

Keeping an eye on the rainforest
INPE plays a key role in preserving the Amazon rainforest. For over 30 years, its PRODES (Amazon Deforestation Satellite Monitoring Program) and DETER (Real-Time Amazon Deforestation Detection) systems have monitored the biome using satellite images. Running since 1988, PRODES identifies the clearcutting of native forest in areas of 6.25 hectares (ha) or more. It is used to calculate the area officially deforestated each year (see graph). The DETER project, launched in 2004, provides daily deforestation alerts for areas of up to 3 ha. “Research in the Amazon, however, started a long time ago. The first study, in 1977, used data from the Landsat satellite to examine the impact agriculture was having in the Amazon,” says Gilvan Sampaio, head of Earth sciences at INPE. The institute has used its accumulated experience to train agencies from other countries with tropical forests on how to use satellite images to monitor the environment. The PRODES program recently began generating images of the Cerrado (Brazil’s wooded savanna biome). Now, INPE plans to expand it to the four other biomes in the country: the Caatinga (semiarid scrublands), Pampas, Atlantic Forest, and Pantanal.

More accurate forecasting
The inauguration of the Center for Weather Forecasting and Climate Studies (CPTEC) in Cachoeira Paulista, São Paulo, in 1994 enabled the implementation of numerical weather prediction in Brazil, based on complex computational models. “This is not to be confused with conventional weather forecasting, which INMET [Brazil’s National Institute of Meteorology] already provided in the country, and at a high quality. Numerical prediction represents a major advance, since it also includes climatology,” explains INPE director Clezio De Nardin. Previously, weather projections were highly subjective and their accuracy depended on the meteorologist’s experience. The 2010 acquisition of a Cray XE-6 supercomputer for R$50 million—using R$15 million funded by FAPESP and R$35 million from the federal government—was another milestone for INPE and Brazilian meteorology. The computer, named Tupã, is 50 times more powerful than its predecessor and capable of performing 244 trillion operations per second. By integrating information on the atmosphere, the oceans, and the Earth’s surface, the CPTEC began making earlier and more accurate and reliable forecasts, not only for Brazil, but for all of South America. It is now an international benchmark in meteorology.

Bubbles over Brazil
In the 1970s, a group led by scientist José Humberto Andrade Sobral using optical observation made a discovery that contributed significantly to our knowledge of space climate. The researchers detected plasma bubbles in the ionosphere, a layer of the atmosphere situated between 60 kilometers (km) and 1,000 km in altitude (see infographic above). Characterized by rarefaction of the ionospheric plasma, these formations interfere with satellite signals, affecting telecommunications and other operations that rely on global satellite navigation systems, such as air transport and precision agriculture. “The discovery was immensely satisfying,” recalls Sobral. “We presented the results of our research at symposiums in Brazil and abroad and nobody knew the origin of the phenomenon.” To help study the bubbles, INPE, with funding from FAPESP, created the São Luís Space Observatory in Maranhão in the 1990s, equipped with ionospheric radars. The EQUARS satellite, currently under development, will give scientists a better understanding of the phenomenon, which continues to affect satellite functioning.

Deciphering the global climate
From the pioneering study by climatologist Carlos Nobre in 1991 that assessed the impact on the South America climate of deforestation in the Amazon to the investigation led by chemist Luciana Gatti and published in Nature in July showing that the deforested rainforest is losing its ability to absorb carbon dioxide (see article), INPE has made numerous decisive contributions to our knowledge of the planet’s climate. In addition to hundreds of studies on the subject, researchers at the institution also led the scientific committee of the International Geosphere-Biosphere Program (IGBP), a global climate change and Earth system research network, worked on the Large-Scale Biosphere-Atmosphere Experiment in Amazonia (LBA) in partnership with 12 countries, and contributed to reports issued by the Intergovernmental Panel on Climate Change (IPCC), where mathematician Thelma Krug, a researcher at INPE for 37 years, is a vice-president. Since 2009, the institute has had a department dedicated to this topic: the Center for Earth System Science.