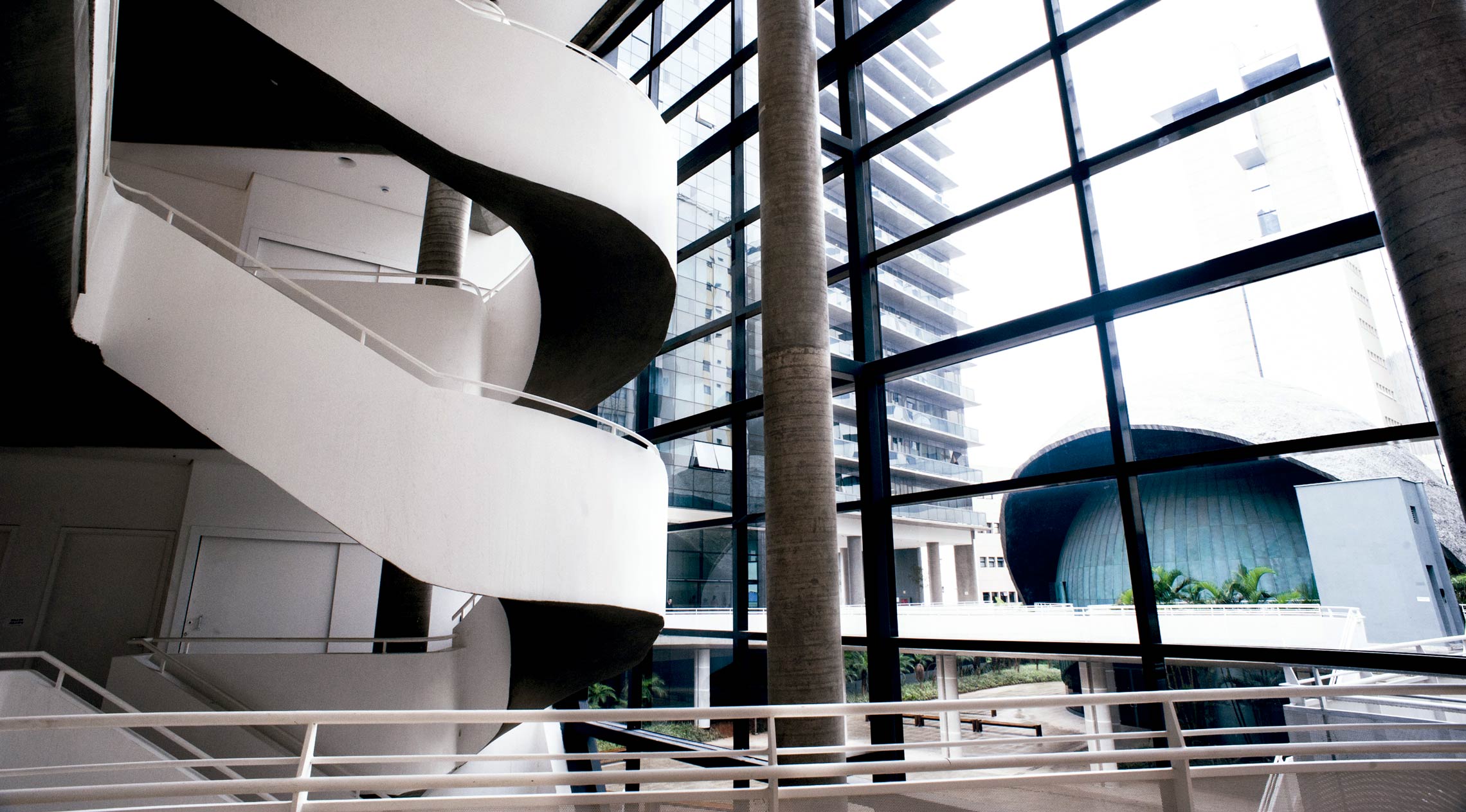 From inside Principia, you can see the dome of the planetarium and the commercial office tower, whose rental income funds the institute

Number 145 Pamplona Street, in the neighborhood of Bela Vista, São Paulo, plans to reopen its doors to physics research within the coming months. The Brazilian Institute of Theoretical Physics (IFT) was based in an old house at this address from 1952 until 2009, when it relocated to the São Paulo State University (UNESP) campus. Now, a new center for the production and dissemination of scientific knowledge is to be inaugurated at the old location in 2019: Instituto Principia. Inspired by the Isaac Newton Institute for Mathematical Sciences, which is based at the University of Cambridge, UK, Instituto Principia will operate on three key fronts: promoting collaborative research between physicists from Brazil and abroad, sharing science with the general public, and mentoring public high-school students with a strong aptitude and interest in pursuing a career in the fields of physics and mathematics.

The name of the new institute is a reference to a famous book written by Newton (1643–1727) called Mathematical Principles of Natural Philosophy, or simply Principia in Latin. “Our idea is not to compete with universities for public research funding or to act as a funding agency,” explains physicist Renata Zukanovich Funchal, scientific director at Principia and a professor at the Physics Institute at the University of São Paulo (IF-USP). “We want to be a self-sufficient research center and to raise private funding for our activities.” Principia’s main sponsoring entity is the Institute of Theoretical Physics Foundation, a private nonprofit organization created by the IFT in 1951. The foundation was responsible for managing the IFT until 1987, when UNESP took over. Even after being taken over by the university, the IFT remained in Bela Vista until 2009, when it was transferred to a building in the Barra Funda neighborhood.

One project at a time
When the IFT moved out of the old house, the foundation sold the 6,500-square-meter (m2) piece of land to a real estate developer in an arrangement that would ultimately enable them to create the Instituto Principia. The deal gave the foundation part ownership of the new properties built at the Pamplona address: a small 1,300 m2 building that will be used by about 25 researchers, a 140-seat planetarium theater called the Digital Dome, and five of the 20 floors of a commercial office tower. The foundation has already rented out 94% of its office space, totaling just over 4,000 m2. The old house has been renovated and still belongs to the foundation. Its ground floor is now a cafe-restaurant, rented and run by a third party, and the upper floors are to be used by the Principia school for young talent. “Rental income from the offices and restaurant gives us about R$3.6 million a year,” says Gerson Francisco, the foundation’s CEO. “Our aim is to cover all of Principia’s fixed costs.”

The research center is almost ready. All that remains is to install the flooring and furnish the building. The theater that houses the planetarium still needs roughly R$2 million before it can be completed, but it is already usable for lectures and smaller events. “We want to sell the naming rights of the Digital Dome to a company and seek additional support from the private sector,” says Renato Vicente, a professor at the USP Institute of Mathematics and vice chair of the Principia board of trustees. The first event at the theater took place last month. Physicist Francis Halzen, from the University of Wisconsin-Madison, USA, gave a lecture on the research being conducted and discoveries made at the IceCube Neutrino Observatory, located near the South Pole in Antarctica. Last July, the observatory—where Halzen is a chief scientist—identified the first documented source of neutrinos and high-energy cosmic rays, the most energetic particles in the Universe.

The IceCube researcher is the first to be named as a member of the overseas specialist committee responsible for selecting scientific projects to be supported by Principia. The group of international researchers will be composed of five to seven members and will perform a final analysis of the best proposals selected by the institute’s scientific committee, which is made up of scientists from the three state universities of São Paulo. Principia will not have a permanent research team. Its dedicated science building will be temporarily occupied by groups of physicists from Brazil and abroad, who will each spend 3–6 months working together on important scientific issues. “We want the institute to function as an international hub for researchers, who will spend a set period of time here studying a certain theme and will produce work together,” explains Funchal. “The center will host one project at a time.” No exact date has been set for the first group of visiting researchers to arrive, but the goal is for 2019.