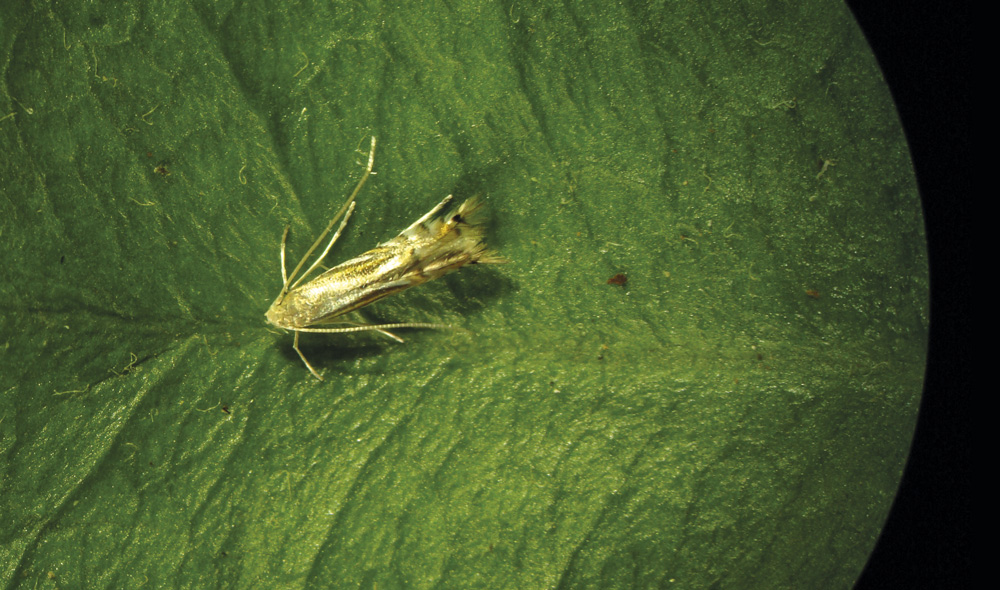 In early December, entomologist Gilson Moreira returned from an expedition to an area of Atlantic Forest in northern Rio Grande do Sul State, his luggage full of leaves and stems from trees and shrubs to analyze in his lab. Today, the specialist in taxonomy at the Federal University of Rio Grande do Sul (UFRGS) and his team are devoted to identifying as many species as possible of a nearly unknown group of insects: moths that have wingspans of only millimeters (mm) and spend most of their lives as larvae or pupae (transitioning to the adult phase) inside the leaves of plants that provide them with food.

Each species of micromoth has evolved to consume and develop in a single plant species, with few exceptions. For this reason, leaves and stems are useful for studying the insect in its different stages. The adult individuals are difficult to find and capture; not only are they tiny, but they live only hours or days and are not attracted to light, unlike larger moths. “Some years ago I noticed that the morphology of immature individuals is highly adapted to the environment in which they grow and develop, and I began to collect some of the structures of the plants they live in to study the larvae and pupae,” says Moreira.

The researcher and his colleagues are currently interested in a specific group of micromoths: family Gracillariidae. Nearly 1,900 species of these insects have already been identified in the world (only 185 in the Americas), and they have a very peculiar habit: the larvae skillfully create tunnels, which is why these moths are called leaf miners. While the larvae (caterpillars) of larger moths consume entire leaves of their favorite plants, miners leave more subtle marks. As soon as the egg hatches, the miner penetrates the leaf, and its sharp, microscopic jaws break the cell walls and consume their content rich in chlorophyll, a green pigment that makes it greenish. The naked eye can only see the bulging tunnel created by the larva, which leaves a zig-zagging trail as it consumes the leaf from within. Trained eyes can locate where the larva stops, weaves a silken cocoon, and enters the pupal stage before tearing the leaf and emerging as an adult.

Intimate relationship
Researchers are interested in learning more about the moths in this family to understand how such an intimate connection emerged between some species and their plant hosts. There is also a commercial motivation, since some micromoths in the Gracillariidae family are considered agricultural pests. One of these, Phyllocnistis citrella, originated in Asia and spread across the world in recent decades, attacking young leaves of lemon, orange, and grapefruit trees. Years ago, researchers from the Polytechnic University of Valencia in Spain studied ten orchards attacked by Phyllocnistis citrella; they found that damage occurred in 52% of new leaves not sprayed with insecticides, and in 8% of treated leaves. However, according to a 2002 study published in the Journal of Entomology, there was no injury to the flowers and fruit during the study period.

In mid-November, Moreira and his collaborators described a new miner species in the Gracillariidae family, Phyllocnistis hemera, which measures 6 mm from wingtip to wingtip during its adult phase. Moreira, along with Júlia Fochezato and Rosângela Brito, who are his master’s and doctoral advisees, respectively, found the tiny moths in May 2016 in a forest reserve in São Francisco de Paula, in the northeast region of Rio Grande do Sul, in the leaves of an embira-branca (Daphnopsis fasciculata), a characteristic Atlantic Forest tree species. They collected some larvae and leaves, marked the tree’s location using GPS, and returned in January, June, and July of the following year to search for other individuals in different stages of development, as reported in an article published in the Revista Brasileira de Entomologia (Brazilian journal of entomology).

The botanist Rosy Mary Isaias of the Federal University of Minas Gerais (UFMG) described the damage to the embira-branca leaves, while geneticist Gislene Lopes Gonçalves of UFRGS identified the moth species using genetic material extracted from the mitochondria of the larvae. “Each new species has a genetic identification that works like a barcode, allowing us to compare it with others in the genomic databases,” says Moreira. Until 15 years ago, the description of a new species was based primarily on wing pattern and genitalia.

Complex interactions
Phyllocnistis hemera is the fifth species in this genus identified by Moreira’s group; 28 are known in the Americas. The first species, Phyllocnistis tethys, was found in a wetland region of the São Francisco de Paula reserve. It lives in the leaves of Passiflora organensis, a climbing vine in the passionfruit family. With shimmering blue in the center of its wings and wingtips adorned with white and brown streaks and an orange circle, the adult is “a beautiful animal,” in the words of the entomologist.

Moreira began studying micromoths six years ago through the influence of Héctor Vargas, a Chilean colleague and collaborator. Besides miners, they have already described species that lay their eggs inside leaves or stems and induce the plant to produce a tissue that surrounds the larvae. This new tissue usually takes the form of small spheres known as galls, which serve as a shelter for the larvae. Recently, the group at UFRGS identified the existence of a complex ecological interaction in galls found in aroeirinha (Schinus weinmannifolius), a common shrub in the pampas grassland region. Nearly a century ago, the Portuguese Jesuit Joaquim da Silva Tavares proposed that the galls on aroeirinha formed around the eggs and larvae of tiny wasps. Moreira and his team have now found that it is not wasps that cause galls to form: in the aroeirinha, the galls are a reaction to eggs deposited by the micromoth Cecidonius pampeanus. Tiny wasps lay their eggs in the galls that already exist, and their larvae feed on the moth larvae and plant tissues.

Together with Belgian entomologists Jurate and Willy De Prins, Rosangela Brito used the information available about Gracillariidae to evaluate how little is known about the diversity of these insects. It is estimated that approximately 4,000 species of micromoths in this family exist in the Americas, and only 185 are known. Even so, the number calculated for the region is very low compared to the 40,000 species of micromoths assumed to exist in the world. In an article published in 2016 in the Revista Brasileira de Entomologia, Brito and her colleagues claim that from an evolutionary point of view, there is no reason for the number of micromoths to be only one third of the total number of larger moths and butterflies (lepidoptera), which total nearly 108,000 species.

The reason for the disparity? There is a shortage of trained people interested in identifying them, according to the researchers. In January of this year, an international symposium organized by Moreira and entomologist Vitor Becker, a retired EMBRAPA researcher and owner of a collection featuring 350,000 moths and butterflies, will gather the world’s leading specialists in Gracillariidae in the state of Bahia—just over a dozen people. The goal is to increase cooperation between groups and arouse interest in the area among young researchers.