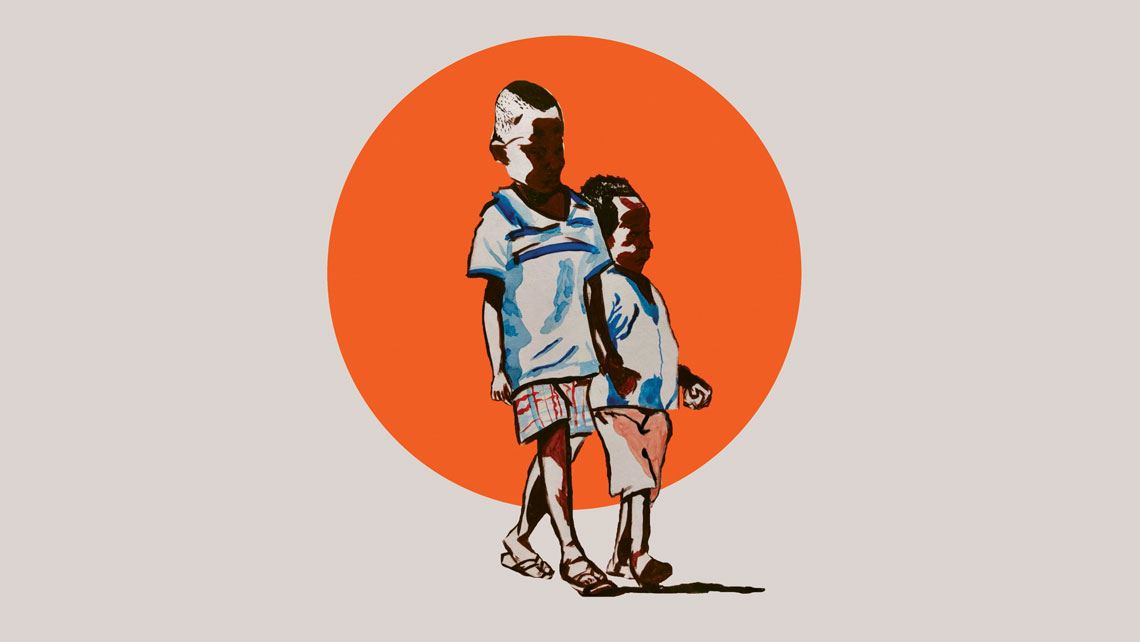 “A Venezuelan girl crosses the Brazilian customs gate. Wearing her hair in braids with a pink ribbon, she has a pink coat and carries on her slightly stooped back a backpack that appears to be heavy. Under her arm, she carries a large pillow, almost the size of her small, thin body. Her facial expression is serious, and she appears tired. Her steps are firm and a little hurried, following behind a woman who leads the way. Her gaze is lost. They go along with the flow of people, finally arriving at an area where wooden benches have been lined up; there, they are to wait for the first of several appointments. Adults and children, all looking tired, join them, also waiting for more information. In this moment, no one gets preferential treatment.”

The above is an excerpt from the field journal of researcher Fernanda Paraguassu, published in her master’s dissertation, “Narrativas de infâncias refugiadas: A criança como protagonista da própria história” (Narratives of refugee childhoods – Children as protagonists of their own story), defended in 2020 for the Postgraduate Program in Communication and Culture at the Federal University of Rio de Janeiro (ECO-UFRJ). In order to carry out the study, which has just been awarded for best in its category by the National Association of Postgraduate Programs in Communication (Compós), Paraguassu visited Venezuelan refugee shelters in the state of Roraima and interviewed children between 7 and 12 years, all refugees or asylum seekers from Venezuela and the Democratic Republic of Congo, raised in Rio de Janeiro.

“Our most significant challenge was not the language barrier, especially since the children already spoke Portuguese, but gaining the trust of the children and their guardians,” shares the researcher. During the process, Paraguassu had help from nongovernmental organizations and used playful activities to interact with them. “The goal was to establish a line of communication and bond with them,” says Mohammed ElHajji, supervisor of Paraguassu’s research at UFRJ. ElHajji is Moroccan and has lived in Brazil for three decades. “Generally speaking, the child does not choose to migrate. In addition to their lack of autonomy, they are often virtually invisible during this process. It is key that they are given an active voice.”

The same problem reverberates in the academic world. “There are few studies in Brazil about refugee and immigrant children and adolescents. Most studies on migration issues are focused on adults and their motivations,” says Katia Norões, a professor of pedagogy at the Mato Grosso do Sul State University (UEMS). “In terms of research, younger children, age 6 and under, are even worse off,” adds pedagogue Flávio Santiago, a postdoctoral intern at the University of São Paulo School of Education (FE-USP), who is currently investigating the situation of immigrants of African origin in early childhood education units in São Paulo.

In order to bring more visibility to the topic, the pair organized the dossier Migrações internacionais e infâncias (International migration and childhood), recently published in Zero-a-Seis magazine, by the Center for the Study and Research of Early Childhood Education at the Federal University of Santa Catarina (NUPEIN-UFSC). The magazine includes work by Brazilian and foreign researchers from areas such as geography, education, sociology, psychology, and law. “The goal was to frame the child as the protagonist in the discussion about migration, both in Brazil and abroad, and to approach the topic from an interdisciplinary perspective,” explains Norões.

“Immigration is an irreversible phenomenon in the contemporary world,” points out sociologist Rosana Baeninger, a retired professor at the Institute of Philosophy and the Humanities at the University of Campinas (IFCH-UNICAMP) and researcher at the Center for Population Studies (NEPO), at the same institution. According to the United Nations High Commissioner for Refugees (UNHCR), the number of people in forced displacement in 2020 reached its highest level ever recorded, totaling 82.4 million individuals across the planet. Of these, more than 26.4 million sought refuge in other countries.

According to the same survey, children, and adolescents account for approximately half of the world’s refugee population. Brazil’s situation, however, is different. According to the Refúgio em pauta (Refugees on the agenda) podcast—produced by the UNHCR in partnership with 23 Brazilian universities that are part of the Sérgio Vieira de Mello Chair—in 2020, children made up around 10% of the 57,000 refugees living in Brazil. Most of them were being raised in the states of Roraima, São Paulo, and Rio de Janeiro, and came from Venezuela, Syria, and the Democratic Republic of Congo.

“The number of refugee children here is much lower than the global average, for several reasons. One of them is the geographic distance between Brazil and countries in Africa and the Middle East, a factor that makes traveling with children more expensive and often unfeasible,” observes sociologist Monique Roecker Lazarin, from the Casa de Acolhida Dom Luciano Mendes de Almeida, which helps Venezuelan immigrants and refugees in the city of São Paulo. In a master’s dissertation defended in 2019 at the Center for Education and Human Sciences at the Federal University of São Carlos (CECH-UFSCar), Lazarin analyzed data from the National Committee for Refugees (CONARE), linked to the Ministry of Justice, and came up with a profile of the children who arrived in Brazil between the late 1990s and 2016. “There is a lack of specific data on child immigration in Brazil, which is an obstacle for researchers,” highlights sociologist Anete Abramowicz, from FE-USP, who supervised the research.

According to Lazarin, the immigrants who were forced to come to Brazil during that time were mostly adult males. Among the children, the number of boys and girls was relatively equal. In this case, according to Abramowicz, the issue of gender is key. “Refugee girls usually take on the role of caretakers at home while their mothers work, and are thus unable to attend school,” points out the researcher. “They need pedagogical attention, so they don’t drop out of school and face even more obstacles later in life.”

“Education has a key role in the social integration of immigrant and refugee children and families,” highlights Lineu Kohatsu, from the USP Institute of Psychology (IP), one of the organizers of the International Seminar on Immigration and Education, held recently at USP’s Institute of Advanced Studies (IEA). Paraguassu agrees. “Generally speaking, children learn the local language before their parents and become a bridge between their family and society. As a result, they prematurely take on roles of great responsibility, such as reading banking documents or rental agreements,” reports the researcher, author of the children’s book A menina que abraça o vento: A história de uma refugiada congolesa (The girl who hugs the wind – The story of a Congolese refugee; Voo, 2017).

Although there is no specific legislation in Brazil that guarantees refugee children’s access to education, this issue has been evolving since the 1990s, with the establishment of tools such as the Statute of the Child and Adolescent (ECA). This is what researchers Maria Luiza Posser Tonetto and Joséli Fiorin Gomes point out in their article Um filho no mundo e um mundo virado: Uma análise sobre obstáculos à efetividade do acesso à educação de crianças refugiadas no Brasil (A child in the world and an upside-down world – An analysis of the obstacles to effective access to education for refugee children in Brazil), published in the Zero-a-Seis dossier. “We have very good laws, but we need to improve how they are enforced and interpreted,” defends Gomes, a professor of law at the Federal University of Santa Maria (UFSM). Tonetto believes it is not enough to ensure access to school. “The school must also be prepared to receive these immigrants,” she observes. She also states that all the documents needed at the time of enrollment can be a challenge. “During the processing of refugees, CONARE issues a declaration that, according to the current laws, the child is guaranteed the right to education. However, due to lack of information or capriciousness, schools often do not accept this document or demand certificates that the family does not have, such as school records,” adds the researcher, who is investigating the issue in her master’s dissertation in education at UFSM.

In a postdoctoral study developed at the University of Porto, in Portugal, Kohatsu, from IP-USP, analyzed the experience of a municipal elementary school in São Paulo, where 20% of the 490 children enrolled were from other countries or were children of immigrants, especially from Bolivia. “There was a lot of discrimination and bullying of these students until 2011, when a new principal took over and began communicating more actively with parents and students. Gradually, other teachers began implementing projects that promote the appreciation of the culture of immigrants,” he shares. “According to the school staff and the immigrant families interviewed during the research, these actions significantly reduced the explicit manifestations of prejudice and discrimination, in addition to encouraging interaction between students.”

Baeninger states that the perception of immigrant and refugee children in Brazilian society has changed over time, and not necessarily for the better. “While white children of European origin, who came with their families through migration policies enforced by the Brazilian government at the turn of the 19th century and after the Second World War, were more easily accepted, sadly the same isn’t true for the children who came in recent years, many of whom are black or indigenous, and thus more vulnerable to racism and xenophobia,” she laments. The expert recalls that, in the 21st century, with the closing of the borders of the global North for economic reasons, migration takes place, above all, between countries in the Southern Hemisphere. “Brazilian society must be prepared to receive these new migration flows, particularly in the context of crises, as is the case for Afghan children, and understand that our future is multicultural,” she concludes.