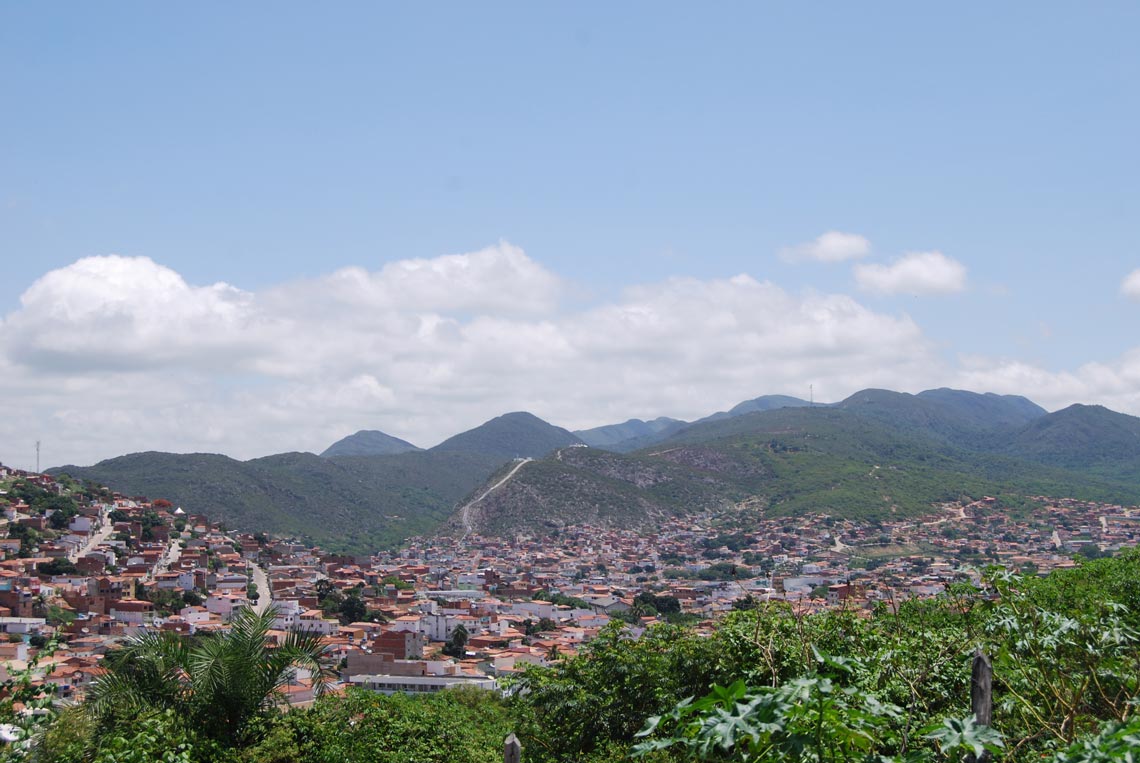 Jacobina, Bahia, was the setting for the first GM mosquito experiment

Plagued by regular dengue outbreaks, the 80,000 inhabitants of the Bahian municipality of Jacobina, situated in the north of the Chapada Diamantina mountain range, saw infestations of the Aedes aegypti mosquito practically disappear between June 2013 and September 2015 thanks to an experiment that introduced transgenic mosquitoes into the wild. The results were monitored by seven Brazilian and three American researchers and the findings, published in the journal Scientific Reports in September, have been the subject of controversy. The reason: the modified DNA is designed to kill the offspring, but the survival of a small number of the genetically modified mosquitoes has led to the emergence of fertile hybrids whose DNA is a mixture of the transgenic strain and the A. aegypti specimens found naturally in the environment.

At the center of the controversy is Yale University geneticist Jeffrey Powell, coordinator of the study and lead author of the paper. Powell believes these hybrids could be more resistant to insecticides. His hypothesis, which has not yet been tested, was presented as speculation. But the suggestion was rejected by six of the Brazilian authors, who have asked the journal to retract the article. The request is still under evaluation. “The important thing is something unanticipated happened in the field. When people develop transgenic lines or anything to release, almost all of their information comes from laboratory studies. Things don’t always work out the way you expect,” Powell said in an interview with the journal Science.

The study involved the release of a genetically modified (GM) strain of Aedes aegypti, named OX513A. It carries a gene added in the lab that produces a large amount of a protein derived from bacteria with no function in mosquito cells. The modification has two effects: firstly, the new protein occupies most of the space in the cells, causing them to collapse; and secondly, it directs the insect’s amino acids and cellular mechanisms to production of this protein, preventing it from creating the proteins it needs to survive. Together, the two effects cause cell death within a few days: long enough for the modified male to find a female, mate, pass the gene to their offspring, and die. New mosquitoes born with the protein overproduction mechanism die before they can act as a vector for disease.

The transgenic mosquito was developed by British-founded Oxitec, now a subsidiary of American biotechnology company Intrexon. It was released in Jacobina over a period of 27 months between June 2013 and September 2015. Each week, 1.2–1.8 million transgenic male mosquitoes were released near sources of infestation, gradually surpassing the natural male population, mating with females, and transmitting the lethal gene to the eggs. According to the article, the experiment reduced the A. aegypti population by up to 95% over the period studied.

Is this the solution to the recent dengue, Zika, chikungunya, and wild yellow fever epidemics faced across Brazil? And could it prevent outbreaks of other viruses transmitted by A. aegypti, such as the Mayaro virus? According to Powell, questions regarding genetic safety still need to be answered before the strategy can be adopted as public policy—a position that not all authors of the paper share, and which ultimately led to six of the Brazilians requesting a retraction. They claim they were not shown the final version of the text, which includes what they call speculation.

But this is no surprise, according to one of the authors of the article who is calling for it to be retracted or edited, biochemist Margareth Capurro, from the Institute of Biomedical Sciences at the University of São Paulo (ICB-USP). The researcher stresses that the emergence of some hybrids was not only predicted, but is considered completely innocuous. “The problem is that the article speculates about the alleged disastrous consequences of a perfectly predictable process: the hybridization of a small proportion of the offspring, where the gene does not work as desired and premature cell death does not occur,” Capurro argues. “The mosquitoes that result from crossbreeding with GM mosquitoes pose no danger, as they are no more likely to transmit disease than common insects and they could even be less resistant to insecticides.” The OX513A transgenic strain was bred using A. aegypti from Mexico and Cuba, which are more vulnerable to chemical attack than those found in Brazil—a measure designed to increase the safety of the experiment. The surviving hybrids carry part of the new strain’s genetic material, meaning they are more easily killed by insecticides, according to the researcher. As with Powell’s speculation that the surviving insects may be stronger, Capurro’s opposing hypothesis is conjecture and has not been tested in the field.

While drawing attention to the survival of hybrids, the article states that “it is unclear how this may affect disease transmission or other efforts to control these dangerous vectors” and that “the results highlight the importance of having in place a genetic monitoring program during such releases to detect unanticipated outcomes.”

We are losing the war against A. aegypti and science is an important ally to move us forward, says Malavasi

“This statement shows that there is no need for celebration, but for caution and care,” says geneticist Aldo Malavasi, founder and former president of Biofábrica Moscamed, which produced the mosquitoes used by Oxitec in Jacobina. Malavasi, who is also a coauthor of the article, has not called for it to be retracted.

Oxitec does not dispute the results of the study led by Powell. According to geneticist Natalia Ferreira, country director for the company in Brazil, the OX513A transgenic mosquitoes were submitted to and approved by the Brazilian National Biosafety Technical Commission (CTNBio). “This is considered a safe margin. If 5% of hybrid mosquitoes survived, that means the other 95% died,” says Ferreira. “The protein overexpression system was probably less efficient in the surviving insects because of the position of its insertion in the genome, which is common in transgenics. Still, the experiment resulted in weaker insects, since the protein is still expressed in larger amounts than in common mosquitoes, reducing the viability of the hybrids.”

British geneticist Luke Alphey, cofounder of Oxitec and creator of the GM mosquito, sees no risk to its reputation. “When it comes to science, every question is welcome, and remember, there is an anti-transgenics culture due to many harmful market practices. But scientifically speaking, the article makes the effectiveness of the strategy quite clear,” says the scientist, who sold his stake in the company and is now researching genetic pest management at the Pirbright Institute in the United Kingdom.

For Malavasi, the greatest obstacle to introducing GM mosquitoes into the environment on a larger scale is not the safety of the technique, but the costs of producing and releasing the insects, as well as the very challenging nature of A. aegypti itself. A four-year trial conducted by the company in the city of Piracicaba, São Paulo, cost the local government R$3.7 million. For long-term control, the costs are constant and often prohibitive. “This is an insect with a short life-cycle that reproduces by the thousands, requiring creativity from us. Transgenics is one option, but it is not the only one, and it should be explored in conjunction with other strategies,” says the geneticist. This type of insect control is most effective in small, isolated areas. To become the dominant strain, the number of GM mosquitoes has to be larger than the natural wild insect population. “This is not easy to achieve in dynamic spaces that are subject to new and repeated infestations. It is therefore important that the public try to reduce potential sources of infestation, the authorities use chemical controls, and science advances toward new strategies,” he comments.

With respect to the science, the ICB-USP research group has spent years developing mosquitoes with defective sperm that sterilize eggs after mating, with the additional inclusion of a “suicide gene” in the insect’s DNA that causes it to die upon contact with viruses. The strain is still being tested in the lab and there are no plans to introduce it to the market, but information provided by the research could guide the production of new commercial versions in the future. “A. aegypti is a complex insect and its virus ‘menu’ keeps growing. We need to diversify the strategies we use to fight it, not restrict them,” argues Capurro. She also mentions the work done by researchers from the Oswaldo Cruz Foundation (FIOCRUZ) on mosquitoes infected with the Wolbachia bacterium, which kills them.

Following the Jacobina experiment, Oxitec is now testing a new generation of GM mosquitoes in the city of Indaiatuba, São Paulo State, at no cost to the local government. In early tests, the protein overexpression system was activated in both males and females, which had to be mechanically separated during the pupal phase, an intermediate stage between larva and adult at which time it is possible to identify the sex of insects. The process was laborious and involved careful quality control to prevent females from being released. Even with the defective gene, they still bite and infect humans if they are carrying a virus. “In the second generation, the plan is to use natural differential gene expression so that the females die as larvae and only the males reach adulthood,” says Ferreira. The males do not feed on blood, and therefore do not bite.

The new method will lower the costs of breeding and releasing the insects. Adult mosquitoes are very sensitive to variations in temperature and mechanical impacts, so they cannot be transported over long distances. “There has to be a biofactory in every location where the mosquitoes are to be released. It is not possible to produce GM mosquitoes in São Paulo and release them in Manaus, for example. With the second-generation technology, knowing that only the males will survive, we can transport the eggs—which are more resistant—over these long distances,” explains Ferreira, from Oxitec.

Mosquito kits could be sold in boxes like instant noodles, with one compartment for the eggs, and another for the nutrients the larvae need when they hatch. The insect’s life cycle would be started by adding water, and after 7–14 days, adults would begin to fly out of the box, looking for females and fulfilling their mission of infiltrating the natural population. “We are losing the war against A. aegypti and science is an important ally to move us forward. Insect modification strategies are here to stay and have proven their effectiveness and safety,” says Moscamed Malavasi.