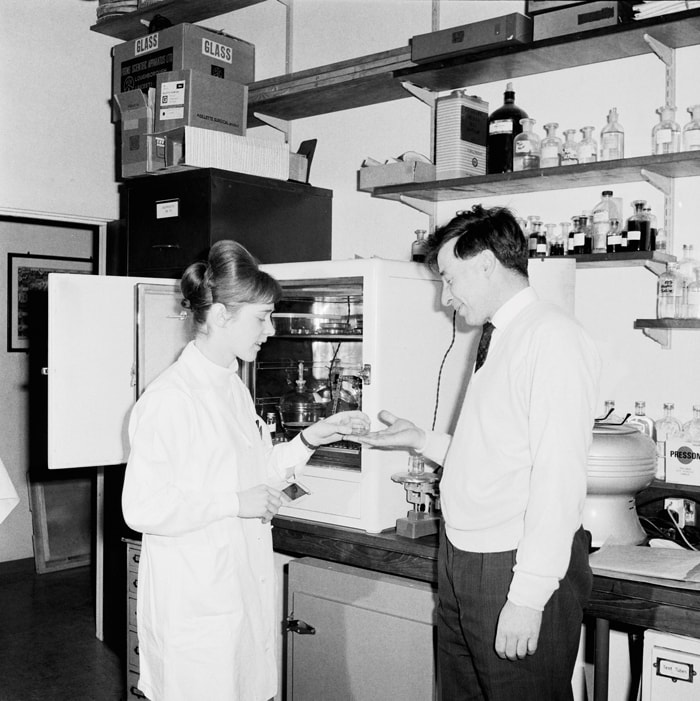 In a laboratory at Cambridge University in February 1968, Purdy hands Robert Edwards a container of eggs fertilized in vitroCentral Press / Getty Images

In the mid-1970s, British nurse and embryologist Jean Purdy made a decisive contribution to the development of in vitro fertilization (IVF), a technique in which human eggs are fertilized outside the body and then implanted into a woman’s womb. The discovery was made after letters from one of the scientists behind the technique, British physiologist Robert Geoffrey Edwards (1925–2013), were published in June this year. The correspondence had been stored at the University of Cambridge’s archives in the UK, where Edwards was a professor, according to the institution’s website. In the letters, the physiologist states that Purdy joined the team in 1968 and contributed as much as he and gynecologist Patrick Christopher Steptoe (1913–1988) to the development of IVF. Edwards was corresponding with Oldham General Hospital in Manchester, England, which was planning to put up a plaque marking the birth of Louise Brown, the world’s first IVF baby, born at the hospital in 1978. The plaque was placed at Kershaw’s Cottage Hospital and included the names of Steptoe and Edwards, but omitted Purdy’s, despite Edwards’ pleas. In 1985, Purdy died of cancer at the age of 39. Edwards was awarded the Nobel Prize in Medicine or Physiology in 2010, at the age of 85. Steptoe did not receive the award, having died in 1988. In 2015, the British Royal Society of Biology replaced the old plaque with a new one that contains the names of all three researchers. It is estimated that six million babies have been born worldwide via IVF.