Over the past five years, teams from the Endemic Diseases Oversight Office (SUCEN) have found 135 insects in the municipalities of Greater São Paulo that are carriers of the protozoan that causes Chagas disease. Of these, 30.8% were infected, but for now, the risk of contamination is small. While there are no cases of the disease reported in humans yet, laboratory analyses at SUCEN indicate that the captured insects, known as kissing bugs, had been feeding on the blood of humans and animals, such as birds, rodents, possums, dogs, and cats. “We need to be careful to avoid transmission to people,” warns biologist Rubens Antonio da Silva, a scientific researcher and technical coordinator for the Chagas disease control program at the oversight agency.

When a kissing bug was identified in 2015 in Pirapora do Bom Jesus, 61 kilometers from the city of São Paulo, and another in Taboão da Serra, 18 kilometers from the capital, Silva and his team thought they might be simply sporadic events. That conclusion fell apart when they received calls from residents of Taboão da Serra in the following years and, in 2018, also received notifications from Carapicuíba, Embu das Artes, Itapecerica da Serra, and neighborhoods in the western districts of São Paulo. In 2019, Juquitiba and Santana de Parnaíba were added to the list of municipalities reporting kissing bugs.

In Carapicuíba, researchers identified colonies with 57 insects living in possum nests under the tile roofs of three houses in a subdivision surrounded by forest, none of which were infected. In Taboão da Serra, however, 47% of the kissing bugs were infected with Trypanosoma cruzi, the protozoan that causes Chagas disease. In one house in Embu das Artes, females with eggs were found under the mattress on which the residents slept. They were not infected, according to tests done to date.

While on the rise for the first time in the São Paulo Metropolitan Region, the kissing bug population has fallen in other parts of the state. The total number of insects captured has decreased from about 6,000 in 2007 to about 2,000 in 2018, as Silva describes in an article published in April 2019 in the Brazilian Journal of Health Review. According to the Ministry of Health, the state of São Paulo reported only one new case of Chagas disease in 2016 and two in 2017. During the same two years the number of new cases went from 20 to 320 in Pará and from 3 to 24 in Amapá, states with the majority of new case reports. 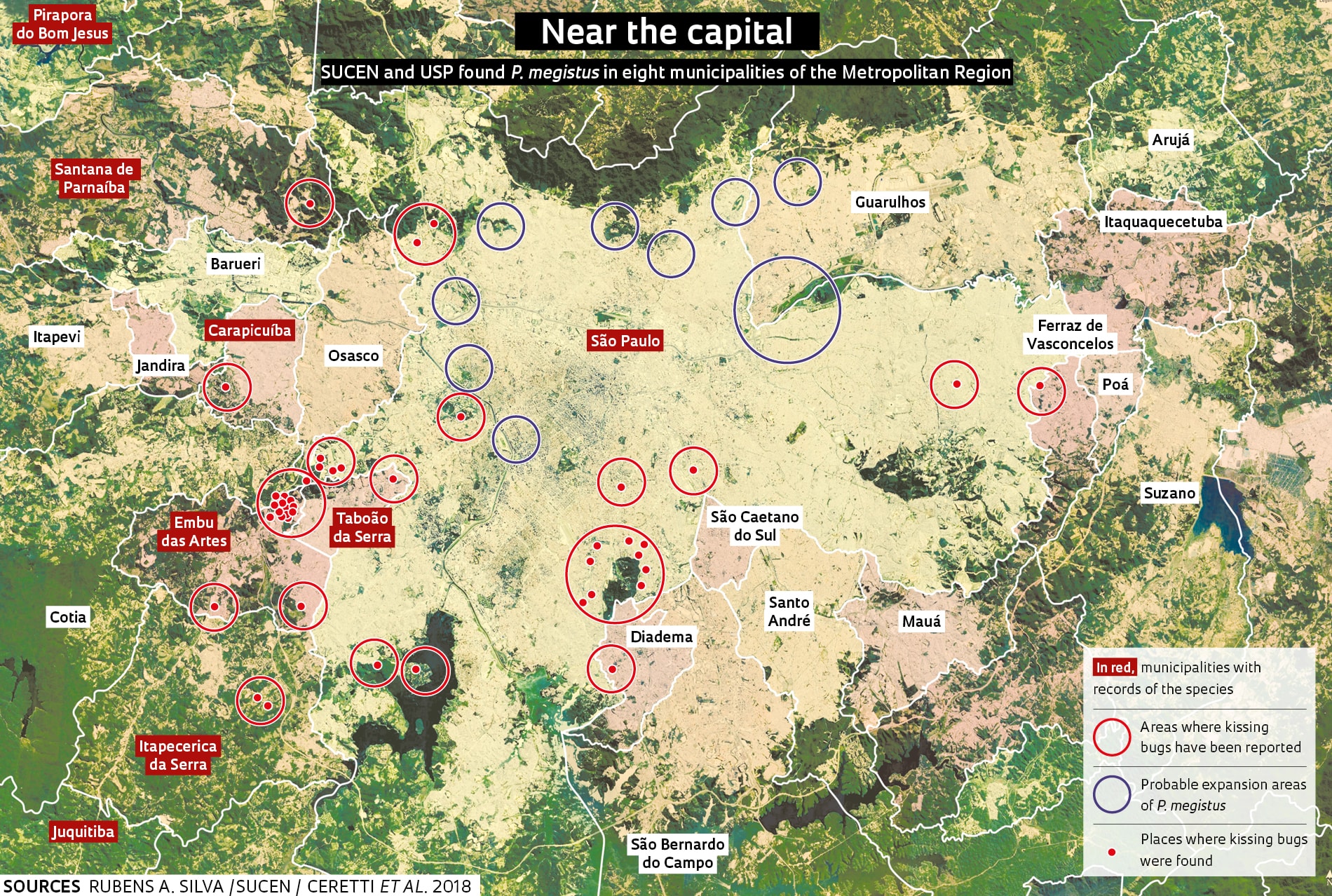 In 2006, Brazil received international certification from the World Health Organization (WHO) for practically eliminating the kissing bug Triatoma infestans, the principal species transmitting the disease, which today is restricted to regions of Bahia and Rio Grande do Sul. However, as a result of the high infection rates prevalent through the mid-twentieth century, it’s estimated that 1.2 million to 4.6 million people in Brazil have the chronic form of Chagas disease, responsible for approximately 6,000 deaths per year, mainly due to heart failure, which affects about 30% of people with the parasite according to the WHO.

Currently the species of kissing bug that causes the most concern is Panstrongylus megistus, since it is capable of living in both forests and domestic spaces. P. Megistus has a brown body with red spots and is 2.5 to 4 centimeters in length. Attracted by light, the insect may enter homes through open doors or windows. Kissing bugs become infected with T. cruzi by feeding on the blood of animals that harbor it—without themselves developing the disease—called natural reservoirs, such as possums, bats, armadillos, monkeys, sloths, pacas, capybaras, dogs, and cats.

So far, reports of P. megistus in the metropolitan region of São Paulo have been sparse. From 1999 to 2017, 15 specimens were captured in the city of São Paulo. Only two insects were examined: one collected in 2011 in Jabaquara, a southern district, was infected with T. cruzi, but the specimen collected in 2014 in Sacomã, in the southeastern part of the city, did not have the parasite. This is according to a survey by biologist Walter Ceretti Junior, from USP’s School of Public Health, published in July 2018 in the Revista do Instituto de Medicina Tropical de São Paulo. “With deforestation, rodents and possums approach houses for shelter and food,” says Ceretti Júnior. “The possibility of parasite transmission leaving the sylvatic [wildlife] cycle and expanding into urban areas is at the very least worrying,” says epidemiologist Guilherme Werneck, a professor at the Federal University of Rio de Janeiro (UFRJ).

In 2018 and 2019, SUCEN teams recorded P. megistus in areas close to forests in four neighborhoods in the western districts of São Paulo: Jardim Amaralina, Cohab Raposo Tavares, Jardim Esmeralda, and Butantã. Examining the locations of kissing bug reports in recent years, they concluded that the insects may be on the move, taking advantage of parks and forest corridors starting from the region between the Régis Bittencourt and Raposo Tavares highways. “If in fact there is a territorial expansion of the carrier insects, the situation tends to worsen,” Silva observes. He believes that if the hypothesis is correct, then since the insects reproduce more intensely in the summer, residents of northern neighborhoods such as Tucuruvi, near Cantareira Park, and people in the southern districts, near the São Paulo Zoo, will likely find the insects nearby or inside their homes by late 2019. SUCEN’s action plan includes communicating with the residents of Cotia, Osasco, São Bernardo do Campo, Santo André, and Ribeirão Pires, all potentially vulnerable areas.

“We have to avoid letting them form colonies, like in Araçatuba,” comments Silva. In 2017, 565 adults and 1,183 kissing bug nymphs of the species Rhodnius neglectus were collected from dozens of palm trees in the streets and squares of the northwestern city of Araçatuba in São Paulo State. He states that although these kissing bugs weren’t infected, the concern is that a contaminated possum might climb the palm trees in search of parrot eggs and transmit the parasite to the insects. “The identification of kissing bugs in urban areas reinforces the need to warn of the risks, even though still low, of transmission to humans,” says biologist José Eduardo Tolezano, director of the Center for Parasitology at the Adolfo Lutz Institute (IAL).

What’s known as vector transmission, i.e., via protozoan-infected insects, today accounts for 9% of the human cases recorded in Brazil by the Ministry of Health. In 18% of these cases, the means by which the parasite was transmitted is not identified. Currently the leading cause is oral transmission (72%), through the consumption of food or drink containing feces from insects contaminated with the parasite. In April this year, a study by the Tropical Medicine Foundation, published in Emerging Infectious Diseases, reported ten cases of people who presented with the initial symptoms of Chagas disease—fever, headache, and weakness—after drinking acai juice contaminated with T. cruzi, in 2017 and 2018.

Also in April this year, a transmission event of still uncertain origin was reported. In a group of 77 people who attended a religious retreat during Holy Week in Ibimirim, in the Pernambuco backcountry, 31 were diagnosed with Chagas disease, possibly contracted from contaminated food or drink. Their treatment was initiated with benznidazole, which is effective in controlling the acute phase of the disease, but has strong side effects such as allergic skin reactions, nausea, and vomiting.