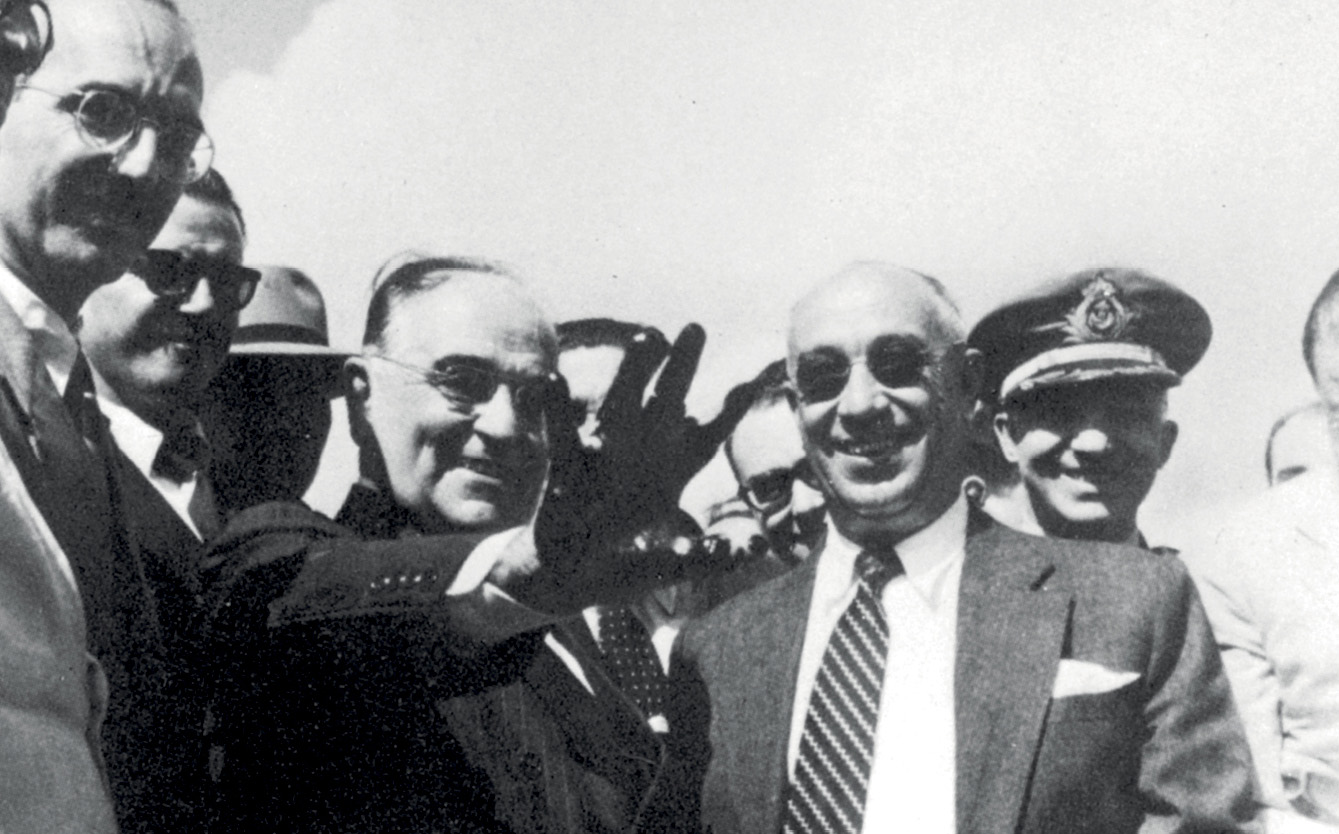 Creation of Petrobras by Getúlio Vargas (displaying a hand dirty with oil) in October of 1953, spurred prospecting across the country

With the discovery of the first Brazilian oil well in Salvador, Bahia, in 1939, the newly created National Petroleum Council (CNP) was confronted with a scarcity of geological knowledge and the lack of skilled labor for oil exploration and refining activities. The problem persisted for more than a decade, until the creation of Petrobras in 1953. Taking responsibility for forming its own workforce, it contributed to the creation of the first geology courses in Brazil and set the country on track to eventually become the largest producer of oil in Latin America and one of the 20 largest producers in the world, with an average output of approximately 2,560 barrels per day.

The search for oil in Brazil began during the empire, through the creation of the Geological Commission of the Empire of Brazil, in 1875. Headed by Canadian-American geologist Charles Frederick Hartt (1840–1878), it was charged with creating a geological map of the country and identifying its mineral wealth more systematically. Later, the Geographical and Geological Commission of São Paulo, created in 1886 and led by American geologist Orville Derby (1851–1915), made geological, geographic, and topographic charts of the state, and prospected areas for the extraction of oil and apatite.

Launched in 1957, the Geologist Education Campaign stimulated the creation of geology programs in various regions across BrazilCollection of Frederico Waldemar Lange

This search intensified at the end of the nineteenth century, when oil came to be viewed as a potential source of energy. In 1897, the country made its first deep survey, in the Tatuí region in the state of São Paulo, however, only sulphurous water was found. Other exploratory drilling was done in the following years without discovering any wells of commercial value. “The failure of prospecting was attributed to the lack of geologists and scant knowledge of the country’s geological structure,” explains historian Drielli Peyerl, who completed both a doctorate and postdoctoral fellowship at the Institute of Geosciences at the University of Campinas (IGE-UNICAMP).

Launched in 1957, the Geologist Education Campaign stimulated the creation of geology programs in various regions across Brazil

Drielli analyzed the role of the CNP and Petrobras in creating the first geology courses in Brazil. Beginning with the collection of paleontologist Frederico Waldemar Lange (1911–1988), he examined documents on Lange’s studies in geology and paleontology, geomorphological and political maps, the internal reports of Petrobras, and books and articles on the advances in these areas during the mid-twentieth century in Brazil.

At the time, indications regarding the existence of oil in Brazil were vague, rare, and controversial, which led to the country being considered a region without oil. In April 1938, Getúlio Vargas (1882–1954) tried to give new life to the search for oil by creating the CNP, responsible for the regulation of the oil and gas sector in Brazil. Its corps of technicians, however, was insufficient for expanding the country’s oil industry, a problem that became even more evident after the discovery of the first Brazilian oil well in 1939. The demand for geologists became even more urgent at this time due to the creation of the Vale do Rio Doce company in 1942, which was dedicated to the exploitation of the mineral riches in the Brazilian subsoil. Faced with this problem, the council hired foreign geologists and companies that already specialized in geophysics.

Its own workforce
Amidst a climate of nationalist debates, the CNP chose to invest in training its own professionals. In 1952, it created the Sector for Supervision and Technical Improvement (SSAT), one of the main initiatives related to the teaching of geology in Brazil. With the creation of Petrobras, a year later, this sector became the Center for Petroleum Improvement and Research (CENAP), which began a program for preparing specialized labor.

“There was a political conjunction and a technological and economic backwardness that caused Brazil to embark on a modernization effort that demanded performance from geologists, such as during the government of Juscelino Kubitschek [1956–1961],” observes geologist Emilio Barroso , from the Institute of Geosciences of the Federal University of Rio de Janeiro (UFRJ). Barroso analyzed the history of the creation of the first geology courses in Rio. In his view these professionals were also important in the construction of hydroelectric systems and the prospecting of minerals for the production of steel and aluminum.

A team of geologists from UNESP (Rio Claro campus) analyze rocks in the Tonã mountains in Bahia: a focus on scientific studiesMario Assine/UNESP

The education of geologists at CENAP began in April 1957, in Salvador, with an introduction to geology course. In July of the same year Petrobras inaugurated another discipline, the petroleum geology program, in partnership with the University of Bahia, now called the Federal University of Bahia. In order that other Brazilian universities could launch geology education programs such as that offered by Petrobras, the government launched the Geologist Education Campaign (CAGE), which incentivized the creation of geology chairs at the universities of São Paulo, Ouro Preto, Rio Grande do Sul, and Pernambuco.

In light of this, Petrobras turned its program into a specialization course focused exclusively on petroleum geology, offered to improve the skills of Brazilian geologists in accordance with their work demands and research. In 1968, with the discovery of the first deepwater well, the state-run company began investing in courses aimed at oil exploration on the continental shelf. “These specializations remain to this day at Petrobras University,” says Drielli, author of the book O petróleo no Brasil: Exploração, capacitação técnica e ensino de geociências (1864–1968) (Oil in Brazil: Exploration, technical training and the teaching of geosciences [1864-1968]), published in June 2017 from his doctoral thesis. The premise of the program is that the professionals will receive technical training and acquire experience related to the company and the petroleum industry before they begin to perform their job specialties.

New fronts
For Drielli, the state’s contribution to the training of skilled labor was crucial so that Brazil could, years later, attain oil self-sufficiency—a goal sought after since the 1940s—and become one of the world’s leading petroleum exporters. However, for technical and economic reasons, the country needs to import light petroleum to mix with the denser type found in Brazil, which is more difficult to refine. The programs also expanded the development of research related to the country’s entire geological framework, and had an impact beyond the oil, gas, and mineral exploitation sectors.

Research today is not only concerned with the present, but also with reconstructing the earth’s past, through the analysis of minerals, rocks, and fossils

“Since then, geologists have also started to work on the construction of roads and tunnels, and studies on the contamination and erosion of soils, and natural disasters,” Barroso points out. From the mid-twentieth century to today, the change has been radical. The most recent data from the Brazilian Geological Society (SBG) indicates that as of 2011, Brazil had about 8,000 geologists and geophysicists, of whom the largest percentage worked at Petrobras (19.5%) and Vale (2.5 %). The others were distributed among the Geological Survey of Brazil (CPRM), the National Department of Mineral Research, and in public and private mining and environmental consulting companies. It’s estimated by the SBG that there are 1,200 geologists and geophysicists working at institutions of higher education and research, spread among the 57 geosciences programs available today throughout Brazil. Every year, about 300 new geologists graduate across the country.

In addition to questions concerning the exploration and extraction of oil and minerals, the research undertaken in the field of geology is concerned not only with the present, but also with reconstructing the planet’s past, increasing knowledge about the composition, structure, and evolution of the earth through analysis of its minerals, rocks, and fossils. In turn, the results of scientific studies involving continuous monitoring of terrestrial dynamics are, in general, converted into strategies for the conservation and management of water, energy, mineral resources, and arable soils, as well as attempting to reduce natural disasters.