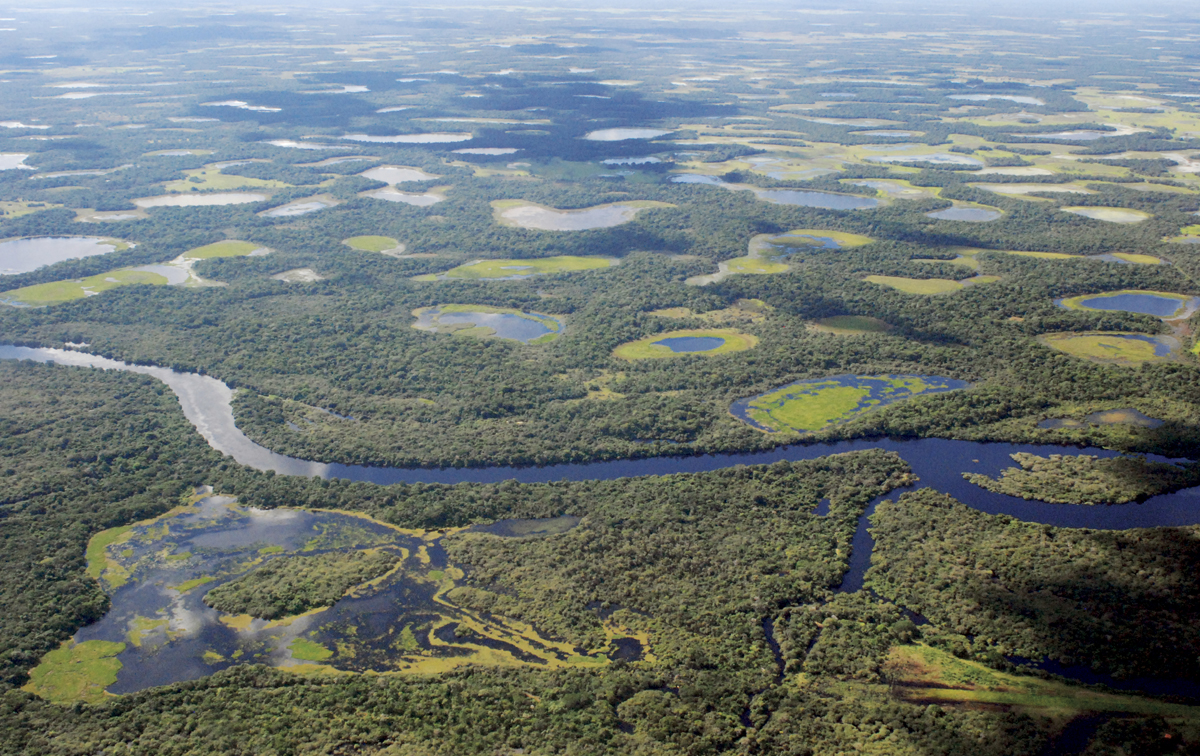 Aerial view of lakes in Nhecolândia, near the Negro RiverLUCAS LEUZINGER

Approximately 10,000 lakes form a unique and stirring landscape in the south of the Pantanal wetlands. These round or oval lakes average 2 meters (m) in depth and up to 1,000 m in length, and are scattered over an area of 24,000 square kilometers known as Nhecolândia, near the city of Corumbá in Mato Grosso do Sul. Other regions in the world such as Canada and Finland feature landscapes comprised of many lakes, but none are as chemically and biologically diverse as the lakes in Nhecolândia. Here, most of the lakes are freshwater and filled mostly by rain; others, which are black or greenish in color, contain salt water and are extremely alkaline. For decades geologists have tried to explain how these lakes were formed and how some became rich in salts. Now, a group of Brazilian and American researchers led by geologist Mario Assine of the Institute of Geosciences and Exact Sciences at the Rio Claro campus of São Paulo State University (UNESP) seems to have found some answers for Nhecolândia’s peculiar landscape. In two articles published this year in Quaternary Research and Hydrobiologia, they proposed that the lakes in this region arose approximately 5,000 years ago and that some became salty approximately 900 years ago.

For twenty years, Assine and his fellow researchers have been studying the transformations which have affected the landscapes of the Pantanal, the world’s largest flood plain. Over this period, they found that unlike the freshwater lakes, the salt ponds of Nhecolândia are surrounded by banks of sand ranging from 3 to 5 m in height and covered by savannah vegetation. These huge sand banks, which are known as cordilheiras, act as barriers to prevent the saltwater lakes from connecting to freshwater lakes during floods and from being filled by rainwater runoff. “During the dry season, when evaporation is more intense and the water level decreases, the magnesium, potassium, and calcium ions are more concentrated, leaving the water even saltier and more alkaline,” he explains. When the rains return, the lakes are fed by water from the water table, which has more salts.

Over the past 70 years, many hypotheses have been proposed to explain the formation of Nhecolândia’s landscape; the area was named for one of the first landowners in the region, Joaquim Eugênio Gomes da Silva (1856–1909), whose nickname was Nheco. One of these hypotheses argues that the lakes emerged from depressions molded from accumulations of grains of fine sand which were transported by the wind during dry periods at the end of the Pleistocene epoch, between twenty and fifteen thousand years ago. Another states that lake formation began at the beginning of the Holocene, approximately eleven thousand years ago, from continuous and abrupt changes in the course of the rivers of the region, a phenomenon known as fluvial avulsion. According to Assine, the accumulation of thicker and heavier sediments often blocks the riverbed, causing the waters to burst their banks and spread through adjacent areas (see Pesquisa FAPESP, issue No. 227). However, despite research conducted in recent decades, it was difficult to ascertain which hypothesis was most consistent, since the studies on lake formation were based only on interpreting satellite and radar imagery. What was missing was data indicating the origin of the sediments in the lakes.

Years ago, Assine and geographer Renato Lada Guerreiro, who at that time was Assine’s doctoral student, decided to sample sediments from three saltwater lakes in the northern area of Nhecolândia, which they named Ponta, Babaçu, and Máscara. Between March and November of 2014 and again in March 2015, they traveled through the Pantanal in Mato Grosso do Sul in cars adapted to cross flooded areas and in small aircraft. They went into the water, often watched by alligators resting on the banks, and used a sledgehammer to drive a 1.70-m aluminum cylinder into the bottom of the lake. When it was removed, the cylinder brought with it a thick layer of sediment, material that helps tell the story of how these lakes were formed.

Coração Lake, a salty lake at the Barranco Alto farm: its waters often reach temperatures of up to 40°CLUCAS LEUZINGER

The sediments accumulate in horizontal layers at the bottom of the ponds, with the more recent on top and older sediment below. Each layer contains records (isotopic, geochemical, sedimentary, or fossil) of what the environment was like when these sediments were deposited. “Analysis of these sediments permits us to study the biochemical changes that environment experienced over thousands of years,” explains Guerreiro, who today teaches at the Federal Institute of Education, Science, and Technology of Paraná (IFPR).

The deepest layer of sediment was composed of fine sand and covered with a layer of mud rich in organic matter, which contained micro-fossil skeletons of freshwater sponges and cell walls of microscopic algae that mainly live in salt water. These two groups of organisms live in very specific environments and their ecologies have been studied. In the laboratory, the researchers analyzed the geochemical characteristics and particle size of the sediments and identified the micro-fossils. They used a technique called optically-stimulated luminescence to date the grains of sand. The samples of organic matter which were found in the more superficial layers were dated using the carbon 14 method.

The analyses showed that the deepest layers of sediment were composed of a fine sand that began to be deposited in the Nhecolândia region about 11,500 years ago, during the transition from the Pleistocene to Holocene, a predominantly dry period. One of the micro-fossil sponge skeletons identified by the researchers is the species Heterorotula fistula, which is typically found in ephemeral freshwater ponds exposed to long periods of drought, like those found in the semi-arid environments of inland Australia. The presence of fossils of this microorganism indicates that the salt ponds in Nhecolândia were filled with fresh water and often subjected to seasonal periods of drought, with wide variations in water level. “And in the upper layers, the sponges were also freshwater, but species which are typical of stable conditions with little variation in water level, suggesting that there was a change in rainfall patterns in the Mid-Holocene period, approximately five thousand years ago,” explains Guerreiro.

As they analyzed the more superficial layers of sediment, they found a significant reduction in freshwater sponges and a significant increase in fossil diatoms, possibly resulting from the change to an environment with saltier and more alkaline water. “The pattern of deposition and preservation of these sponges in sediment acts as a record of the environmental and hydrological conditions, and suggests that there was a change in the hydrochemical characteristics of these lakes, which became saltier and more alkaline,” adds Guerreiro. He says that this is thought to have happened about 900 years ago, when temperatures and moisture increased in the Pantanal.

The findings presented in the study indicate that environmental changes which occurred during the Holocene appear to have been considerably more important for the formation of landscapes in Nhecolândia than was previously thought. “We found that the indicators of freshwater in older sediments from the salt lakes date back to a notably drier period in the Pantanal, while the alkaline and saline sedimentary records registered a period of humid climates in South America, including the Pantanal,” observes Guerreiro.