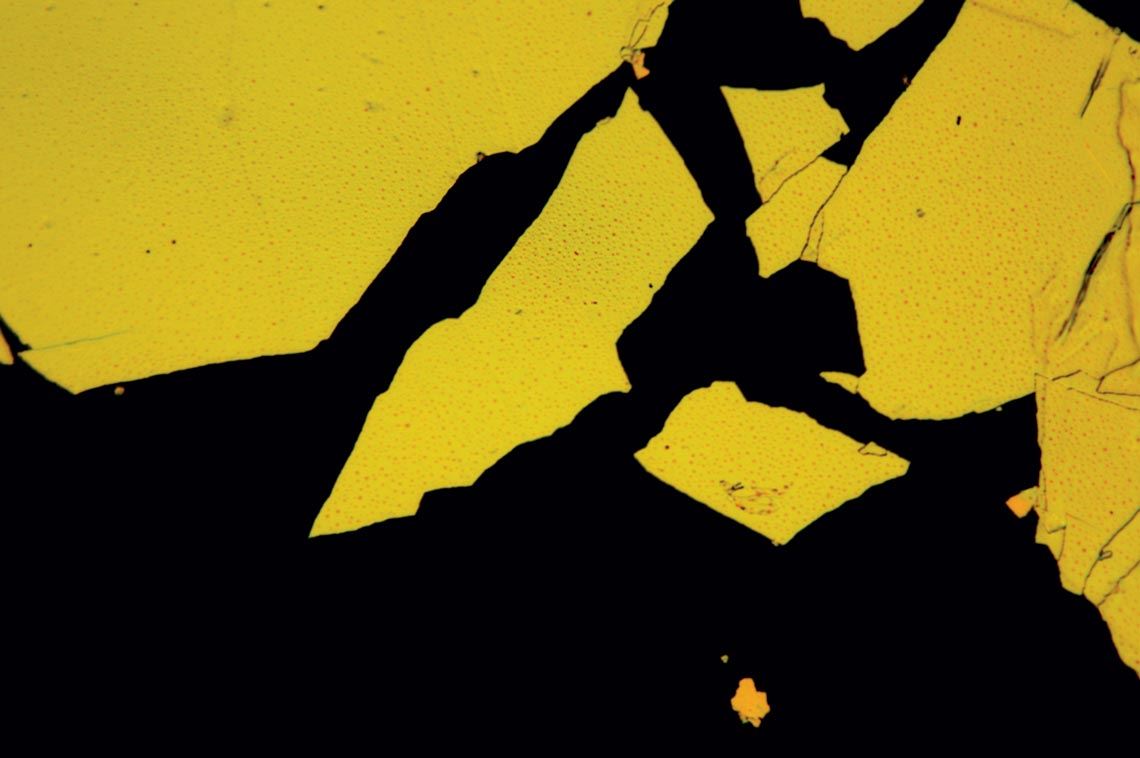 A gold nanoparticle crystal seen under an optical microscope

Extremely small nanoparticles of certain metals can exhibit unusual behavior when placed in close proximity and evenly spaced within a crystal. Using gold particles only 60 nanometers (nm) in diameter—around a thousand times smaller than the width of a human hair—a group of German and Brazilian physicists was able to produce crystals with a very peculiar property. When laser light is beamed across these crystals, light particles (photons) interact with negative charges (electrons) of matter with an intensity not observed in any other material. This effect, which was reported in a Nature article on July 29, can be used, for example, to create light-controlled transistors or more efficient solar cells than the current technology.

The researchers were able to greatly increase the strength of coupling between individual, unconfined light particles and particles of matter by adjusting the size of the nanoparticles and the distance between them. In this new coupling regime—referred to as deep-strong coupling—photons and electrons momentarily cease to exhibit their characteristic individual properties and for a split second behave as a new entity: light-matter particles called polaritons, with unique properties.

“During this interaction, the light particle combines with the particle of matter like atoms do in a molecule,” says theoretical physicist Eduardo Barros of the Federal University of Ceará (UFC), in northeastern Brazil. Barros helped with the calculations that physicist and chemist Holger Lange and his team used to develop the special crystal at the University of Hamburg. The crystal was then tested by a group led by Stephanie Reich, a physicist at the Free University of Berlin. “The properties of a photon-electron system are different than those of the particles individually, just as the properties of a water molecule are different from those of its component hydrogen and oxygen atoms,” explains Barros.

Combining particles of light and matter creates exciting possibilities for developing potentially faster and more energy-efficient technologies. One possible application for the new crystals is photon circuits, which could be used to create a whole new class of computers. In these computers, binary language (0 or 1) would be coded as blocked or passing photons rather than electrons as in today’s computers. Another possible application is using these crystals on films to make solar cells that can harvest light particles and convert them into electricity more efficiently than with the photovoltaic devices used today.

When light is beamed across the crystal, photons and electrons interact strongly with each other and behave like a new particle

These and other potential applications would be enabled by the ability of the Hamburg group’s crystals to, at least in theory, change certain properties of light, such as speed and direction. Photons are among  the rare fundamental particles that have no mass, which makes them the fastest particles in the universe—the larger the mass of a particle, the more difficult it is to set it in motion or change its path. In a vacuum, photons move at a speed of 300,000 kilometers per second, or roughly the distance to the Moon. Inside the new crystal, however, they move at a slower speed. The reason is that when photons interact strongly with electrons to form polaritons, they then behave as if they have mass and slow down.

If experiments prove that particle interaction can be so increased as to fully brake the photons, the crystal could operate, for example, as a transistor by alternating between blocking and allowing light particles to pass. “This is a new material, with properties that have never been experimented with. If we are able to control these properties, other applications could be developed,” says Barros.

The Hamburg and Berlin teams were not the first to successfully produce deep strong light–matter coupling in a lab. Previous experiments in France and Germany have also been successful, but required the use of complex and expensive apparatus, such as optical cavities and superconducting materials, which had to be kept at near zero Kelvin (-273.15 degrees Celsius). “Only a handful of highly specialized research groups were able to perform these experiments,” says Reich, who led the team that tested the new material. “Our crystals are easily synthesized and deep-strong coupling occurs naturally as they form,” explains the physicist.

This property was achieved by controlling the shape, size, and distance between the gold nanoparticles to a much higher level of precision. “We optimized the synthesis process to obtain highly uniform nanoparticles,” says Langer, of the University of Hamburg. The nanoparticles are coated with a layer of plastic material (polystyrene) and, when placed in a solution, they self-organize into evenly spaced crystal structures. At UFC, Barros and physicist Bruno Vieira, then a doctoral researcher, used computer modeling to determine the optimal size and shape of the nanoparticles and the number of nanoparticle layers inside the crystal. “We began to see some interesting effects with nanoparticles more than 40 nm in diameter, but at first we suspected a different phenomenon,” says Vieira. Using the optimal parameters that the duo at UFC had identified, the Hamburg group then synthesized the crystal using a process described in a paper published July 30 in Nature Communications, and sent it for testing in Berlin. Measurements taken by Niclas Mueller, a member of Reich’s team, yielded photon-electron values nearly identical to those modeled in the simulations.

“The coupling regime inside these crystals is the strongest obtained to date,” says Celso Villas-Bôas of the Federal University of São Carlos (UFSCar), who was not part of the study team. Coupling strength was twice as great as with superconducting materials and at least 1 million times greater than in experiments with photons and electrons trapped in optical cavities. Using this method has two advantages over previous ones that should facilitate the development of new applications: it does not require light to be confined and it can be done at room temperature.

Further testing will be required, however, before the crystal material can be used to build a photon chip or light sensor. “We’re working to build crystals with unique microscopic features and combine gold nanoparticles with particles that actively emit light. We also hope to delve deeper into what happens with materials under deep-strong coupling,” says Reich. Once the ideal materials and properties for technology applications are known, the next step will be to optimize the method of synthesizing the crystals. “We have to scale up production of nanoparticles while maintaining high quality and optimizing self-assembly to produce large, reproducible crystals,” says Lange.