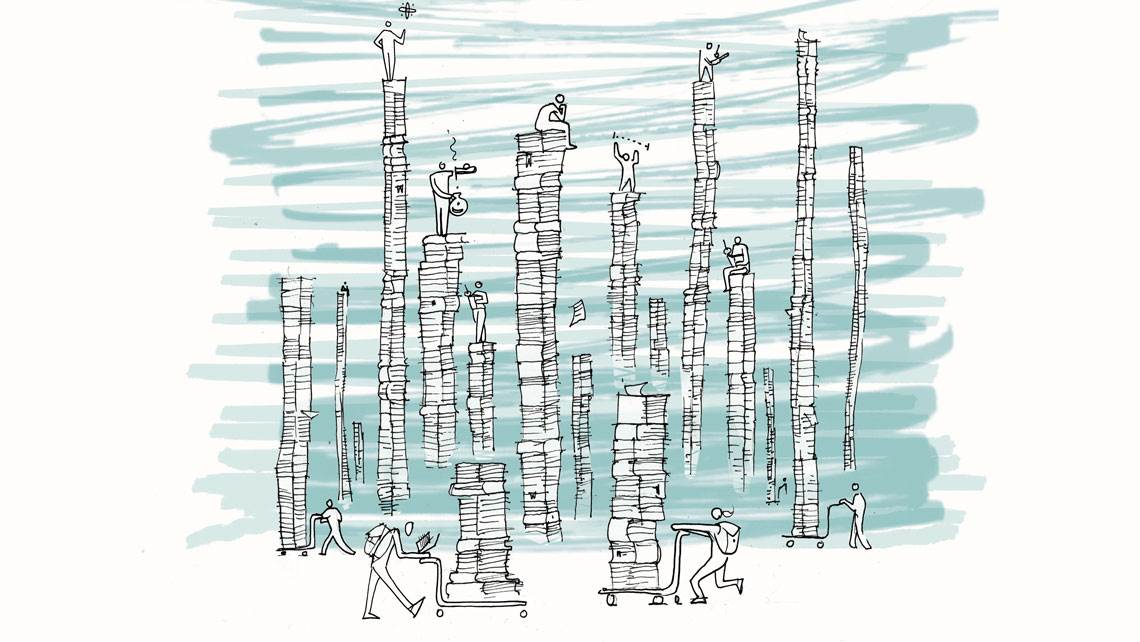 A survey by researchers at the Federal University of Rio Grande do Sul (UFRGS) suggests that limited academic mobility in Brazil has not had a significant impact on research output, at least not in quantitative terms. According to the authors, from the School of Business Administration at UFRGS, scientists who pursue a career at the same institution where they received their PhD produce as many papers on average as those who have diversified their professional experience and moved elsewhere.

The survey was based on data on 76,521 Brazilian scientists across all fields who had earned their PhDs from 2000 to 2016 and were working at a public or private education and research institution in Brazil. “We used data from the Lattes platform, a database of thousands of academic curriculum vitae, to map out these scientists’ careers,” says Denis Borenstein, a naval engineer and one of the authors of the study, published in May in the Journal of Informetrics. “We created a software system to identify where they received their PhD, if and where they took postdoctoral internships, and what institutions they had been employed at.”

The authors then intersected this information with the researchers’ publishing data, including the number of papers, journal impact factors, and numbers of citations. “This enabled us to categorize scientists into different academic mobility tiers and estimate how this affected their careers,” says Takeyoshi Imasato, director of the UFRGS School of Business Administration and one of the authors of the study. As a general rule, the study found that scientists who pursued a career at the institution where they received their PhD and those who migrated elsewhere published the same number of papers on average per year (see infographic).

According to the authors, a possible explanation is that Brazilian researchers who remain at the same institution are better at navigating its workplace dynamics, have increased access to its laboratory infrastructure and have a more well-established network to collaborate with, while those who move to other universities, often far from major cities, take time to adapt and this can affect their productivity and publishing. “New papers are often the result of research done in collaboration with other scientists—researchers who remain at the same institution can collaborate with undergraduate and graduate colleagues, and former professors and advisors,” says Borenstein. “Newcomers to an institution take time to form a network, potentially lessening their research output.”

Marco Túlio Franca, an economics researcher at the School of Business Administration at the Pontifical Catholic University of Rio Grande do Sul (PUC-RS), who was not involved in the study, notes that Brazil has recently expanded its network of federal universities; new universities are staffed by faculty trained at other institutions, “and are still less productive than incumbent institutions.”

A possible limitation of the UFRGS study is that it fails to make a distinction between public and private universities in assessing the impact of mobility on researcher productivity. Economist Tatiane Pelegrini, who explored academic mobility in Brazil in her doctorate at PUC-RS, points out that most private graduate programs are attended by individuals from other institutions, indicating a high level of mobility. “In addition, the pressure to publish is known to be greater in public institutions,” she says.

The UFRGS researchers also found that academics who remained at their alma mater were more productive if they had spent time at other institutions. Scientists who had a doctoral stay or worked at other institutions before settling in the institution where they obtained their doctorate, or who later had the opportunity to do a postdoctoral internship elsewhere, were more prolific publishers than those who simply moved to institutions other than those where they received their doctorate. Elizabeth Balbachevsky, a professor of political science at the School of Philosophy, Languages and Literature, and Humanities at the University of São Paulo (FFLCH-USP), says these findings “corroborate the notion that even minimal interaction with other cultures and research ecosystems can enrich scientists’ backgrounds and enhance their research productivity.”

Several studies have shown that visiting researcher stays can help to diversify the way scientists approach scientific problems, injecting a breath of fresh air into academic research within institutions. They also help researchers to build networks and collaborate more effectively, and often lead to more original and higher-impact research. For these reasons, researcher mobility is being increasingly encouraged worldwide, and especially in those countries that have well-established education and research systems. Germany, for example, has regulations (Hausberufungsverbot) that for decades have prohibited young scientists from being given professorships in the institutions where they completed their PhDs, forcing them to move elsewhere. “Academic mobility provides clear benefits and does need to be encouraged,” says Imasato. “But what our findings suggest is that, specifically in Brazil and in quantitative terms only, mobility alone has not much of a direct effect on research productivity. There are other underlying factors inherent to the Brazilian education and research system that likely influence this to a greater extent. These need to be identified and taken into account in order to design more effective strategies to encourage researcher mobility.”

Academic mobility in Brazil is at an intermediate stage of maturity, says Balbachevsky. “Brazilian researchers value experience at other institutions, especially foreign ones, often going on doctoral stays, postdoctoral internships, or even spending time as visiting researchers at other universities,” she says. “Back in Brazil, they use their international experience to secure professorships at Brazil’s top universities, often the same universities from which they graduated.”

Marco Seeber, an Italian researcher in the Department of Political Science and Management at the University of Agder, Norway, who specializes in higher education and science policy, explains that in Brazil, as in many developing countries, a limited number of prestigious universities train the majority of PhDs in the country, “and these tend to attract and retain the top scientists,” he told Pesquisa FAPESP. Those who are unable to receive professorships at these institutions are forced to seek opportunities at younger universities.

Hugo Horta, a Portuguese sociologist at the Faculty of Education at Hong Kong University, says the practice at elite institutions of selecting top talent from a wide pool of available candidates is known in the literature as cherry picking. “Universities hire the best academics they helped to train. These, in turn, use the institutions’ resources, infrastructure and influence to produce more and better research, and to train high-caliber researchers, most of whom will likely be hired by these same universities in the future,” explains Horta, who has done over a decade of research on the impacts of academic mobility on science output. This leads to a phenomenon known as academic inbreeding, in which scientists and professors surround themselves only with researchers they helped to train. One of the pernicious effects of inbreeding is that research agendas are not diversified with ideas from outsiders. In many cases, it can also lead to clientelism, nepotism, and favoritism.

Recent studies have shown that the level of academic inbreeding in Brazil is typically higher in prestigious institutions in the country’s South and Southeast. “In 2016, 70% of the researchers hired at the University of São Paulo [USP] had completed their doctorate at that institution, while at the University of Campinas (UNCAMP) the figure was 55.3%,” notes Luís Filipe de Miranda Grochocki, director of educational studies at the National Institute for Education Studies and Research (INEP), who studied academic inbreeding and its effects on scientific productivity in Brazil during his doctorate in 2020 at Stanford. “If these practices adversely affect research productivity, as many studies suggest, then inbreeding in these institutions would be expected to be low—but that turned out not to be the case. This means the relationship between mobility and productivity is likely more complex in Brazil.”

He believes this is largely due to the country’s regional disparities in science, technology, and innovation (ST&I). “ST&I activity is heavily concentrated in a handful of education and research institutions in the South and Southeast,” says Grochocki. “These regions have the best graduate programs, receive more funding, produce more research, train the best scientists and offer the best employment opportunities. As a result, individuals who get their PhDs at these institutions want to remain employed with them.” In addition, graduate programs, especially those awarded scores of 6 and 7 by the Brazilian Federal Agency for Support and Evaluation of Graduate Education (CAPES), an agency under the Ministry of Education, often prefer academics they have helped to train because they believe this will help to keep their programs at a high level.

Once hired, these researchers tend to stay put, mainly because most Brazilian universities value and reward researchers who build their careers in the same institution. As a result, there will often be vacancies for professorships with a single candidate: the most senior individual in the department. In contrast, in countries like the US, the UK, and Germany, universities seek to attract talents from all over the world—their prestige derives in part from the number of candidates they are able to bring in from abroad.

These nations also have a larger contingent of prestigious, traditional institutions producing high-level science. “This indirectly favors researcher mobility within these countries,” notes Grochocki. “An Ivy League university like Yale doesn’t have to limit itself to hiring the researchers it has trained. Its search radius can be wider, as there are several other excellent institutions producing scientists as qualified as its own.” Similarly, he adds, researchers graduating from Harvard can apply for opportunities at Stanford, safe in the knowledge they will get equivalent resources, infrastructure, and prestige.

He believes policies to encourage academic mobility, as part of an effort to decentralize ST&I activity in Brazil, will require that other universities and research institutes are strengthened in a way consistent with regional demand and potential. CAPES has created two programs, called MINTER and DINTER, in which graduate programs with scores from 5 to 7—the highest in the Brazilian assessment model—invite master’s and doctoral students from institutions that are far from major ST&I hubs. “Having strong graduate programs at elite universities can provide a strategic advantage, but confining these programs to a limited number of institutions and states may not be the best policy if we are to strengthen Brazil’s education and research ecosystem, reduce inbreeding, and encourage researcher mobility,” says Grochocki.