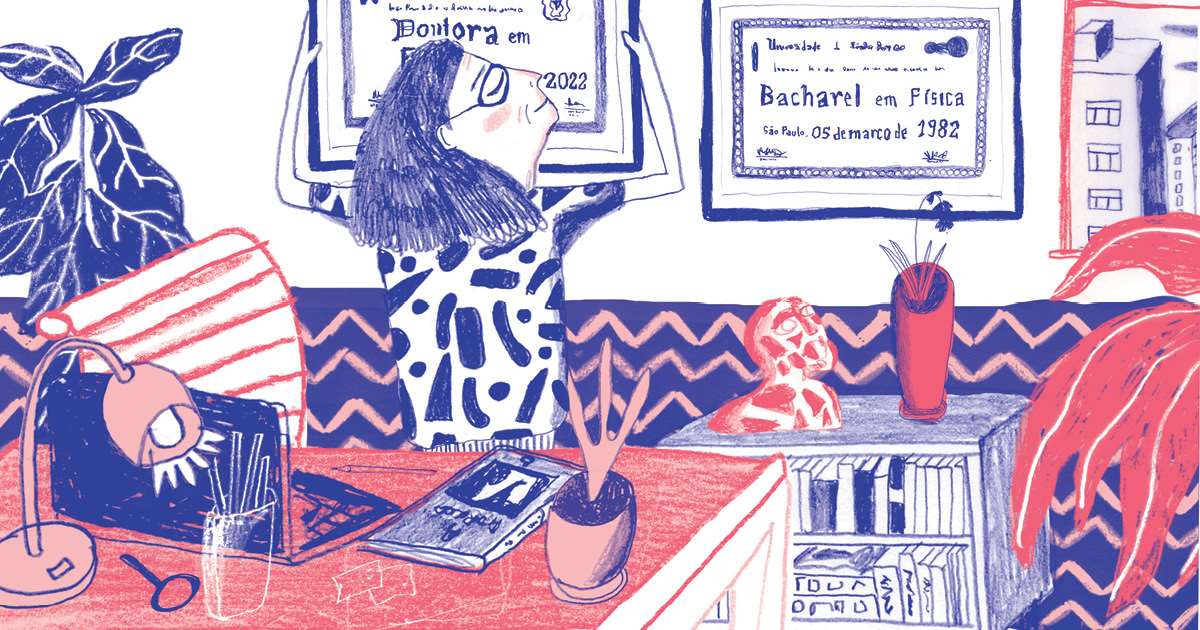 The path to a graduate degree can involve many obstacles: the need for a stable job to pay the bills, household chores, family demands, a simple lack of time, and frequently, all of the above. New graduates often have to put off their dreams of continuing in academia. Eliane de Souza Almeida, for example, will be 53 years old when she defends her PhD in 2024. Marlene Inácio became a doctor at the age of 61, while Solange Regina Schaffer was 55. The trio are part of a group that represented 34.4% of PhD holders aged over 40 in Brazil between 1996 and 2017, according to the study “Masters and Doctors 2019” by the Center for Management and Strategic Studies (CGEE).

“I’ve always had to work a lot, so I was afraid I’d never be able to get my PhD,” says Inácio, who graduated in psychology in 1979 and went on to specialize in clinical and hospital psychology before being absorbed by the activities of the Endocrinology Department at the Hospital das Clínicas, School of Medicine, University of São Paulo (HC-FM-USP). After I began seeing patients with sexual development disorders, I was invited to take part in an international research collaboration. “Every member of the group had a doctorate, except me. So Professor Berenice Bilharinho encouraged me to use this sample of about 150 patients in my doctoral research,” she says. The result was her thesis, “Psychosocial and sexual aspects of patients with long-term sexual development disorders,” which she defended at FM-USP in 2011.

“After my PhD, I had the opportunity to teach, which is something I had never imagined,” says Inácio, although her career has certainly focused more on clinical and hospital psychology than academic activities. “Based on the contributions of my thesis data, another 10 have emerged, two in psychology.”

Solange Regina Schaffer graduated in pedagogy in 1987 and became a public servant at the Jorge Duprat Figueiredo Foundation for Occupational Safety and Medicine (Fundacentro) soon after. In 2004, 10 years after specializing in occupational hygiene—a scientific field that investigates workplace processes, accidents, and illnesses among workers—Schaffer decided to systematize what she had learned so far. She was surprised by the result: “Studying a master’s degree allowed me to achieve scientific rigor for everything I had learned over almost 20 years at the institution.”

Another decade later, she earned a doctorate. “When I started my master’s, I was 40 years old and my daughter was 3. Reconciling professional and domestic responsibilities was extremely exhausting during my master’s degree,” she admits. “So I decided to wait for my daughter to become a bit more independent before continuing with my studies.”

As her daughter grew up, Schaffer began looking for a PhD program that intersected various scientific fields. She ended up at the Federal University of ABC (UFABC), where in 2020 she defended her thesis, “Public policy ‘Practical experience of the apprentice’: Social insertion, professional training, and workplace accidents on the factory floor.” “The topic arose from a scientific gap in the investigation, analysis, and systematization of how teenagers and young apprentices hired by companies attribute meaning to their professional experiences in these workplaces,” she explains. The experience was successful. “I took a previously well-explored topic, and with the expertise of my advisors I was able to deepen our scientific knowledge in the humanities and social sciences.”

“People who do PhDs later in life are usually already employed and interested mainly in the qualification, rather than intending to start a research career. This is predominant in the social and human sciences, but less so in the natural sciences,” explains Simon Schwartzman, a sociologist who presided over the Brazilian Institute of Geography and Statistics (IBGE) between 1994 and 1998. “It may be that women take longer to resume graduate school because of motherhood. If they have children when they are in their 20s, they may need to wait some time to restart their studies and research careers, especially if they have greater responsibility for taking care of the children than their husbands,” he adds.

This was the case for Eliane de Souza Almeida, who is currently studying a PhD at USP’s School of Arts, Sciences, and Humanities (EACH). She entered higher education at the age of 27, when her first daughter, Isabella, was 3. With no one to leave her with, she had to take her with her to the classroom. “I graduated as a journalist in 2001,” she recalls. She never forgot the words her advisor Joseph Luyten gave her as she wrote her thesis, on the importance of having more black women in academia. Almeida completed her master’s degree in 2005, but only started her PhD more than 10 years later.

In the time between, she learned about the Freedom of Expression and Censorship research group at USP’s School of Communications and Arts, as well as Teatro Experimental do Negro (“Black Experimental Theater”) and its founder, Abdias do Nascimento (1914–2011). “Today I investigate Teatro Experimental do Negro from the perspective of constructing an emancipatory political discourse. I’ve been studying how Abdias created an antiracist discourse and used theater as an instrument for establishing a black intelligentsia,” explains Almeida. “Being a PhD student at age 51 is a great challenge, but I also feel more intellectually mature and able to extract the best from this process.”

Mature doctorates such as those described here are common in many institutions, such as the Federal University of Paraná (UFPR). “Students aged 40 and over represent about 25% of our total PhD students. This number has remained stable over the last five years, with women representing the majority,” says Francisco Mendonça, dean of research and graduate studies at UFPR. “Between 2018 and 2022, more than 60% of doctoral students on medical courses were over 40, followed by anthropology, education, and civil engineering.”

At the University of São Paulo (USP), this age group accounts for a smaller share. “Of the new entrants between 2000 and 2022, they represent 16.5% of the total. Women predominate in the humanities, while men over 40 are the majority among PhD students of this age group in the exact and health sciences,” says Niels Olsen Saraiva Câmara, vice dean of graduate studies at USP.

At the Federal University of Pernambuco (UFPE), the number of mature PhD students is on the rise. “The number of doctoral students aged over 40 has been increasing in the last four years. In 2019, we had a total of 696 mature PhD students at the university, accounting for 17% of the total; now in 2022, we have 851, 20% of the total. The fields where this age group is most represented are biochemistry, pharmacy, biology, oceanography, physics, and chemistry,” says Carol Leandro, dean of graduate studies at UFPE.

Despite the interest in graduate studies among people in their 40s, the “Masters and Doctors 2019” survey by the CGEE found that the age of master’s and doctoral students in Brazil has been decreasing over recent decades. “The data show a reduction in the average age. In 1996, doctors graduated at an average age of 39.4 years. In 2017, this average had fallen to 37. Among women, the reduction was even greater. Their average age in 1996 was 40, a year older than men. In 2017, the average was almost the same: 36.9 years for women and 37 years for men,” says Sofia Daher, coordinator of the study.

However, while having teachers and researchers qualified earlier is considered good for the country, it is a warning sign for those wishing to pursue graduate studies after 40. “Some institutions that grant scholarships have age limits. Age should not be an impediment to accessing research funding,” stresses Almeida, who plans to defend her PhD within the next two years and already has plans for postdoctoral research on Martinican sisters Paulette Nardal (1896–1985) and Jeanne Nardal (1902–1993). “They were the first black women to set foot on the Sorbonne. My research will be about these women.”