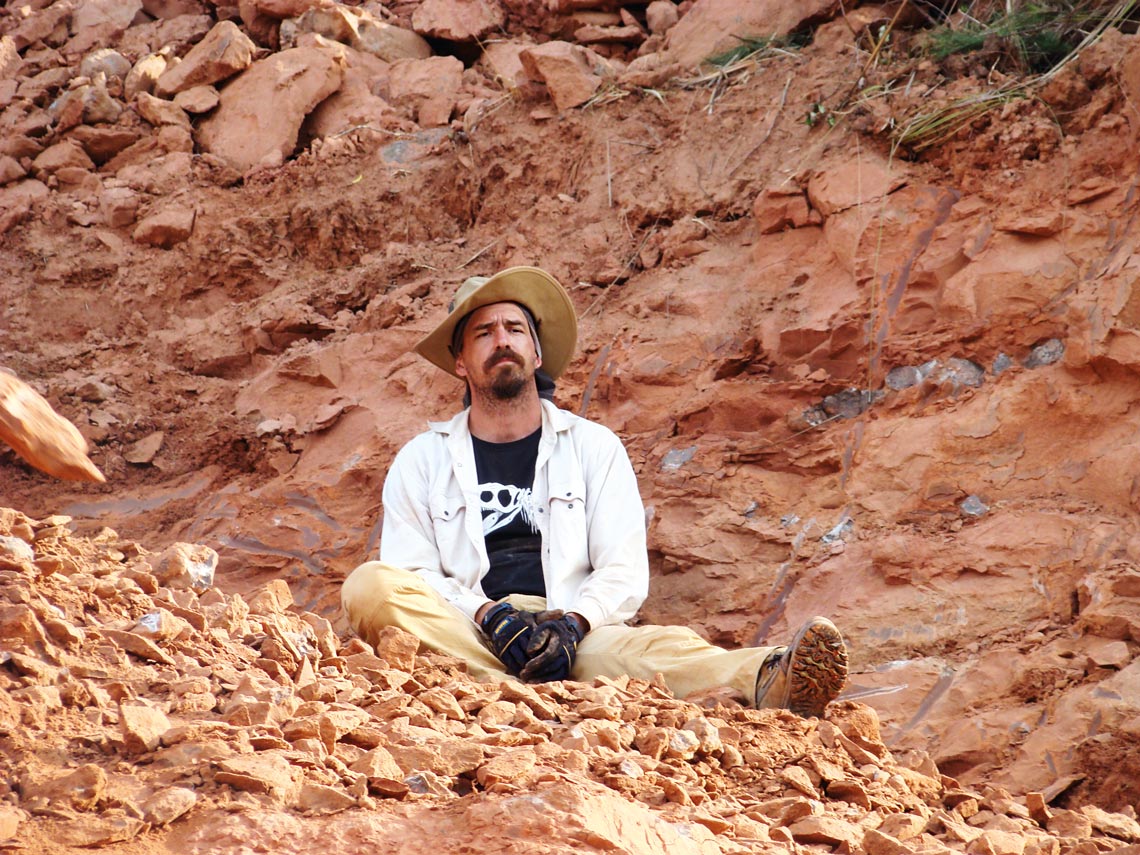 The USP researcher among rocks in the Santa Maria region

Paleontologist Max Langer, from the University of São Paulo (USP), Ribeirão Preto campus, has just returned from a 10-day trip to the province of La Rioja in northwestern Argentina. Together with local researchers and Brazilian colleagues, he conducted field work at important sites in the Ischigualasto Formation, where fossils of some of the oldest dinosaurs in the world have been found, similar in age to those discovered in the Santa Maria Formation in the Brazilian state of Rio Grande do Sul.

Langer, 45, has a deep knowledge of the fossils found in Brazil. He has a master’s degree from the Federal University of Rio Grande do Sul (1996) and a PhD from the University of Bristol in the United Kingdom (2001), and has lost count of how many times he has worked in the central region of Rio Grande do Sul. He was involved in the discovery of two dinosaur fossils found in rocks from the Carnian age (about 230 million years ago) in the Santa Maria Formation. He was also a coauthor of five of the six scientific papers that described these species. In this interview, he talks about the evidence behind the hypothesis that the dinosaurs may have first arisen in South America.

What makes a reptile a dinosaur? What sets it apart from other reptiles of its time?
That is not a simple question to answer. There are different ways of making such a distinction. Nowadays, how we define a dinosaur has more to do with its family tree and the evolutionary history of a species than with the anatomical characteristics typical of dinosaurs, such as the hip socket and legs positioned directly below the body. Modern classifications are based on the concept of clades: groups of organisms that evolved from a common ancestor. Dinosaurs are defined based on the phylogenetic position of three genera classically seen as representatives of their main lineages: the theropod (carnivorous biped) Megalosaurus, the ornithischian Iguanodon, and the saurischian (herbivorous quadruped) Cetiosaurus. We start from these three animals and go through their family trees until we reach a common ancestor. By this definition, all descendants of this common ancestor are considered dinosaurs. That’s why birds, for example, are classified as dinosaurs. They descend from this common ancestor.

How much importance do paleontologists attach to the discussion of where dinosaurs first arose?
This debate is at least partly to do with pride, in being able to say that dinosaurs emerged in your country, or at worst, in your continent or hemisphere. But that’s not all it is. As paleontologists, we study patterns in the diversity and geographic distribution of species over geological history. This is basic science. Dinosaurs are very popular animals that draw a lot of attention, and it is important to understand how the different lineages evolved and spread. Fossils are fragile and they don’t provide complete records. We know that one new discovery could change everything, but based on the evidence we have today, it is most likely that the dinosaurs emerged in Gondwana, the southern half of the supercontinent called Pangea that existed roughly 230 million years ago. To be more precise, they are most likely to have arisen in the west of Gondwana, in what today are the southern regions of South America and Africa. I include Africa because it was united with South America at the time, and we are currently working on describing a dinosaur found in Africa that is about the same age as ours.

Were the ancient dinosaurs found in the Santa Maria and Ischigualasto Formations ever in contact?
Probably, yes. Some of them, such as Chromogisaurus novasi from Argentina and Saturnalia tupiniquim from Brazil, are very similar. There are even some who suggest that they are the same species. There are other animals that lived in both locations too. There are two species of rhynchosaur [a type of herbivorous reptile] in the genus Hyperodapedon whose fossils have been found in both formations: H. mariensis and H. sanjuanensis.

Paleontology in Europe and the USA is more developed than in Brazil. Why have they not yet found any dinosaurs older than those discovered in South America?
Having lots of money isn’t always enough. Almost all of the Upper Triassic rocks in the USA that contain fossil records of tetrapods, a group that includes the modern-day amphibians, reptiles, birds, and mammals, have been dated. Some of the rocks are older than those found in the Santa Maria and Ischigualasto Formations, but they contain no dinosaurs. Of course, it’s possible that dinosaurs were living there at the same time, but none were preserved because they were not as abundant in those regions. That’s one of the hypotheses. Another is that they didn’t exist in North America at that time. In Europe, there are two locations—one in Poland and the other in Scotland—where there are rocks the same age as the Santa Maria and Ischigualasto Formations. But no dinosaurs were found in those either. So for now, I would say the evidence indicates that dinosaurs arose in South America.

Doesn’t the fact that the fossil of a 245-million-year-old reptile has been found in Africa weaken that hypothesis?
It does a little, but it certainly doesn’t disprove it. The Nyasasaurus parringtoni fossil, a possible dinosaur found in Tanzania, is very poorly preserved. Only a few vertebrae and a partial humerus were found. We cannot tell if it’s really a dinosaur. It could be. But from this fossil alone, it is impossible to say that dinosaurs emerged elsewhere and not South America. Refuting the theory that South America was the origin of these animals would require a more complete set of dinosaur fossils from other parts of the world, in rocks of the same age or older than the Santa Maria and Ischigualasto Formations.