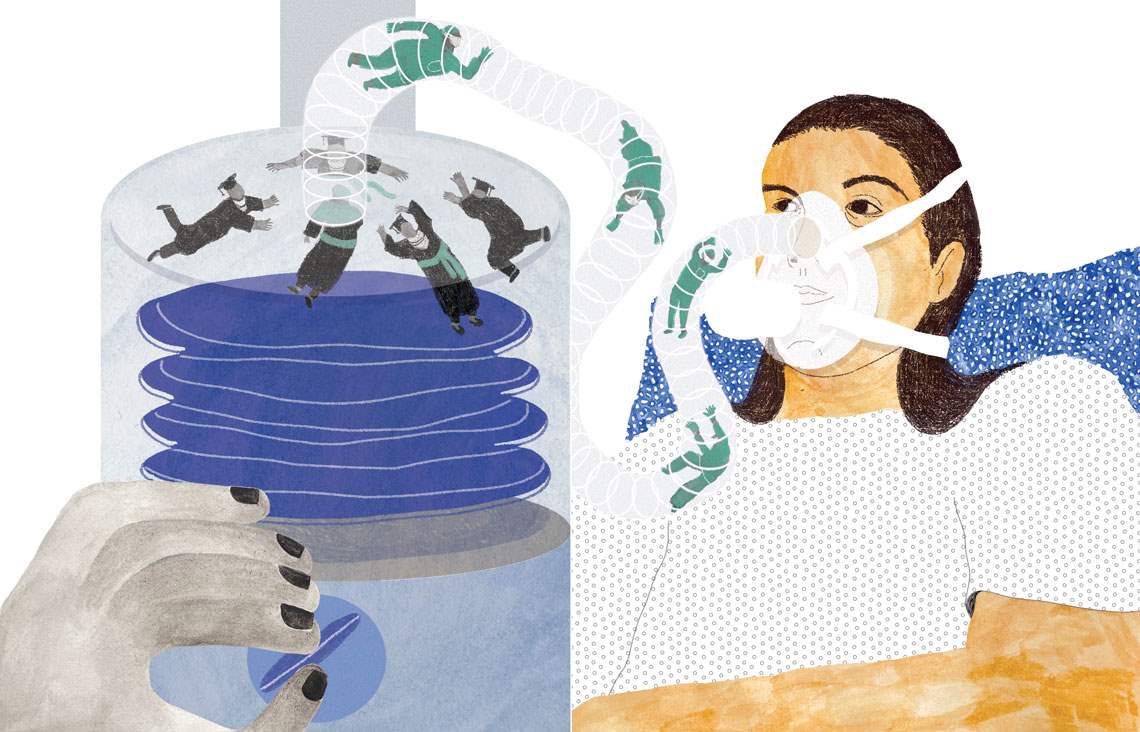 When he began working as a doctor at the Hospital de Clínicas at the University of Campinas (HC-UNICAMP) in early 2021, Matheus Santarosa Cassiano found an environment that barely resembled his undergraduate days at UNICAMP, where he had begun his education six years earlier. The once clearly defined attending areas for the various medical specialties had been reorganized to simultaneously admit more than a hundred patients infected by Covid-19. “While we were able to observe how a hospital structure can be transformed in cases of health crisis, we were also apprehensive about starting to practice our profession in the midst of so much uncertainty,” recalls Cassiano, one of the 113 medical professionals who received their degrees in January 2021.

Today, with a full year of residency in the field of psychiatry, the young doctor considers that he has lived through one of the most challenging realities that healthcare workers can face throughout their careers: the desolate scenario of a pandemic caused by a lethal virus about which little is known. “The emotions were very intense, as we immediately had to begin working in the midst of suffering caused by the loss of so many lives,” he says.

The situation experienced by Cassiano and his colleagues at the UNICAMP School of Medical Sciences (FCM) was similar to that of more than 36,000 doctors who graduated around the country in 2019 and 2020. According to the Federal Council of Medicine (CFM), Brazil has 342 medical schools and an annual average of 10.4 recent graduates for every 100,000 inhabitants. Due to the health emergency, in April 2020 the Ministry of Education authorized early graduation for students who had completed at least 75% of their residency workload, i.e. the practical studies carried out during the final two years of medical school.

Students who were interns during this period also saw their routines transformed by the pandemic. “In March 2020, we decided to suspend in-person activities for fifth- and sixth-year students and began teaching classes online,” explains Cláudio Saddy Rodrigues Coy, associate director of FCM-UNICAMP. Residents, regardless of specialty, were called in to take shifts on the wards and became fundamental in caring for patients with Covid-19. “For residents of clinical practices, such as those working in intensive care, there were practically no changes in their programs, beyond the increase in the number of patients,” says Coy, who closely monitored the impact on the training of students and medical residents, working with the graduation and residency committees to make the adjustments required to confront the pandemic. “However, the surgery residents experienced significant changes in their routines,” he observes. When he was in his fifth year of medical school at FCM-UNICAMP, Zeus Tristão dos Santos joined a group of more than 150 volunteers and became a member of a telehealth service answering questions related to Covid-19. Made up of students in their final years in the university’s medical and nursing programs, the team shared hygiene and prevention measures via telephone and helped those with doubts about the need for in-person medical appointments. “We spent a lot of time denying fake news about ineffective treatments,” recalls Santos, who also worked in-person screening patients with Covid symptoms who came to the university hospital. The future doctor believes, however, that restructuring the hospital has taken a toll on the training of students. “The otorhinolaryngology specialty, for example, which is given in the fourth year, still hasn’t been offered again,” he says.

In an article recently published in the medical journal BMJ Open, Erik Montagna, a researcher at the ABC Central University Medical School and six other collaborators from Brazil and Ireland gathered the impressions of 27 young doctors of both nationalities, who graduated between November 2019 and April 2020. Conducted through individual interviews in an online format, the data obtained in the study relate to the professional socialization of these medical professionals and their entry into the job market during the Covid-19 pandemic. Fourteen Brazilian physicians distributed among the states of Santa Catarina, São Paulo, Ceará, and Paraíba participated in the research. The insecurity of beginning their professional activities amid the pressures caused by the health crisis was one of the main difficulties cited by respondents from both countries.

“One important data point in the research relates to the abrupt decrease in supervision by professors, which contributed to increasing the stress levels of recent graduates,” Montagna says, noting that medicine is a career with a rigid hierarchy, especially during the period of professional training and professional placement. “Rarely do recent graduates or even residents have direct access to their bosses.” In addition to the need to make rapid decisions, many of the interviewees mentioned the difficulty in establishing empathetic relationships with patients because of the attire required to avoid further contagion. “The use of equipment such as masks and face shields made communication through facial expressions practically impossible, in addition to the limitations involved in understanding speech,” Montagna adds.

Although many positions have support programs for professionals undergoing emotional difficulties or psychological distress, many of the interviewees said they “didn’t think it would look good” to resort to the service. “Asking for help is still seen as a sign of weakness in many cases,” says Montagna. “But exhaustion from physical and emotional exertion is inevitable when dealing with death so closely.” The fear of getting sick or transmitting the virus to family members, uncertainty about the consequences for their own training, and the companionship between the various professionals were also mentioned in the reports.

Another recent study involving the practice of medicine during the pandemic describes the experience of health professionals who accompanied patients during their last days of life. The research was published by professors from the Department of Medicine of the Federal University of São Carlos (UFSCar) in the Journal of the Brazilian Medical Association. The study involved five institutions, such as the Federal University of São João del-Rei (UFSJ), UNICAMP, and healthcare centers in Ribeirão Preto and Barretos, in the state of São Paulo. Between July and October 2020, 102 healthcare professionals from several Brazilian states were interviewed. The group comprised 41 doctors, 36 physiotherapists, and 25 nurses. Using online forms, more than 60% of respondents reported feelings of distress and a perceived lower quality of life.

Crises caused by epidemics have always brought challenges to health workers, often demanding sudden changes in their professional lives. “The fight against Covid-19 was, without a doubt, one of the most critical moments since the emergence of AIDS in the 1980s,” says André Mota, from the Department of Preventive Medicine, coordinator of the Historical Museum of the School of Medicine of the University of São Paulo (FM-USP), and editor of Sobre a pandemia: Experiências, tempos e reflexões (About the pandemic: Experiences, time, and reflections) (Hucitec, 2021). “Before that, the generation of health professionals working at the time had already faced outbreaks of diseases such as meningitis, infantile paralysis, leishmaniasis, measles, and schistosomiasis,” Mota adds.

While for more experienced workers the arrival of new epidemics requires restructuring the practices and organization related to hospital care and preventive measures, the crisis also ends up influencing the training of those who are still in their early years of medical school. “I usually organize visits to bring first-year undergraduate students to local Health System Clinics so that they can see up close the adversities faced by workers at the front of healthcare, in this case the realities imposed by the pandemic,” Mota says. 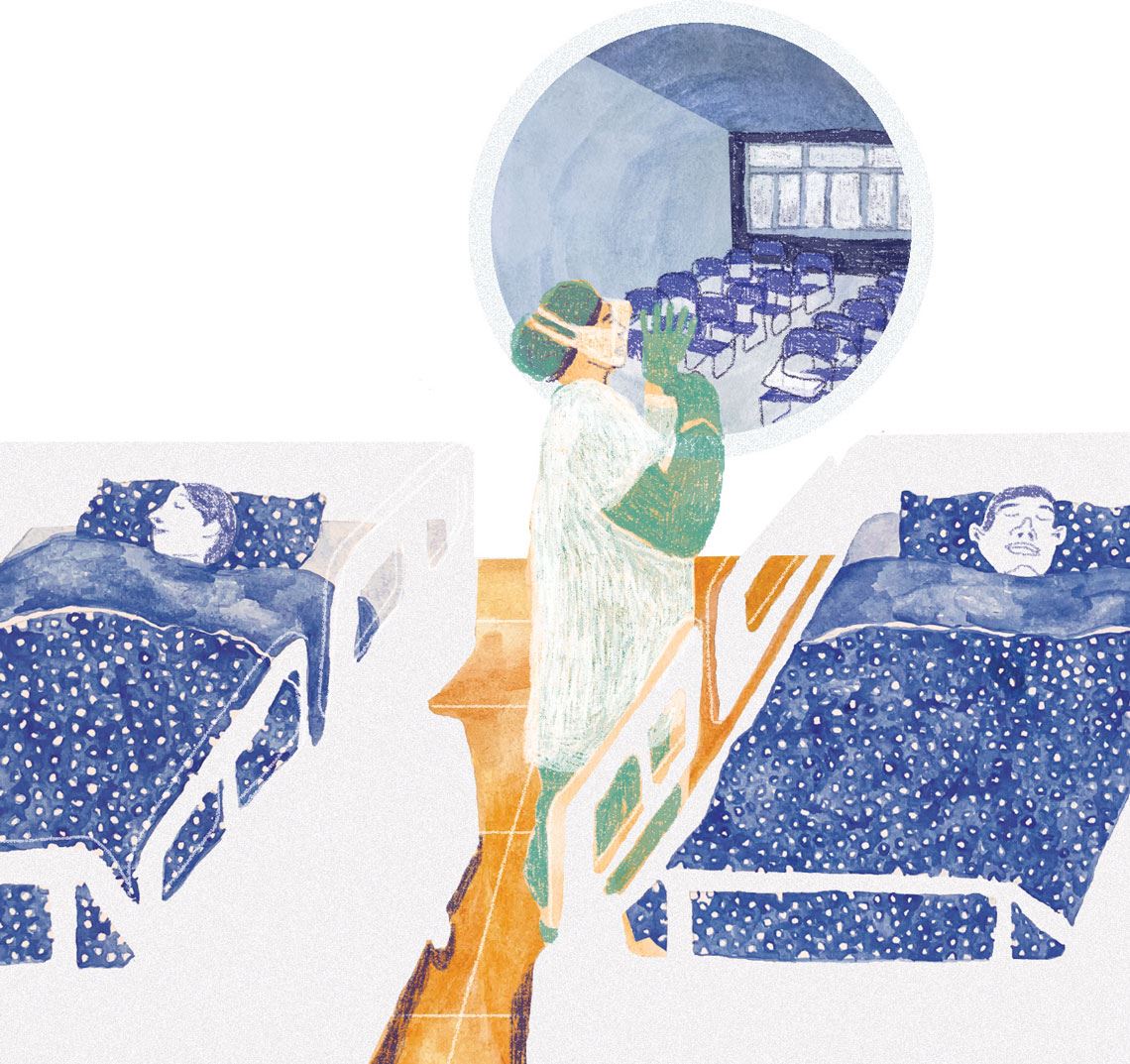 When the new coronavirus arrived in Brazil, the Hospital das Clínicas at FM-USP made available 500 infirmary beds and 300 intensive care units (ICUs), while 6000 employees were mobilized to fight the disease. The restructuring had a large impact on the activities of the approximately 1,700 resident physicians who were then working in the hospital, especially those undergoing training in surgical specialties. “All elective procedures had to be canceled. For many months, only patients in emergency situations were operated on,” says Vera Hermina Kalika Koch, coordinator of the institution’s Medical Residency Commission.

“It is true that we all learned from the pandemic, but this came at the cost of a lot of suffering, since the university hospital was designated as the center for treating severe Covid-19 patients in the city of São Paulo,” stresses Koch. “Living with the high mortality rate of patients with Severe Acute Respiratory Syndrome caused tremendous trauma not only in recent graduates, but also for more experienced professionals.”

With a degree in medicine completed at FM-USP in 2016, Vítor Marcondes Ramos is now a second-year resident in general surgery at HC. “Since the beginning of the pandemic, I’ve been reassigned several times away from my activities as a surgeon to help care for patients with Covid-19,” says Ramos, who at the beginning of 2020 was a tutor for first-year interns. “Until the beginning of the health crisis, my role was to support the learning process—the instructional part—and organize the practical surgery internship for the sixth-year students,” he adds.

Even though aware of the compromises involved in completing his residency schedule and the consequent impact it had on both theoretical content and practical general surgery training, he highlights the learning opportunity brought on by interacting with other hospital teams, something that would rarely occur in the normal course of a surgical residency. In August 2021, Ramos was reassigned to work in the emergency ICU under the supervision of doctor Ludhmila Abrahão Hajjar. “I worked with her for a week and during this period we were able to discuss some very interesting cases and techniques, an experience that I will certainly be able to use in caring for my surgical patients in the future,” he notes. “Situations like this rarely happen when we work only within our own specialties,” he concludes.