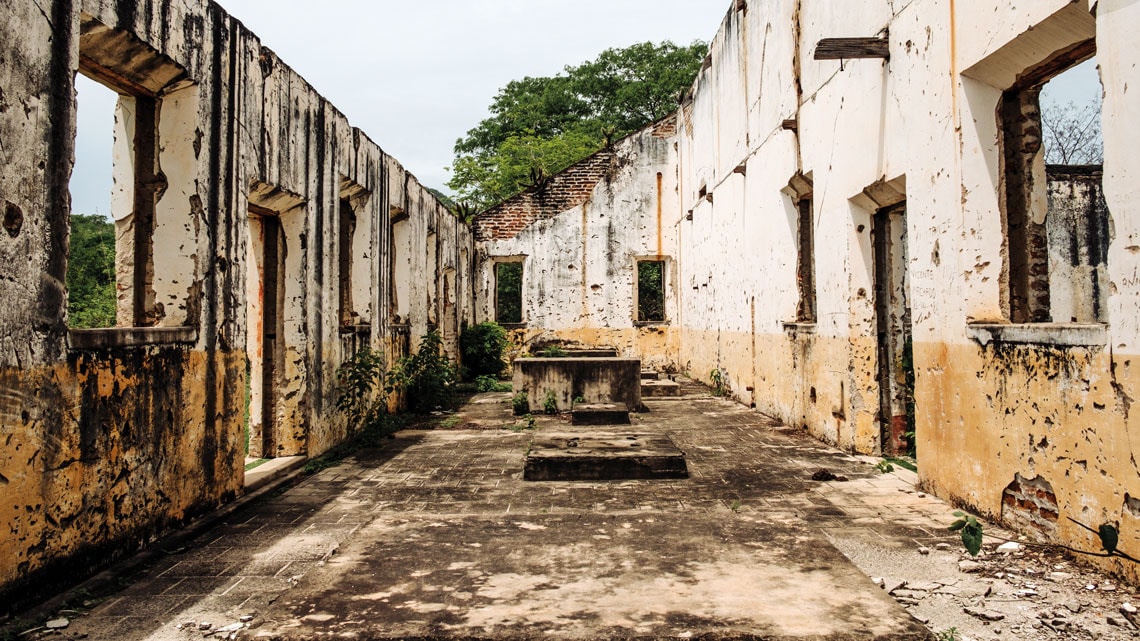 Ruins in Senador Pompeu: some sites held up to 300 people

In the 1930s, seven concentration camps were created in the state of Ceará to hold drought refugees. Patu, the only one whose ruins are still partially preserved and which operated between 1932 and 1933 in the city of Senador Pompeu, about 270 kilometers (km) from Fortaleza, was recently listed as a historical-cultural heritage site by the municipality, and is now undergoing a similar process on a state level. Researchers and members of civil society are pressuring the city to create a plan to preserve the ruins of the site.

The municipal listing was the result of a process started in the 1990s, when academic research on drought began to recover the rural history of the region and social movements began promoting the remembrance of its past. Historian Kênia Sousa Rios, from the Federal University of Ceará (UFC)—author of pioneering research on Patu and six other concentration camps created in the state in the 1930s—explains that the origin of these places dates back to the end of the nineteenth century, when some Fortaleza families became wealthy by cultivating cotton, motivating a burst of urban development. At the same time, between 1877 and 1879, the state experienced a period of intense drought, leading 100,000 retirantes (drought refugees) to migrate to the capital, whose population was about 30,000 at the time. The families of small farms, which included elderly people, adults, and children, made up the majority of migrants, who also came from other states in the northeastern region. “The arrival of these people disrupted the urban development process, and the state began developing strategies to contain the flow of refugees to the capital,” says Rios.

Ronald de Figueiredo, from the Federal Institute of Education, Science and Technology of Ceará (IFCE), Tauá campus, explains that this migration process happened again during the great drought of 1915, leading the government to create the concentration camp of Alagadiço, near Fortaleza, which sheltered up to 8,000 people. “The political discourse of the time claimed that the place was intended to assist the retirantes, when in reality the main goal was to keep them away from the urban center,” he explains. In surveys carried out for official reports by Interventoria do Ceará (Ceará intervention office), published in eight newspapers at the time, such as Gazeta de Notícias, O Povo, and Correio do Ceará, and kept in the Public Documentation Library Archive of the Department of History at UFC, Rios found that it was in 1915 that the state government first used the term “concentration camp” to refer to the containment area for drought refugees.

From 1930 onwards, the growth of Fortaleza intensified, recalls the historian, demanding modernization and urban remodeling efforts. At the same time, the expansion movement began attracting more and more residents from other regions of the state, in search of better living conditions. “There was a desire for modernity among the elite in the capital, and they began pressuring the government to create mechanisms to control the circulation of the poor, who begged in the streets and were seen as potential looters or carriers of diseases,” she reports. 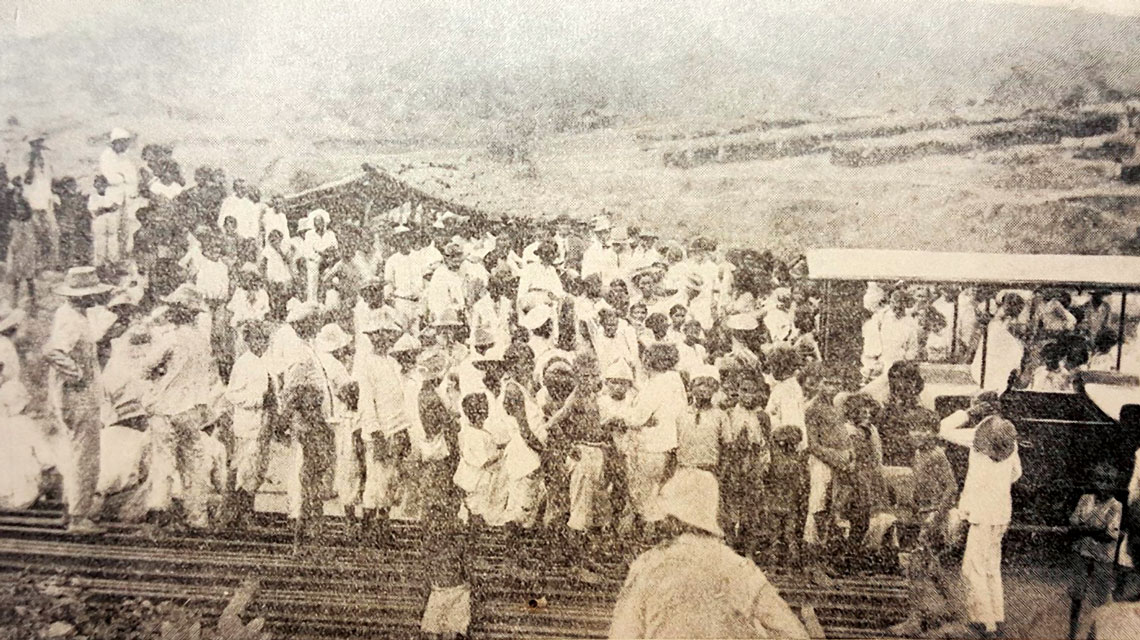 As the 1915 Alagadiço building was not big enough to contain the large numbers of people migrating to the capital, when the next great drought happened in 1932, the state government decided to establish seven other concentration camps. “That was when pressure from the wealthy resulted in public policy,” adds the historian. The project was developed by the state government in conjunction with the Ministry of Traffic and Public Works from the Getúlio Vargas (1882–1954) administration and provided for the creation of refugee confinement areas. “They were watched at all times and were not allowed to leave except to go to their jobs in public works or mills in the region. In return, they received one daily meal,” shares Rios.

Figueiredo, from IFCE, explains that six of the camps were built close to Baturité railway stations, which were used by the refugees to reach the capital. The first stretch of the railway line opened in 1872, operating for passenger transport until the mid-1980s. Only one camp was not close to the railway. Five of them were in rural areas of the state, while two smaller ones were on the outskirts of Fortaleza. In the press, the government portrayed the camps as part of a social welfare and protection policy, and retirantes came to them spontaneously, deluded by the promise of food, medical care, and lodging. “When they arrived, they realized that the structures were precarious. The buildings that housed people were large sheds made of straw,” shares the UFC professor.

According to Rios, the concentration camps were designed to house 3,000 people, but some had up to 18,000—as was the case with Patu. “Patu is the only one whose ruins are still standing, and that is why it has become the most well-known,” explains the historian. The Senador Pompeu camp had a masonry structure as they were able to take advantage of 12 large neocolonial-style houses originally built to support construction work of the Patu River dam in 1919.

In 1932, the buildings that belonged to the National Department of Works Against Drought (DNOCS), at the time called the Federal Inspectorate of Works Against Drought (IFOCS), were conceded by the federal government so that the state government could set up the camp. It is estimated that some of these 12 houses held around 300 people. The refugees were also housed in tents spread over the land. Although there are no official records, it is estimated that half the people who were held in Patu died of hunger or due to diseases, such as typhus and measles, and were buried in mass graves. “Parish registers from some churches in the region include reports from priests who visited the camps, describing that they would provide last rites for dozens of people every day,” adds Rios. This information was corroborated in interviews with survivors, conducted by Rios. The seven camps were operational until 1933, when there was rain again and the retirantes returned to their places of origin—their train tickets paid for by the government. “Some of these people went to Fortaleza, which experienced an increase in its slum-growth rates,” reports Rios, estimating that over 100,000 people were held in the Ceará concentration camps between 1932 and 1933.

Djamiro Ferreira Acipreste, from the Law Department of the Regional University of Cariri (URCA), recalls that the spectrum of World War II, which “formulated a new civilizing and humanitarian pact and strongly condemned the concentration and extermination camps of the holocaust,” was key in the disappearance of documents related to the Ceará camps. Instead, the government started building housing developments on the outskirts of Fortaleza. In 1959, with the creation of the Superintendency of Northeast Development (SUDENE), discussions began on how to handle drought through irrigation policies and weir projects. “From 1945 onward, concentration camps began to be forgotten,” claims Acipreste. “Today, many of the locals are unaware of their history.” 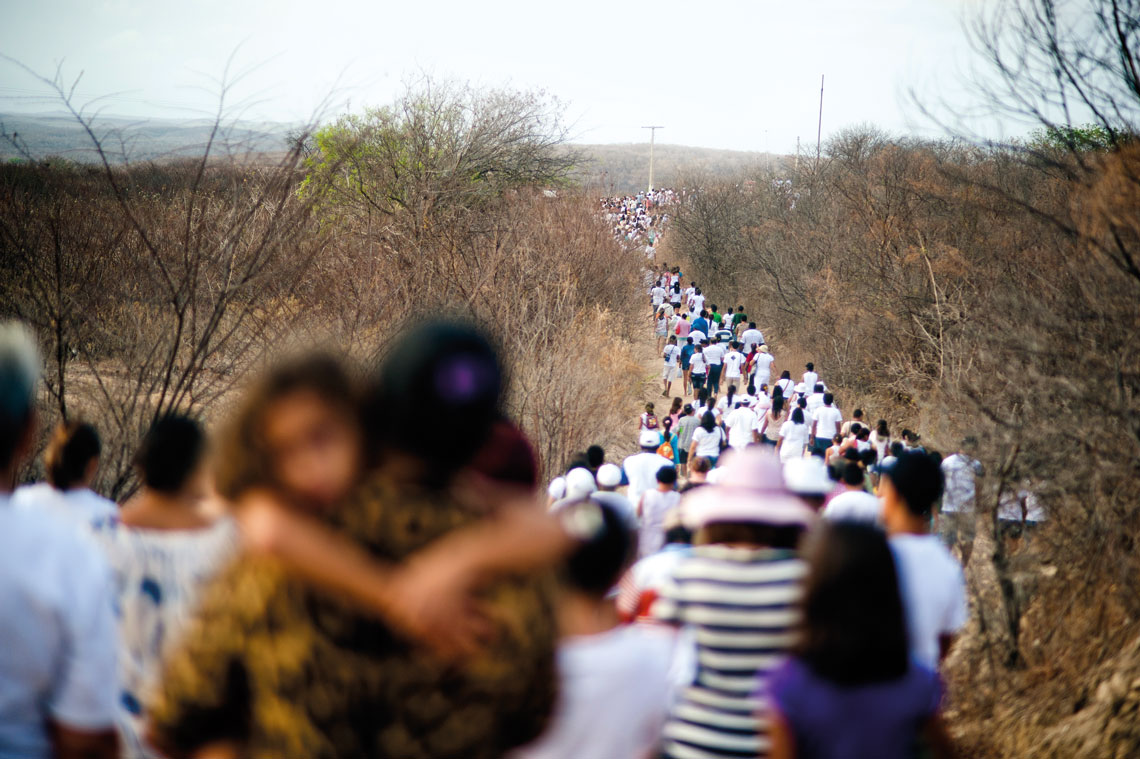 In 2014, a pilgrimage in Senador Pompeu paid homage to those who died at the concentration campIsadora Brant / Folhapress

This was the case for Figueiredo, from IFCE, a resident of the city of Crato, where Buriti, the largest concentration camp in the region, housed 70,000 people from states such as Piauí, Bahia, Pernambuco, Rio Grande do Norte, and Paraíba. Figueiredo states that the Crato region has attracted migrants from other areas since the end of the nineteenth century. “It is close to the border with other states, has many springs, and is known for being the oasis of the Cariri region,” he explains. In addition, the pilgrimages of Padre Cícero (1844–1934), born in the city, also attracted migrants.

Until 2005, when he began his undergraduate at URCA, he was ignorant of the local history. It was only through reading the works of authors, such as Kênia Rios and Frederico de Castro Neves, the latter also a professor at UFC, that he became aware of it. “There is no material evidence of the existence of this camp. The neighborhood that used to be called Buriti changed its name to Muriti, in an attempt to erase the episode from memory. I have lived there all my life and only learned about its existence in college,” reports Figueiredo, who defended a master’s dissertation on the subject in 2015.

Popular devotion
Born in Senador Pompeu, lawyer Valdecy Alves, one of the main leaders of the social movement that, along with historians, gave rise to the process of listing the camp, recalls that as a child, he and other children believed Patu to be haunted, while adults went to the site to fulfill religious promises. “Because they did not have the masonry structures that Patu had, the other camps used tents made of wood, roofed with Carnauba palm leaves. After they were closed, the government set fire to them, and the structures disappeared,” Alves shares. In Senador Pompeu, part of the older population remembered the events and would make pilgrimages to the place where the dead had been buried in order to fulfill religious promises. Historian Aterlane Martins, a professor at IFCE, Quixadá campus, states that because of this, in 1982 the Italian priest Albino Donatti proposed a pilgrimage in memory of the dead. The resulting walk, called “Caminhada da seca” (Walk for the drought), always takes place in November. It starts at the city center along a 4 km route, to the place where the mass graves are supposedly located. Formerly an empty area, today this place has a symbolic, cemetery-like structure. “Devotees have placed tombstones there, and they take flowers, candles, bread, and water on their walks,” shares Martins. He claims the visitors believe the dead can grant wishes to devotees.

Historian Karoline Queiroz e Silva, who defended a master’s dissertation about the camp in 2017, explains that, before the priest organized the walk, people claimed they saw souls in the area and started lighting candles and taking votive offerings (objects usually offered by the faithful to saints to whom they are devoted). She reports that about 6,000 people participate in the pilgrimage every year, including from out of state. “Recently, in addition to the religious items, people started to carry small cisterns and seeds, alluding to the need for public policies that make it possible to live with drought. With that, the event became political,” she points out.

Martins, from IFCE, shares that the city government began including the pilgrimage in its tourist attractions 10 years ago, adding signs to the locations along its path. In addition to the walk, he defends that cultural activities be held in the protected area, in order to keep the concentration camp memories alive. “The listing process is important, but there is no plan yet to determine, for example, how the buildings will be used. They are far from the city center and there is no daily activity in the area. It is necessary to tell the story of what happened there out of respect for those who experienced it,” he concludes.