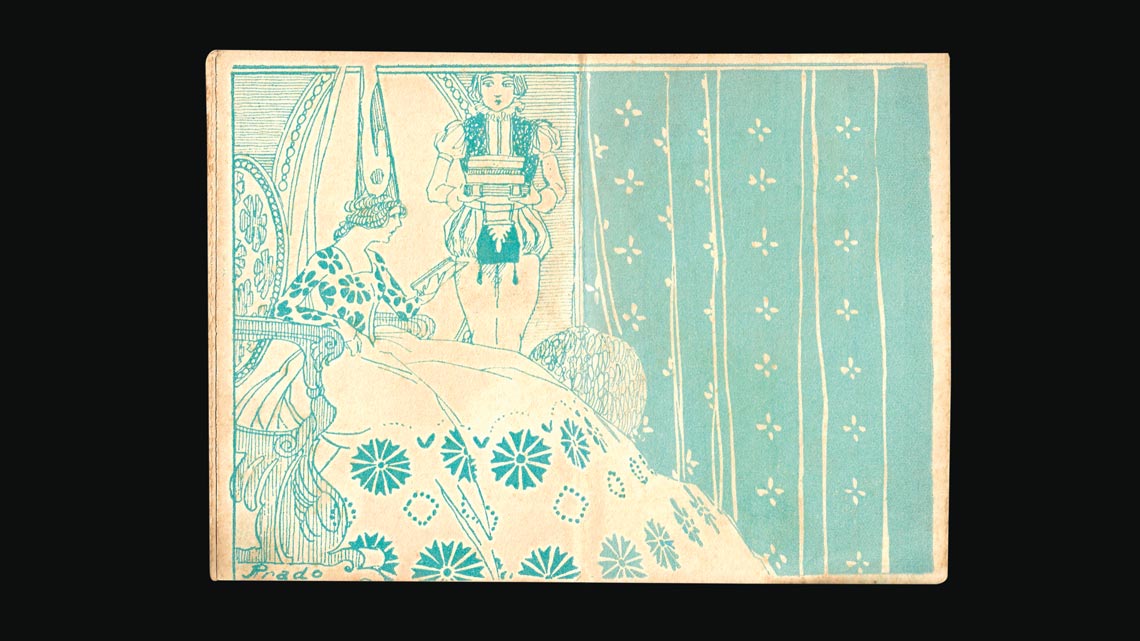 Revolutionary. This is how Monteiro Lobato (1882–1948), at around 60 years of age, and already considered the most important Brazilian author of children’s literature, referred immodestly to his own role as editor between 1918 and 1927. Though self-bestowed, the adjective caught on: it was repeated many times, including by his main biographer, Edgard Cavalheiro, author of Monteiro Lobato: Vida e obra (Monteiro Lobato: Life and Work; 1955), the first to reconstruct in detail his editorial activity. Now, based on hitherto unpublished documents, this aspect of his image returns to the center of the debate. “All the sources that present him as a publisher with great capacity for innovation were based on Lobato’s own comments about himself,” says Cilza Bignotto, professor of literary theory and Brazilian literature at the Federal University of Ouro Preto (UFOP). In her book Figuras de autor, figuras de editor (Writer figures, editor figures; UNESP, 2018), she revisits Lobato’s entrepreneurial history and analyzes the extent to which it was transformative.

“Lobato should indeed be celebrated as one of the great Brazilian publishers, as someone who innovated many of the practices then in existence,” says the researcher. One of his achievements, according to Bignotto, was establishing a distribution network that would transform the country’s publishing market. Lobato—who in the early 1920s was able to distribute his books to all of Brazil, including to the then-called Acre territory—gave himself credit for creating this network through what he called, in an interview with Leitura magazine in 1943, a “revolutionary resolution:” sending letters to acquaintances of his and mayors in other cities requesting recommendations of merchants who could display books in their establishments and would agree to sell them on consignment. As editor, Lobato promised them “a great deal,” and he made no distinction among booksellers, butchers, and other traders. He claimed to have secured more than a thousand outlets in this way, thus overcoming the difficulty of getting his books to the people interested in reading them.

The episode has been covered by biographers and other researchers, who mention the importance of this correspondence—whose whereabouts remain unknown—to the fate of the Brazilian publishing market. “The letters comprise a document that no one has ever found,” shares Bignotto, who has been dedicated to studying Lobato since the 1990s, and is one of the creators of the Monteiro Lobato Fund at the Alexandre Eulálio Documentation Center, at the University of Campinas (CEDAE-UNICAMP). Bignotto demonstrates how the selling of books grew from an existing structure, which was expanded by Lobato mainly through his contact with men in the area of languages and literature, and by using Revista do Brasil, a magazine where he served as editor between 1918 and 1925, as a foundation. Writers from different regions of the country sold subscriptions to the publication, thus ensuring the circulation of a vehicle that could eventually feature their own work. Lobato, on the other hand, “would favor the publication of articles whose authors helped him sell the magazine,” explains the researcher. When Revista do Brasil went from being simply the title of the periodical to becoming the name of a publishing house, it was through these men that the books spread throughout the country.

In order to reconstruct the writer’s editorial activity, legally organized into five companies throughout the nine years of the venture, Bignotto made use not only of letters and testimonials published in newspapers, but also of the bankruptcy lawsuit of the Companhia Graphico-Editora Monteiro Lobato, which took place between 1925 and 1927 and had not yet been fully explored by researchers. She analyzed print run data, copyright payments, documents regarding author contracts, government sales records, and day-to-day details of the production process. From contracts and his correspondence with other authors about the state of publishing, he emerged as a professional committed to distributing works, accountability, and payment of copyright royalties. 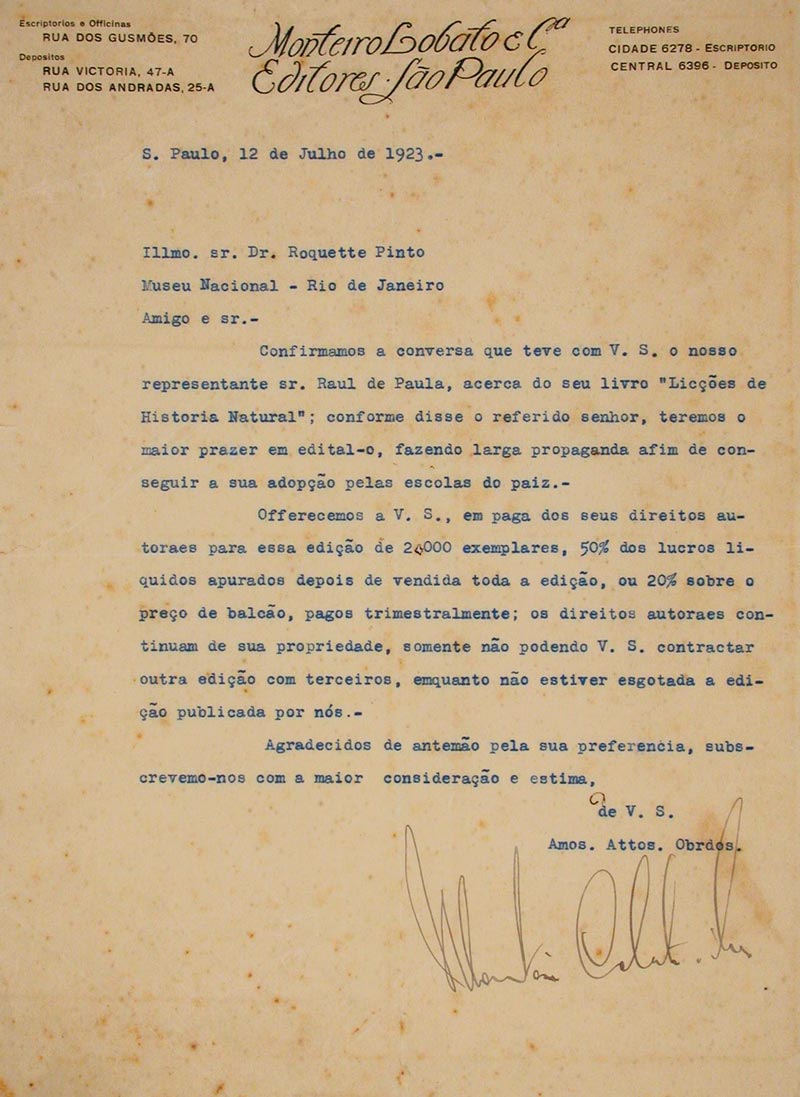 Lobato’s commercial role was celebrated in the writings of the time, extolled as a “great book-selling machine;” he was called “the father of books for the masses.” He is still recognized as a precursor in Brazilian editorial history, having updated its practices, says Bignotto. “But it is foolhardy to call him ‘revolutionary,’” explains the researcher, “because that makes it seem as if no publishers before him ever made similar efforts.” The first part of Figuras de autor, figuras de editor highlights some of these publishers and their similarities to Lobato—such as Francisco de Paula Brito (1809–1861), who attempted to establish a national distribution network, and the French-born Baptiste-Louis Garnier (1823–1893), who encouraged the professionalization of writers. The book reconstructs Brazil’s publishing history starting with the establishment of the Royal Press by the royal family in 1808, until the early twentieth century, when Lobato’s generation initiated the modernization of Brazil’s publishing industry.

“Lobato is an exceptional individual, but not unique. He is part of a modernization process where he perhaps, at that time, was at the top as he invested in the publishing market in a way many others did not,” claims sociologist Enio Passiani, a professor at the Federal University of Rio Grande do Sul (UFRGS) and author of Na trilha do Jeca: Monteiro Lobato, o público leitor e a formação do campo (On the Trail of Jeca: Monteiro Lobato, the Reading Public and the Forming of the Field; EDUSC, 2003). Passiani credits the myth of Lobato as a “founding hero of national publishing companies,” in part to the writer’s ability to self-promote, but he also highlights the great prestige Lobato enjoyed in the early 1920s: “Lobato was a successful publisher because he was a successful author. His editorial practice took advantage of the entire network and influence he had gained as one of the most important writers of that time.”

Lobato’s editorial work—which began in 1918 with the publication of his work O Saci Pererê: Resultado de um inquérito (Saci Pererê: The result of an inquiry) and concluded in 1927, when he took the position of Commercial Attaché at the Brazilian Consulate in New York—was marked by setbacks. “He tried to achieve success his whole life, and it often blew up in his face. Lobato was often unlucky in life,” shares Marisa Lajolo, a professor at UNICAMP and Mackenzie Presbyterian University and a coordinator of the research project “Monteiro Lobato (1882–1948) e outros modernismos brasileiros” (Monteiro Lobato (1882–1948) and other Brazilian modernisms).

This is especially true of the Companhia Graphico-Editora Monteiro Lobato, which was established by Lobato when he imported machines and set up a printing house as a result of his concern about ensuring the graphic quality of published works. It was not long before changes in the country’s economic policy led to a substantial increase in his debt and a crisis that would ultimately lead to bankruptcy. His activities were also affected by the production difficulties caused by the Lieutenants’ Revolution in São Paulo in 1924, the drought that occurred the following year, which disrupted the city’s electricity supply, and the government boycott of the publisher’s catalog after Lobato publicly criticized measures taken by President Artur Bernardes (1922–1926). 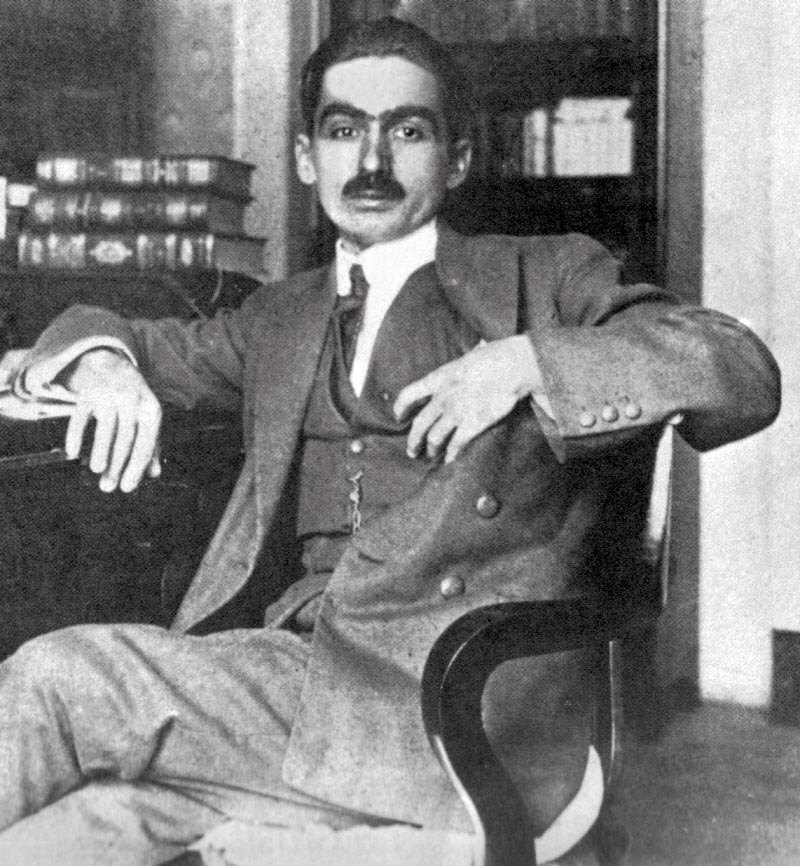 He would remain active as editor until 1929, thanks to the founding of Companhia Editora Nacional, which would become—in the hands of his partner Octalles Marcondes Ferreira (1900–1973)—the largest publishing house in the country between the 1940s and 1970s. Although his partner was the one responsible for the business side, it was Lobato who filed for bankruptcy, during Ferreira’s absence. In later testimonies, Ferreira would claim that the situation could have been circumvented without the need for such drastic measures.

“Lobato lacked business acumen but, in many ways, he had a feel for the market,” Passiani notes. According to its own ranking, in 1920 Monteiro Lobato & Cia. occupied sixth place in terms of works in circulation, with 56,000 copies sold; 28 of the 48 works released in the country between 1920 and 1922 were published by the company. Practices adopted by Lobato are still in use today, such as using color on the covers (something hitherto used mainly in low-value literature), publishing new authors, betting on popular novels, and selling to the government—always aiming at keeping the business afloat. “Cases like that of Narizinho arrebitado [Stuck up], the school version of Lobato’s own A menina do narizinho arrebitado [The stuck up girl], adopted in schools in the state of São Paulo, helped support his editorial activity,” explains designer Didier Dias de Moraes, who developed a research paper at the School of Architecture and Urbanism at the University of São Paulo on the design of the textbooks by Companhia Editora Nacional (1926–1980).

Lobato’s market vision also resulted in the publications that changed children’s literature in Brazil. At a time when the only books available to children were those that favored moral and civic education and translated foreign works, Lobato saw a gap in the market. “The publishing market did not offer the kind of book he would like to read to a child,” explains Bignotto, “so he decided to write it.” From the first edition of A menina do narizinho arrebitado, from 1920, to the bankruptcy process, Monteiro Lobato & Cia. published eight titles written by Lobato himself––along with many works, accumulating almost 200 editions until Lobato’s death, according to a survey conducted by the project coordinated by Lajolo.

Sales was not his only goal as a writer, however. “He was a great author, with a well-defined, attractive project which, among other things, sought to value national culture,” says Bignotto, citing the essentially Brazilian nature of his narratives involving life at the Sítio do Pica-Pau Amarelo (Yellow Woodpecker Ranch). Jorge Coli, art historian and professor at UNICAMP, believes “his children’s books are a powerful instrument for children’s critical thinking. He arms them to deal with any statement they may disagree with—even from the author himself. It teaches them to distrust any statement that is too final, makes them analyze it.” It is worth noting that, at the time, the works available focused on prescribing behaviors to children.

As editor of Monteiro Lobato livro a livro: Obra infantil (Monteiro Lobato book by book: Children’s books; UNESP, 2008), Lajolo states that Lobato created literature that was irreverent, based on using the imagination, and which presented a critical view of Brazilian society. The researcher also emphasizes “the precocity” with which Lobato realized “the gigantic importance of the children’s books market:” “In addition to exploring certain content, he is also a precursor to the professionalization of this type of literature,” Lajolo adds. Today’s writers who make their living from books for children and young adults owe it to Lobato’s work, she argues. In this sense, he really was revolutionary.