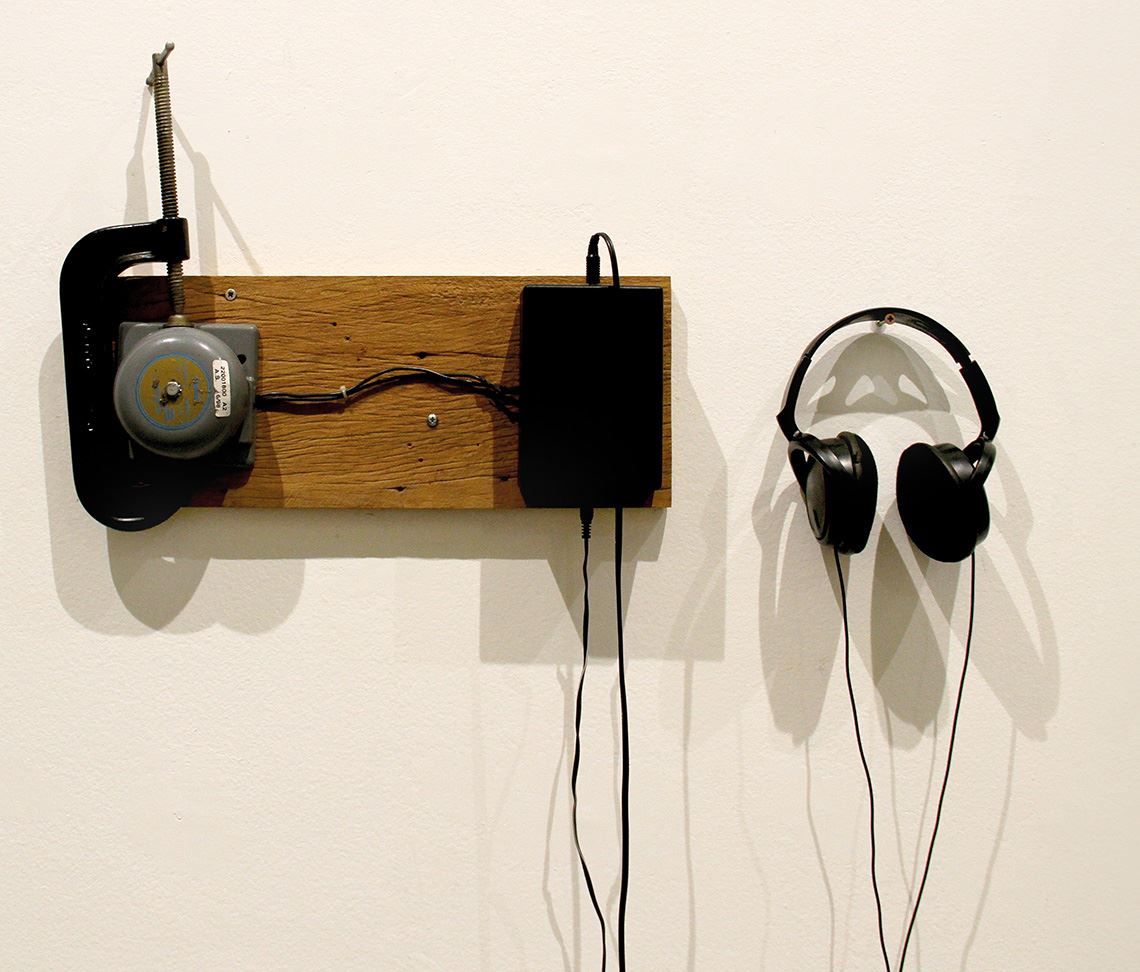 Realidade Virtual, one of the works presented at the Sons de Silício exhibition held in 2019 by the NuSom-USP group

Histories of classical music tend to focus exclusively on European composers, such as Johann Sebastian Bach (1685–1750) and Ludwig van Beethoven (1770–1827), and American musicians like Walter Piston (1894–1976). In experimental music, which originated in the early 20th century, it’s no different. Names like John Cage (1912–1992), from the United States, and Pierre Schaeffer (1910–1995), from France, stand out as international exemplars of the genre, which is marked by improvisation and the use of noise resulting from manipulating objects or electronic devices. Attempting to fill a bibliographic gap regarding Latin American works dedicated to sound art, researchers from the Sonology Research Center at the University of São Paulo (NuSom-USP) published a book in December that discusses the specificities of this artistic practice in Brazil, shedding light on figures who have been left out of the European and North American canon. “Representation of Latin American countries in the history of music and in the study of sound is profoundly lacking,” says Fernando Iazzetta, a researcher at NuSom and one of the editors of Making It Heard: A History of Brazilian Sound Art (Bloomsbury, 2019).

Issued in English by a British publisher with the goal of increasing the visibility of Brazilian sound art production, the work brings together essays by 13 authors that discuss new areas of experimentation such as sonology, which studies sound production and musical processes, and considers technological resources such as computers and synthesizers. “Thanks to equipment created in the labs of French and German sound engineers in the mid-twentieth century, it became possible to give new directions to the way music is produced and experimented with,” says Iazzetta. In the case of Brazil, experimental music took root in the 1950s with the rise of the Música Nova group, led by composers from São Paulo such as Rogério Duprat (1932–2006), Júlio Medaglia, and Gilberto Mendes (1922–2016), who were inspired by the cosmopolitan ideals of the Concretist movement; and, in the 1960s, with Tropicalismo, which sought to connect new international trends with Brazilian popular music.

According to Iazzetta, the desire to mirror the production of other parts of the world was a recurring theme, although it was possible to detect a certain local accent in these movements. Arrangements by Duprat, for example, mixed the sounds of berimbau, electric guitar, and electroacoustic noises. “The tension between the local and the global is a central factor in understanding recent Brazilian sound art production,” says the researcher, who is a professor at the School of Communications and Arts (ECA-USP). After a period when access to cutting-edge technology was difficult due to economic restrictions and the lack of a robust electronic industry in Brazil, the twenty-first century began with cultural policies that stimulated the digital arts, including sound. “Large telecommunications companies and banks also began to support exhibitions and artistic residencies linked to the use of sophisticated technologies and digital media as a way of associating their brands with the contemporary,” explains Iazzetta. 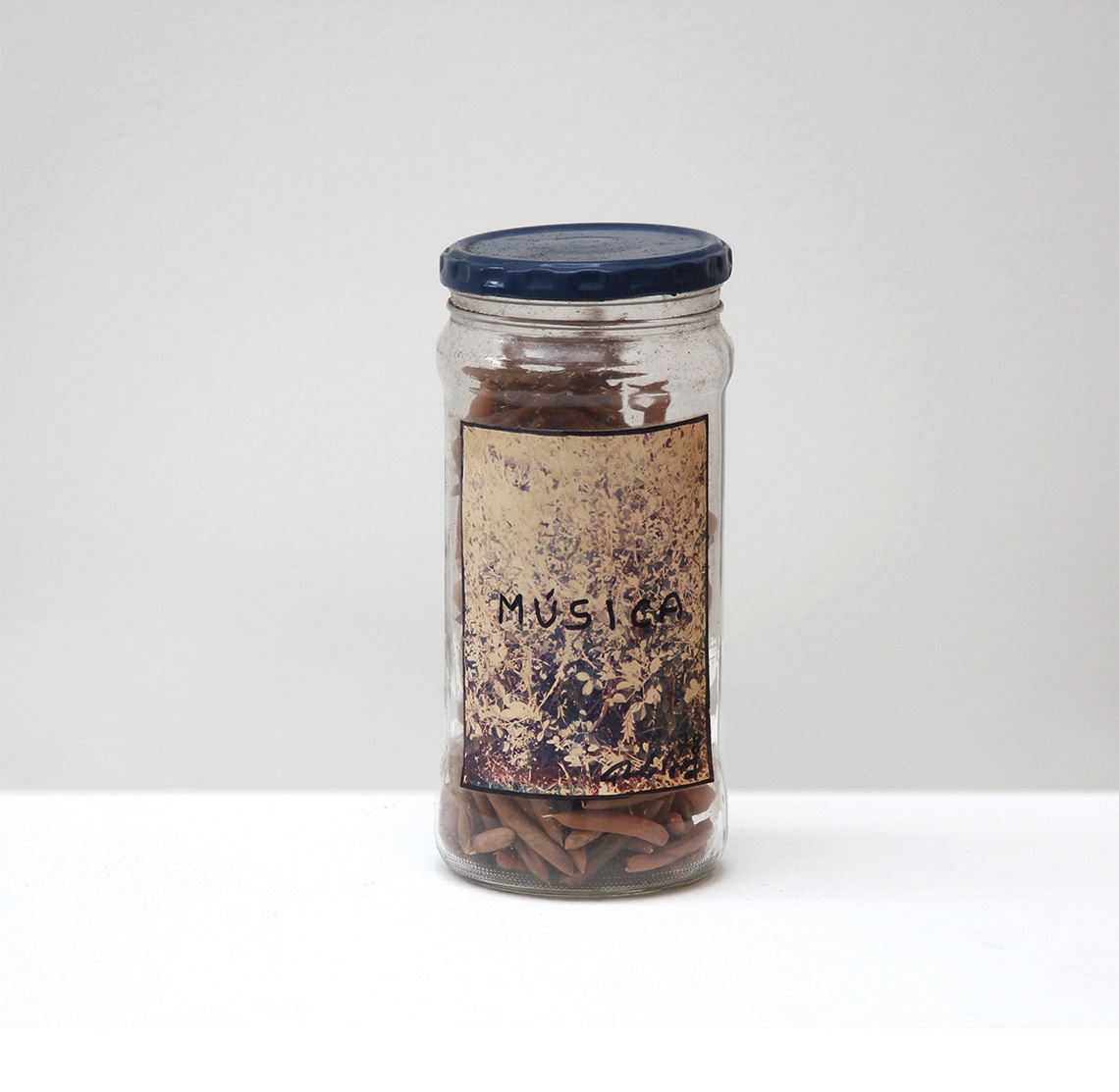 Seeds inside a glass jar sitting on a surface comprise the work Música (1978), by artist Paulo BrusckyPaulo Bruscky

This is how over the last 20 years sound art emerged in Brazil, causing a transformation in the musical language and breaking with the traditional stage/audience relationship by moving increasingly toward installations in art galleries. In this context the challenge was to investigate the characteristics of this sound production, explains Portuguese artist and researcher Rui Chaves, the book’s coeditor. “There was no information about who the Brazilian artists are, or how, where, and what they work with,” says Chaves, who created the online platform Nendú (meaning “hear yourself” in Tupi-Guarani), with data from more than 100 Brazilian artists, during his postdoctoral internship concluded in 2018 at NuSom (see www.nendu.net).

Launched last year, the portal presents interviews, photos, videos, and a map that indicates where the artists work, most of whom are in São Paulo. The idea is to update Nendú again this year, serving as a database for researchers. “A resource like the International Sound Art Archive lists hundreds of sound artists around the world, most of them from England, Germany, and the United States,” says Chaves. “This international platform has been inactive since 2010. But consider that there was only one artist from Brazil listed among a group of 257; it’s safe to say that there was a lot more than just one person working in this genre before 2010 in Brazil.”

The archive created by Chaves helps to outline a more comprehensive and diverse panorama of the country’s sound art, Iazzetta notes. “We didn’t have a broad sense of the significance of the nation’s sound art production, in terms of quantity and quality.”

Among the peculiarities of Brazilian experimental music is its frequent convergence with the concept of gambiarra—a popular expression that describes an improvised and informal way of solving everyday problems when adequate tools or resources are not available. Musician and researcher Giuliano Obici, a professor at Fluminense Federal University (UFF) and one of the authors of Making It Heard, observes that during the last decades the term has been used to describe certain modes of artistic production in Brazil, characterized by their improvised method of working with materials and technological devices. 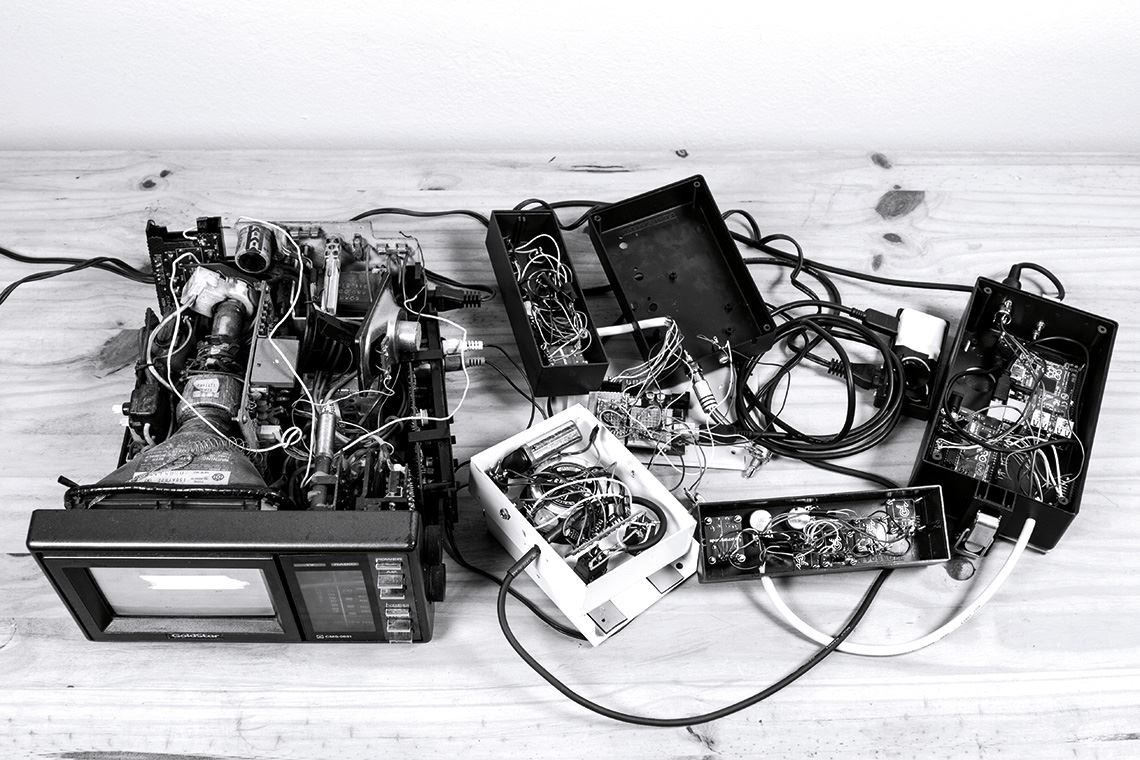 Electronic Junk
For musician André Damião, old televisions, record players, and other devices found at electronic waste disposal sites are part of the normal routine of many Brazilian artists. He says it’s about reusing used materials found in places like Rua Santa Ifigênia and its traditional electronic equipment stores, in São Paulo. “This is a clear example of how socioeconomic reality is reflected in artistic work. The objects used in a work reveal a lot about the procedures and discourses adopted by the artist within an economic scenario that’s distinct from the United States and European countries,” says Damião. He stresses that although Brazilian artists now also have access to the software and equipment used in developed nations, the relationship established with technology depends on the local context into which it is introduced.

In one of his works, titled Narva, Damião criticizes the commercial processes that make mobile devices obsolete, in this case a portable television from the 1980s found in the trash, which after some tinkering turned into an unusual and noisy musical instrument. “It’s a way of criticizing merchandise, thinking about objects beyond what was planned for them and reflecting on what kind of music can be created using these devices, which are deemed to be obsolete,” he observes. 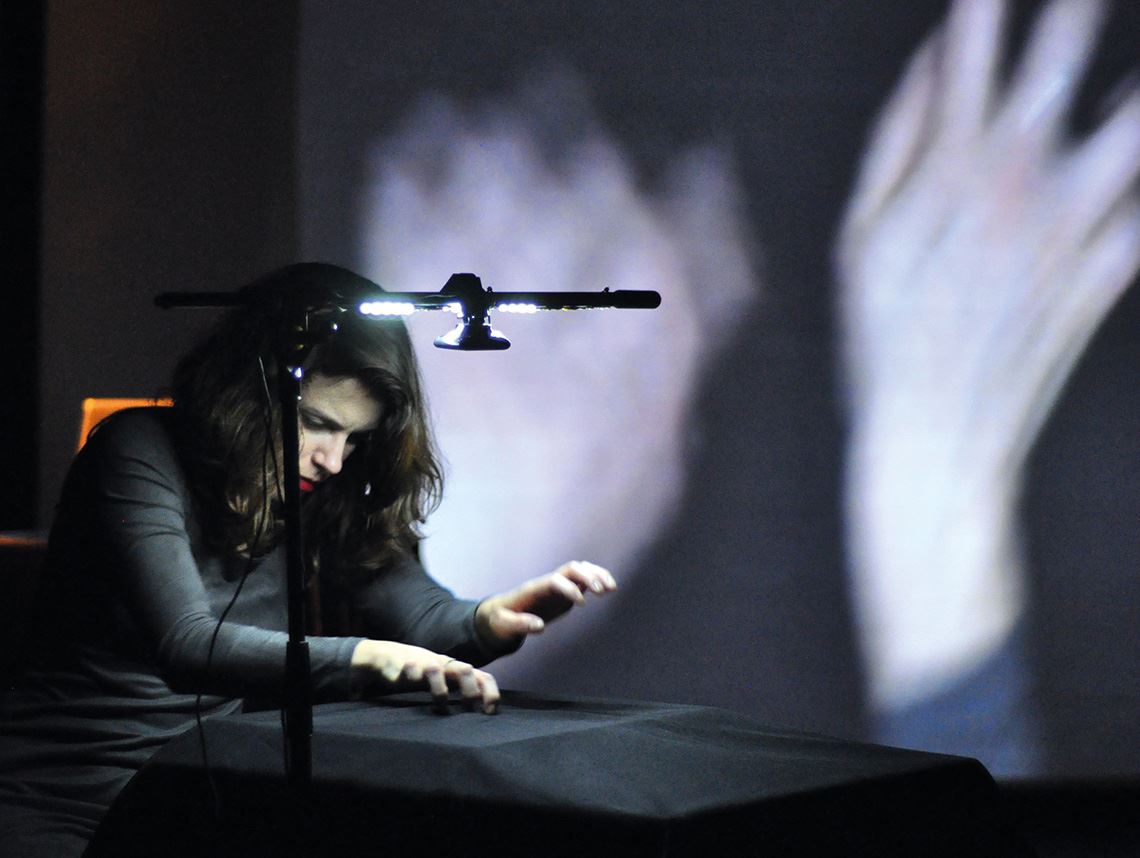 Unknowns
Cataloging sound artists is not an easy task, because they don’t always define themselves as such, says artist Lílian Campesato, a researcher at NuSom. “Sound can appear as a fundamental element in works created by musicians, visual artists, and artists who aren’t directly connected to sound art,” she notes. This is evident, for example, when one is introduced to the collections of Berro, a digital recording label launched by NuSom in 2019. Three albums with 26 sound works created since 1968 are available on the Bandcamp digital platform. Some of the pieces were produced by Rio de Janeiro visual artist Cildo Meireles, famous for his sculptures and installations, who released an LP record in 1970 with sounds generated by a frequency oscillator. “For Cildo, this is music,” Campesato points out.

In addition to works of historical value such as that of Cildo Meireles or references to productions of a more experimental nature, the three albums released by the Berro label show that experiments with new sounds appear in a variety of artistic works, including in the field of popular music. Artists such as Hermeto Pascoal, from Alagoas, are known for their creative use of unusual sounds, and their songs often resist the restrictive boundaries of genres and labels. For musician Itiberê Zwarg, bassist in Pascoal’s band, the most important thing is not to establish definitions, but rather to identify artists capable of creativity driven by intuition. “When a musician is creating, he senses things that are out of the ordinary, and that is creativity,” he says. A good example is the song “Canto II,” by Juçara Marçal and Cadu Tenório, which appears on Make It Heard, Volume 2 released by Berro. The piece features an unconventional arrangement and a theme based on a traditional Bantu song. This association of experimentalism with popular music is the subject of journalist and researcher GG Albuquerque’s chapter in the book Making It Heard.

For Campesato, however, the distinctions between the fields of music and sound art often reflect the political demarcation between artistic niches more than actual differences between these practices. “Talking about sound art within academia is not trivial, and still causes discomfort in many university music departments,” says the artist, who analyzes the sound works of Brazilian women in one of the book’s chapters. “Upon completing my master’s degree in sound art at USP in 2007, I realized that I hadn’t cited one Brazilian artist in my dissertation. And all those I’d studied took white male European artists as a reference point,” she says. “So I decided to look for national references, and saw in the work of artists Marie Carangi, Paula Garcia, and Sofia Caesar an opportunity to discuss not only decolonial issues, but also feminism in Brazilian sound art,” explains Campesato.