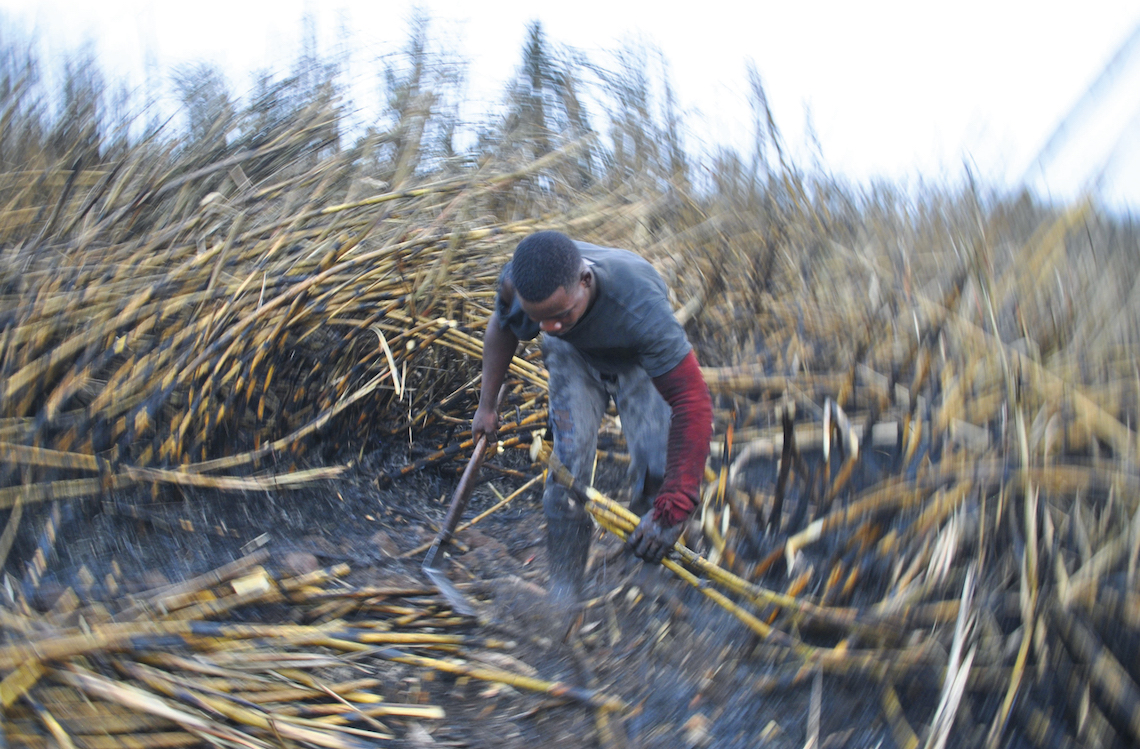 Sugarcane cutter in South Africa: bioenergy has stagnated on the continent due to a lack of investment and land ownership problems

More than 100 countries utilize sugarcane, but Brazil’s performance in this area of agribusiness is unique. The country is the largest sugarcane producer in the world, harvesting 646 million tons in the 2017/2018 season, and its mills produce high yields, manufacturing sugar and ethanol on a large scale and burning sugarcane waste to generate electricity. A group of researchers from the Interdisciplinary Center for Energy Planning at the University of Campinas (NIPE-UNICAMP) has spent the past five years studying why the model used in Brazil has not been equally successful in other countries with tropical climates, as well as studying the conditions needed for Latin America and Africa to increase their production of bioenergy. “Creating a robust network of countries that produce ethanol from sugarcane is important to solidify the biofuel market,” explains agricultural engineer Luis Cortez, a professor at UNICAMP. “The objective of our project is to produce knowledge to guide strategies in these countries.”

Cortez directs LACAF (Bioenergy Contribution of Latin America & Caribbean and Africa to the GSB Project), a thematic project begun in 2013 and linked to the Global Sustainable Bioenergy initiative (GSB), which discusses the viability of large-scale biofuel production on a global level (see Pesquisa FAPESP issue nos. 162 and 163). LACAF was established to answer three questions. First, why should a Latin American or African country take interest in producing ethanol? “The experience in Brazil, which has created a bioethanol industry and uses this fuel as a gasoline additive, partly answers this question,” says engineer Luiz Horta Nogueira, a researcher at the Federal University of Itajubá and at NIPE. “But there is a background, namely, unbalanced development. Latin America and Africa are moving farther away from industrialized societies in Asia. Bioenergy would help these regions to gain momentum.”

The second question is how can ethanol be produced sustainably? The researchers tested conservative scenarios. In an article published in January in the journal Renewable Energy, the group noted that countries like Guatemala, Nicaragua, and Cuba could use ethanol to replace 10% of the gasoline and between 2% and 3% of the diesel they consume just through productivity gains in mills and distilleries, without having to expand the area planted with sugarcane. In addition, by slightly expanding cane fields into areas of pastureland, Bolivia could replace 20% of its gasoline and diesel and still export excess ethanol. Electricity produced by bagasse (the fiber remaining after sugarcane is pressed) could meet the needs of one-third of the 11% of Bolivians who do not have access to electricity.

In Africa, the impacts would be even more extensive. A 2016 paper published by the group in Frontiers in Energy Research showed that a 1% expansion of sugarcane into pasture areas of Angola, Mozambique, and Zambia would generate a volume of fuel that could replace 70% of the wood used in stoves that fill kitchens with smoke and cause health problems. Furthermore, burning sugarcane waste could boost electricity generation by 10% in Mozambique, Malawi, and Zambia, and by 20% in Angola.

Third, how can production be expanded? To answer this question, the researchers found that no single path exists, even though the Brazilian model can serve as inspiration. Colombia, Argentina, Guatemala, and Paraguay have adopted a system similar to Brazil’s, with large plants producing ethanol, sugar, and energy. “To some extent, this is proof that the model is sustainable,” says engineer Manoel Régis Leal, a researcher at NIPE-UNICAMP. It is true that the scale of production is not comparable: Brazil is estimated to account for three-quarters of the sugarcane production in the Americas, while the other countries split the remaining 25%. “But regions like the Cauca Valley in Colombia, which have irrigated sugarcane fields, have high productivity,” says Leal.

Different forms of land use exist where this raw material is produced. In Brazil, an average of one-third of the sugarcane is planted on land belonging to refineries, another one-third on leased land, and the final one-third is purchased from independent producers. “But not all plants work this way, and there are places like India and Thailand where 100% of the sugarcane is supplied by small producers,” says Leal.

Assistance and inputs
The researchers visited several countries but concentrated their analysis on just two: Mozambique and Colombia. “Colombia is much more advanced, and even has research centers to improve production,” says Luis Cortez. Mozambique, however, has an environment of stagnation. An exception is Xinavane, a sugar producer in Maputo Province. “The company was established by the Portuguese, halted production during the civil war [1977–1992], and was later renovated by a South African group. The plant implemented a system in which small producers provide part of the sugarcane and receive assistance and inputs in return,” explains Leal. The difficulties in Mozambique, he notes, have to do with a complex structure of land ownership. “The land belongs to the government, and land grants are brokered by tribal chiefs.” Nevertheless, economic indicators tend to improve when a plant is built. “The people have access to more jobs, and there are gains in infrastructure, including power lines, hospitals, and schools,” says Leal.

The case studies suggest that the economic viability of bioethanol is related to large-scale production. “A model based on family farming does not work. Plants of a certain size ensure adequate productivity,” says Luiz Horta Nogueira. He explains that bioethanol has not become well established in other countries for several reasons. “One is limited resources for large projects. But there is still a significant amount of misinformation,” he says. “For decades, we have used ethanol in automobile engines, but in some countries, this fuel is still believed to cause corrosion.” The most recurrent concerns revolve around the idea that, if land is used to produce energy, space to produce food will be insufficient. “This doesn’t make sense. In Mozambique, we ran simulations expanding 1% into pastureland,” he says. “Since the post-war period, food availability per person has greatly increased. There are localized problems associated with income, but not with a lack of food.”