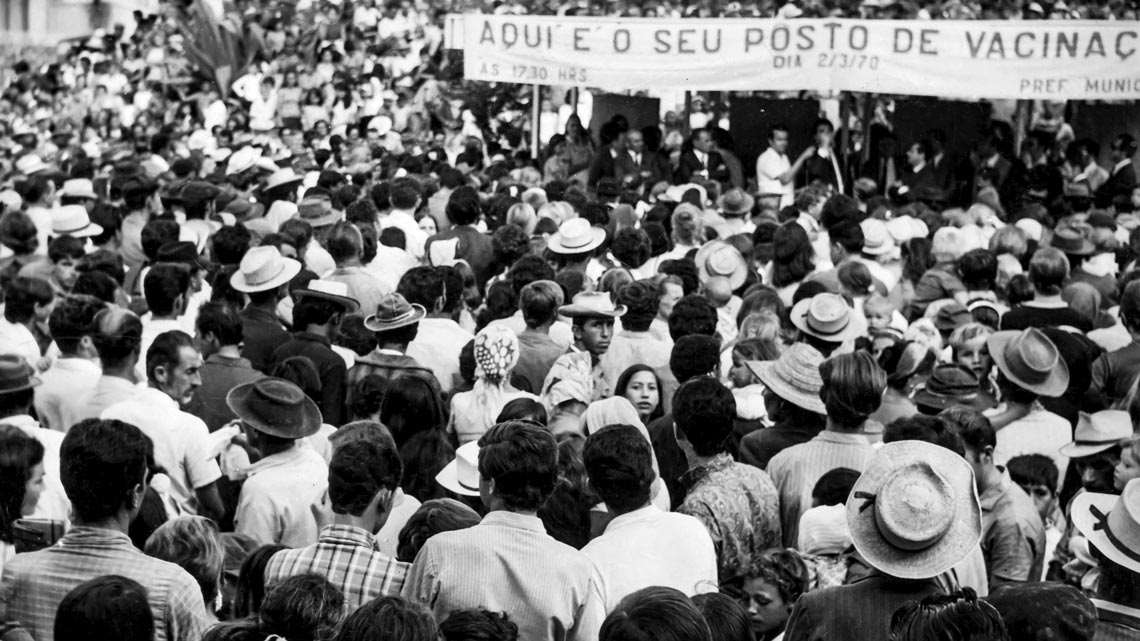 Fifty years ago, in April 1971, 19 residents of Vila Cruzeiro, a low-income community in the Penha neighborhood in the northern region of the city of Rio de Janeiro, were the last to have smallpox in Brazil. Also monitored by the World Health Organization (WHO), Bangladesh, in 1975, and Somalia, two years later, recorded the last cases of the illness, which in the prior decade caused the death of about 30% of all infected individuals, after they suffered from red bumps that covered the entire body before opening and releasing a yellow, pus-like liquid.

As no cases were reported in the following years, in 1980 the WHO recognized that smallpox had been eradicated worldwide. Caused by the virus Poxvirus variolae, transmitted person to person or through contaminated clothing and objects, this disease persecuted the human race for thousands of years. “Smallpox is not only the illness for which the first vaccine was developed, even before the development of microbiology, but it is also the first to have been eradicated through public health measures implemented on a global scale,” confirms epidemiologist Rita Barradas Barata, from the Santa Casa School of Medical Sciences in São Paulo. 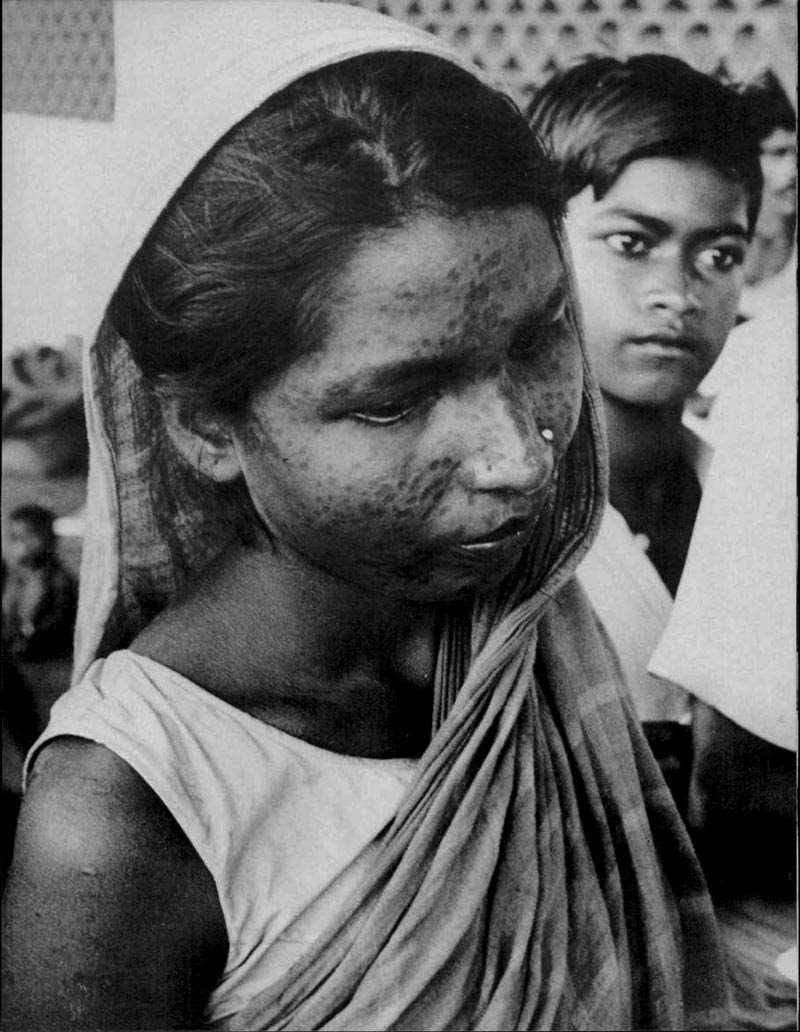 Scars marked the body of those who survived the disease, such as the woman aboveL. Dale / World Health, May 1980

The smallpox eradication campaign in Brazil has been the only one to completely achieve all goals. For malaria, while not eliminating the problem, the campaign did reduce the area of transmission, which stretched across the country in the 1940s and, beginning in the 1970s, was restricted to the northern region, as informed by epidemiologist Eliseu Alves Waldman, from the School of Public Health at the University of São Paulo (FSP-USP). In his opinion, yellow fever was the focus of the first eradication campaign in the Americas, at the beginning of the century, but the identification of the wild cycle of the disease made it inviable. Then, another campaign targeted the elimination of the mosquito Aedes aegypti, which transmits yellow fever and dengue. These two experiences “allowed for the development of field work strategies that were useful in combatting smallpox,” says Waldman.

The approach to the eradication of smallpox was based on the characteristics of the virus, of the disease, and of the possibility of using a vaccine with 95% efficacy. Smallpox is a genetically stable DNA virus that is a single strain (no variants), exclusive to humans. On the other hand, SARS-CoV-2, which causes Covid-19, is an RNA virus that mutates and lives in other animals. “The smallpox infection had a very defined course,” says Waldman. “The appearance of skin lesions, called rashes, coincided with the beginning of the elimination of the virus; therefore, isolation was an effective measure for reducing the risk of transmission.” Different from what is happening with Covid-19, there was no transmission between asymptomatic individuals. 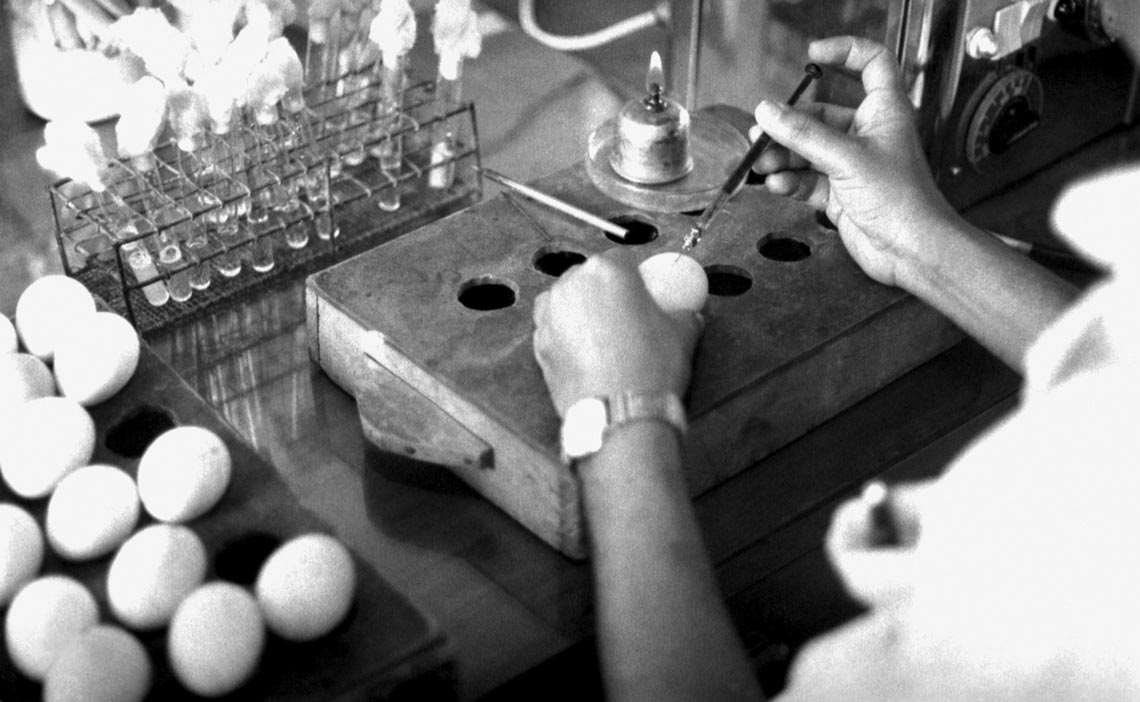 With direction from the WHO, the smallpox eradication campaign in Brazil adopted public health concepts and techniques used to this day to contain outbreaks or epidemics of new diseases. One of the strategies is community vaccination—applied to neighboring residents of a confirmed or suspected case soon after registration of a single case—which helped to contain the reappearance of measles in the last 20 years and is part of the plan to eradicate polio. Isolating sick individuals, which was adopted to contain smallpox, is an old practice that has been useful to reduce the contagion of the novel coronavirus. Those born before 1971 might remember a new strategy used in the smallpox campaigns at that time: the gun-like jet injectors used to quickly vaccinate thousands of people on the same day and also used in the 1970s for meningitis.

“The experience with smallpox eradication brought us a base from which to implement the 1973 National Immunization Program (PNI) and, in 1975, the National System of Epidemiological Surveillance (SNVE),” says Tania Maria Fernandes, historian at Casa de Oswaldo Cruz of the Oswaldo Cruz Foundation (COC-FIOCRUZ) in Rio de Janeiro and author of Vacina antivariólica: Ciência, técnica e o poder dos homens, 1808–1920 (Anti-smallpox vaccine: Science, technique, and the power of man, 1808–1920) (FIOCRUZ Publishing, 2010). Factoring in the federal, state, and municipal teams, the PNI distributes 19 vaccines against infectious diseases to newborns, children, and adults. The SNVE, which was born out of the facilities used to identify new smallpox cases, centralizes information about notifiable diseases and has been used to fight diseases such as polio and now Covid-19. 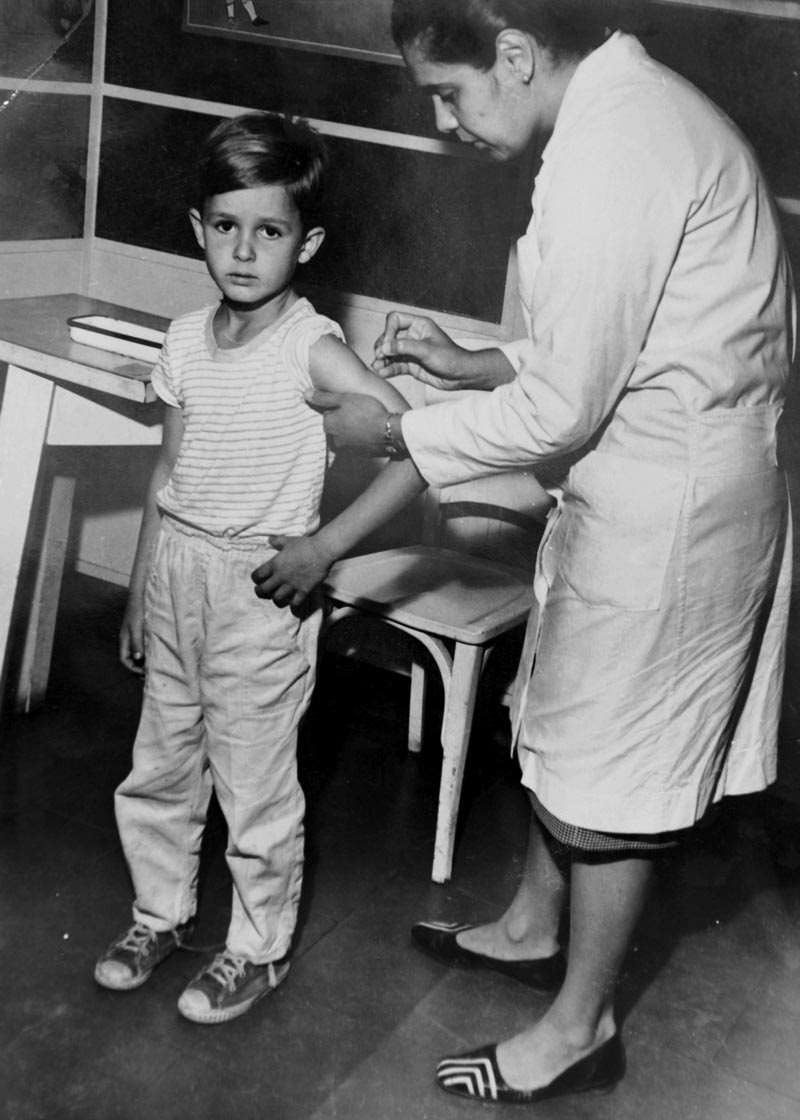 Related articles
Smallpox may have been the cause of death of one third of the population of Athens, Greece, in 430 BC. Brought over by European colonists, it was one of the illnesses that contributed to the elimination of native populations in South America in the sixteenth century. In Brazil, the first reported outbreak was in 1563, on the island of Itaparica, opposite the city of Salvador in Bahia and which killed mostly indigenous people.

In 1904, close to 7,000 cases registered in the city of Rio de Janeiro, then capital of Brazil, motivated physician Oswaldo Cruz (1872–1917) to propose the broadening of vaccinations, which were already obligatory. Civil protests, known as the Vaccine Revolt, ended with 945 imprisoned, 30 deaths, 110 injured, and 461 people deported to Acre. In a book published in 2009, Smallpox – The Death of a Disease, North American epidemiologist Donald Henderson (1928–2016), who led the WHO campaign, estimated that smallpox likely caused the death of 300 million to 500 million people worldwide in the twentieth century.

Immunization against this illness was an old practice. In ancient times, the Chinese collected the crust of wounds of people with smallpox, pulverized it, and blew it into the noses of other people to make them build immunity against the disease. At the end of the seventeenth century, physicians from Constantinople removed the liquid from the wounds of sick people and would wet a needle in it to then make small incisions in healthy people.

British physician Edward Jenner (1749–1823) was responsible for spreading vaccination across Europe beginning in 1796. He observed that women who were cattle herders did not contract smallpox if they had already acquired the virus from the animals, which is a milder version than that of humans, albeit similar. Jenner collected the pus from the hand of a herder, who had had bovine smallpox, and used it to inoculate a healthy boy of 8 years. The boy contracted a mild form of the disease, was then cured, and almost two months later, Jenner inoculated him with the liquid form of human smallpox. As he did not fall ill, Jenner deduced that he was immune. He repeated this process with other people, including his own son. Some years later, other European physicians adopted this technique. 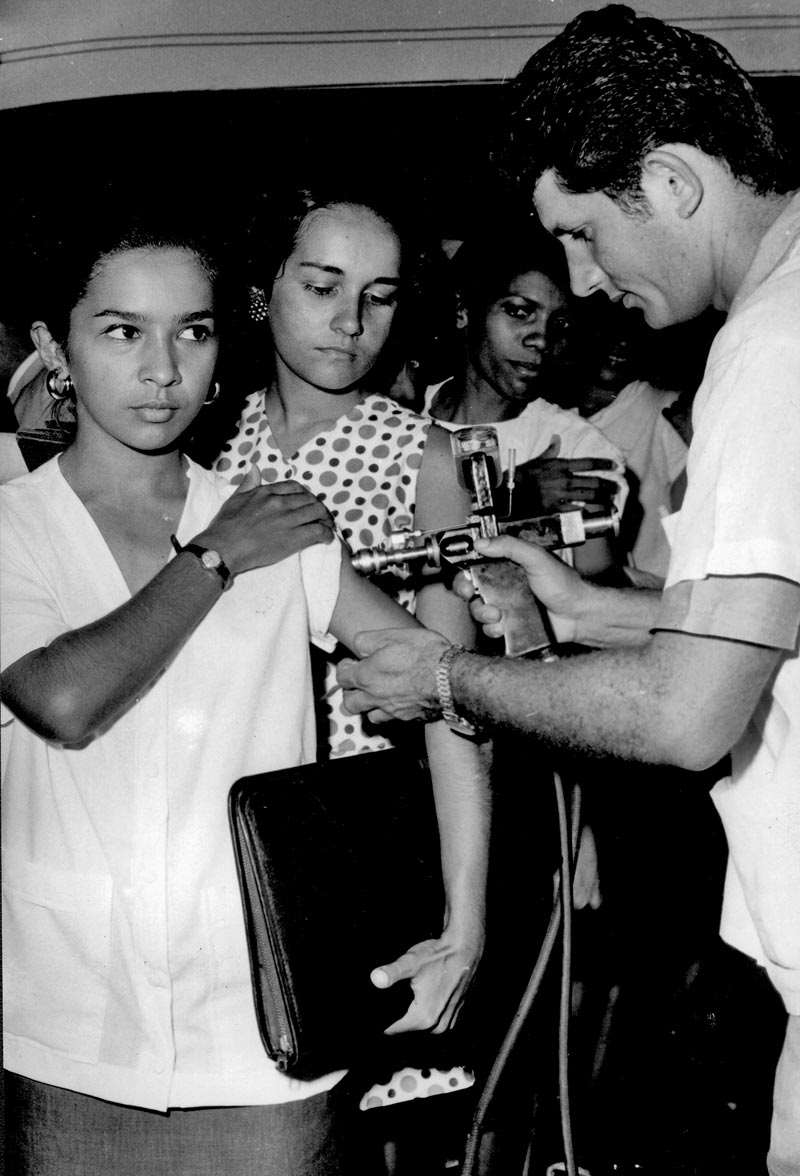 …was replaced with the jet injectorCasa de Oswaldo Cruz Collection

At the beginning of the twentieth century, the vaccine was already being produced with the virus Vaccinia, which causes bovine smallpox, at the Oswaldo Cruz Institute in Rio, at the Butantan Institute in São Paulo, and in laboratories in other states. “Immunity granted by the vaccine was long-lasting and could last an entire lifetime,” says Barata. “Inoculation with the vaccine would provoke a local infection that left an indelible scar, allowing for health services to know who had been vaccinated and who had not.”

In Brazil, after more than a half century of scattered actions, in January 1962, then-President João Goulart (1919–1976) launched the National Campaign against Smallpox (CNCV). Vaccination led to a reduction from 9,600 cases and 160 deaths, in 1962, to 3,623 cases and 20 deaths in 1966, when the CNCV was shut down and the Smallpox Eradication Campaign (CEV) was created in response to international pressure. “Even with clear international discussion in favor of eliminating smallpox, Brazil only created the eradication campaign in 1966,” notes Fernandes.

São Paulo physician Cláudio do Amaral Jr. (1934–2019), coordinator of CEV from 1970 to 1971, reinforced the surveillance of new cases and mass vaccination, primarily on Saturdays and Sundays. “Cultural celebrations, pilgrimages, religious gatherings, markets, artistic events, barracks, public schools, bus stops, and large companies were sites used for mass vaccination,” adds political scientist and health historian Gilberto Hochman, of COC-FIOCRUZ, in an article published in 2011 in the journal Science and Public Health. “Teams should be prepared to extend vaccination times to evening in order to manage all those who participate.” 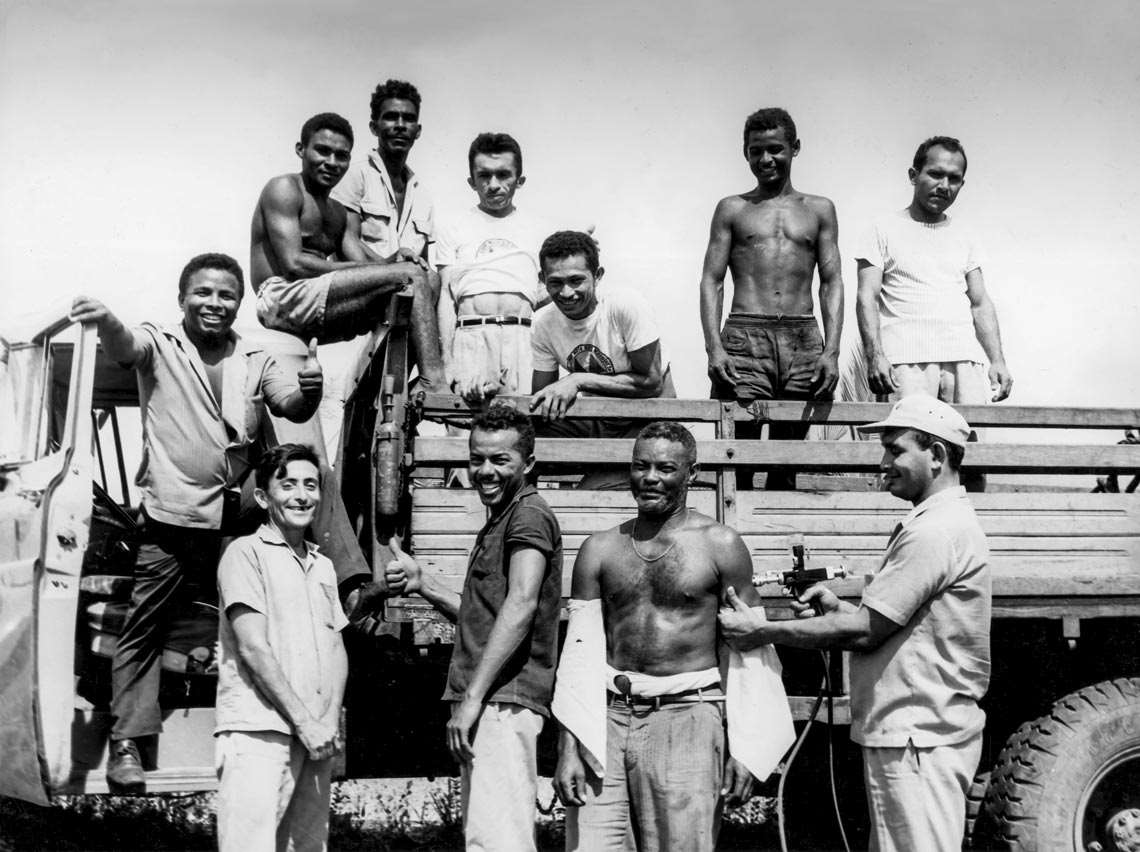 Health agents stopped trucks, such as this one in Maranhão in 1969, to vaccinate their passengersCasa de Oswaldo Cruz Collection

Amaral himself would go to the schools to talk with teachers and students. Once in Nova Iguaçu, in the state of Rio, surrounded by children in the first grade, he talked about smallpox and showed photos of people with the red bumps on their skin caused by the viral infection. Then, he told the children they would only get the disease if they were not vaccinated, showed them the injector, explaining that it was not a gun, and asked who would want to be vaccinated. “All wanted to,” he said in an interview granted to Fernandes, Hochman, and Daiana Chagas. When the campaign in Brazil was over, Amaral worked for five years in India and another five in Ethiopia, helping to fight smallpox. “The most notable accomplishment in all this effort was taking the vaccine to the most remote places in the world, guaranteeing very high coverage, capable of completely blocking viral circulation,” observes Barata.

Smallpox disappeared and the virus that causes it is stored in laboratories under high security, and only the military are still vaccinated. When global vaccination ended in 1980, two problems occurred. One of them, as Waldman points out, was the loss of immunity across the other members of the Poxviridae family, which were also blocked and, without the vaccine, could potentially reach people more easily. From January to September 2020, in the Democratic Republic of the Congo, for example, the WHO registered 4,594 suspected cases, with 171 deaths, of monkeypox, a virus similar to smallpox, which also causes skin lesions, albeit with lower lethality. The vessels for this virus are monkeys and small rodents. The other problem is the concern that terrorist groups could obtain the smallpox virus and use it as a biological weapon, since today the vaccine is only applied to members of the military. In Brazil, citizens under 50 years of age have not received it.