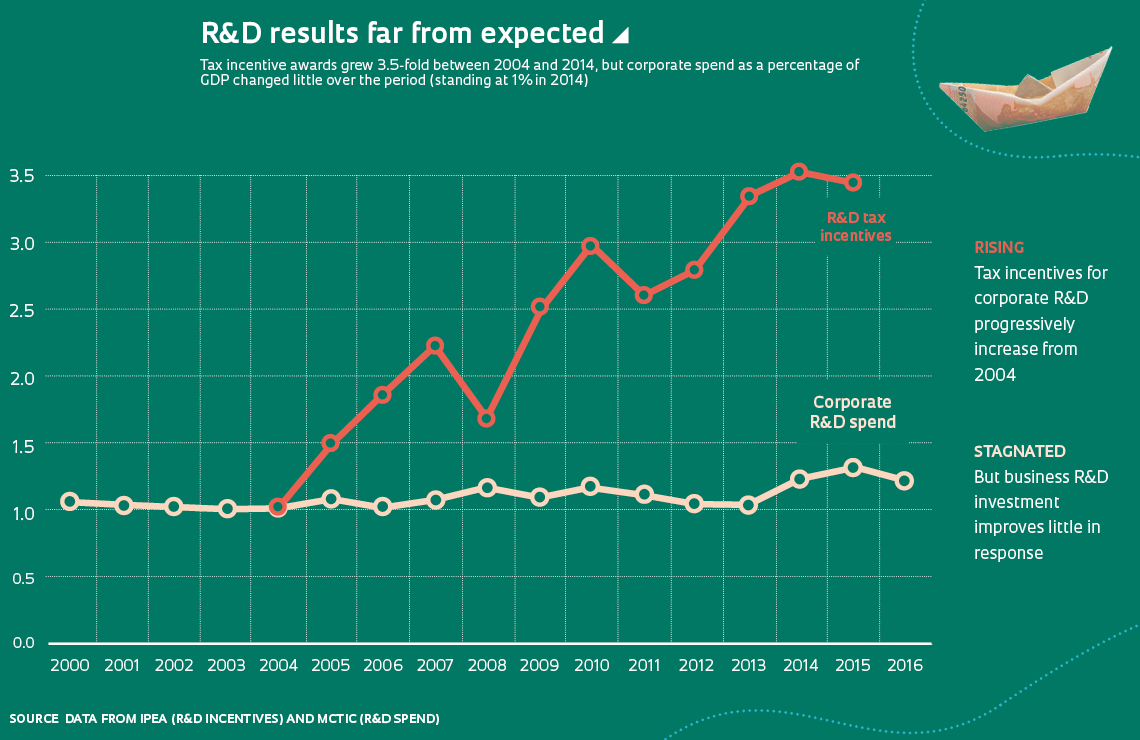 Federal Government tax incentives for firms investing in research and development (R&D) have risen substantially in recent years, from approximately R$5 billion in 2008 to R$11.3 billion in 2015. But a study published in July by the Institute for Applied Economic Research (IPEA) has found that the growing offering of tax incentives has failed to stimulate private investment in innovation as expected. Instead, public funding has simply displaced private funding, says André Rauen, an economist at IPEA who coauthored the study. “Tax exemptions have not led to corporations investing more in R&D than they would have without government support”, says Rauen.

But rather than condemning tax incentives altogether, the study points to the need to strike an optimal balance among the different policy instruments available to governments to fund private-sector innovation. These include direct funding for industry research, such as R&D subsidies providing non-repayable funds, and indirect funding, including tax exemptions. The weight of tax incentives in the policy mix has increased in the last several years due to a number of factors, including the fiscal crisis in Brazil and two policy measures adopted for the automotive industry—Executive Order 512 in 2010 and the “Inovar Auto” program (a program providing tax incentives for automotive R&D) in 2012. “Policy instruments such as “Lei de Informática,” “Lei do Bem,” and Inovar Auto have played an important role and already account for a third of direct R&D support for industry,” says Glauter Rocha, a public administration expert at IPEA and a coauthor of the study. The researchers used a model developed by professors at Harvard to compare data for Brazil with data for countries where R&D tax incentives were not available during the study period, including Germany, Denmark, New Zealand, and Switzerland.

“The fact is that few companies allocated funding to projects involving technological risk, even when receiving tax incentives. Instead of increasing their R&D investment, many firms used the tax breaks for incremental research with low levels of innovation,” says Rocha. “Another problem is that tax incentives are largely being used by companies to fund activities more related to the D for development than to the R for research,” he says. This strays from the purpose of the tax exemptions, which is for companies to boost investment in more cutting-edge research as well.

The authors of the study believe the Lei do Bem (a set of tax incentives for R&D to boost innovation) is an exception. “It works well because it operates horizontally, rather than vertically like other incentives do,” says Rauen. Lei do Bem incentives can be used by companies across different industries and can support the development of crosscutting technologies, like computer vision systems, which require knowledge in diverse fields, ranging from software engineering to medicine (see Pesquisa FAPESP issue no. 266). Conversely, vertical policies such as the Lei de Informática and Inovar Auto provide incentives only to specific industries, in these two cases the Information and Communications Technology (ICT) and automotive industries, respectively. According to André Rauen, the horizontal model has been used by many countries to drive disruptive innovation by fostering collaboration among firms and research groups in areas such as artificial intelligence and the Internet of Things.

Economist Carlos Américo Pacheco, a professor at the University of Campinas (UNICAMP), notes that the Lei de Informática, although requiring offsets from companies, was created more as an ad hoc tax policy for the Manaus Free Trade Zone than as an R&D incentive instrument proper. The tax incentives that have proven most effective, those under the Lei do Bem, are still underutilized. “The level of support available for private R&D in Brazil may seem fairly reasonable compared with other countries if tax incentives under the Lei de Informática and Inovar Auto are factored in. But it is very little, as a percentage of GDP, if you consider only the support that really matters, which is the Lei do Bem,” says Pacheco, who presides the Technical-Administrative Council (CTA) at FAPESP.

The Lei do Bem was created in 2005 to simplify the utilization of tax incentives. It allows companies to deduct 20.4% to 27.2% from their income tax and social security tax (CSLL) for investment in R&D and technological innovation. According to data from the Brazilian Ministry of Science, Technology, Innovation, and Communications (MCTIC), the number of incentive awardees grew from 130 in 2006 to 977 in 2013. The amount of tax incentives awarded has also increased, rising from R$227 million in 2006 to R$1.8 billion in 2015. A survey by the National Association for Research and Development of Innovative Companies (ANPEI) estimates that the Lei do Bem has supported the creation of more than 15 R&D centers to date. But an IPEA report published in 2017 showed that part of the increase in tax incentives had done no better than to replace private spending with public spending.

Another problem revealed in IPEA’s 2018 study is that tax exemption programs are not periodically assessed to provide a more accurate picture of the level of impact. The biggest roadblock is the difficulty in obtaining detailed data on these policies. “The lack of complete information means assessments are poorly substantiated, which prevents weaknesses from being identified and improvements proposed,” says economist Solange Maria Corder, a professor in the Department of Science and Technology Policy at the University of Campinas (DPCT-UNICAMP). The tax exemption amounts each company has been awarded, for example, are protected by fiscal confidentiality. Not even IPEA has access to this level of information.

Indirect data from the Brazilian Institute of Geography and Statistics’ (IBGE) Innovation Survey (PINTEC) shows that despite an increase in tax incentive awards through Inovar Auto, domestic R&D investment in the automotive industry declined from 1.28% of companies’ net revenue in 2011 to 1.1% in 2014. “Not only has it failed to drive technological innovation in the industry, but Inovar Auto has since been replaced by a new initiative without first being adequately assessed,” says Glauter Rocha. The program expired in December 2017 and was replaced in October this year by Rota 2030, with tax breaks expected to exceed R$2 billion in 2019. In 2017, tax exemptions under Inovar Auto were a total of R$1.2 billion, according to data from the Federal Revenue Service. The program awarded excise tax (IPI) credits (discounts on taxes payable) of as much as 30% to companies in the auto industry. For example, Inovar Auto offered an IPI reduction of 1% if automakers could produce vehicles burning 15.46% less fuel, and 2% for companies achieving fuel savings of 18.84%.

In 2016 the Federal Audit Court (TCU) initiated an investigation into the program and found there was little assurance that automakers would meet their R&D offset commitments. “Many automakers had their accounting and financial departments find ways to lawfully use the tax incentives without necessarily raising their R&D spend. Many activities that are not strictly R&D are reported as R&D, says Sérgio Salles-Filho, a coordinator at UNICAMP’s Laboratory for Studies on the Organization of Research & Innovation (GEOPI). A case in point, explains Glauter Rocha of IPEA, is tropicalization, or the adaption of foreign-designed vehicle models to the local market, which requires minimal innovation effort. Within the Inovar Auto program, automakers were expected to invest in engineering, basic industrial technology, R&D, and developing supplier capabilities in exchange for tax benefits. But instead, technologies were almost entirely brought from parent companies overseas and adapted to vehicles manufactured in Brazil (see Pesquisa FAPESP issue no. 267).

Salles-Filho believes there is a significant gap in current knowledge about barriers to industry research in Brazil. “With each successive administration, the notion that the tax burden and the cost of money are the primary constraints on business R&D investment has become increasingly cemented. And while these two factors can indeed be barriers to increased investment, not only in innovation but also in expansion and modernization, they are not the root causes of the low levels of private investment in R&D in Brazil,” he says. “The real problem is that, with rare exceptions, Brazilian firms are still essentially focused on Brazil’s protected domestic market, which demands relatively little innovation effort. Exposing them to foreign competition could help to put innovation higher on their strategy agendas.”

The Lei de Informática, dating back to 1991, also needs to be revamped, Salles-Filho argues, to incorporate policies aimed at the internationalization of software and data firms. A study published by economist Paulo Cesar Brigante of São Paulo State University’s (UNESP) Araraquara campus suggests that the Lei de Informática is poorly effective at developing Brazil’s capabilities for higher value-added manufacturing steps, which require more R&D investment. “This may be one of the reasons why R&D spending levels are limited—the lower complexity involved in domestic manufacturing processes demands less R&D investment,” Brigante wrote.

IPEA expects tax exemption awards for business R&D to reach R$17 billion in 2019. This is consistent with a global trend, says Glauter Rocha: “Tax incentives have gained increasing weight in innovation policy in a context of subdued economic growth and fiscal tightening.” Their biggest advantage, he explains, is that no funding needs to be provided immediately for R&D programs, easing government spending in the short term. In 2017, 30 of the 35 member states of the Organization for Economic Cooperation and Development (OECD); 21 of the 28 member states of the European Union; and several other major economies, such as China and Russia, used tax incentive mechanisms predominantly to support R&D.

One of the countries that is most invested in this model is France, where tax incentives account for 71% of government support for innovation in the private sector (compared with 27% in Brazil). However, a paper published in Research Policy in 2016 identified several downsides to this model, such as public funding crowding out private investment in French companies with less than 100 employees or low levels of innovation. In Argentina, which has also seen an expansion of tax incentives, this model has been shown to increase investment in capital goods but not as much in R&D proper, according to a paper published in 2016. In 2017, the International Monetary Fund and the OECD recommended that governments provide tax incentives to boost business research (see Pesquisa FAPESP issue no. 256). “Most countries at the forefront of technology use tax incentives as an important tool to promote R&D and innovation in the private sector. Brazil should also continue to use this approach, only more responsibly,” says Rocha.