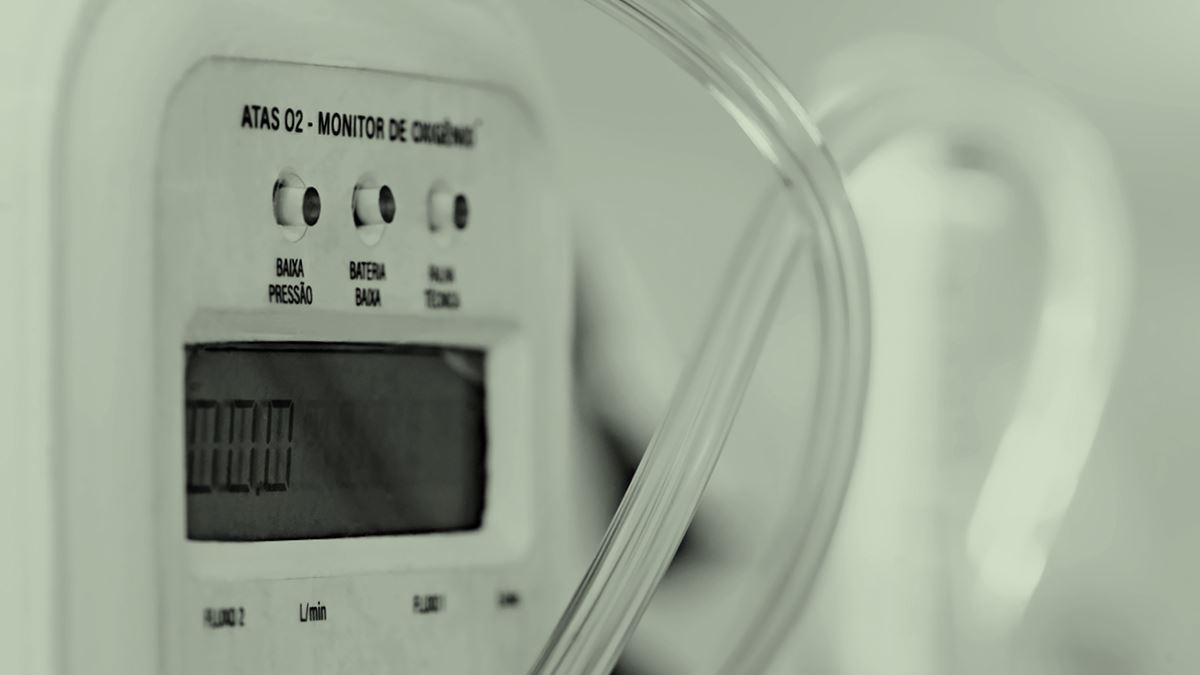 In January this year, all eyes in Brazil were on the COVID-19 crisis unfolding in Manaus, where many patients were were left without access to medical oxygen after supplies ran out. The shortage in the Amazonas state capital resulted in many deaths. Supplies also fell short in other parts of the world, such as India and Mexico, illustrating the importance of proper management of the gas, which is essential for treating people with diseases that cause respiratory failure. Oxygen therapy is also recommended for patients with chronic obstructive pulmonary disease (COPD), which currently affects more than 6 million Brazilians, according to the Brazilian Society of Pulmonology and Phthisiology.

The good news is that a number of Brazilian startups, including Salvus in Pernambuco, Oxiot in São Paulo, and Sensorweb in Santa Catarina, are developing devices that could contribute to better management of medical oxygen supplies. The novel systems use Internet of Things (IoT) protocols to monitor and automatically manage gas stocks without the need for human involvement.

Salvus’s solution is an online digital flowmeter called Atas O2. Coupled to a medical bed head unit, the device regulates oxygen flow and provides hospital administrators with real-time data on consumption—a bed head unit is a terminal next to a hospital bed with outlets for gases such as oxygen, nitrous oxide, and compressed air.

“Manaus experienced a complete logistical failure, which led to a major oxygen shortage. Our system makes it possible to understand the consumption profile of individual patients and the healthcare institution as a whole,” explains Maristone Gomes, founding partner and CEO of Salvus and a specialist in medical supply management systems. “It helps hospital managers see in advance how long stock will last. It wouldn’t have solved the problem in Amazonas, but it would have helped.”

The Atas O2 works like a hydrometer, a device that measures water consumption in homes. The difference is that it also uses sensors to electronically control the oxygen flow for each individual bed and for the hospital as a whole and automatically make the data available on a remote server (see infographic).

Created with support from the Recife Center for Advanced Systems and Studies (CESAR), the device issues reports on the gas consumed by each patient—essential information for accurate billing—which is currently performed manually in most cases and is therefore subject to errors. “The consumption database can also support research by correlating patients, the treatment received—i.e., the amount of oxygen consumed—and outcomes,” says Gomes.

Salvus has also created a version of Atas O2 that can be attached to gas cylinders to monitor oxygen prescribed to patients in home care. A pressure sensor measures how much gas is left, which in addition to data on flow and consumption, is transmitted to home care companies, which can control stock remotely and be schedule delivery of a new cylinder in advance.

“Currently, an employee has to call the patient’s home and collect information about the gas supply from the patient, a family member, or caregiver. Measurements are often not taken correctly and cylinders are changed before they are completely empty, generating losses,” says the Salvus CEO. Medical gas management experts estimate that the rate of oxygen wastage in Brazil is around 20–30%. “Our device can help prevent this loss.”

The idea of developing a system for this purpose first arose in 2015, recalls Gomes. The following year, he and two colleagues, Luiz Paulo Godoy and Caio Cesar, founded Salvus. The first proof of concept was ready in 2016. Around R$3.5 million has been invested in the project to date. In addition to its own resources, Salvus has received funding from the Brazilian Agency for Industrial Research and Innovation (EMBRAPII), the Brazilian Support Service for Micro and Small Businesses (SEBRAE), the Brazilian Development Bank (BNDES), and Softex, an organization that funds initiatives associated with digital transformation.

“The Salvus project is in line with EMBRAPII’s mission to promote industrial innovation in the country,” says the agency’s president, Jorge Guimarães. For him, automation like that provided by Salvus’s device can “prevent failures, improve logistics, assist in medical decision-making, and above all, ensure patient safety.”

Devices under development in Brazil could help reduce the medical oxygen waste, estimated at up to 30%

The first batch of one thousand Atas O2 units will be ready in September, manufactured by partner companies in São Paulo and Minas Gerais. “We are going to use the first batch to validate the system on an industrial scale, and from then on, our production capacity will be 5,000 units per month,” states Gomes.

The equipment is already being tested by the Hospital das Clínicas at the Federal University of Pernambuco (UFPE), home care companies Saúde Residência and Interne Soluções em Saúde, both based in Pernambuco, healthcare provider Grupo Cene, from São Paulo, Hospital Israelita Albert Einstein (HIAE) in São Paulo, and various other health institutions.

“Since February, 20 Salvus flow meters have been used at HIAE as part of a research project. They were installed in a semi-intensive coronary care unit that historically has had a greater number of billing rejections,” explains Denis Faria Moura Jr., a nurse who works on new projects at the hospital. Medical claims for a particular service or procedure performed by a health care institution may be rejected by an insurance provider for technical or administrative reasons. Errors in the measurement of how much oxygen has been given to a patient is one such example.

“The results so far are positive. We believe that the device can help us to better manage medical oxygen at the hospital.” Moura states that if all goes well, the device will be installed on around 2,000 oxygen outlets in the hospital. “In addition to providing more accurate doses, ensuring patients receive the amount they have been prescribed, the device can also help identify leaks and plan purchasing.”

São Paulo–based startup Oxiot has designed a solution for home care, medical clinics, and small hospitals that use gas cylinders. “We decided to focus on family oxygen therapy to solve a very clear problem for patients and health services: predicting when to replace cylinders and remote clinical monitoring,” explains Edson Costa, CEO of the company. “And operating in a large hospital is much more complex than in a home.”

Development of the device began in 2015, with around R$450,000 invested so far, two thirds of which was provided by Brazil’s National Service for Industrial Training (SENAI). “We have a working prototype, comprising both hardware and software, which remotely monitors the oxygen level by measuring the pressure in the cylinder rather than the flow, setting it apart from flow meters,” he says. 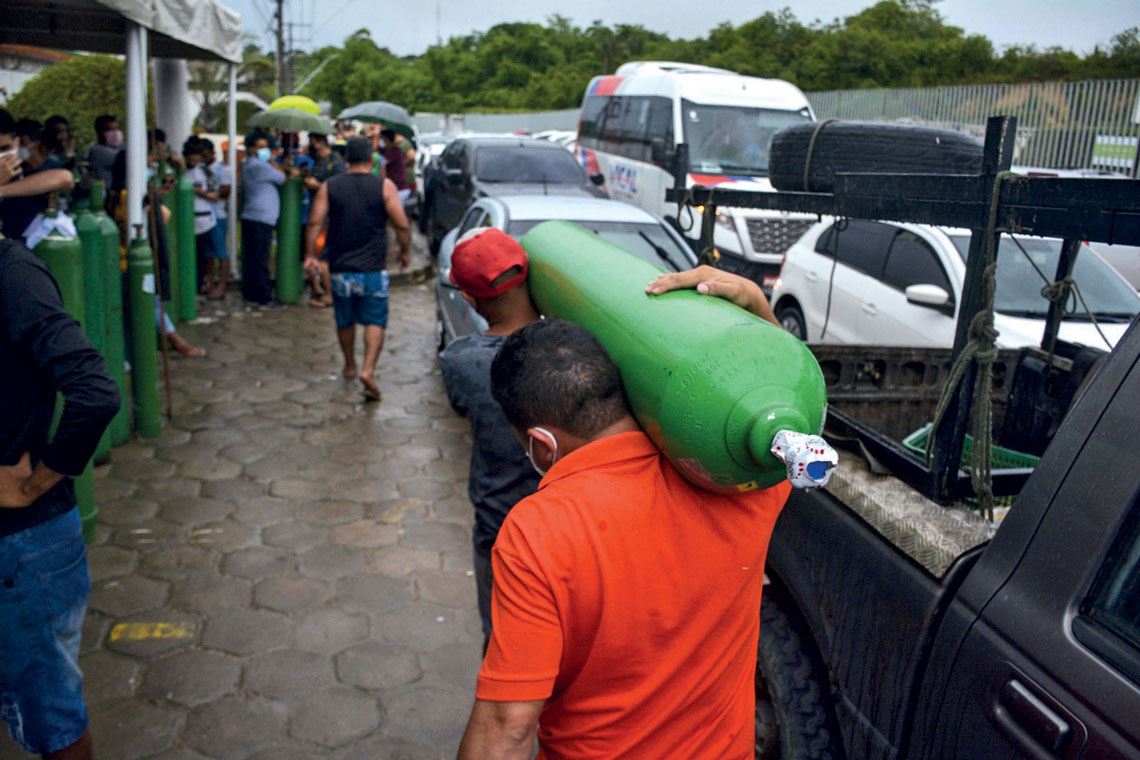 Oxiot needs another R$400,000 at least to complete the product. “This was the amount we forecast before the pandemic. With this money, we could have first prototypes ready for testing in a clinical study within two months. The next step would be to make any final adjustments to the technology and obtain approval and certification from the country’s regulatory authorities,” says Costa.

Sensorweb, based in Santa Catarina, specializes in IoT solutions for the health care sector. The startup is currently working on a medical gas measurement and management system. “It isn’t a flow meter—it’s a piece of hardware that connects to the bed head unit, measures oxygen consumption, and sends the data to a cloud platform using IoT, also created by us,” explains Everson Pinheiro, new business analyst at the company.

The solution is in its second version and for now is being used exclusively by hospitals and health centers. One of its advantages is the ability to issue alerts on critical situations that might put a patient’s life at risk, as well as unexpected gas losses due to leakages or operating errors. The proof of concept is being tested in an oncology hospital in São Paulo.

“The prototype is in operation and the data it collects is being published on our platform, which also monitors other quantities, such as ambient humidity and temperature, at 7,000 points in more than 350 health care units,” explains Pinheiro. According to the startup, several tests at interested hospitals had to be rescheduled due to the second wave of the COVID-19 pandemic.

Sensorweb’s interest in creating a solution of this type first emerged about five years ago, when the company began a partnership with a large hospital and a university in São Paulo—whose names cannot be revealed for contractual reasons—to develop medical oxygen management sensors. For technical reasons, the collaboration broke down and the startup decided to invest 100% into its own project.

To create its new medical gases measurement system, the company received funding of roughly R$290,000 from the Santa Catarina State Research and Innovation Foundation (FAPESC). If all goes to plan, it hopes to launch the product on the market by the end of 2022.