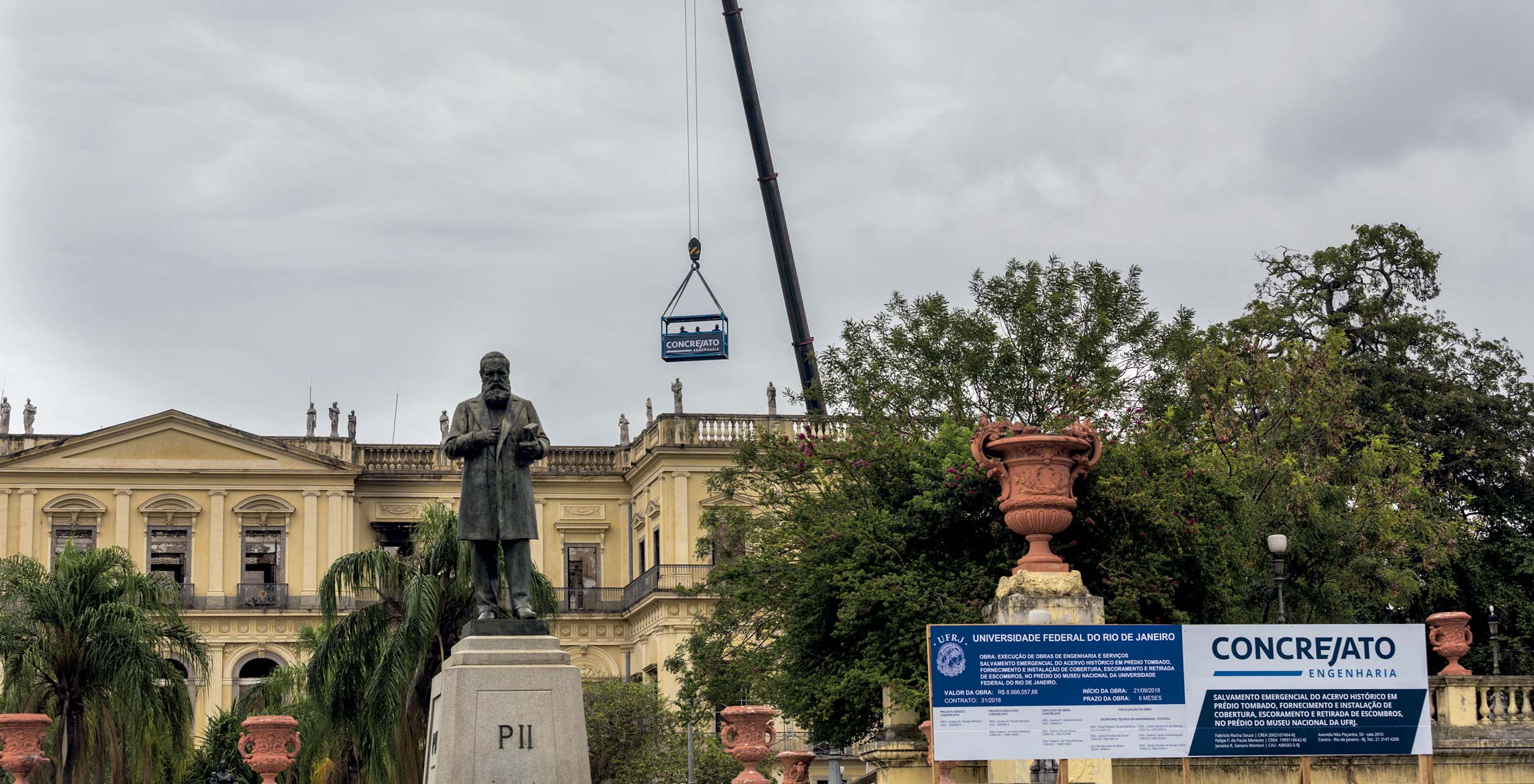 The flames that engulfed the National Museum attracted global attention—and global solidarity. Governments, museums, and institutions from countries such as Germany, Italy, France, Spain, Argentina, the USA, and Canada quickly offered their support. The United Nations Educational, Scientific, and Cultural Organization (UNESCO), using resources from its Heritage Emergency Fund, sent a multidisciplinary team of disaster management specialists to Brazil. The delegation has already inspected the site and assessed the damage caused by the fire. Led by Italian historian Cristina Menegazzi, head of the Emergency Safeguarding of the Syrian Cultural Heritage project at the UNESCO office in Beirut, Lebanon, the group will help Brazil plan the next steps for physically restoring the museum.

“There are highly qualified specialists in Brazil. We will coordinate with experts from other countries to complement local skills, set up a council linked to universities and cultural departments, and create an international fund for restoring the building and salvaging what we can from the rubble,” said Menegazzi. After verifying that 90% of the facade still stands, she sees no reason why the palace should not be rebuilt. “Many parts of the building and its finishings are recoverable.”

Watercolor by Debret, 1817, shows the palace after its first major renovation. On the right, a neo-Gothic style pavilion, designed by architect John JohnstonReproduction from the book Debret e o Brasil – Obra complete

The building shall be restored to the same standard as the original. With 13,600 square meters of space over three floors, the palace was a neoclassical design with eclectic decoration. “But it was not always so. The palace underwent successive renovations while it was home to the Portuguese Royal Family after they moved to Brazil in 1808,” says architect Ronaldo Foster Vidal, from the Brazilian Institute for Engineering Assessments and Expertise (IBAPE).

The original building was constructed in 1803, in baroque style, by slave trader Elias Antônio Lopes (1770–1815). It was designed by architect José Domingos Monteiro (1765–?) and it is believed likely that architect José da Costa e Silva (1747–1819) also contributed. “At the time, it had two floors,” says Foster. “To meet the standards demanded by nobility, it went through a change of style and many extensions before becoming the official residence of emperors Dom Pedro I and II.” With each intervention, the palace gained neoclassical features, inspired by the Palace of Ajuda in Lisbon.

“The walls that resisted the fire are made of solid stone. To erect new internal walls, the foundations will need work, probably using an Italian technique known as micropiles, which are designed for restoring old and historic buildings,” asserts Foster. According to him, instead of using a standard pile driver, which causes high levels of vibration, a helical blade similar to a corkscrew can be used to drill the holes. “This would allow new columns to be placed to support mushroom slabs, which are about 20 centimeters thick and do not require beams. They must be held up by pillars.”

Side view of the building between 1858 and 1861Wikimedia Commons

This technique could be used to rebuild the entire infrastructure, including water, electricity, and telephony. “With the floors and ceilings finished in the style of its era, the building would be ‘brand old’ rather than brand new,” jokes Foster. He says that using mushroom slabs could perfectly substitute the wooden joists used to support the floors at the time of construction. The cost of reconstructing the palace has been estimated at somewhere between R$70 million and R$120 million.

The materials chosen for the project are fundamental. “Today we have the technology to make historic buildings safer. Wood, for example, can be treated with an intumescent paint that protects it from fire,” explains architect Pedro Mendes da Rocha, who was in charge of restoring the Museum of the Portuguese Language, located in the Estação da Luz railway station in São Paulo, after a fire in December 2015.

Just like at the National Museum, the fire there spread because of the large amount of flammable material used to build the structure. “That’s why we rebuilt the roof with certified wood, two centimeters larger in all dimensions, which can withstand two hours of fire—enough time to evacuate the public if necessary,” says Rocha. Some of the technological advances now available include gases capable of containing localized fires without wetting or damaging nearby objects, and heat and smoke sensors that communicate with a monitoring system via Wi-Fi. “Proper use of anti-fire technologies raises the cost of the work by approximately 30%,” Rocha estimates. “That’s a lot of money, but what value would you place on a mummy like the one burned in the National Museum?”

The Palace of Ajuda in Lisbon, made of stone and lime, was the inspiration for the first renovations of the São Cristóvão PalaceWikimedia Commons

Currently involved in the renovation of five other museums, Rocha has researched new techniques and solutions used in cultural institutions considered examples of excellence in terms of conservation and security, such as the Beyeler Foundation in Basel, Switzerland, and the Louvre Museum in Paris, France. “The Beyeler Foundation has a kind of asbestos blanket underneath every bench in every room, which can be used to contain fires, as well as a trained firefighting team available 24 hours a day,” he explains. Inaugurated in 1793 in the former palace of the French monarchy, the Louvre has 2,000 fire extinguishers, 8,000 smoke detectors, and firefighters stationed in all wings so that they can quickly access any area of the building in an emergency.

When the fire started, the National Museum had already closed to the public, the firefighters were no longer there, and just four guards were patrolling the building. It was later learned that the building never had the mandatory Fire Department Inspection Certificate that demonstrates compliance with legal safety standards.

Brazil has the necessary technical knowledge and museum conservation specialists

Technical qualification
The difficulties involved in conserving and maintaining museums in Brazil are not the result of a lack of technical knowledge on the subject. The country has specialists, including in the area of ​​fire prevention. One such example is architect Rosaria Ono, a professor at the School of Architecture and Urbanism at the University of São Paulo (FAU-USP), who has studied locations where large numbers of people gather, such as the fire at the Kiss nightclub in Santa Maria, Rio Grande do Sul State, where 242 people died and 680 were injured five years ago.

Using that episode as a starting point, Rosaria has investigated ways to minimize the consequences of fires. Recently, she began surveying the conditions of museums located in historic buildings in the state of São Paulo. She has so far visited 10 institutions. “The major challenge is to understand the characteristics of each building and map the possible ways of increasing safety without changing the architecture,” she says. Since almost all were built at least partly in wood, one suggested technique is to compartmentalize the spaces by installing physical barriers, such as concrete walls and slabs, to contain any fire that may occur. “As a sign of gratitude to these institutions that open their doors to research, we want to help directors protect their collections in the short, medium, and long term.”

Cristina Menegazzi (middle), head of the UNESCO mission, during a visit to the ruins of the National MuseumFernando Frazão/Agência Brasil

Architect Sheila Walbe Ornstein, also a professor at FAU and a member of the same research group as Ono, says that modernization of the historic buildings that house important physical collections is inevitable. “In the past, we didn’t even consider keeping tanks of water for containing fires,” she says. “Modernization helps to preserve and conserve the building itself, including its period architecture and the collections exhibited or stored there.”

“In the beginning, buildings like the National Museum were lit with candles and lamps,” points out Jovanilson Faleiro de Freitas, an electrical engineer and coordinator of the Specialist Electrical Engineering Chambers at the federal and regional Engineering and Agronomy Councils (CONFEA/CREA). “Since then, much has changed in the palace. First, there was gas lighting, then electricity, with wires insulated by bitumen-coated paper. This process of evolution is a nightmare for every historic building, because when electrical installations are not properly updated, the whole building is put at risk.”

In order to guarantee the safety of these electrics, modern wiring must be proportional in size to the amount of energy used, and must be contained in metal conduits. In the event of an overload, circuit breakers automatically disarm the system, preventing short circuits. “In addition to proper installation, these systems need to undergo maintenance more than once a decade,” says Rocha. Museums need technical teams able to follow and update safety standards, including for one-off exhibitions with specific characteristics, which are regular occurrences in these buildings.

Historic buildings must be constantly and preventively maintained

When the Museum of the Portuguese Language caught fire nine years after undergoing a major renovation, it was hosting a traveling exhibition. The accident was caused by a short circuit in a floodlight. The fire spread rapidly because the space was filled with highly flammable material: numerous fabric hammocks and 20,000 books. “It is very important to have a risk management team,” says Ornstein, who knows the situation faced by museums all too well, having served as director of USP’s Paulista Museum from 2012 to 2016. Soon after taking the position, the architect had to deal with cracks throughout the building caused by humidity. The major red flag was when the ceiling of one room, made of mortar and palm wood—and therefore very heavy—had to be supported to prevent it from collapsing. “The museum also had accessibility and fire safety issues,” she says. “After listening to specialists on staff, the management team and the board deliberated on the risks and decided to close the museum to the public preventively until the necessary adaptations have been implemented,” says Ornstein. The works are expected to be completed by 2022.