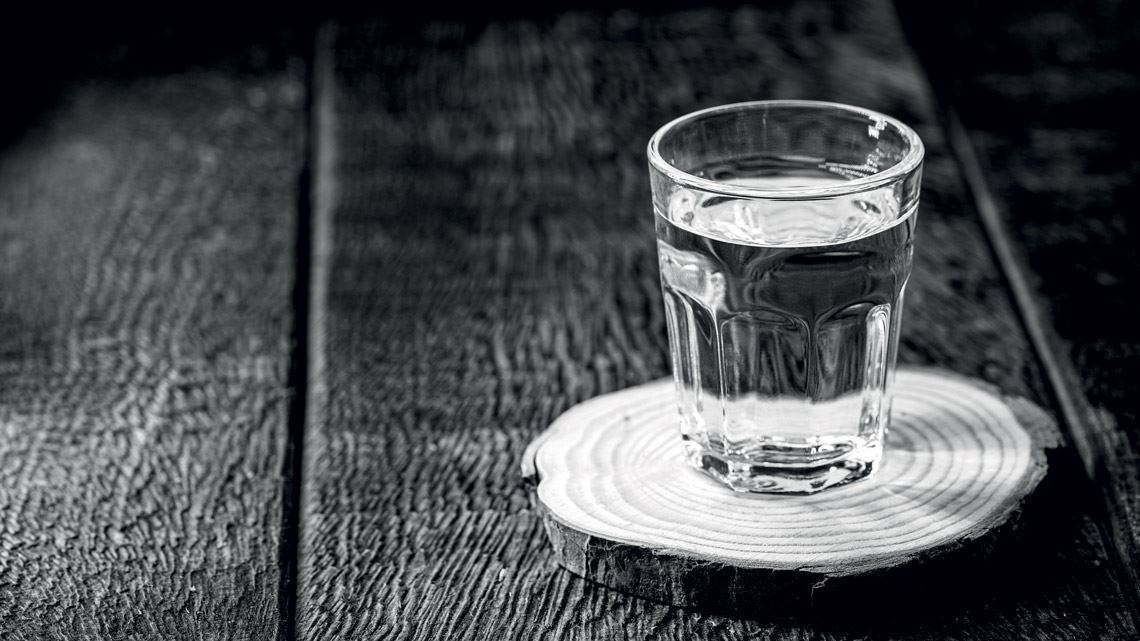 Like colonel Aureliano Buendía, a character in Colombian author Gabriel Garcia Marquez’s (1927–2014) masterwork One Hundred Years of Solitude, who fought 32 revolutions and lost them all, João Manso Pereira (175?–1820), a Latin grammar teacher and self-taught chemist, developed a series of improvements to cachaça production methods that were all rejected by Brazil’s conservative colonial cachaça makers. Born in either Minas Gerais or Rio de Janeiro, and described by historians as “a tall, thin mulatto,” he devised an improved still ideally suited for distilling sugarcane spirits. Although he never lived to see his ideas implemented commercially, many of them proved to be useful centuries later. He also experimented with many of the alternative raw materials, such as fruits, that are now used for the production of special spirits.

In present-day Ilha do Governador, Pereira discovered a white, kaolin-rich clay which he used to made crockware, porcelain, and small sculptures called cameos. He sent Queen Maria I of Portugal (1734–1816) a bust of herself made of white clay, and another of her husband, Dom Pedro III (1717–1786). In 1793, the queen sent a letter thanking him and another to the viceroy of Brazil, José Luís de Castro (1744–1819), ordering him to give the chemist all necessary support to pursue his projects, in violation of her own decree which banned manufactories in Brazil.

In his book, Memória sobre a reforma dos alambiques ou de um próprio para a destilação das aguardentes (Essay on the development of stills specially designed for producing sugarcane spirits), published in Lisbon in 1797, Pereira criticized the methods used by master distillers such as French chemist Jean-Antoine Chaptal (1756–1832), arguing that sugarcane distillation did not need to be as lengthy a process as then believed. The word “pinga” or “drip,” a popular term for cachaça in Brazil, derives from the fact that the diaphanous liquid would slowly drip into a container after being purified.

In his book, Pereira described a still with different dimensions from those used at the time. Stills, or alembics, were first invented by chemists in Alexandria, Egypt, between 200 and 300 AD, and were originally made of clay. A typical still has four main parts: a vessel where the fermented sugarcane juice is boiled, called the cucurbit; an outlet from the cucurbit, called the still head; a connection through which the evaporated alcohol rises, called the swan neck; and a coil through which the vapor condenses and becomes liquid. 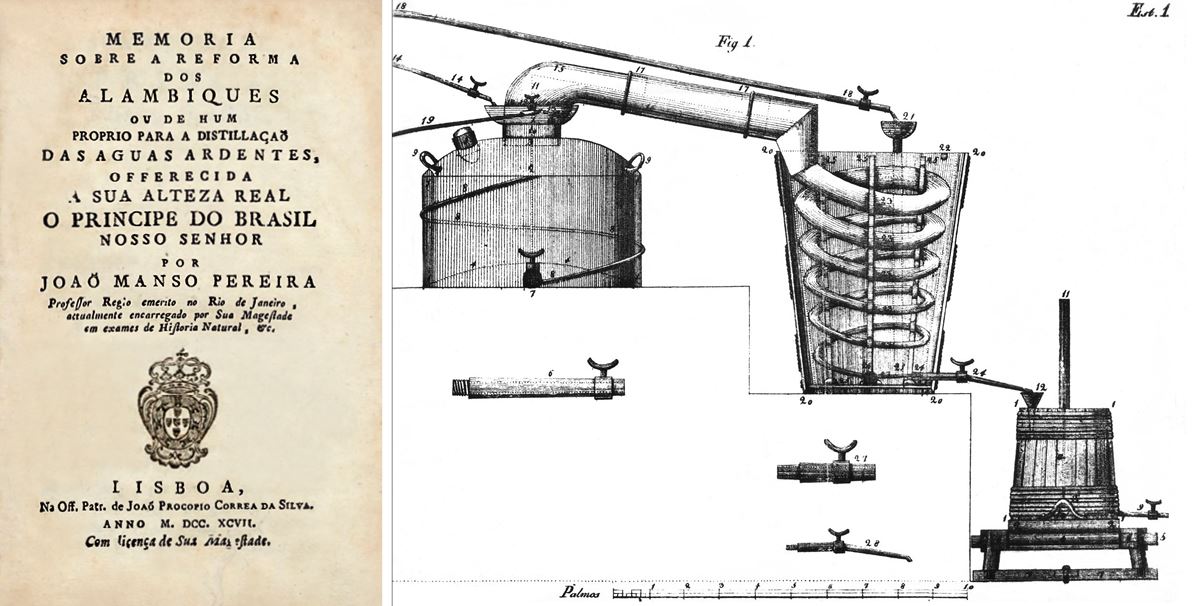 Pereira proposed a narrower head and the use of cold water to cool the vapor, which would return to the boiler before flowing through the passage. He believed these modifications could improve the separation of unwanted components, which would more easily pass through a wider aperture. “The extensive experiments I carried out with a small still, which I had made for this purpose, showed me that the immersion of the swan neck in cold water slows the distillation process by removing needed heat,” he argues in the book.

He proposed that the coil should have a smaller diameter and fewer turns, and be immersed in cold water. “Modern stills use tubular condensers rather than coils, which are continuously immersed in chilled water,” says crop scientist André Ricardo Alcarde, who heads the Spirits Technology and Quality Laboratory at the Luiz de Queiroz College of Agriculture of the University of São Paulo (ESALQ-USP). “João Manso combined his theoretical and practical knowledge to develop a modern still design.”

Another idea of his that was only adopted many years later was that the cucurbit should be made of cast iron and the other parts of pure tin, to avoid contaminating the spirits with copper oxides. “Today’s stills are often made of stainless steel precisely to avoid contaminants,” says Alcarde. “But the apparatus cannot be entirely made of stainless steel. Having at least some copper parts is important to remove sulfur compounds.” 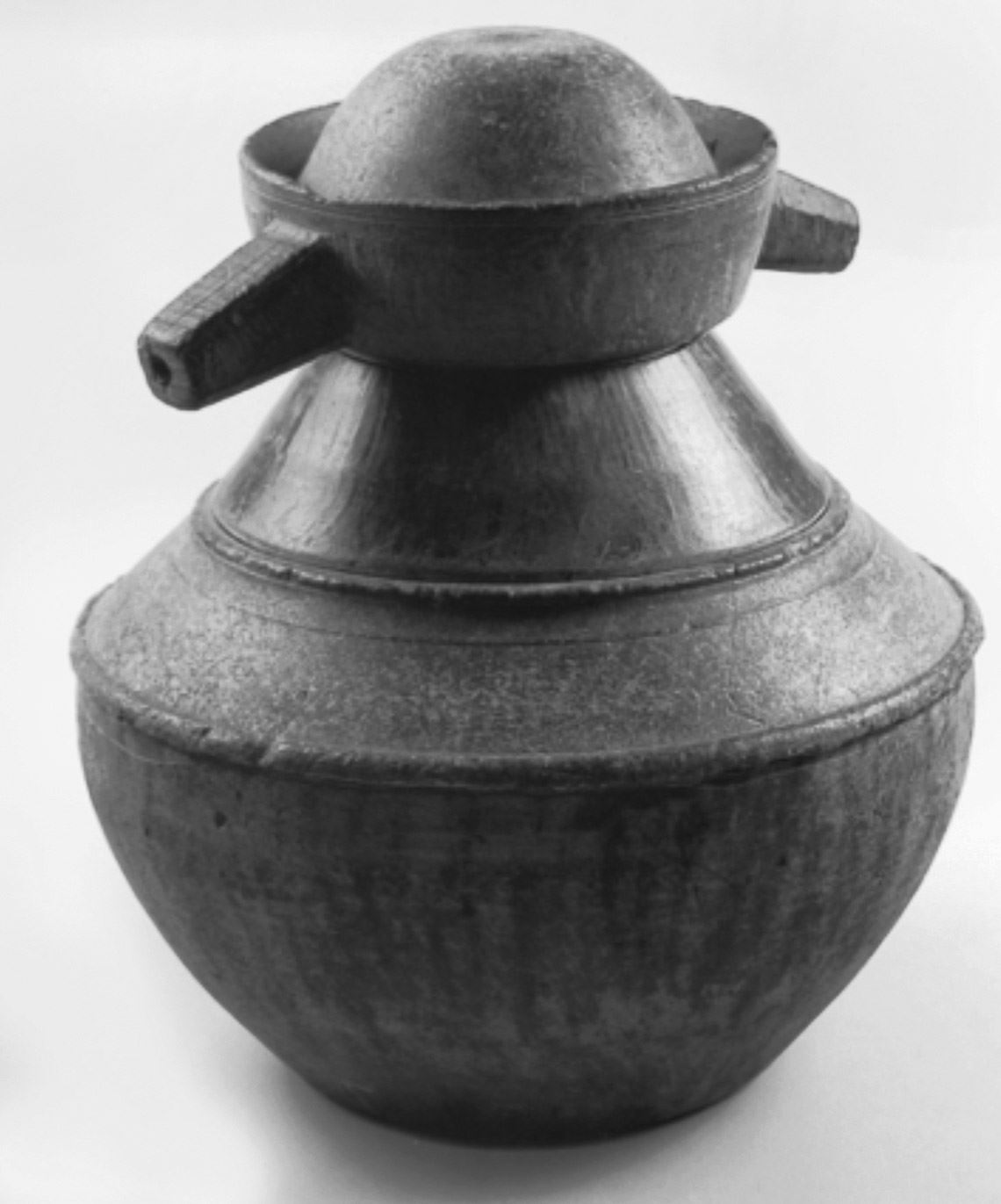 A colonial still made of soapstone at Museu da Inconfidência, in Ouro PretoReproduced from Biblioteca Digital Luso-Brasileira

In another book, Memória sobre o método econômico de transportar para Portugal a aguardente do Brasil com grande proveito dos fabricantes e comerciantes (Essay on economic methods of transporting Brazilian spirits to manufacturers and merchants in Portugal), published in Lisbon in 1798, Pereira argues that merchants could spend less on freight if they shipped more concentrated spirits to be diluted in Lisbon. He also experimented with alternative types of wood for making cachaça barrels, as the ones used at the time were prone to leakage. “Today the choice of wood is primarily a concern at the maturation stage,” says Alcarde. “Cachaça acquires its yellow, brown or green hues from reactions with the barrel wood, just as with whiskey and brandy. Without this step, all distillates are colorless.”

But Pereira’s innovations were met with opposition. “We know of no instances where his propositions were ever implemented,” notes Carlos Alberto Lombardi Filgueiras, a chemist and historian at the Federal University of Minas Gerais, who authored the book, As origens da química no Brasil (The origins of chemistry in Brazil; Editora da Unicamp, 2015). “Cachaça makers were very conservative and reluctant to try anything new.”

Pereira also ventured into other areas of chemistry. In Angra dos Reis, a coastal town in the state of Rio de Janeiro, he suggested to the vicar that the town’s graveyards could be used to extract nitrate—a compound formed by nitrogen and oxygen from decomposing cadavers—for the production of gunpowder. He claimed preliminary experiments had been successful. The townspeople, however, protested that the dead should be left in peace and his idea was never implemented. 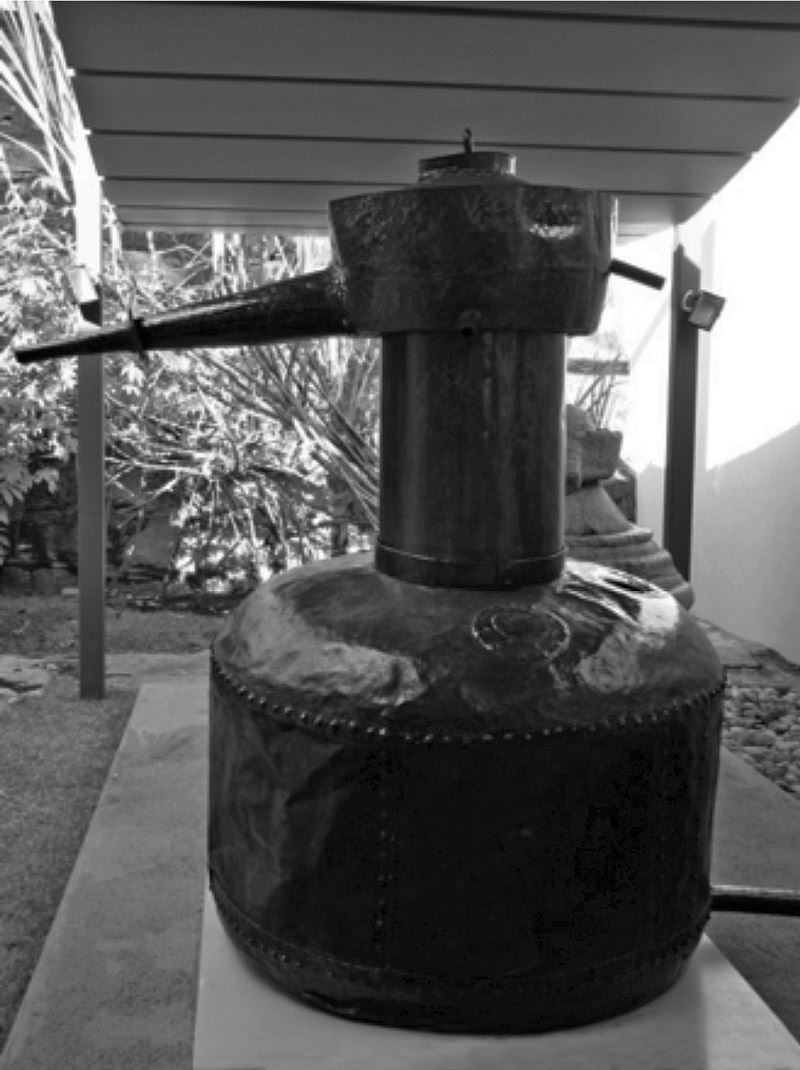 In another mission, he was commissioned to evaluate the feasibility of producing iron from ore bodies in Araçoiaba da Serra, a municipality near Sorocaba, in southeastern Brazil. “In 1802, he carried out several experiments and confirmed that the ore was commercially viable, but he was overly optimistic,” says Fernando Gomes Landgraf, a professor of metallurgical engineering in the Polytechnic School at USP. Experimental production proved unsuccessful. “It is a common mistake among chemists to believe they will be able to reproduce their experiments at scale,” says Filgueiras. “You can’t simply multiply the reagents by 10 or 100, as the proportions and reaction conditions change.”

Pereira also translated and published the book, Mémoire sur une nouvelle méthode distillatoire appliquée à la distillation des eaux-de-vie et à celle de la mer (Essay on a new distillation method applied to the distillation of spirits and seawater), published in 1805 in Lisbon. In the footnotes, he noted points on which he disagreed with the author, the French chemist Jean-Baptiste François Rozier (1734–1793), and described discussions he had had about distillation methods at the Rio de Janeiro Literary Society, of which he was a member. In one footnote, he also described a study published by Brazilian physician José de Pinto Azeredo (176?–1810) in Jornal Encyclopedico de Lisboa, in March 1790, in which he described the first measurements on record of changes in oxygen levels between more built-up areas and areas with more tree canopy in Rio de Janeiro. Pereira added so many footnotes that the page count in the translated edition nearly doubled.

Historians have yet to reach a consensus on where and when the first cachaça was produced in Brazil. Its origin has been ascribed to at least three different regions and periods: the feitorias, or trading posts, of Igarassu and Itamaracá island in Pernambuco, between 1516 and 1526; the seaside town of Porto Seguro, Bahia, in 1520; and São Vicente, a coastal town in present-day São Paulo State, between 1532 and 1534. In 1649 the Crown banned the selling of cachaça—then known as “honey wine”—when it began to out-compete wine and grape brandy brought from Portugal and even to be used as a surrogate currency in the colony. In his doctoral thesis, completed in 2005 at the University of Campinas (UNICAMP), Alex Varela, a professor of history at the Federal University of Rio de Janeiro, described how Brazilian cachaça became an important currency in African slave markets in the seventeenth century. “In Angola,” he notes, “cachaça became a popular replacement for African beers and malafo, a fermented spirit used in religious rituals, known to the Portuguese as “palm wine” as it was produced from different types of palm trees.

Cachaça—then known by the name of “cagaça” or “froth”—was a spirit generally associated with African slaves. “Fearing civil disturbances caused by drunkenness, the Crown attempted to curb drinking among slaves, but largely ignored the drunken excesses of farmers themselves,” says Lucas Endrigo Brunozi Avelar, a historian at the State University of Roraima. But the Portuguese government eventually used taxes on cachaça to offset lost revenue from mining, explains Avelar. “In the nineteenth century, farm management handbooks recommended distributing cachaça after a day’s work and before the rollcall, in order to keep the peace in the slave quarters,” he says. 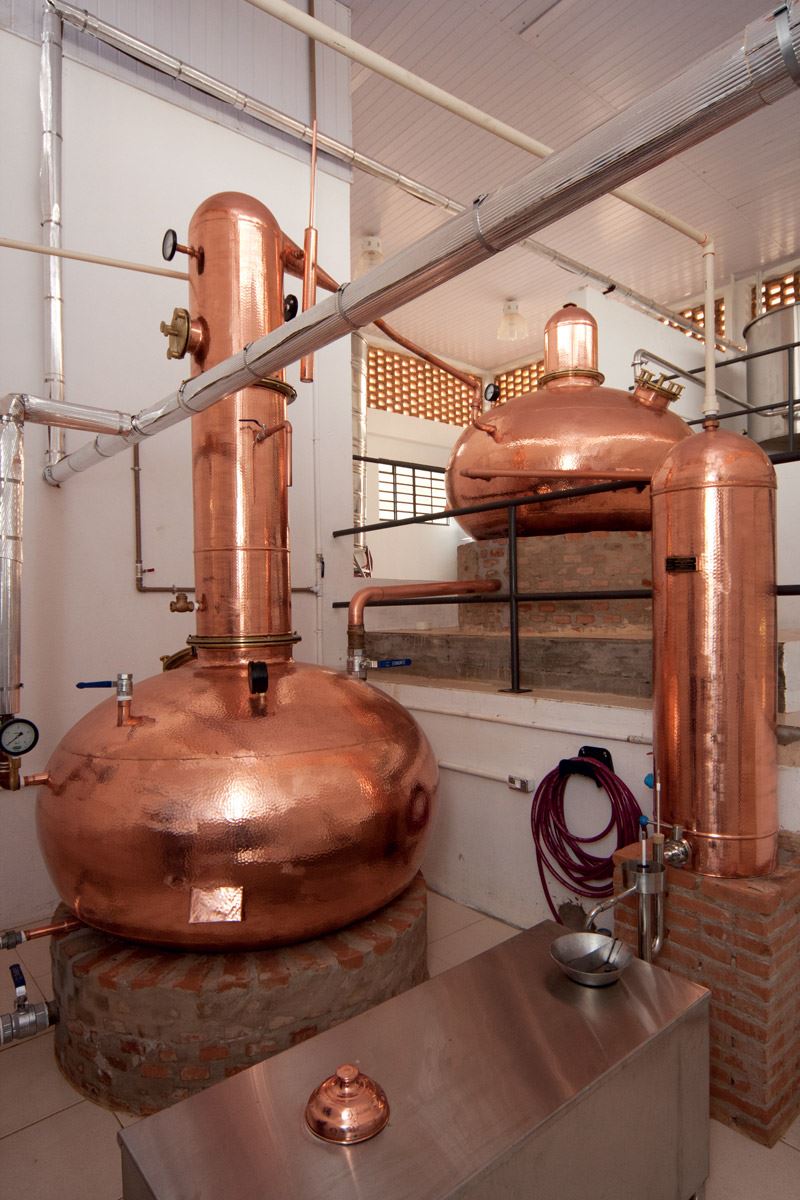 There were many other popular uses for the spirit—which is 98% water and ethanol, with the remaining 2% comprising around 300 different substances; cachaça’s flavor derives from compounds such as acetic acid and isoamyl alcohol, while its fruity and floral aroma is produced by ethyl acetate. Known in Brazil by nicknames such as “water that birds won’t drink,” “white coffee,” caninha, marvada, and mé—among 400 other nicknames cataloged on the Mapa da Cachaça website —cachaça was believed to be a potent remedy for a variety of ailments. It was used to treat fever and shaking chills caused by malaria, to clean wounds, to counter the effects of snakebites, to keep warm on cold days and cool on warm days, as an offering to deities or spirits, and to cheer parties.

The methods for distilling cachaça have changed little over the last five centuries, but enough to reduce production time from three days to just four hours. In 2019, the Brazilian Ministry of Agriculture and Food Supply (MAPA) recorded 951 registered cachaça producers, largely (44%) in Minas Gerais, and 3,648 registered brands of Brazil’s most widely consumed spirit (with beer remaining the most widely consumed fermented beverage). Although used synonymously, the terms cachaça and aguardente refer to different spirits. Under a law enacted in 2006, cachaça must have an alcohol content of 38%–48% by volume at 20 degrees Celsius, while aguardente has an alcohol content of 38%–54%.

“Today’s cachaça producers still value tradition but are more open to innovation in the production process,” says Alcarde. Double distillation, for example, has been a welcome improvement to eliminate chemical contaminants and reduce the content of an undesirable compound, ethyl carbamate. “Ten years ago, the regulatory limit for carbamate was higher than for most spirits,” he says. Since 2012, Alcarde has administered training programs on production techniques at ESALQ, attended by cachaça makers.

There is still room for further improvement in production methods, explains Alcarde, who is currently doing research to select new yeast strains for fermentation, a critical process stage in which alcohol and other compounds that impart flavor and texture are produced. “If we’re successful,” he says, “the fermentation process will become much more consistent, preventing variance in product quality.”