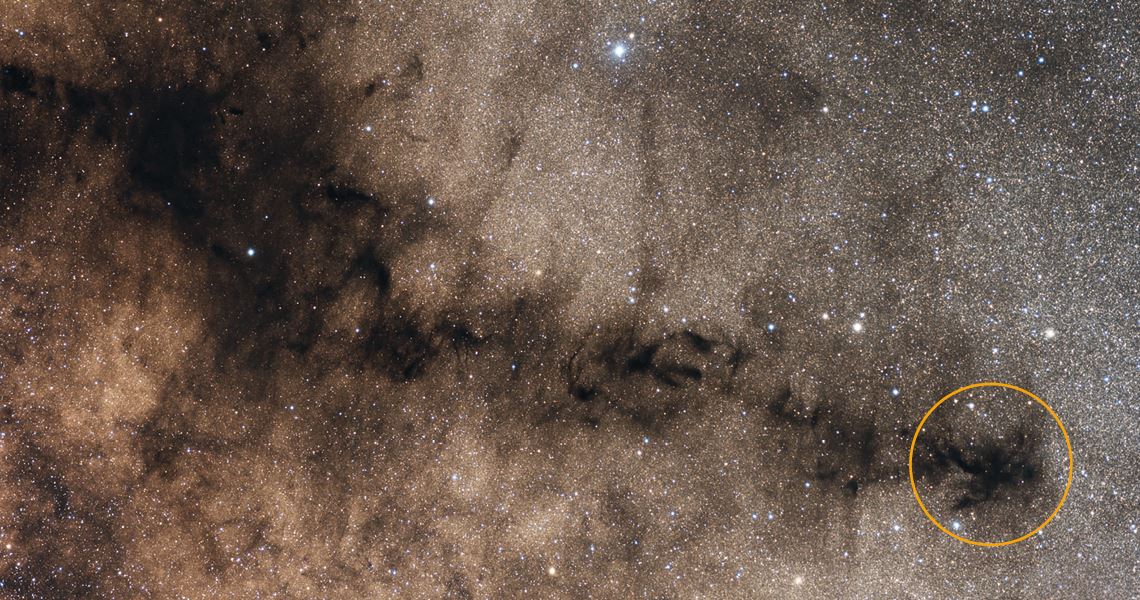 The Pipe Nebula and the cluster Barnard 59 (feature)

High-definition images obtained recently by the network of radio telescopes of the Atacama Large Millimeter/Submillimeter Array (ALMA), in Chile, are revealing unprecedented and unexpected details of the initial phases of formation of the stars and planets: the simultaneous creation of the two types of stars in a system sustained by a mother cloud of gas and dust. To this point, observations suggest that the stars originate first and the planets appear later when the cloud of material that formed the star and its protoplanetary disk have already dissipated. “The greater sensitivity of ALMA is causing us to rethink the classical models of the formation of star systems,” confirms Brazilian astrophysicist Felipe Alves, which is doing his post-doctorate at the Center for Astrochemical Studies at the Max Planck Institute in Munich, Germany. He is the first author of a study describing the phenomenon and which was published in November in the magazine The Astrophysical Journal Letters.

Since 2015, Alves has been using a network of equipment installed in the Chilean Atacama Desert to observe star formation—the so-called protostars—and now has identified the birth of a new star system in a region of space located 530 light-years from Earth, in the direction of the Ophiuchus constellation. Known by the acronym [BHB 2007]1, the star-planet pair is close to more than a dozen protostars in the Barnard 59 cluster, a fragment of a much larger cloud of gas and dust called the Pipe Nebula.

The nebula is an old one known by Alves. In 2008, he mapped the magnetic fields of the region, using the equipment of the Pico dos Dias Observatory of the National Astrophysics Laboratory (LNA) in Minas Gerais, working in collaboration with astrophysicist Gabriel Franco, of the Federal University of Minas Gerais (UFMG), with whom he is collaborating on his current research. Alves and Franco have already observed in Barnard 59 an interesting pair of protostars connected to each other by filaments, the object [BHB 2007] (see Pesquisa FAPESP issue no. 285).

Studies by other groups have already estimated that the [BHB 2007]1 system is approximately one million years old. This is the amount of time that, according to observations and theoretical models, a star with similar mass to that of the Sun would take to organize around itself the disk of gas and dust from which the planets arise—the protoplanetary disk. In the majority of protostar systems already observed, the formation of planets is more clearly visible when the protoplanetary disk is totally isolated from the cloud of gas and dust from which it originated. This is not the case with [BHB 2007]1. “We found giant filaments of gas and dust from the mother cloud, falling in the direction of the disk of this object,” says Alves, who made the observations in partnership with researchers from the United States, Spain, France, and Chile.

In line with the classical star formation theory, these stars are appearing in a more dense and colder region comprised of enormous clouds of gas and dust. In these regions, the gravitational force is stronger than the agitation of the material particles, causing them to cluster. As gravitational collapse compresses the material at the center of the region, their atoms begin to fuse, generating new chemical elements and the light of the future star. Simultaneously, the collapse causes the gas and dust that falls in the direction of the center of the protostar to spin progressively faster, creating a disk around the star—the circumstellar disk. Until now, the models considered that the planets only began to form after the complete dissipation of the mother cloud that feeds the slightly more mature disk, when the latter has already gathered the ideal conditions for planet formation and receives the name protoplanetary. The observations of ALMA, however, indicate that filaments of material can continue connecting the mother cloud to the protoplanetary disk, even after the initiation of planet formation.

“It is big news,” confirms Othon Winter, a physicist who specializes in orbital dynamics at São Paulo State University (UNESP) in Guaratinguetá, Sao Paulo, and who studies the evolution of the solar system. “The studies of protoplanetary disk evolution should take into consideration the additional material that comes from the molecular cloud, producing effects that have never before been considered in the formation of planets.”

The protoplanetary disk of the object [BHB 2007]1 has a diameter of about 220 astronomical units (Ua)—one astronomical unit represents the distance between the Earth and the Sun. Inside this disk, astrophysicists have observed a large cavity in the form of a ring, with much less dust, located in a strip that is 20 UAs to 90 UAs from the center.

ALMA’s observations, combined with those of another radio telescope network, Very Large Array (VLA) in the United States, indicate that there is an object inside this ring with a mass of 4 to 70 times greater than that of Jupiter, the largest planet in the solar system. Researchers are not yet certain if this object is a giant gaseous planet, such as Jupiter, or a brown dwarf, which is a star that does not have sufficient mass to shine.

“We hope to soon observe other properties of the protostar with ALMA and possibly detect direct signs of the planet or the brown dwarf,” says Alves, who suspects that the formation of both the main star and the gaseous giant, or the brown dwarf, are likely still being fed by the material from the mother cloud. “The way in which the solar system and the Earth were formed,” supposes the researcher, “may have followed an evolution similar to that of the protostars.”