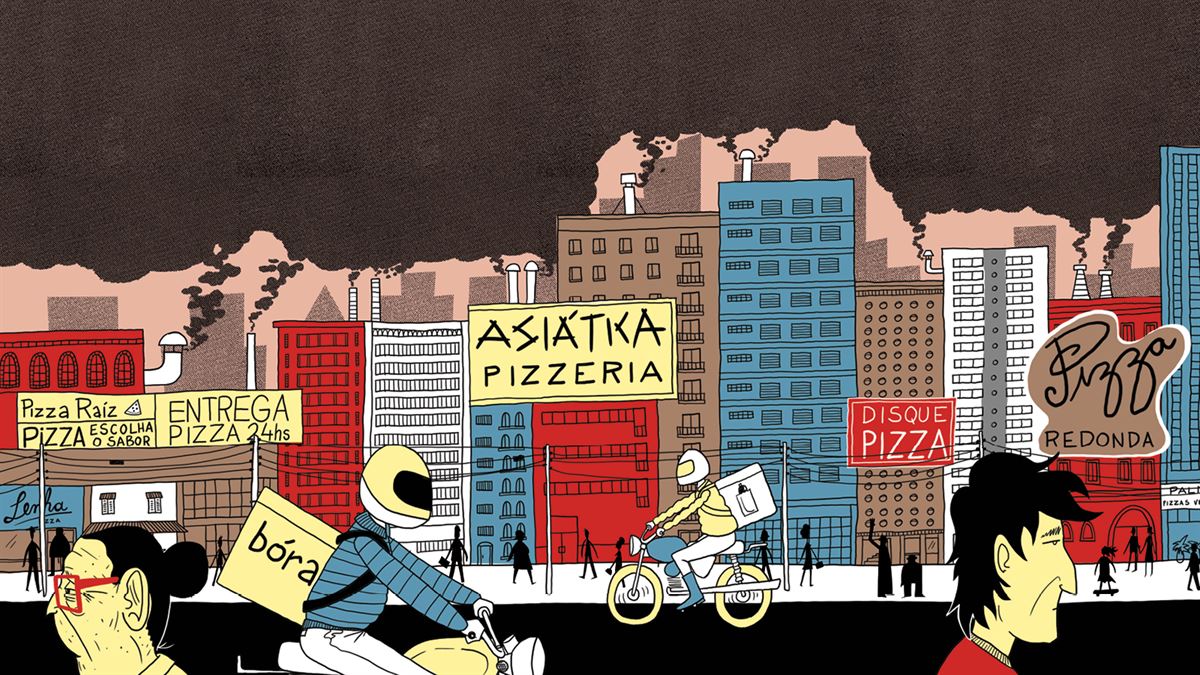 The wood ovens of 6,500 pizzerias in the city of São Paulo are a major source of air pollution. They release 117 tons of fine particulate matter every year, equivalent to 9.4% of the total emitted by motor vehicles in the Metropolitan Region of São Paulo. The latest air quality report from CETESB, the São Paulo state environmental agency, estimates that vehicles in the region release 1,240 tons of this pollutant into the air every 12 months. Emissions by pizzerias, meanwhile, were calculated in a paper published by a group of four Brazilian researchers and one Brit in the journal Environmental Science and Pollution Research in January.

Unlike other studies carried out abroad, which simulate the burning of wood or briquettes (compressed blocks of combustible biomass) in a lab under controlled conditions, the latest study was based on data collected from real restaurants. Measurements were taken at three pizzerias in the city center during operating hours. The scientists extrapolated these data to calculate the pollution produced by all pizza restaurants in São Paulo. It is estimated that roughly 1.5 million pizzas are produced in the city every day.

The researchers were surprised by the amount of fine particulate matter measured both inside the establishments and coming out of the chimneys in the outside environment. The concentrations in the latter averaged 90 times higher than inside the pizzerias, where levels reached 68 micrograms per cubic meter (μg/m³). Brazilian legislation establishes no limits for fine particulate matter emissions by pizzerias. In Germany, the maximum allowed inside restaurants is 25 μg/m³. “There are very few studies on this type of pollution, which may seem harmless, but the emission levels are significant,” says environmental manager Francisco Daniel Mota Lima of the Federal Institute of Pará (IFPA), lead author of the paper, which he worked on while at graduate school at the University of São Paulo (USP).

The numbers recorded inside the São Paulo pizzerias indicate that both customers and employees are exposed to dangerously high levels of the pollutant. “The high concentrations caught us by surprise,” says physicist Regina Maura de Miranda, from USP’s School of Arts, Sciences, and Humanities (EACH), coordinator of the team that carried out the study. According to CETESB’s press office, pizzerias are not subject to environmental licensing because of their relatively low pollutant emission potential. The environmental agency also notes that monitoring indoor pollution is not part of its remit. One suggestion for alleviating the problem is to ensure restaurants are well ventilated.

Fine particulate matter is composed of solid or liquid particles with average diameters equal to or less than 2.5 micrometers (1 micrometer is equivalent to one millionth of a meter). This form of pollution is extremely harmful to human health. Studies have linked high concentrations of fine particulate matter in city centers and industrial areas with a greater incidence of diabetes, lung cancer, heart and lung disease, and other respiratory illnesses. These compounds can also contribute to global warming and climate change. Between 20% and 30% of the particulate matter in the pizzerias was formed of black carbon, the main chemical component of soot and one of the pollutants that absorb the most radiation in the atmosphere. The study also examined the chemical composition and morphology of the particles released into the atmosphere.

Since two of the pizzerias burn eucalyptus logs in their ovens and one uses briquettes, the researchers tried to analyze whether the type of wood used had any impact on the amount of pollution emitted. The data suggest that wood briquettes may be less harmful. “The various chemical elements that we found in the particle analyses are associated not only with the wood and briquettes, but also with the pizza ingredients, such as table salt. This aspect needs to be studied further,” says Miranda.

As well as the type of material used in the ovens, other factors taken into account included the location of the pizzeria, the number of pizzas produced per day, and the height of the chimney. One of the pizzerias in the study had a much taller chimney than the others, at 25 meters high. The concentration of pollutants emitted externally was greatest at this restaurant, probably because the smoke is released at a faster speed. It was not possible to determine with certainty which factors had the greatest impacts on the results.

The high levels of pollution both inside and outside the pizzerias in São Paulo does not necessarily mean that their days are numbered. “There are measures that can be taken to alleviate the situation. There are various pollution control devices that can be used in the chimneys to reduce emissions,” explains the USP physicist. “Some restaurants already use them, and they are effective.” According to the scientist, the research group is now studying other types of commerce, such as bakeries and steakhouses, to determine the amount of pollution generated by other sources in the city of São Paulo and elsewhere in the country. “The best flour in Pará is produced in what are known as oven houses, powered by burning wood,” comments Lima, who plans to study the pollutants released by these establishments.